I think because the big, public failures of GFC1 haven’t repeated the public has been given a false sense of stability. While the idea of subprime mortgages being responsible for all that went on during 2008 has remained generally accepted, there was for a time an awakened recognition that big financial firms were doing complicated things in the monetary shadows that they don’t teach you in the textbooks. In other words, subprime, sure, but even if we accept that (and you shouldn’t) there was a lot more to the story.

When you examine it to any small degree beyond that cursory explanation, what you find is that subprime itself moves to the background and this shadow business takes over the foreground completely. It wasn’t the shadows which made subprime into a fatal flaw, it was instead how the complicated processes taking place in the shadows ended up being the near fatal blow which (intentionally) got mistaken for an outsized reach no matter how funky subprime “toxic waste” had ever become.

Among these shadowy factors was, as always, collateral. Thus, since there haven’t been any more Lehmans or AIG’s, some might assume any collateral weakness has been expertly handled and successfully put to rest for all time. Official policies and descriptions only add to the confusion (because policymakers and regulators are themselves highly confused by these same issues).

Collateral is used for all kinds of things, necessary funding regimes that extend beyond plain vanilla repo. There are derivatives chains as well as pyramids of securities lending. The more complex any firm’s balance sheet, the more interconnected and self-reinforcing any of them with more than a trivial potential for contagion.

In that sense, both AIG and Lehman were good examples because by being the most public US failures they briefly (too briefly, sadly) exposed these flaws and chokepoints (should you honestly wish to see them). Because AIG had been “bailed out”, the government dryly reported on some of these. If you look in the second appendix of any GAO report to Congress on AIG’s participation in TARP, in those footnotes you’ll find interesting and important nuggets like this:

Those “costs” would have come in the form of termination payments for certain derivatives contracts as well as additional collateral calls – collateral to which the wayward insurance company by May 2009 no longer had access.

When the GAO wrote this particular report in early 2010, these calls and costs were merely theoretical (with the government’s TARP support and the Fed’s Maiden Lanes, there was no further need for more downgrades).

Before then, it hadn’t been just been theoretical for AIG. First, its securities lending business, AIG Securities Lending (AIGSL), had been hit with actual ratings downgrades in May and June of that crisis year. Quite naturally, it would experience a modest (relative to what was coming) collateral run as a result – where counterparties demanded collateral they’d “lent” to AIG back from the troubled sub as ratings agencies illuminated the firm’s weakness via downgrades.

Then Lehman; on Monday, September 15, 2008, all three ratings agencies – Moody’s, Fitch, and S&P – downgraded AIG to below AA- (or equivalent). The immediate consequence was not survivable and ultimately systemic; according to published documents, calls for collateral on various CDS instruments outstanding in AIGFP’s portfolios blew out, reaching an unmanageable $32 billion.

That was an increase from demanded collateral of “only” $8.6 billion the prior Friday just three days before.

AIGSL had been the source of most of the collateral which had underpinned all these other money dealing activities, including the systemically important regulatory capital relief for which especially Europe’s banks had been managing their balance sheets. With this particular sub shut down, there was nothing the firm could do to maintain a sufficient collateral profile to keep everything else afloat.

It wasn’t losses that nearly brought all these pieces down; instead, severe collateral interruption. Being shut out from the various ways these shadow participants tap the general collateral pool there was no other way to recover; AIG’s various balance sheets were together insolvent. Thus, rescue.

While it hasn’t produced the same front-page news since 2008, this remains a huge problem nonetheless. Financial firms have gotten better at managing their liquidity and collateral profiles, often at the expense of pliability and efficiency throughout the systemic collateral streams (bottleneck). 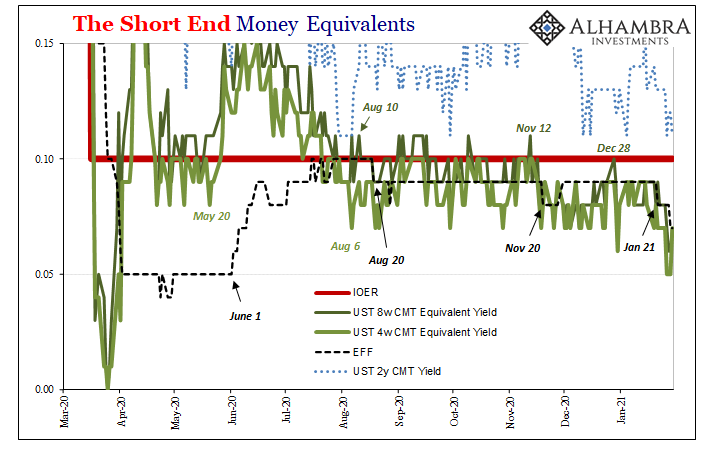 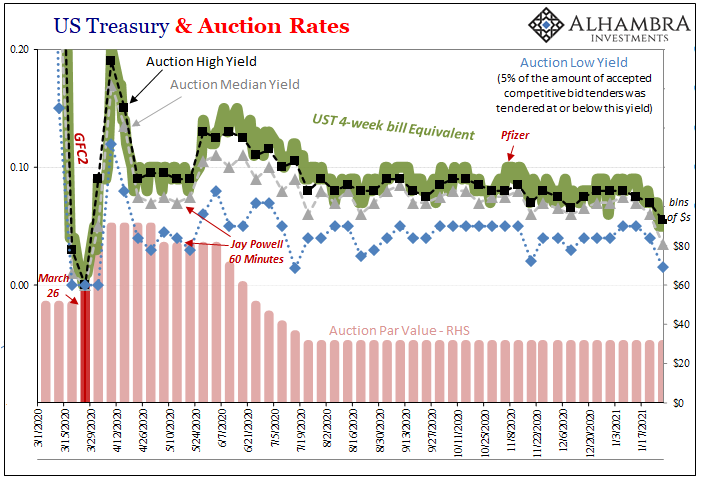 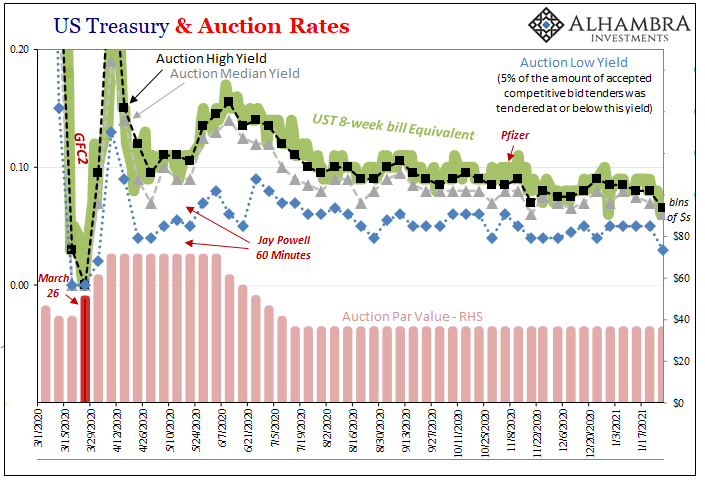 This brings us to rising T-bill demand in late 2020, falling T-bill yields the result. The collateral case was proved beyond any doubts last March; the bottleneck happened, made worse by the Fed’s not-QE stripping repo markets of bill collateral available for use (and re-use), which led to GFC2 being far more destructive than it “needed” to be.

But with bill supply having been shrunk back down last June and July, the system has less of a margin for another potential bottleneck – a situation you had better believe collateral-users are keenly aware. Should concerns materialize, heightened demand for collateral would be the expected response.

Geopolitics is one. I’ve heard from a few (too many) sources lately about the Chinese taking some specific action. Others refer perhaps to the Israelis doing something against Iran. I’m not nearly informed enough to speak intelligently on those possibilities.

However, there is another potential factor which does fall within the realm of shadow money and collateral: ratings downgrades.

Many people, maybe most of the public, have gained the sense that last year, while bad, was easily surmounted by the combination of Fed and feds’ thirteen-digit rescues. That whatever the downside, it had been successfully papered over by combined interventions (including big ones outside the US) which essentially avoided any further consequences. Get rid of the pandemic, the promise of vaccines, and the path to normalcy becomes more than clear perhaps to the point of being inevitable.

If only it would be that easy. Already the original “V” scenario has died a merciless death at the hands of an “unexpected” summer slowdown. But beyond a global economic rebound continuously coming up short, there remains unaccounted-for harm including potentially serious financial harm.

Once the government stops its direct payments, what might be uncovered so far as investment losses particularly in the same financial setting? This is why, as Fitch put it recently, there remains substantial uncertainty/anxiety about what might come next out from their ratings models. Reporting a little over a week ago:

A newly-updated interactive country-by-country map of bank rating trends from Fitch Ratings shows that nearly 60% of bank ratings were still on Negative Outlook at end-2020, with just a marginal decrease from end-1H20. The proportion of ratings on Rating Watch Negative, reflecting near-term risks, fell significantly to just over 1% from 10% at end-1H20 but most of the affected ratings ended up on Negative Outlook. There were virtually no ratings on Positive Outlook or Rating Watch Positive. 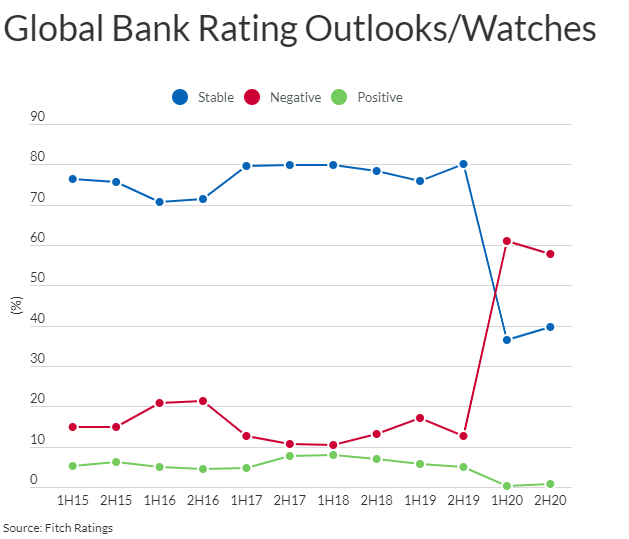 The report goes on to cite Latin America, a place where the dollar hasn’t “fallen” against its currencies nearly as much as against others, as the region with the highest proportion of possible downgrades – mostly because Fitch’s models, like S&P’s or Moody’s, assigns positive contributions from central bank and central government “aid” and potential aid in North America and Europe.

In Europe, regulators, including the top bank watcher at the ECB, have been encouraging banks there to purposefully dip into their “capital buffers” because, largely, they haven’t yet experienced much so far as loan losses have been concerned. And the ECB, like ratings agencies, are concerned because there will be losses.

The ECB said overall capital buffers remained “ample” but warned of the risk of a sudden surge in loans that go unpaid as government support measures for businesses, households and banks are lifted.

“Significant uncertainties remain…(and) data indicate an ongoing need for vigilance and continued supervisory challenges in several critical areas, relating in particular to the risk of a sudden increase in non-performing loans,” the ECB said.

One surefire way to trigger ratings downgrades, especially outside the US, Canada, and Europe, is for NPL’s to suddenly start showing up in anyone’s books.

Putting this altogether, what might happen if the economic recovery stumbles, or if it has already stumbled enough, because, say, China’s economy doesn’t contribute what everyone seems to think it is guaranteed to underwrite of a global economy? Such a thing might move Fitch and its cousins to start moving banks in EM economies off negative watches and onto active downgrade considerations.

This might then lead especially some of the weaker dollar-borrowing entries to suffer increased demands for collateral. Thus, it might stand to reason that anticipating such a possibility, especially if the anticipated possibility becomes more and more anticipated as the global rebound looks less like recovery, it would raise demand for the best quality collateral in advance; higher perceived risk, greater demand for collateral.

Build up collateral “reserves” for these potentially heightened demands. 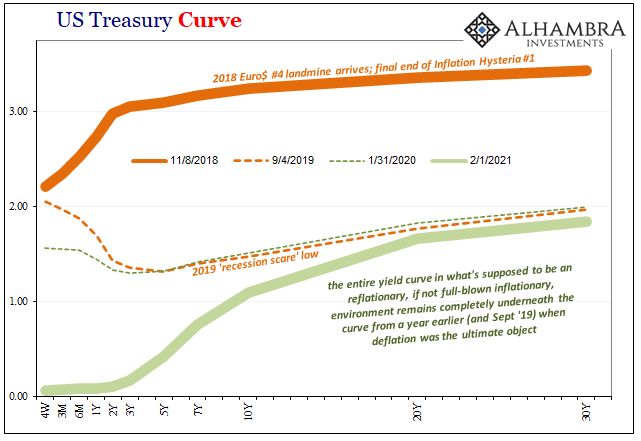 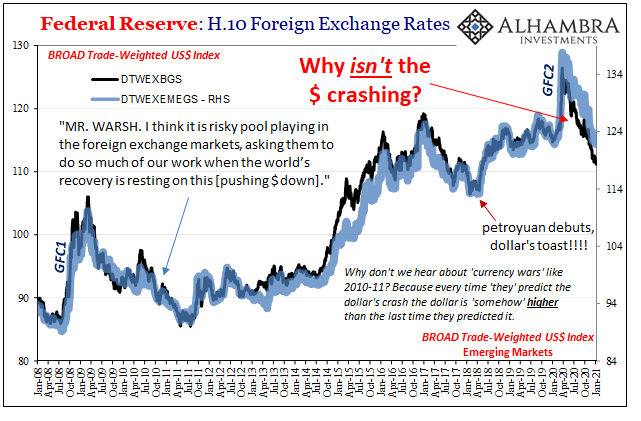 Although mainstream commentary would prefer it if falling short-term money and T-bill rates were the product of positive consequences from future TGA draws – “too much” money – it may be instead that looming financial consequences for an economy coming up way, way too short of recovery might unleash first in the liquidity and collateral of the shadows.

We could explain T-bill and collateral demand in that sense quite easily. After all, AIG wasn’t some isolated instance, limited to a singular epoch in time, just a more extreme example of how things worked back then and continue to do so today. And while there’s not been a major repeat in the dozen years since, you shouldn’t let that fool you into believing these chokepoints have been either fixed, handled, or expunged.