There is another part to the upcoming July debt ceiling constraint. On the one hand, as noted last week, the Department of Treasury will have to draw down its checking account balance it holds at the Federal Reserve (TGA). There are, as there have always been, consequences for doing so insofar as bank reserves are concerned. These are extrapolated into more than they ever become (especially the expected inflationary effects which don’t ever show up). 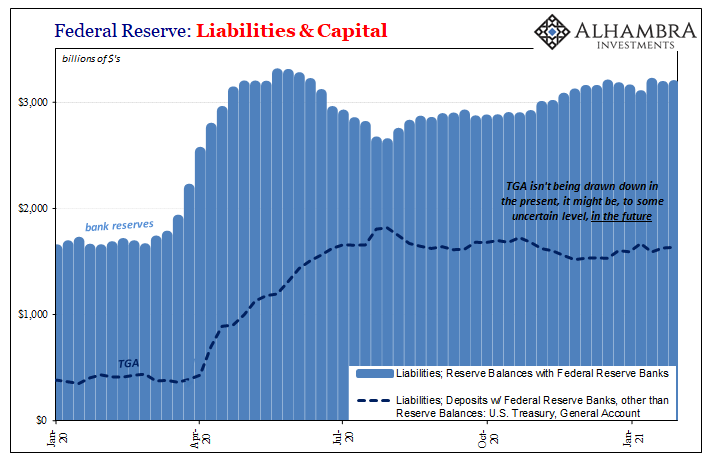 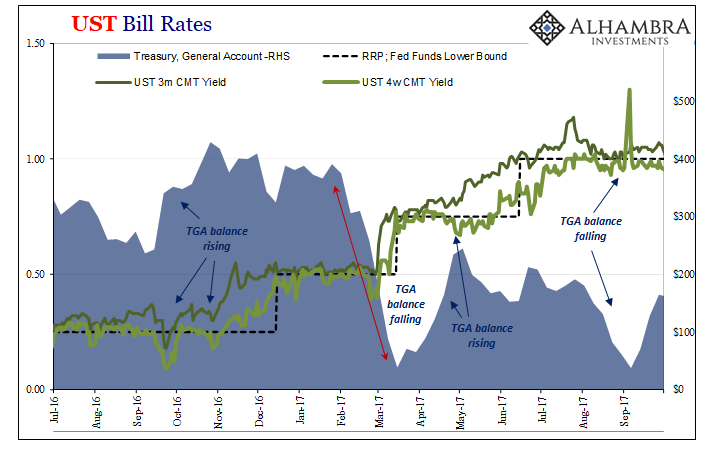 The other side of TGA is something called refunding. Nothing more than a fancy word for giving back what the government has borrowed, it can sound ridiculous in this prolonged era of unreasonable deficits stretching far out into the future. Refunding does happen, though, when the government actually borrows less during an upcoming quarter than perhaps it did during the three-month period just finished.

More so quirks of statutes and technical issues than anything else, including the debt ceiling, according to the latest Quarterly Refunding Statement written up and released by Treasury last week, the feds are going to begin making adjustments to their borrowing/debt issuance schedule.

As a start, two of the four remaining CMB (cash management bills) tenors will be phased out starting this week. One final issue each of the 105-day CMB (15-week) and the 154-day CMB (22-week) will be auctioned on Wednesday. Following, the entire combined $55 billion par will be refunded back into the marketplace (while note/bond auctions will be maintained at the same levels). 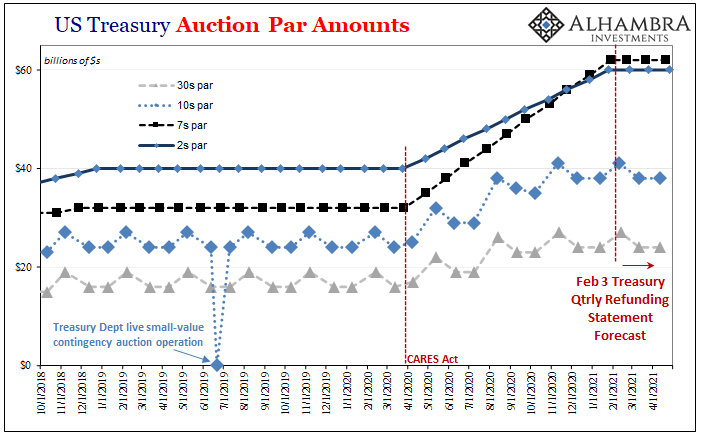 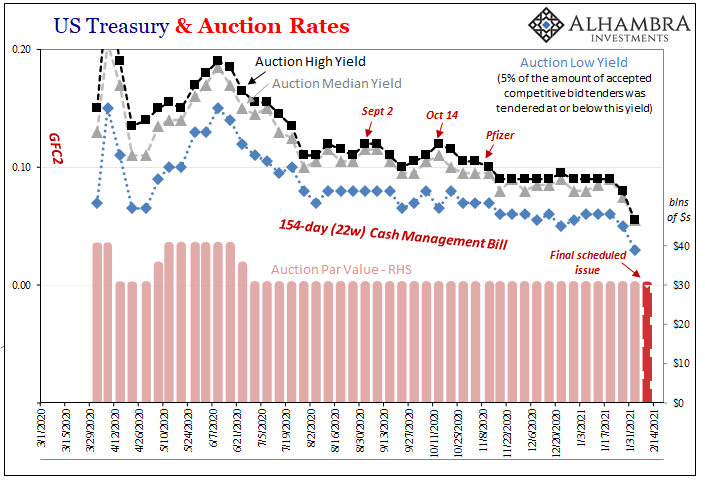 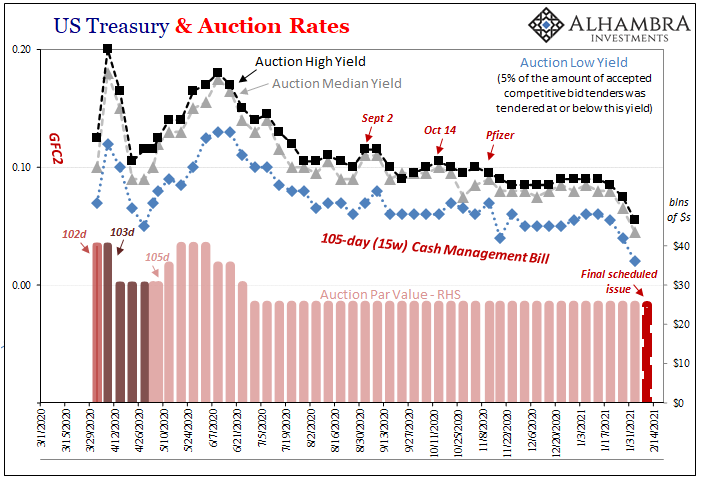 That’s a sizable chunk to be taking out of the bill market where demand for these instruments has been visibly high going back months. Hardly anyone had noticed their continuous decline, distracted by the rise in long-end yields somewhat (only somewhat) more consistent with the reflation narrative being fanned by vaccines, “stimulus”, and other assorted positives.

In fact, even if we attribute that initial drop in bill yields (all of them) back last summer to the first wave of restricted supply, it still doesn’t account for lower front end rates (which includes more than bills, since short-end notes have been steadily rising in price, too) beginning September-October then moving further early in November.

In other words, when accounting for the supply factor in 2021 there’s still the matter of high demand for bills ending 2020. 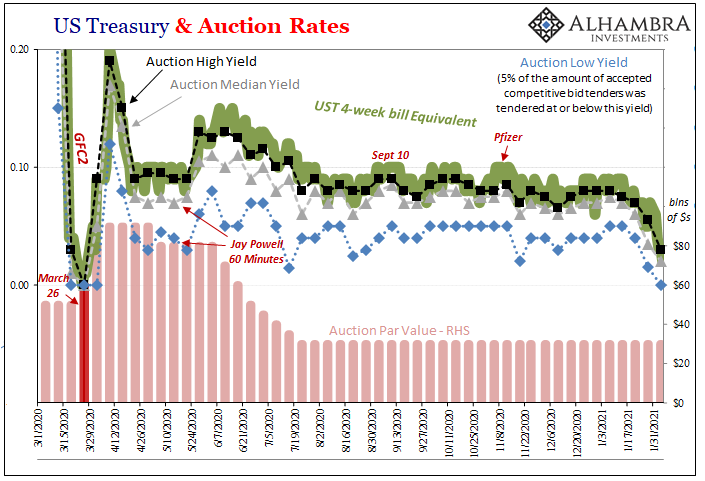 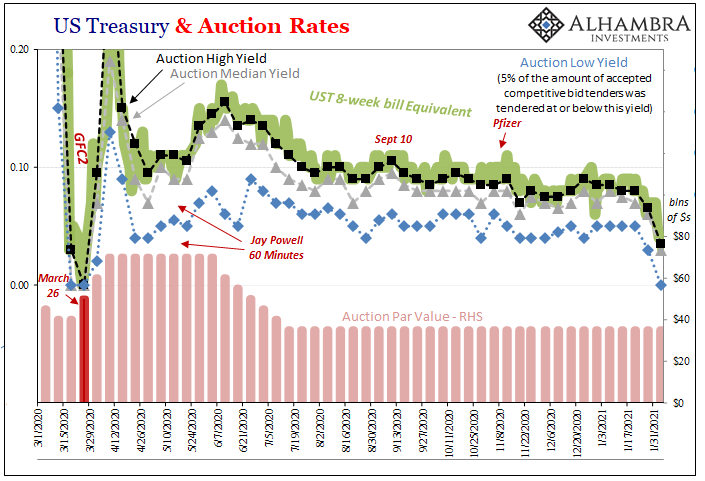 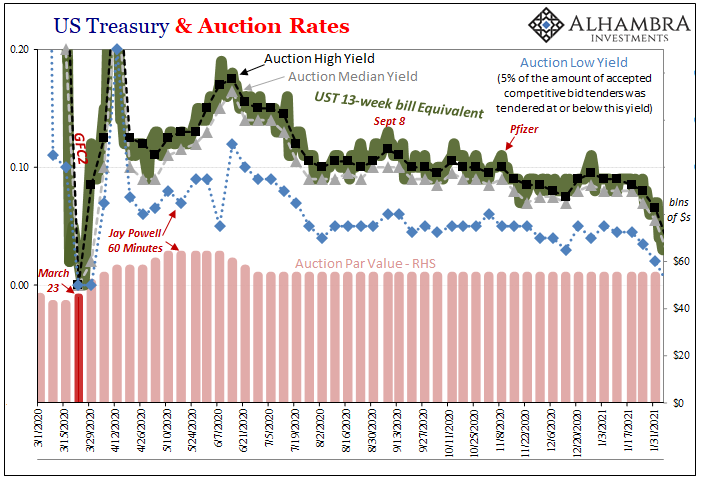 The more extreme incline since the start of 2021 has merely forced some people to start taking notice.

Where “should” bill yields trade? A complicated, nuanced question, their general range is determined by a mix of factors. The shortest instruments are money equivalents and therefore the returns on them compared to alternatives like repo and even fed funds; in terms of the former, buying a T-bill is almost the same thing as lending cash in repo and getting the same bill for collateral. 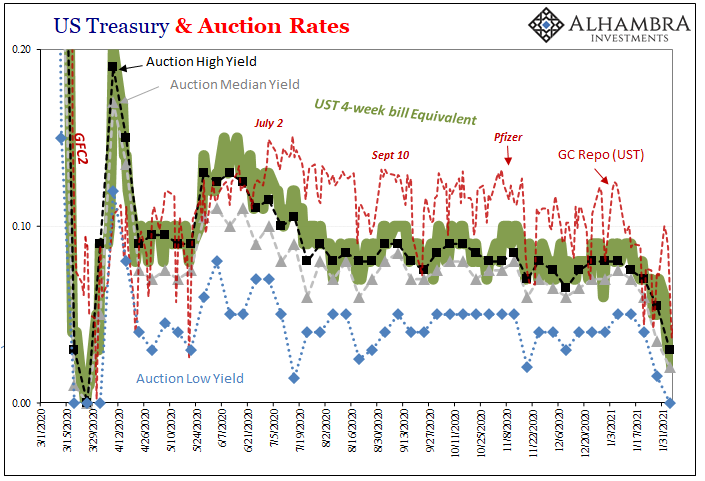 There’s also the reverse repo. The RRP is the Federal Reserve’s supposedly hard floor for wholesale money. Instead of lending cash to the repo market collateralized by a T-bill, or buying one from the federal government, the central bank will currently “pay” investors 0.0% “interest” for basically the same thing. In theory, then, bill yields, like repo rates, shouldn’t end up below RRP.

The Fed, in one of its academic theory papers, explains why:

In theory, as with the IOER rate, the ON RRP rate set by the FOMC would be expected to establish a floor on short-term interest rates, particularly if ON RRPs are available in sufficient quantity to satisfy demand at the ON RRP rate. Thus, the Desk’s July 2013 presentation on the use of ON RRPs focused on a “fixed-rate, full-allotment” facility—that is, one that would offer ON RRPs without limit at the fixed rate set by the FOMC. With such a facility in place, ON RRPs would always be available to counterparties as an alternative to other investments, so counterparties that can invest in ON RRPs generally should be unwilling to lend elsewhere at lower rates. [emphasis added]

The RRP is a floor, remember, but in same way you’ll recall the Fed’s experience with “floors” in general. Therefore, the word “generally” is doing a lot of heavy lifting for the idea highlighted above.

Besides, we need only look back a few years from something similar. Again, TGA being drawn down, and bill issuance mildly adjusted, both in the early and middle months of 2017 were blamed for unusually low rates. Yet, while “globally synchronized growth” raged all around, this happened at the end of June:

You might be forgiven, then, for thinking that last week’s bill trading wasn’t really noteworthy, declining only close to the 75 bps floor. The problem for the Fed, as well as all the rest of us (indirectly), is that they changed the RRP “floor” almost two weeks ago to 100 bps.

In other words, the 4-week rate is not only well below the current “floor”, it is now threatening to sink below the last one, too. To make matters more interesting, in trading today the 3-month treasury bill yield was quoted at 95 bps, joining the shorter one in embarrassing the Fed.

There was clearly something “special” about T-bills that goaded the marketplace into its general, sustained purchasing so that all throughout this summer of Reflation #3 there was this sense of something amiss. It was supposed to have been smooth sailing into inflationary acceleration and global liftoff, why so much obvious demand for bills? 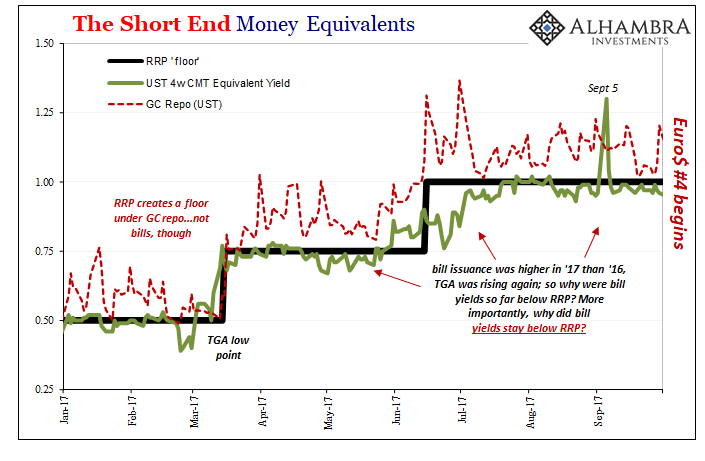 Hardly anyone noticed because these plumbing issues aren’t frontpage sexy enough. Instead of realizing the implications so far as collateral might’ve been concerned, inflation hysteria began to build and proliferate in its place. Remember, too, which one actually dominated 2018; it sure wasn’t inflation (and a crashing dollar).

The reason was simply this:

To put it bluntly, the Federal Reserve is starting to get the idea that maybe it’s not the center of the money market universe, and may only be one factor among many others (none of which policymakers seem to understand, but some may be getting closer to). It’s one thing to write about it in terms of basis swaps of one kind or another, even the GC repo rate that for almost the whole last ten years has been out of whack. But to find it in the 4-week treasury bill (now 3-month, too) and to such a huge degree is a direct and negative commentary on the RRP and thereby the idea of “rate hikes.”

It doesn’t say much for “too much” money and another round of “abundant reserves” in 2021, either.

What we see in the bills auctions and their secondary market data is the same kind of sustained high demand; so much demand that over the coming weeks it could push yields on them below both the zero lower bound (again) and the RRP (also again). In other words, a fragile system in collateral spilling over into reserves, money, and bills just as the Treasury takes more of them out of circulation (just like Jay Powell’s not-QE had done between September 2019’s repo warning and March 2020’s unnecessarily destructive collateral bottleneck).

Supply factors, you bet. But there’s more to it than that.

By the autumn of 2017, all the system needed was a low-grade spark to begin the exit from reflation. Fragile. Too many Treasuries? No. Not nearly enough bills.