Almost A Full Year of Tomorrows

Almost A Full Year of Tomorrows

The ISM reported its manufacturing index at highs on Monday, then today releases its non-manufacturing headline falling sharply. The result is an odd appendage to post-2008 history where these sentiment indicators are concerned; they are upside down to the usual configuration when it’s been more likely manufacturing suffers while services are to a greater extent immune to each successive suppressing downturn influence.

The most notable aspect of the non-manufacturing index has to be the specific segments most responsible for the sharp decline. The overall number had been relatively flat/sideways stuck around 57 or 58 going back to last June; and had bumped up slightly to 58.7 for January 2021 as government money hit the stores. The February reading instead comes back to 55.3, the lowest since the earliest days of reopening. 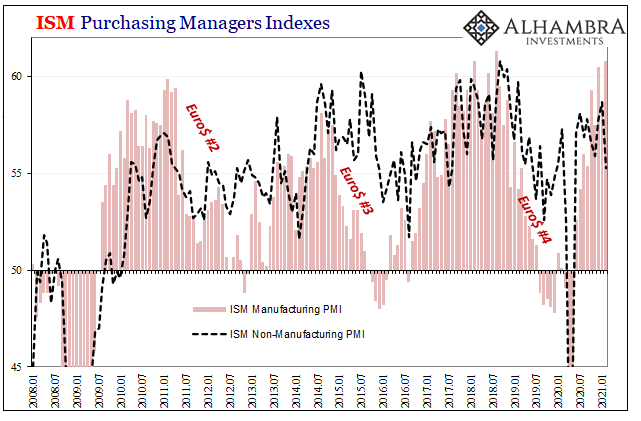 Not only that, around 55 places the number into the same context as mid-2019 (or early 2016) when the US economy, like the rest of the world, was facing increasingly serious downturn pressures.

Its employment subcomponent had indicated a contrary bump up in hiring of late (when compared to the more austere rebound in payroll estimates for these same few months) that likewise fell back in February. The subindex had reached 55.2 in January, the highest since late 2019 (so, not that impressive) only to decline to 52.7 last month.

New Orders, these apparently plummeted for reasons that aren’t well explained at the moment. Not only have COVID restrictions increasingly been removed, vaccines plus two full months of that $600 helicopter drop should’ve (if you believe in these things) produced more than a single January effect (as in retail sales). As for the ISM, forward-indicated orders in the service sector crashed by very nearly an even ten points (-9.9).

As of this February figure, the New Orders index stands at just 51.9, which, outside of last April and May, isn’t close to anything since 2016’s Euro$ #3 bottoming out. 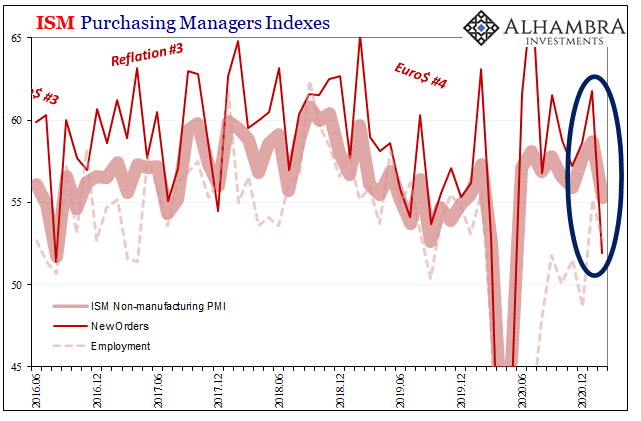 This is made all the more unsettling given the similar direction and intensity in Chinese sentiment of late.

As if determined to further corroborate this interpretation, private payroll processing firm ADP reports also today another serious shortfall in the employment rebound. First, the series had undergone benchmark revisions which stripped a few hundred thousand jobs from the series (meaning they probably never happened) and then reported that for the month of February private payrolls gained just 117,000 last month (compared to revised +195,000 in January and Economist expectations for about the same).

Around one hundred thousand would have been considered an alarmingly weak month before 2020; in this situation with the labor market struggling to gain any momentum, it’s yet another contrary signal (deflation, rather than the other one).

Like the ISM’s numbers, which even at their best last year and last month were never truly robust, this is an economy that continues to struggle significantly after having rebounded too little from last year’s incredibly deep trough. The summer slowdown instead breezed unhappily right through autumn, chilled out more during this winter, and now seem sufficiently poised to make its unflattering spring debut. 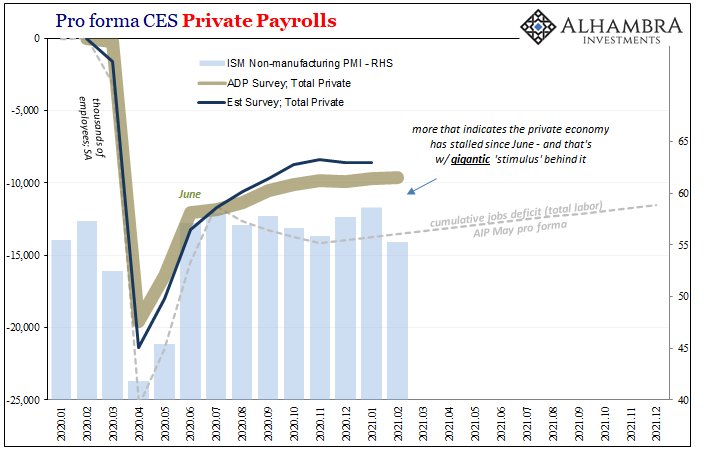 The economy of today is nothing like the inflationary recovery being pictured even in the current modest rise in LT Treasury yields (and ST, not LT, TIPS breakevens). These aren’t even extrapolating small positive trends into big ones anymore, like they may have last year; they are simply imagining a complete break scheduled for one of these coming tomorrows.

Much of it, perhaps all of it, is being set upon what people are imagining as the magic number: $1.9 trillion. Never mind that last year’s trillion didn’t come close. Forget the $600 pittance that seems to have only made a limited contribution specific to January.

The next one is the one that’s going to do it! According to mainstream interpretations which sound eerily similar to early 2018’s very nearly same predicaments. 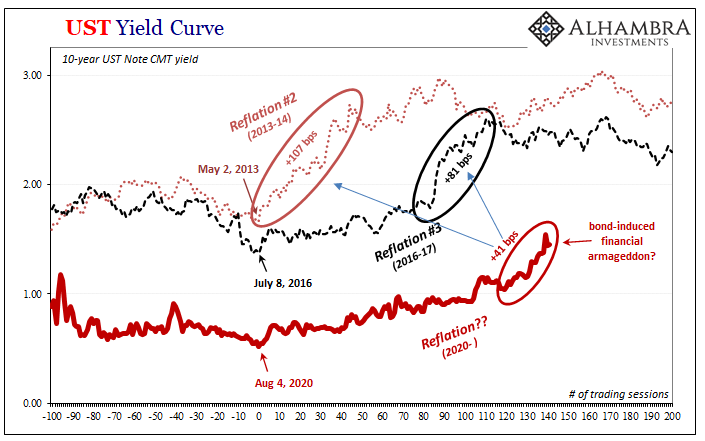 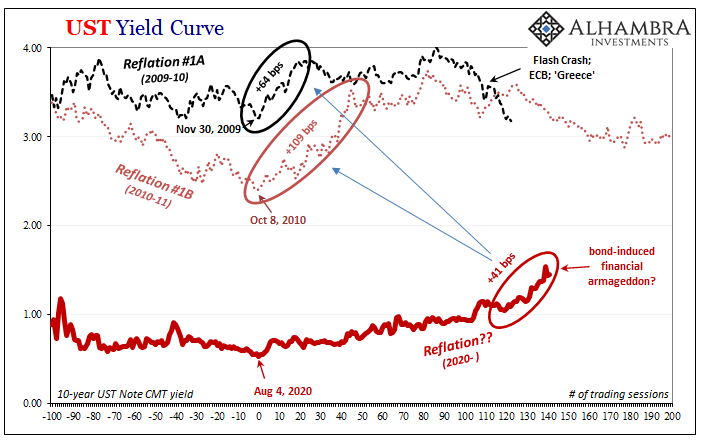 Maybe the most alarming aspect of this belief is this very simple faith in what’s only a number. It’s not that Uncle Joe’s Uncle Sam checks are somehow different in character this time, rather there’s this sole belief in their bigness.

Yes, there’s about a trillion and a half more than this helicopter drop, but that $1.5 trillion is the usual stuff (bailing out states and school districts, “saving” airlines, extending unemployment benefits yet again, loan guarantees along with the guaranteed systemic fraud and corruption throughout all of it). What’s really different is just the number, which is always just an arbitrary number.

That’s even true of the helicopter; with this upcoming third dose, it has become “normal”, too. As has an economy that – so far – doesn’t really respond to any of it. 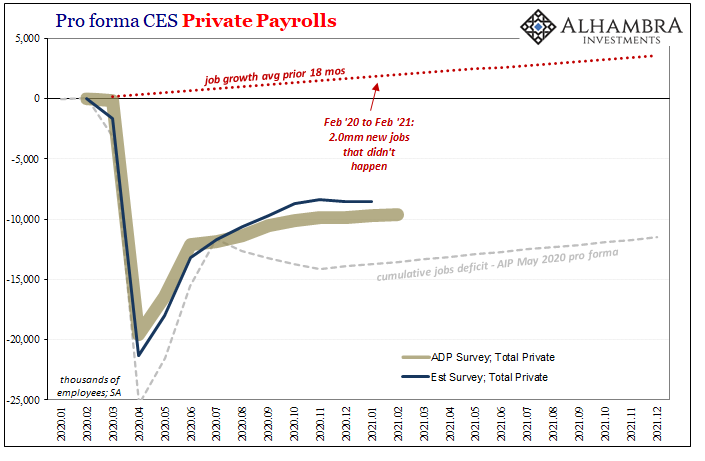 It is entirely possible that the US and global system (see: China) has suffered more long run, permanent damage than the federal government is able to cover with its TGA draws; this aid (rather than “stimulus”) has become necessary just to tread water due to so many lost businesses never coming back, lost capacity for those who survived, and therefore at least ten million jobs still short that can’t be just ordered up and purchased by pen.

Added to those are the now-2 million jobs that should’ve happened which never got the chance.

It’s a tightrope, near binary set of circumstances which I believe explains the lack of real volatility in the bond market. Compared to past reflationary periods, this one’s been utterly tame as if apprehension has only marginally softened with this new magic number; maybe this time it could work, sell a few LT UST’s, but let’s buy bills (and bid for dollars) because we’ve seen this crap before.

The latest data continues to indicate today’s economy really struggling (outside of what are outliers in manufacturing, not the first time that has happened; see: 2018). While tomorrow will almost certainly be better, all those tomorrows since the middle of last year haven’t been nearly improved enough.

And we’ve been hearing about tomorrow for almost a full year now.