The precursor event to yield caps being imposed in the United States actually took place during the Great Depression. Then – as now – officials at the central bank expected their “money printing” efforts to pay off in the reverse of deflation as the country shook off the effects of the collapse earlier in the decade. Way too late, the Federal Reserve had massively expanded its balance sheet, some willingly, mostly gold, creating what many worried might become rapid and uncontrolled consumer and wholesale price gains.

As I wrote on Friday, by 1936 monetary officials began to worry they’d done too much (we’ve heard this all before):

The volume of monetary reserves had massively expanded alongside the increase in business conditions from the previous trough. In fact, the money side achieved proportions like nothing else in the nation’s history; a period of growth so rapid it could scarcely be appreciated at the time.

Here’s what it looked like to Federal Reserve Chairman Marriner Eccles and his fellow Board policymakers; not all that different from what we hear about today. 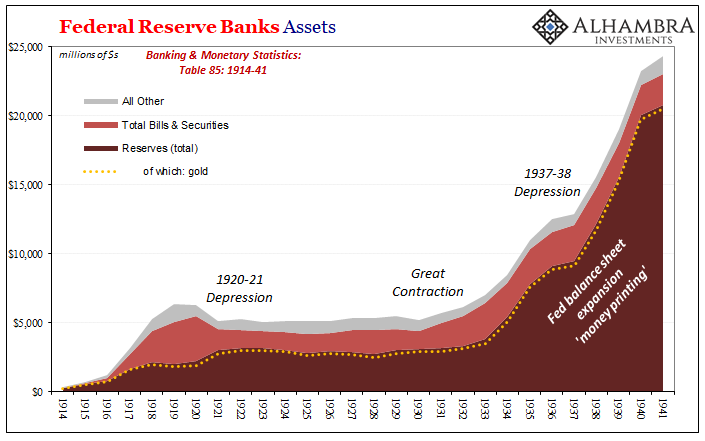 Always a day (or year) late, the Federal Reserve didn’t really get going until 1934 – and even then the vast majority of its monetary/balance sheet expansion was due to gold inflows from overseas (FDR’s devalued paper dollar after confiscation). This didn’t mean that policy hadn’t contributed; on the contrary, though belated, too, the central bank also bought a significant amount of government bonds (just dwarfed by gold).

In 1933, as FDR was inaugurated, the Fed’s Open Market operations had carried out extensive purchases; increasing the total of government securities (both notes and bills) from $641 million to $1.4 billion in just eight months. Though it sounds small to our 21st century ears, this bond buying, equivalent to what’s today called quantitative easing, was enormous in scale.

With the early recovery from the trough proceeding irregularly at best, even though wholesale prices were often rising rapidly (consumer prices were not tracked as closely), the Fed undertook a second round beginning in the middle of 1934, having paused only for about six months. This GDQE2, let’s call it, raised the volume of government securities in stock to $2.0 billion by March 1935.

Another $450 million were purchased from the market in October 1935, GDQE3, sold back to it in March 1936, and then mostly bought back the following two months April and May as the FOMC “fine-tuned” its operations.

Those “QEs” plus gold had swelled the asset side such that the Fed’s liabilities necessarily exploded upward, too. While officials literally printed a great deal of currency, Federal Reserve Notes, most of this monetary increase took the form of banks’ deposits held with the Fed (those account balances we call bank reserves). 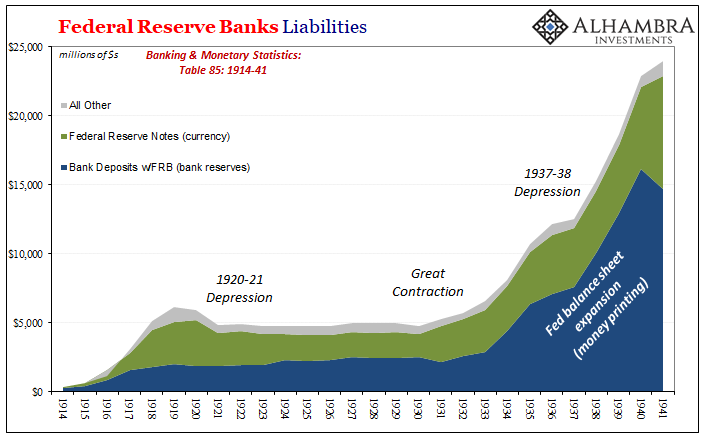 Looking at their own figures on their own balance sheet, policymaker grew nervous particularly with Treasury unwilling to do much sterilizing gold coming in. Again, by 1936, they’d grown seriously wary over inflationary pressures they’d become convinced were just about to escape their deflationary cage.

And why not? Did you see the Fed’s balance sheet? Tripling the level of bank reserves!

In August ’36, the first of reserve hikes was implemented followed by another in March ’37 (and again in May ’37). It was the second of them which stirred the background behind the yield caps precursor; T-bill and bond prices began to plummet as the banking system scrambled to liquidate saleable assets.

The resulting rising in Treasury yields ended up being only temporary because:

The error could have been avoided in light of a little more context, observable in, embarrassingly, the credit dispersion of its member banks…In other words, the entire member banking system had transitioned from 18.3% of its earning assets being held in the form of US Treasuries and bank reserves (deposit balances with the Federal Reserve) to start 1930, and with a high of $35 billion, to 36.8% of only $25 billion in those same highly liquid categories by 1933, to then 59.4% of still only $32 billion in earning assets when in early ’37 the Fed risked angering its Treasury Department masters envisioning inflationary pressures that didn’t actually exist.

The numbers only seemed to support their case if only the narrowest set of them. A wider survey would have revealed much deeper, entrenched deflationary pressures still inhibiting even a recovery seemingly developing a meaningful degree of rapidity for the first time.

While the Fed looked upon its own balance sheet as a money printing bridge potentially extended too far, looking back at the banking system’s collective balance sheet would’ve shown just how wrong they were.

In other words, sure, the economy was rebounding and prices were rising but each was doing so from a deep trough and those facts obscured otherwise very much entrenched deflationary conditions still – even in ’37 – evident and even visible (below). For as much as the Fed expanded its own balance sheet it was only to partially offset the major changes in the far larger banking system overall.

Most of all, paramount liquidity fears that had never adequately receded drove depositories as a group out of lending and toward holding only the safest and most liquid assets; including, ironically, deposits held with Federal Reserve banks (bank reserves!) 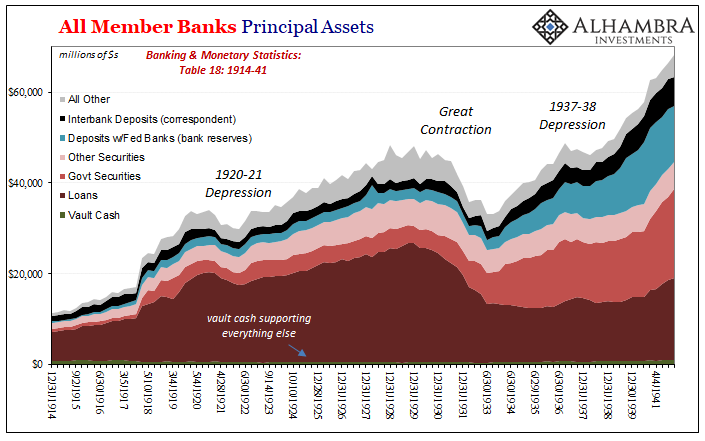 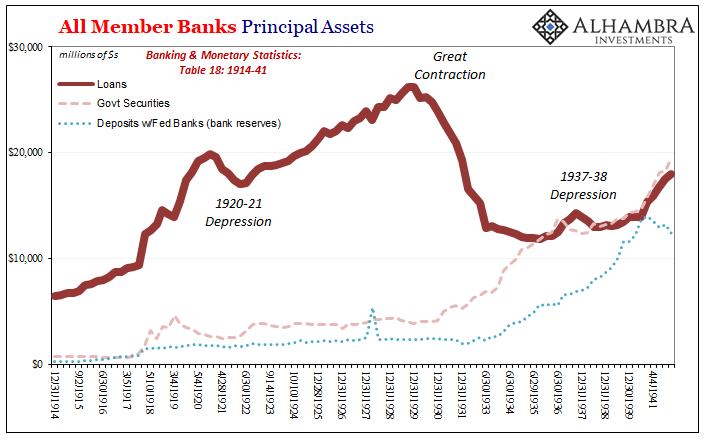 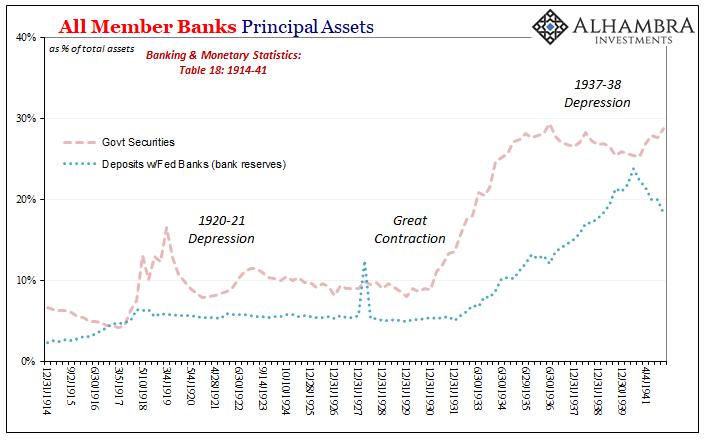 This is not a banking/monetary/economic system on the verge of breaking into inflationary excesses; on the contrary, it is one still scared stiff at the slightest hint of any further liquidity problems.

One way in which that very thing manifested specifically with the 1936-37 reserve changes was in interbank deposits (correspondent liabilities). While the Fed screwed around during the initial collapse in 1930 and 1931, the interbank system had, for a while, provided some of the funding resources that the central bank did not (during the contraction, for instance, bills bought and discounted at the branches dropped to near zero by ‘33).

For nearly two years, the interbank system kept the implosion from being worse, but it was only wasting time before the inevitable piled on:

Then monetary policy only several years later made it worse again:

When examining the prospects for these 1936-37 reserve requirement increases, as is usual bureaucratic procedure (in any time period), the Federal Reserve’s staff had commissioned several studies purportedly examining the structural and technical soundness of its proposed plans. One such concern under scrutiny had been the possibility of unequal reserve distribution; some (legitimate) concern had been expressed as to whether central reserve city banks, for example, would be uniquely insufferable of higher reserve requirements having already and repeatedly expressed their misgivings.

The Board (FOMC) decided that country banks, these small, out-of-town banks at the bottom of the correspondent system pyramid, “as a group had a large aggregate amount of excess reserves and excess balances with correspondents and could easily meet the increased reserve requirements.” You know what they say about famous last words. 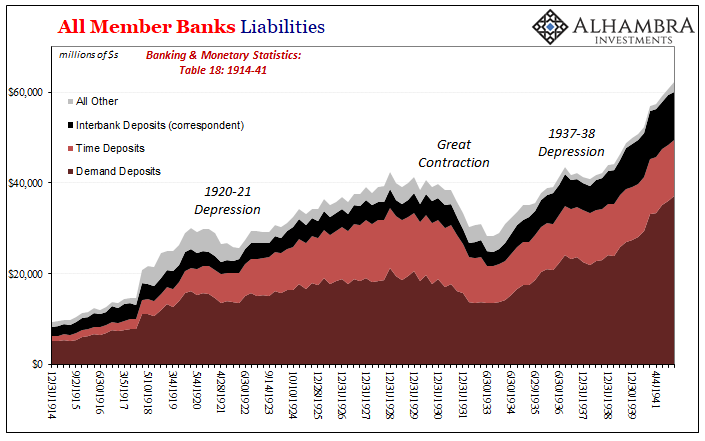 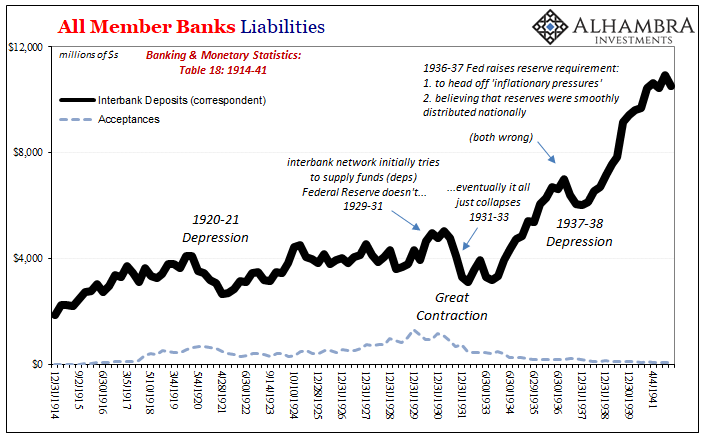 These interbank deposits had become an important source of funding for the entire system, a way to redistribute money from institutions flush to those banks still struggling to hang on in the aftermath. Along comes the Fed with its “studies” purporting to support their inflationary bias and, bam, the essential interbank business falls apart at this very same systemic seam all over again.

The resulting 1937-38 depression was, by itself, on the order of some of the worst in American history. The reason? Rot at the intellectual foundation:

The over-infatuation with bank reserves during the 1930’s was itself a consequence of bureaucrats knowing only their numbers rather than the complete extent of their jobs. As Milton Friedman and Anna Schwartz had put it in their 1963 A Monetary History:

“It was widely accepted that monetary measures had been found wanting in the twenties and the early thirties. The view that ‘money does not matter’ became even more widely held, and intellectual study and analysis of monetary institutions and arrangements probably reached an all-time low in the study of economics as a whole.”

I will state that a new all-time low has been subsequently reached over the last half century, with a new bottom surpassing the previous bottom each and every year.

While the current period has never reached the extent of the Great Depression, this deflationary background remains visible on the collective balance sheet of the banking system anyway. Like the thirties, the Fed’s balance sheet has swelled immensely; and like the thirties, bank reserves aren’t that much of the overall story no matter how much they play a central role in the mainstream imagined narrative (supported from afar by central bankers wishing to sell this view).

It’s not what you see the Fed doing which matters; and this is not a new development. Bank reserves aren’t anything more than a monetary policy byproduct of central bank expansion reacting to something else already going wrong. Whether there’s an actual monetary byproduct, that issue is only settled by the banking system and its balance sheet. 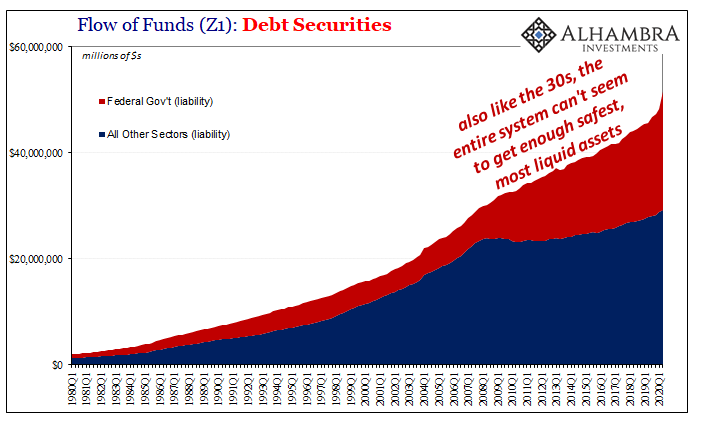 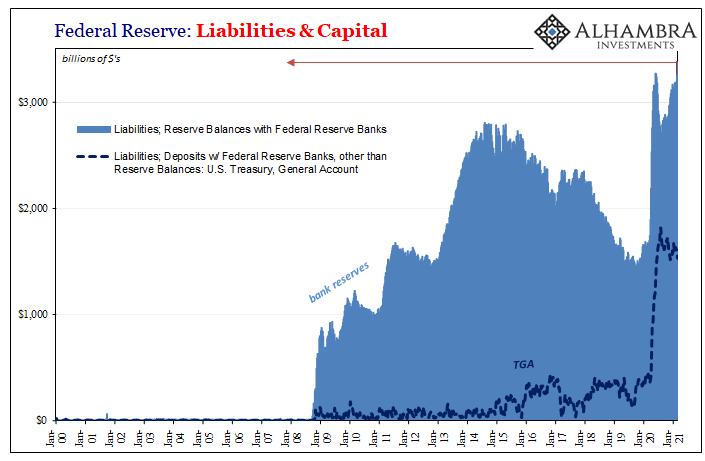