Markets continue to move based on the expectation of a post-virus boom. At least that is the dominant narrative right now. The economy, boosted by another round of stimulus, will surge once the virus is under control and things return to normal. President Biden last week offered his version of optimism by saying that families would be able to gather for a July 4th celebration, but only in small groups for backyard barbecues. I’m guessing that the President doesn’t get out on his own much, because if he did he’d know that offering that as some kind of aspiration sounds pretty silly to most of the country. I’ve got news for the Biden administration; the barbecue has already started. 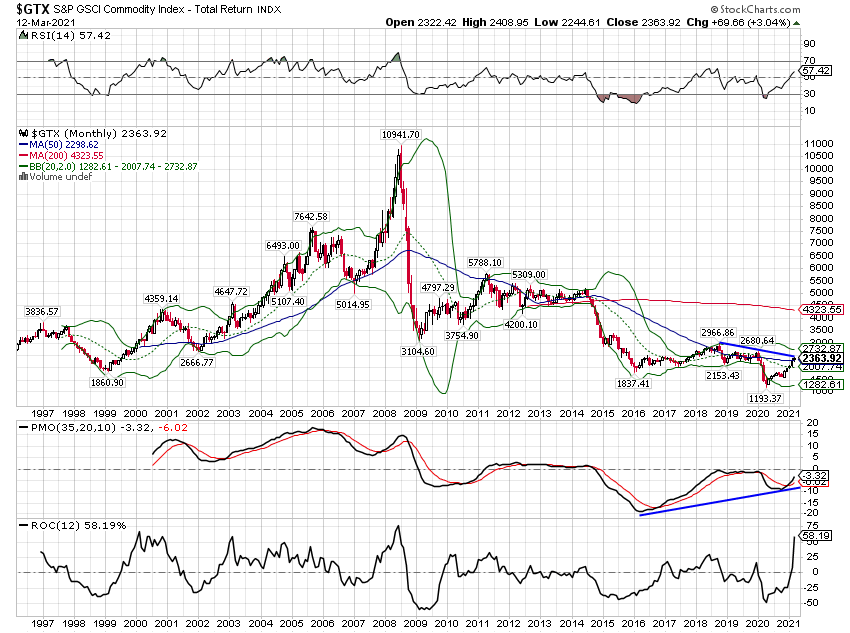 Commodity prices haven’t even gotten back to the levels that prevailed in the post-2008 crisis period. And forget about anything resembling the last weak dollar period from 2002 to 2008. If this is the beginning of a so-called “supercycle” in commodities, we have a long, long way to go. Market perception today is that commodity prices are soaring and if you look only at the 12-month rate of change, that is true. But in context this move is nothing.

We are seeing rising prices of a lot of items and shortages keep making headlines. But this was a very different recession than any in the post-war era. This recession was essentially a supply shock in slow motion. Every post-war recession as far as I know was demand-led. We’ve never shut down the economy voluntarily – well mostly – before. And the government response is exactly what one would expect for a demand shock – always fighting the last war –  which is only going to make things worse, if temporarily. Supply will eventually catch up to demand – the cure for high prices is high prices – but in the meantime, juicing everyone’s – almost everyone’s – bank account with stimmy checks isn’t going to produce any more computer chips.

Having said that, inflation expectations today are not out of line with recent history. Some perspective is called for:

As I said last week, nominal and real yields are rising, the yield curve is steepening and those are positive signs for the economy. I’d prefer to see real yields rising faster than nominal yields but what we have today is not out of the recent norms. The 10-year Treasury hit a cycle high last week as did the 10-year TIPS yield. But the current 10-year yield is not significantly different than it was nine years ago. Yes, nine. 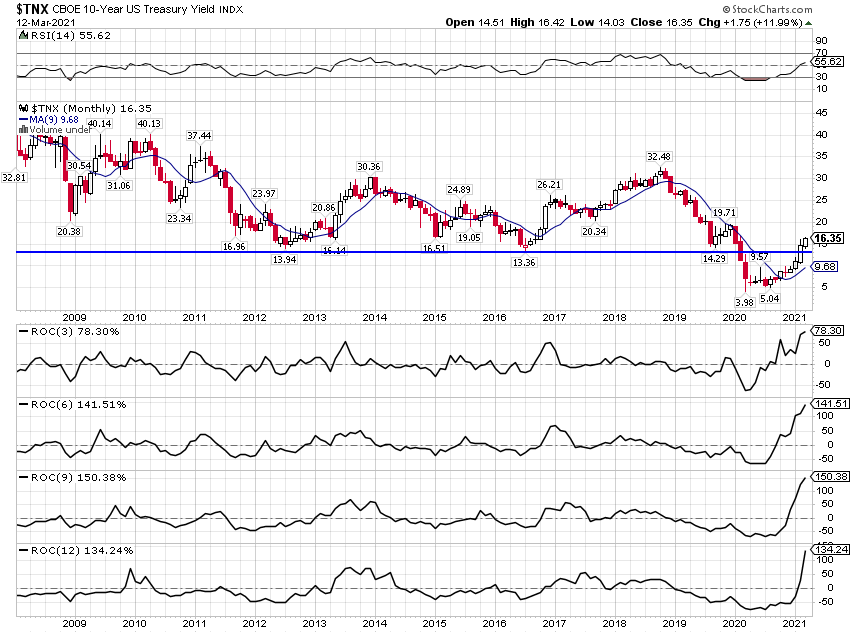 Our job as investors is to figure out what everyone else believes is the truth about the economy and markets. Well, actually we want to take that one step further and try to figure out what everyone believes everyone believes about the economy and markets. Jeff Snider writes about reality. My job is to mind the gap between reality and Mr. Market’s perception of reality. Usually, that just requires a bit of perspective. So, here’s one more bit of perspective for you. The dominant belief today is that the dollar has to fall, that these huge deficits will undermine the dollar’s position as the reserve currency. Well, I’ve been doing this a long time – nearly 30 years – and I’ve been hearing similar things my entire career. And yet the dollar index continues to trade in a range that has persisted – with some outlier deviations – since the late 80s. I don’t think anything going on today is going to change that any time soon. 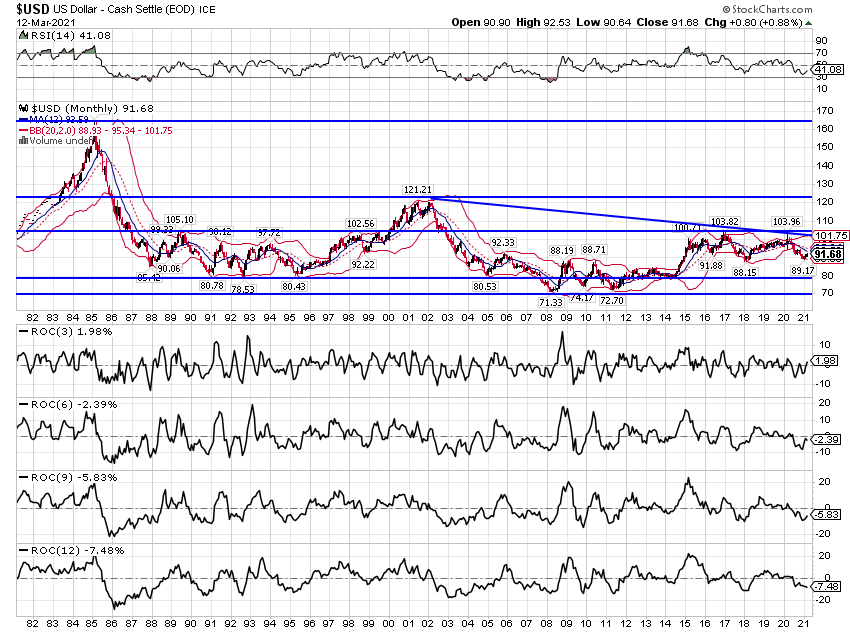 Our environment is unchanged this week:

The economic data released last week was generally pretty good showing growth and limited inflation. The CPI and PPI were both somewhat less than expected. Wholesale inventories rose some but the inventory/sales ratio fell so the shortage/inflation narrative seems likely to persist. The JOLTS report had a good headline so the rest of it was pretty much ignored but I can’t help but point out that neither quits nor hires has recovered nearly as much as opening. Indeed, hires are down over 11% year-over-year. The jobs market has a long, long way to go if we are going to get back to where we were (whether that should be the goal is an entirely different question). 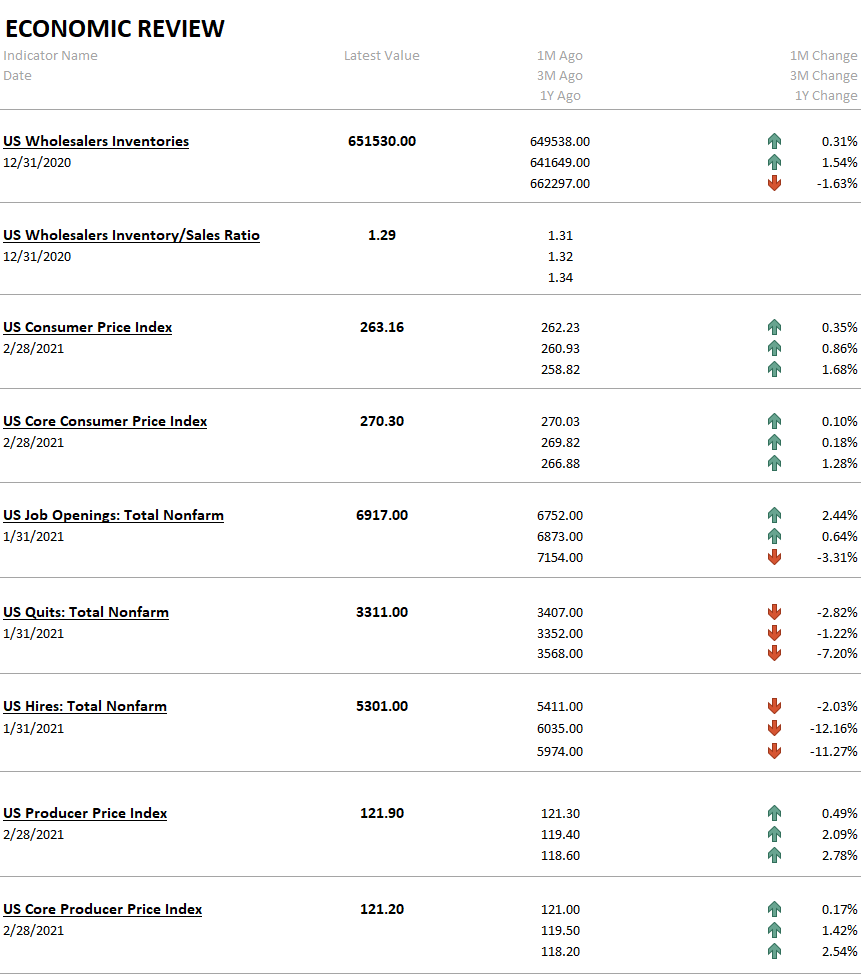 This week we get an update on the housing market with starts and permits. We’ll also see if retail sales were able to maintain some – any – of the momentum from last month’s surge. And we’ll also get an update on industrial production. 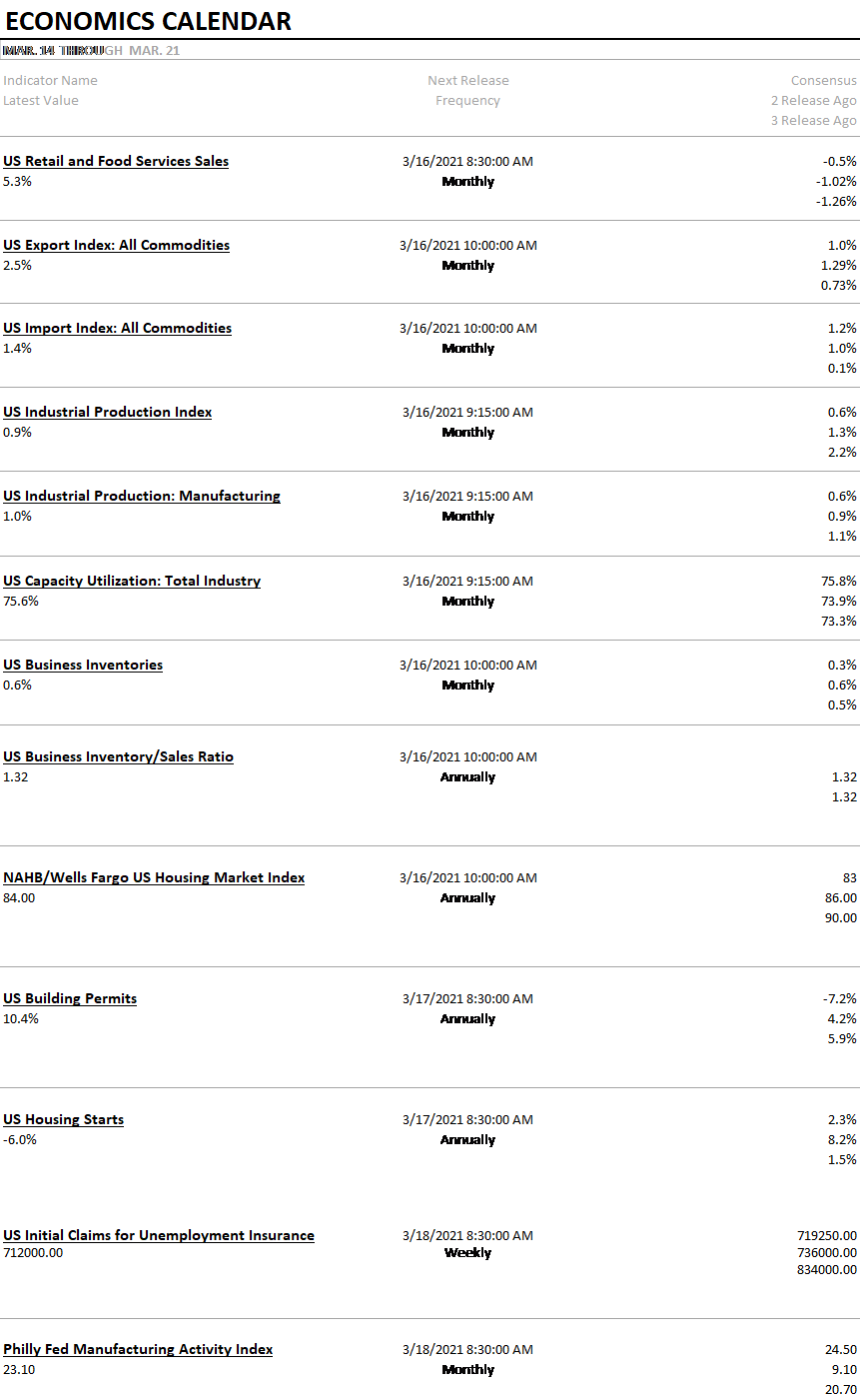 US stocks surged last week as bond yields rose. Small caps, theoretically the most economically sensitive, roared ahead by over 7%. US REITs also had a great week, up over 5%. REITs have lagged this cycle because of the uncertainly about what happens in the post-virus world. Everyone seems to think work from home is some kind of permanent condition but I suspect a lot of people are going to want to go back to the office. We’ll see.

Foreign markets generally underperformed the US although Europe was an exception. EM is starting to see outflows as the dollar has stopped falling. We have a position that we are watching very closely.

From a style perspective, value continued to lead last week with, again, small-cap surging, up over 8% on the week. We remain overweight value and small-cap. 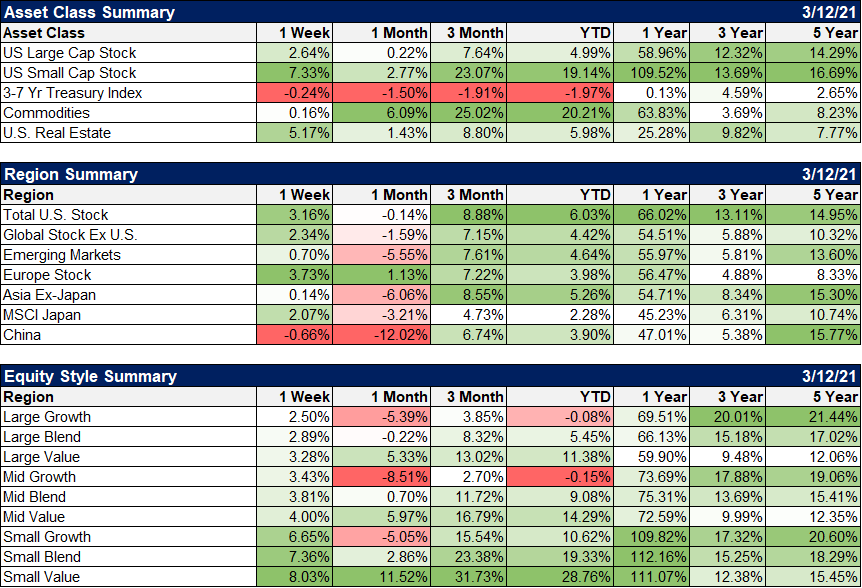 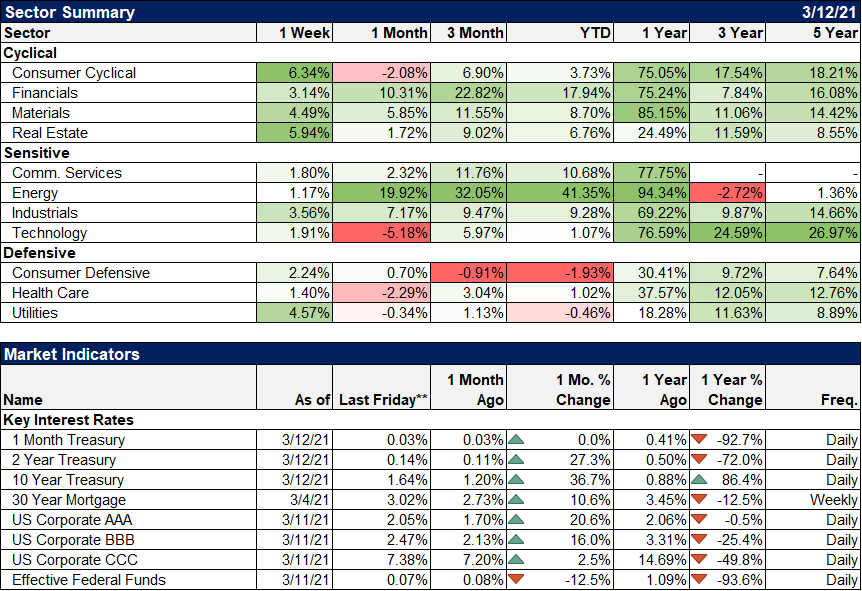 The economy continues to expand from last year’s shock and inflation expectations are indeed rising. But no matter how exuberant stocks are, the bond markets are not predicting any kind of boom. Improving yes, booming no. The trends are still toward improvement and rates of change matter, but context matters too. Rates today are pretty typical of what we’ve seen in the post-2008 crisis period. And last I checked there was no boom during that time.