The Federal Reserve has allowed itself an image of a marshmallow when it comes to the banking system it is (one-third) charged with regulating. First and foremost, along with the two other (redundant) triplets, the OCC and FDIC, the US central bank is not a central bank at all; it is near exclusively a domestic bank regulator. And while “macroprudential” policies are now the normative way for influencing them, rather than actual money the Fed can’t define, measure, nor supply, hardly anyone believes this other approach amounts to anything more substantial than nonserious chiding.

And even then the public, I think, sees high profile complaining by the big banks as highly effective; Jamie Dimon throws a fit about the SLR, the marshmallows give in.

Not this time, though. Jay Powell has thrown down the gauntlet. Seeking to reestablish some semblance of independence (from Wall Street), he’s taken a hardline on this SLR business. Just a few days ago, when the FOMC last met, during his afterthought press conference the Chairman said he’d announce something about this bank balance sheet metric/penalty in two days.

As has become typical, the press (and markets) immediately wrote down how Powell was sure to give-in yet again. Instead, two days later, all three of the trio spit in everyone’s face:

The federal bank regulatory agencies today announced that the temporary change to the supplementary leverage ratio, or SLR, for depository institutions issued on May 15, 2020, will expire as scheduled on March 31, 2021. The temporary change was made to provide flexibility for depository institutions to provide credit to households and businesses in light of the COVID-19 event. [emphasis added]

I said yesterday on Hedgeye TV with Keith Mccullough that I thought this is just what regulators would do. But why?

There’s more macroprudential to it than just regulators reaffirming dominance over the regulatees. While taking a clearly contradictory stance so very publicly (people have actually been talking about the SLR lately) represents a clear bonus, in the official mind, there’s more nuts and bolts at stake.

What I said to Keith was that the chief goal of any Fed policy revolves around lending. Hell, even the press release which first announced the SLR exemption last year made this plain:

The regulatory restrictions [SLR] that accompany this balance sheet growth may constrain the firms’ ability to continue to serve as financial intermediaries and to provide credit to households and businesses. [emphasis added]

One part of this regulatory portfolio is financial intermediaries, market makers and dealers, the other more basic piece is straight lending to households and businesses. This is not just standard boilerplate, it’s deeply embedded conventional thinking.

Without getting lost in the weeds of regulatory details and balance sheet mechanics, what the Supplementary Leverage Ratio does is – potentially – make balance sheet growth more “expensive” in general (in a number of ways we don’t need to get into here). That would, as the Fed acknowledged in the flurry of UST issuance and bank reserve creation last year, possibly “constrain firms’ ability to continue to serve” these basic financial roles by imposing these higher costs.

So, for a period of exactly one year, regulators set them aside – for only UST and bank reserves (“deposits at Federal Reserve Banks”) taken on to any bank’s balance sheet during the one-year period. The commercial banking system did, indeed, load up on USTs and got onloaded with bank reserves (as a matter of monetary policy).

With the SLR coming back to full in a matter of twelve days, balance sheet “costs” are about to rise for those specific assets.

By refusing to renew the exemption, the Fed may be hoping to accomplish sort of the same thing as a central bank might, in theory, using negative interest rates (to be clear, I’m not saying SLR is or acts like NIRP in the marketplace, or could lead to the same impacts in it, only that in this particular situation for the banking system the results would be theoretically similar and so they might share the same intent in a very narrow sense). 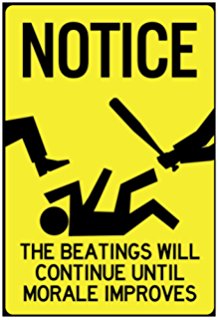 A negative interest rate on bank reserves means intentionally punishing commercial banks in possession of low-paying but safe and liquid assets by penalizing them for nothing more than holding them; if you don’t like these costs, Mr. Dimon, then go out into the market place and undertake risky activities undoubtedly yielding higher returns to make up the increased opportunity costs being imposed by NIRP.

If authorities make the liquid part of a bank’s balance sheet cost more, then (portfolio effects) it stands to reason they could influence that bank’s behavior. And where better to find more profitable opportunities than lending? The very thing the central bank wishes for the economy in the first place.

What is the SLR coming back for UST’s and bank reserves alike like? In this specific case, higher costs being deliberately imposed on the safest, most liquid parts of US banks’ balance sheets given what they’ve done over the past year. Understanding this, might Jay Powell be saying the same thing as he would imposing NIRP: you don’t like higher (balance sheet) costs on low-paying highly liquid and safe instruments, too bad, go out and find better returns by raising your loan book!

The caveat here is, obviously, selling in UST’s that the past few weeks has been provoked by the SLR cliff; so long as the Treasury market remains contained to nothing more than that plus mostly reflationary selling (and, contrary to popular belief, it has) Jay has stated very clearly how he’d welcome these theoretical portfolio effects with open arms – even at the market cost of lower Treasury note and bond prices therefore slightly higher longer-term yields.

In theory, these portfolio effects are wonderful and magnificent in how straightforward they model. In practice, blah. Japan, Europe, many years.

The reason NIRP has only failed is that banks don’t chase nominal returns – ever. Balance sheet decisions are made on a risk-adjusted basis, both assets as well as liabilities. In fact, risky liabilities can and have influenced asset decision-making; especially since, oh, around August 2007.

If Jay really is trying to use the SLR cliff as a macroprudential cattle prod, of sorts, and I do believe he is, the Chairman at least begins with a good reason. Lending since the first GFC has been a huge disinflationary (and outright deflationary in the sense of Mom and Pop or Joe Sixpack, neither of whom can get easy, efficient credit even though every risky bond floatation is ten times subscribed) drag, and one that has actually been amplified (no surprise) in the wake of Powell’s awful performance during GFC2 (so awful, he had to lie about it on 60 Minutes last year and then again in today’s WSJ op-ed).

See what I mean (Z1 helpfully released by the Fed about a week ago updating estimates through the end of last year): 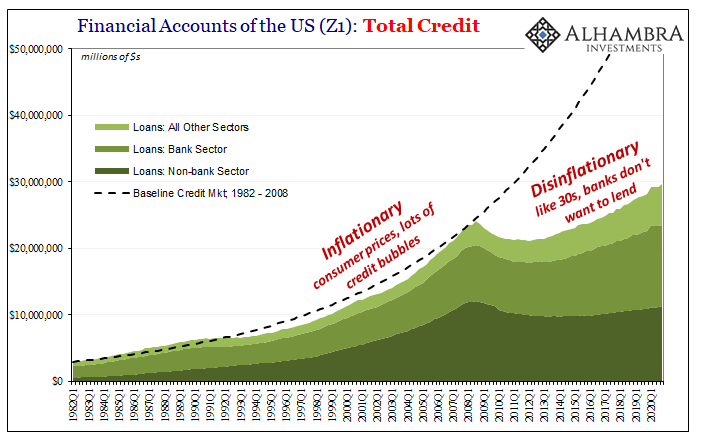 Focusing on the individual sectors, you can plainly observe the weak spot in all the “stimulus” frenzy of 2020 and now 2021. The bank sector isn’t lending; aside from the liquidity panic-driven surge in Commercial & Industrial loans in March and April 2020, as companies worldwide reflexively drew down every dollar of revolving credit lines they could (because Jay really had performed that badly), lending has declined. QE’s and bank reserves, Mom and Pop aren’t getting any credit (in every sense of the term).

But even outside the banking system, in the near-equal sized segment of non-banks, the growth in lending in it is illusory. The two 800 lb gorillas of non-bank debt are Fannie and Freddie; GSE mortgages, primarily. Account for those, among the rest of the private financial system, it’s been no dice for Mom and Pop here, either. 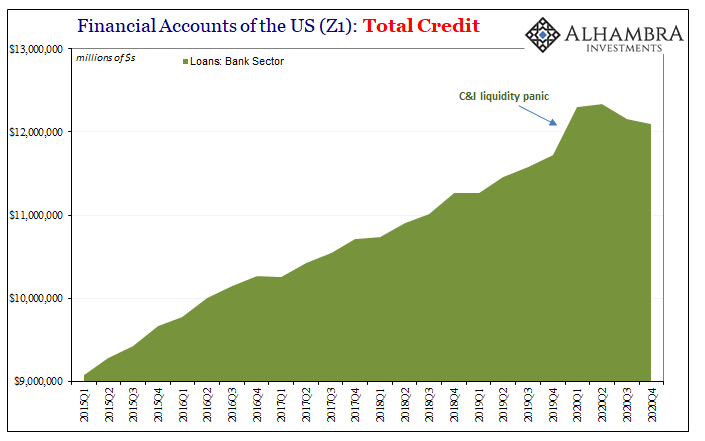 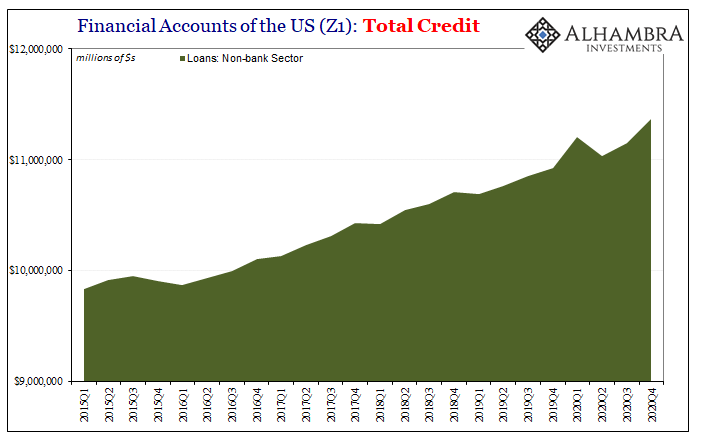 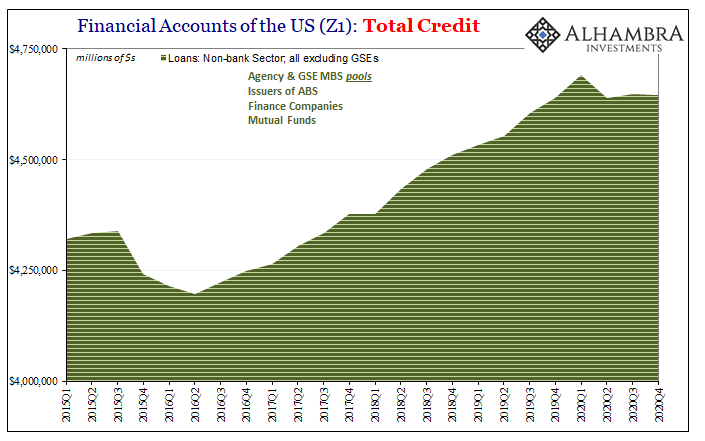 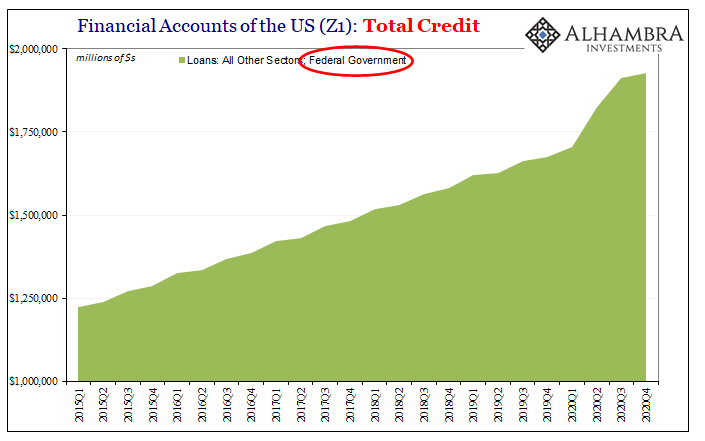 Apart from Fannie and Freddie, who has been lending? Exactly who’d you expect: Uncle Sam.

In other words, take away the federal government in all its non-economic pockets and private lending’s going in reverse. Jay Powell knows this.

Therefore, it would make sense why the Federal Reserve “all of a sudden” wants to play bad cop with the banking system. To make a public show while, more importantly, attempting to manipulate behavior (portfolio effects) into the outcomes its models show are most beneficial to its self-assigned goals of inflation and unemployment: more credit, more jobs, then (sustained!) inflation confirming the whole effort.

So long as the Treasury market remains only reflationary, Jay, I believe, is happy to keep up the “cliff.” 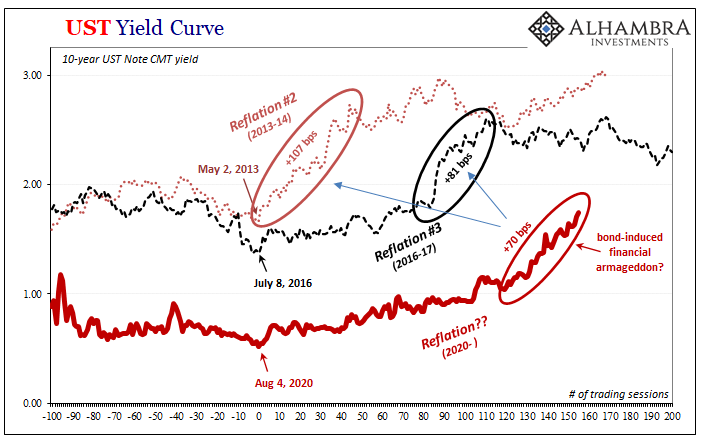 The most important question: will it work? Of course not. Central bankers are very good at manipulating public opinion and the undying affection of certain markets (cough, shares, cough), but they’ve shown no ability whatsoever to surmount the technical and monetary challenge of risk-adjusted returns in banking (and non-banks, too).

That is because, at root, the Fed is not a central bank but rather a domestic bank regulator. As one, this SLR episode represents a very good example of how in reality it attempts to work.