Throw A German ‘Log’ On The Possible Fedwire Fire

Throw A German ‘Log’ On The Possible Fedwire Fire

One other fascinating, corroborating angle to the short run picture comes at us from Europe, specifically Germany. As illustrated yesterday, there’s a whole bunch of market prices/indications from around the world which have keyed in on February 24-25 as a possible turning point. The most obvious candidate which may have triggered it would be February 25th’s major US Treasury selloff. 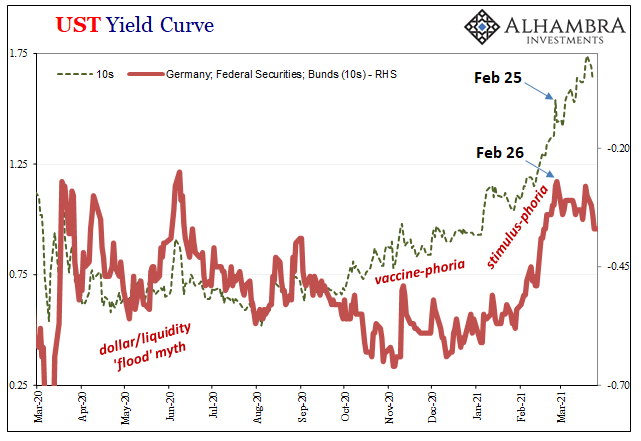 But if that was the case, why would there have been a split from Germany’s bunds (schatzes, too)? These two crucial collateral heavyweights trade in tandem quite often, more often than not, and when they don’t it gets your attention beyond the idiosyncrasies plying each – such as the idea of COVID impacting Europe far more than the US, especially given the utter vaccine debacle developing over there.

These two were easily synced up from early November through February 26, at least moving in the same direction. German federal yields like their Treasury counterparts were instilled with some relatively modest reflationary optimism, far less in Germany, rising from around -64 bps to upwards of -27 bps and the highest since last June (so not nearly the US level of BOND ROUT!!!!) 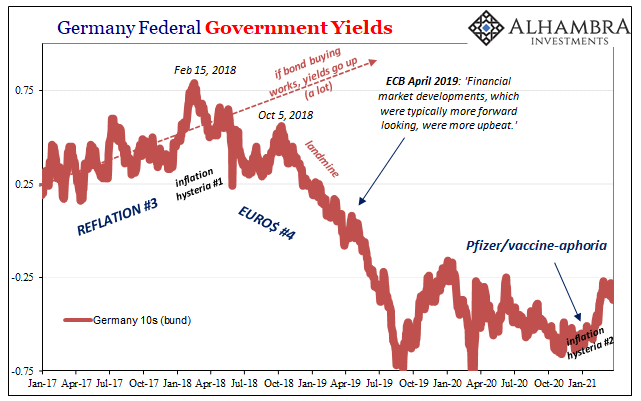 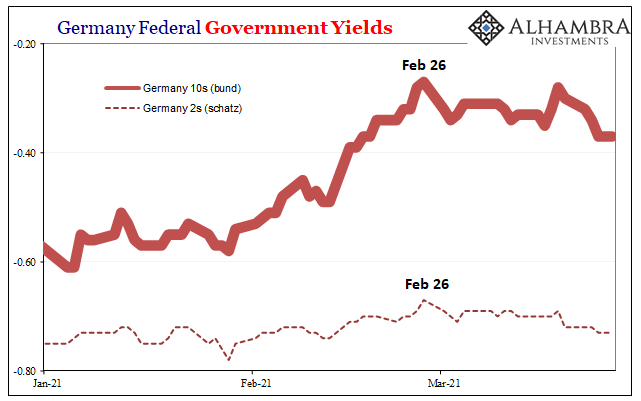 Then, again, in late February the change which has prevailed for now an entire month. While four weeks is still within the realm of the short-term, it’s yet another, and a key set of numbers, coming down on the anti-reflationary side of the ledger. While not yet more than a potential market fluctuation, something clearly changed, though what, exactly, did isn’t clear nor what it may mean outside the immediate future.

We can try to make reasonable guesses, though. Not just in how the German curve shifted, but the perhaps more obvious timing factoring other factors contributing to the inflection: Feb 26 top in bunds/shatzes; Feb 25 big selloff in USTs; Feb 24 Fedwire. If this is merely COVID differentials, so to speak, why New Zealand, too? And, of course, CNY like copper and the like. 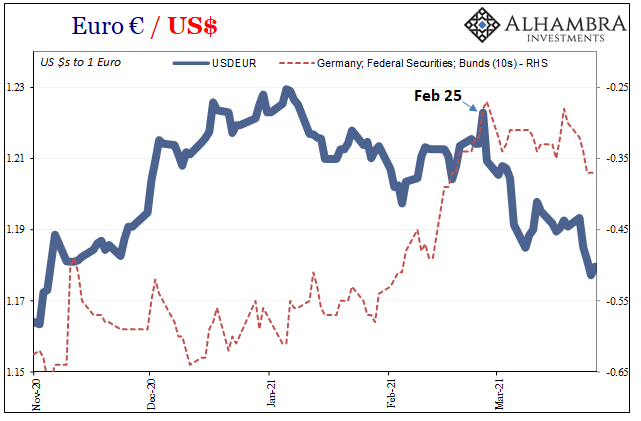 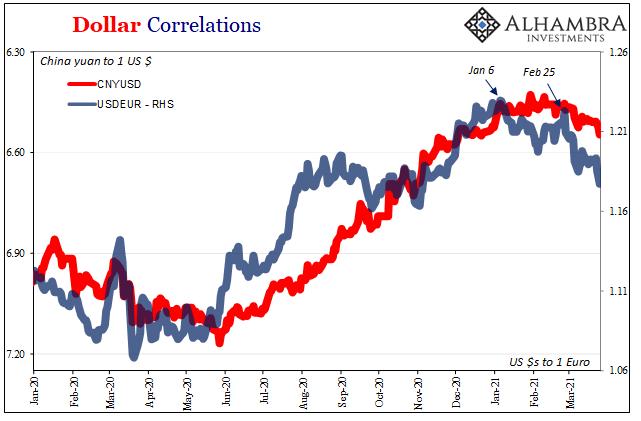 What might be most interesting is how the euro like China’s yuan had already been moving in the non-reflationary direction long before this crucial global action February 24-26. Some might speculate this was nothing more than rising US rates drawing “capital” away from these markets, but then why wouldn’t rates in Germany still adjust in the same direction?

UST’s still reflation-ish, German bunds no longer on the surface; making the latter suddenly less rather than more attractive given that there has been renewed buying in them while selling in Treasuries. Something else going on here, obviously tied up to the euro and its playing around the general trends in CNY.

Furthermore, the textbook case for interest rate differentials has never held up; and once again it’s all very 2018-ish:

Since Economics textbooks are rarely, if ever, rewritten, when all these things repeated in 2018, the “capital flow” excuse revisited the mainstream conversation at the time trying to figure out all sorts of liquidity and market gyrations wholly inconsistent with the inflationary recovery scenario being offered as guaranteed fact in all these same media outlets.

And that’s not all which may have changed in February, one more surprise in store; the PBOC for last month finally reported an increase in foreign assets on its balance sheet! For the first time since August 2019, it wasn’t much, a relatively tiny uptick pushed Chinese holdings to the highest since August 2018 (that’s how artificially flat this balance sheet item has remained) and might have seemingly corroborated US$ (and €) inflows. 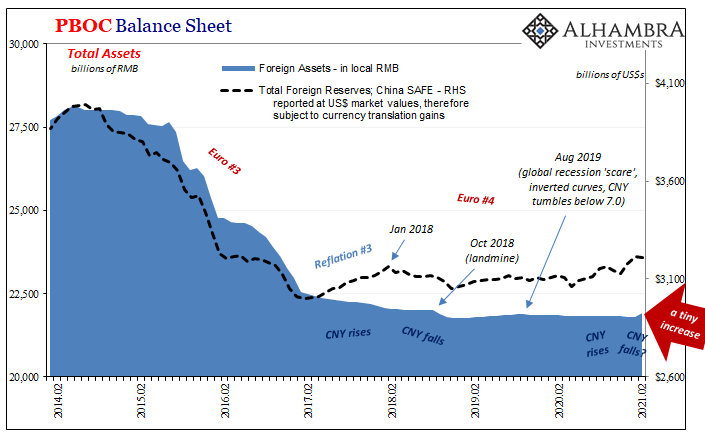 Picking through those numbers and how backward these would have to be – in the textbook as well as surface eurodollar story – will have to wait until next week (assuming they were anything other than a rounding error).

For right now, we’ll just have to leave Germany’s bond market in the same place as those many others in this post-Fedwire wrong way trend pointing to something more than – in the immediate-term – pure corona-risk. And this one, bunds plus schatzes, might be the biggest, most substantial of them all.