This translated into the “headline” of +916,000, of which +780,000 in the private sector (the balance due to government re-hiring). Unquestionably a good month, however leaving unanswered the same question plaguing the economy since the recession began over a year ago: is it anything more substantial than reopening?

In March, there were two possible reopening categories at least when compared to February; the ever-present COVID restrictions plus literal rewarming, as in the Southern United States (primarily Texas) thawed completely from the February’s wintry messes.

Leisure and hospitality work led the gains last month, accounting for 280,000 of the overall. Construction picked up 110,000 while 76,000 came from local government school districts coming back toward normal. 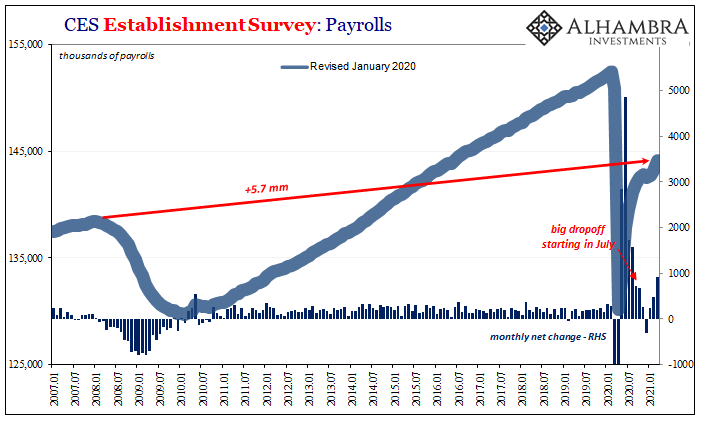 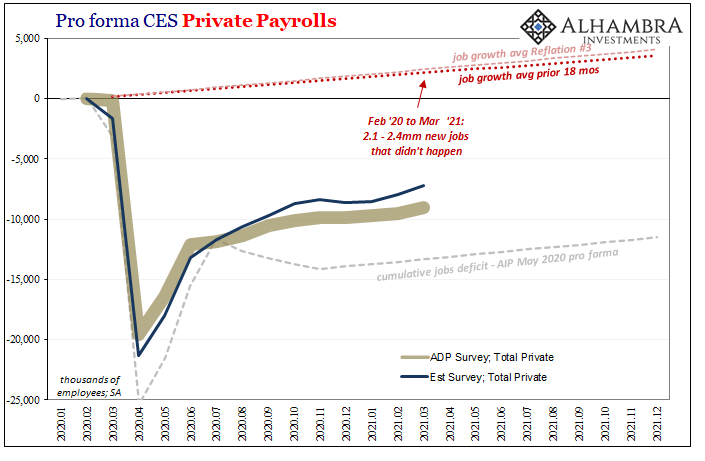 While the BLS pointed out “widespread” employment gains in its press release, there’s a clear difference in accounting. That discrepancy remains in the same category – the labor force itself. Even though this “flood” of work coming back into the system, like last May and June last year the labor force itself rebounded far less; picking up only 347,000 in March remaining essentially flat to lower dating back to last summer.

Like the aftermath of the Great “Recession”, we’re left to piece together just how much labor has truly been idled given this repeated asymmetry (real recoveries are symmetrical; labor use falls off sharply in recession and then recovers – in full – almost as quickly; that didn’t happen following 2008-09). 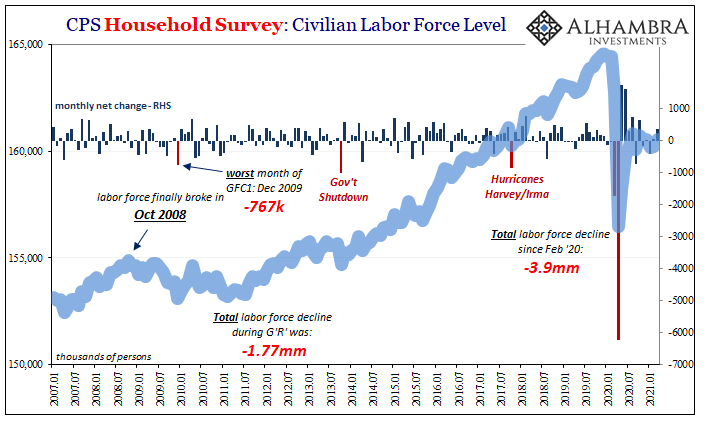 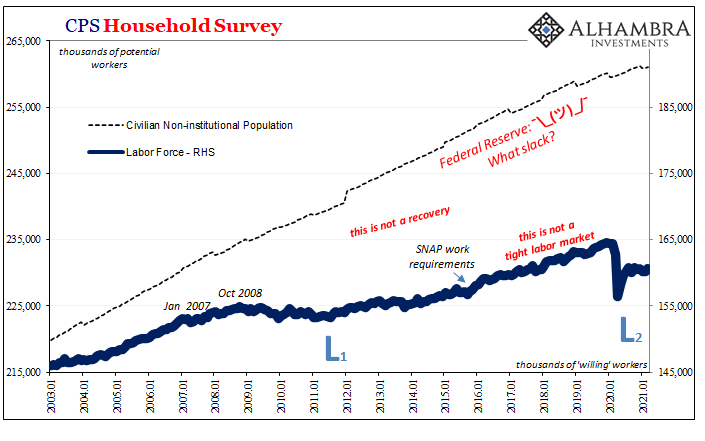 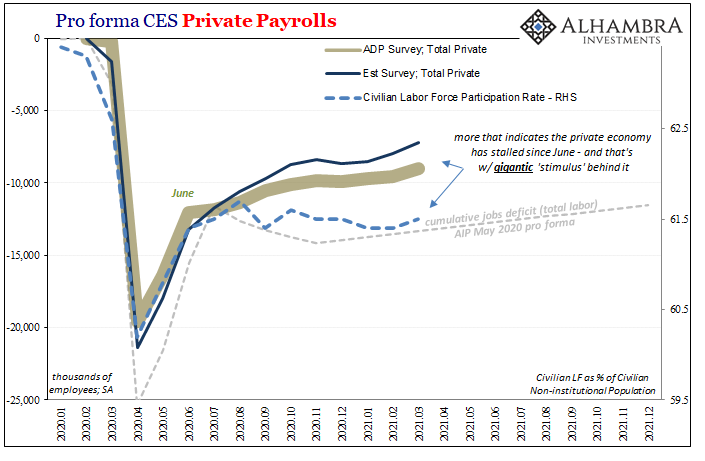 According to the BLS estimates pulled from the Current Population Survey (CPS), there were 9.7 million “officially” unemployed. Compared to the “official” version of the Labor Force, 160.6 million, the unemployment rate dropped to 6.04%.

The BLS also tells us that 5.8 million workers reporting to be employed (HH Survey) are only part-time for “economic” reasons (under-utilized). In addition, there were 1.8 million who have been excluded from the labor force (as well as the number of unemployed; both numerator and denominator of the unemployment rate) because they are “marginally attached” (they are available for work now and want a job, have looked for one in the past year but not the past four weeks).

Adding those two categories back into the calculations leads to the BLS’s U-6 number which stands at 10.7% for March. 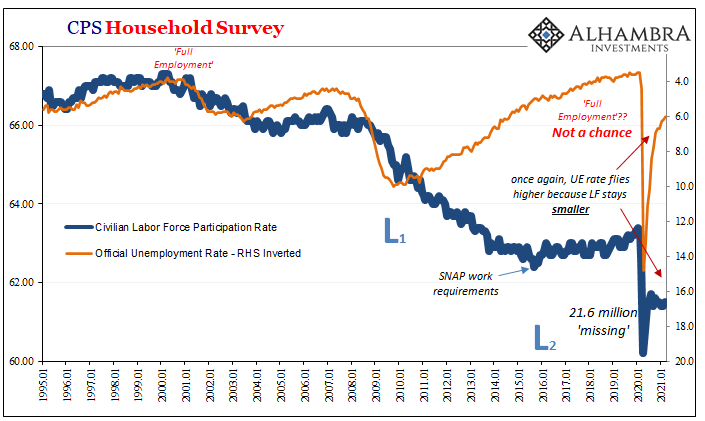 The latter of those two under-utilization measures belongs to a wider category of workers who aren’t in the labor force but say they want a job (these responders just haven’t looked for one in over a year). It makes sense in a certain sense to exclude them from the labor force as well as the number of unemployed, therefore both the top and bottom of the unemployment rate.

But this number had grown substantially starting with the current recession – from as low as 4.8 million in October 2019 to just over 5.0 million in February 2020 (pre-COVID labor problems?) and then jumping to 9.9 million by April last year (the peak). An increase of almost 5 million of people who stopped looking for work “over the past year?” Obviously not; instead, another gross multitude of hidden under-utilization.

For March 2021, that number was still 6.9 million – and remains near the maximum level set during the last “recovery.” In other words, here more than in any other line inside the CPS there has been a distinct lack of improvement which, along with the estimate for the total labor force itself, more than hints at longer run discouragement if not in the official sense (as well as estimates). 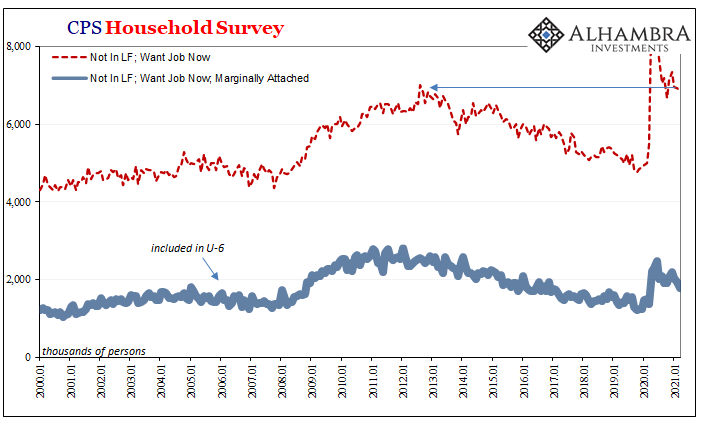 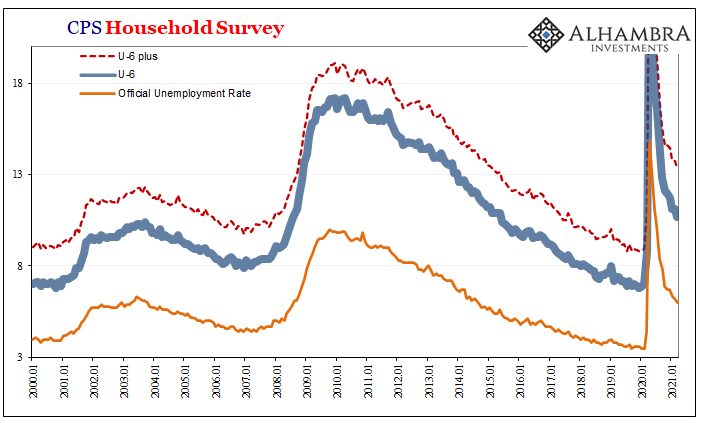 Expanding upon the U-6 by incorporating not just “discouraged workers” but the total Not In the Labor Force; Want A Job Now category to which they belong, the rate works out to 13.4% and not nearly as much changed since the middle of last year.

That might further propose how, like the first few months of huge gains in 2020’s reopening, there’s much more of the non-economic rebound contained in the current month “blowout” labor report. Beyond the simple act of opening up, time plus lack of comprehensive improvement especially since last summer leaves the same deflationary impression underlying.

And it also leaves the same big problem not yet determined: once the reopening jobs come back, what does the economy look like then? After we get over the full hump of COVID and the politics of it, how much has really been lost?

It had been up to these alternative labor market views following the Great “Recession” to lead us to the correct interpretation, the one clearly against inflationary full employment beginning around 2015; while, at the same time, the official narrative relied on the official unemployment rate only to be misled (and to mislead the public) time and again before, eventually, admitting later in 2019 that the unemployment rate must’ve been wrong the whole time.

All this payroll report confirms is what we already knew – the economy is being reopened. Quite naturally it will lead to millions of Americans heading back to work. You deprive tens of millions of the opportunity to leave their house and attend to their jobs, once allowed they’re going to flood back in.

The flood has been comparatively less in 2021 (hundreds of thousands) than 2020 (millions). And it had been jobless claims along last year with the more comprehensive CPS figures (like the appreciably smaller size of the labor force) which foretold of the looming shutdown of the rebound (the summer slowdown). The non-economic factors had turned robustly positive, but the more important economic conditions truly had not. 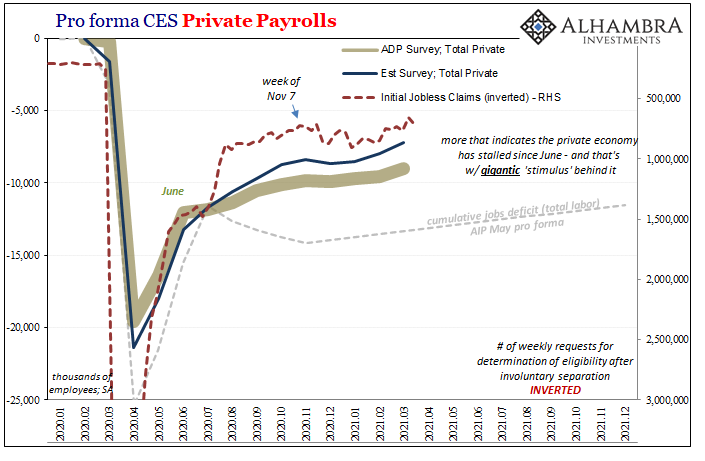 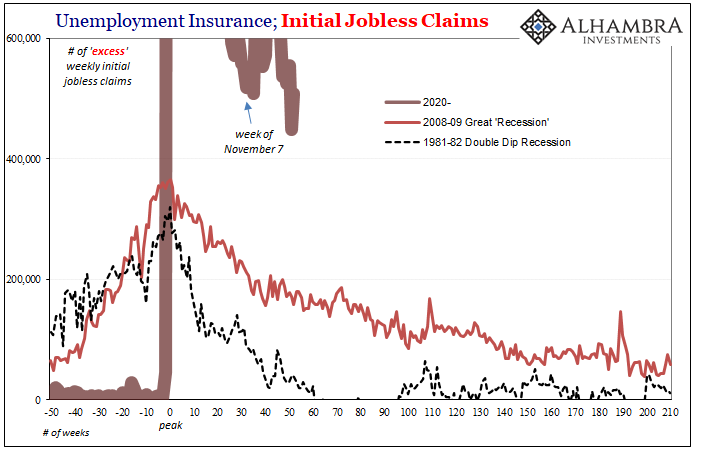 Jobless claims managed to drop below 700,000 for the first time three weeks ago, but then climbed back above that mark in the latest figures published last week (52 out of 53 weeks at record highs).

As always, the only thing that matters is if everyone gets to go back to work. These payroll figures simply confirm the non-economic reopening, and the start of some, a small fraction, getting back to work. But we already knew that.

Thirteen months after, still at least 10 million jobs short of the previous high and now, like after 2008-09, we have to try to figure out from other sources just what – and how much – that means for economic potential.

The March payroll estimates weren’t entirely reopening, the gains were indeed “widespread.” Underneath, however, the estimates continue to show that, like 2020, this wasn’t nearly widespread enough. Not everyone is going back to work, and, more importantly, millions upon millions believe this strongly to outright tell the BLS they don’t expect to.