Maybe The Biggest Challenge Is Not To Get Carried Away

Maybe The Biggest Challenge Is Not To Get Carried Away

Like a child fixated on a shiny new toy, I was enthralled by trading in WTI futures on Monday. There are times when end-of-day closing prices just don’t capture the full extent of what actually goes on during the several hours of any regular session, and yesterday was certainly one of those times.

We’ve been on top of front-end contango for some weeks now. At first wondering if merely an artifact of growing technical illiquidity as the lead contract lurches toward its expiration, then the upside-down spread was passed over to the next one in line. And it hasn’t been all that much, just a few pennies here or there. On the surface, surely not something to be riled up about.

Still, it’s not supposed to be there. A rip-roaring reopened economy stuffed to the brim with Uncle Sam’s cash freely floated along massive helicopter drops by all accounts would be one where demand exceeds supply (for oil as well as many other things) forever after. In oil futures, beautifully steep backwardation from beginning to end, near-term to far. 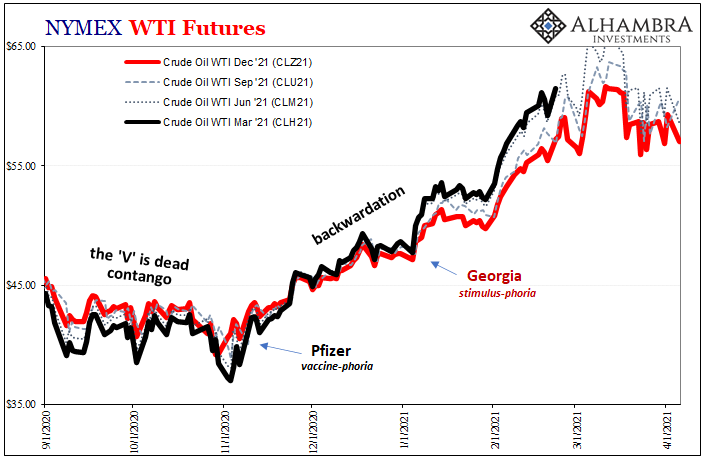 That had been the promise in WTI’s skyward ascent from early January forward; that however bad last year had been the combined thirteen-digit “rescues” would end up, in fact, rescuing the economy (globally) before anything truly bad and permanent set in. Normalcy, if not better, seemed palpably plausible – if for a time.

Around late February, the 24th, to be precise, complications arose. It’s arguable exactly what those were and how they might still be contributing or where.

For the crude oil market, specifically, it’s been the clear combination of front-end contango and flattening elsewhere both visibly corrupting the lovely backwardation. Yesterday, the 1-month calendar spread where the contango is right now, while the market as a whole sold off the very tip of the curve would see as much as a nickel, even $0.06 in contango during it. 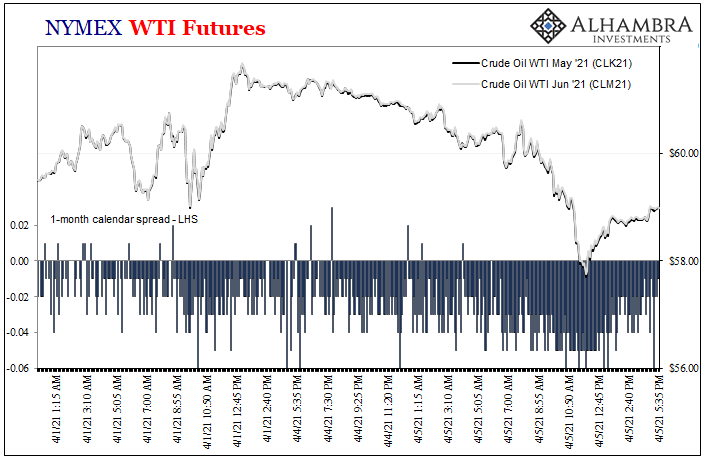 What that suggests is serious imbalance over the immediate future; to pay out $0.05 per contract for some speculator or producer to put away some additional supply for at least a month. As oil sold off, the contango expanded and the rest of the curve flattened both indicating that such uncertainty is being extended beyond the current front two delivery months.

Serious concerns that have lingered for weeks.

Even as the entire WTI curve is upward from the bottom of the previous selloff (March 23), the backwardation embedded within its contract prices continues to flatten off. As of yesterday’s close, the spread between the front month (May 2021) and December 2021 was down to just $1.58 compared to $4.38 less than a month ago. 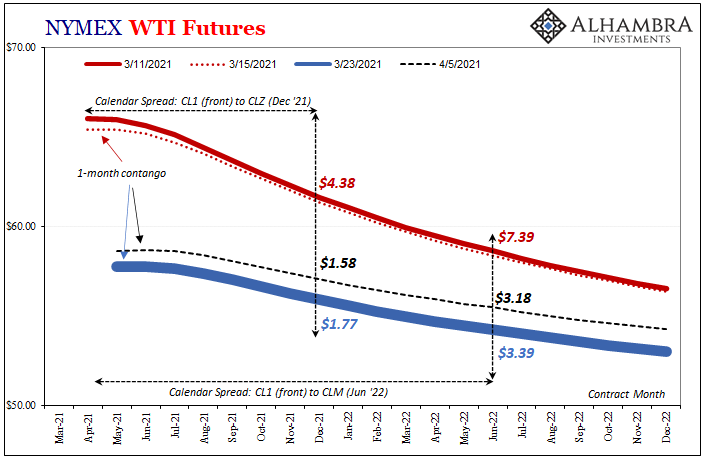 This is one of those things that sticks out given where we are “supposed” to be right now as well as for the rest of this year and beyond. Everything is in lined up in just the right way, from vaccinations to case counts to “stimulus” even a massive blowout payroll number and record high PMI’s.

Not only that, we’re told (incessantly) that the bond market even agrees with this exploding economy view. At first coinciding with the WTI curve’s positive reshape into backwardation, the reflationary sell off in US Treasuries survived (somewhat) beyond oil’s current pause.

By the end of last month, finishing up Q1, it was made to seem as if deflationists were left extinct in the world of high finance; global bonds wrecked in historic fashion as told by all the world’s financial newspapers (thanks to M. Simmons for the screencap below).

Like oil’s newfound flirtation with contango and flattening, however, there’s caution beyond and beneath the headlines. In fact, we’ve been here before, just a few years ago.

It should feel familiar because it is entirely too familiar. In early 2018, the Tax Cut and Jobs Act (TCJA) of December 2017 had promised essentially the same exact payoff right down to the devalued pennies. Exploding deficits and fiscal “stimulus” would, they all said, put the US therefore the global economy over-the-top ensuring it would reach its inflationary departure point.

There was already globally synchronized growth, and then Uncle Sam delivering the knockout blow to a decade’s worth of disinflation (here; deflation in lots of other places). The bond market stood no chance, an epic BOND ROUT!!!!! thereby unleashed. Like now, it had been described in just that way, too. 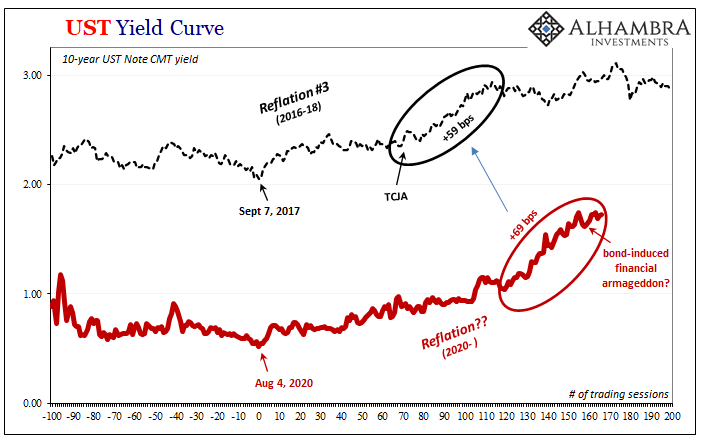 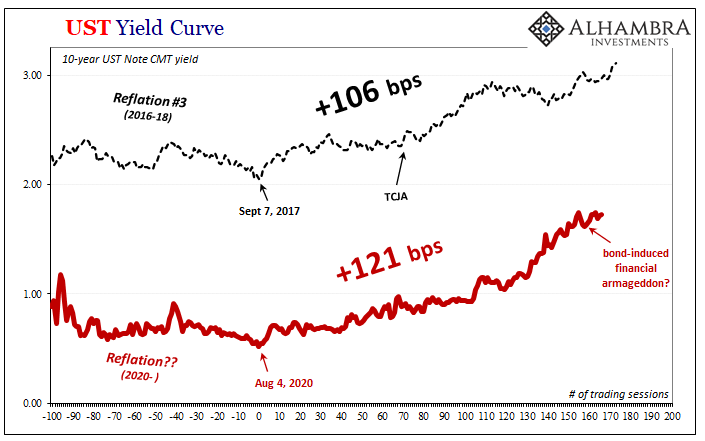 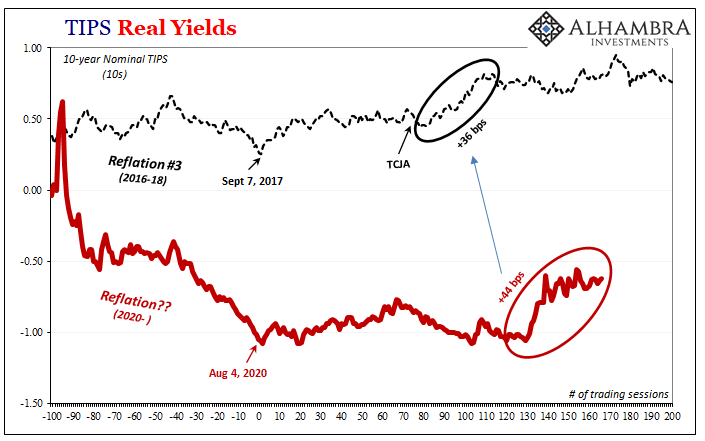 The UST benchmark 10-year proceeded to add around 60 bps in yield in the short run aftermath of TCJA euphoria. Let me repeat: the current “historic” selloff (changes) is barely a touch more than the immediate period beyond the ultimately ineffective TCJA. And in terms of nominal rates, not even close.

What’s going on in Treasuries (and the comparison’s worse in bunds or JGB’s) is not in any way unusual at all.

If anything, to this point in early April 2021, what’s truly remarkable is just how – like crude’s contango – uninspired the market seems to be about what comes next. While this kind of thing is normal for reflationary periods, as my podcast co-host Emil Kalinowski loves to point out, this current one is – by far – the weakest/worst one yet.

If this latest BOND ROUT!!!!! can’t even keep up to just one part of the second half of Reflation #3, the TCJA-inspired half, the idea that this is some historically significant sea change in outlook can only be intentional obtuseness. Gaslighting, as the kids say. 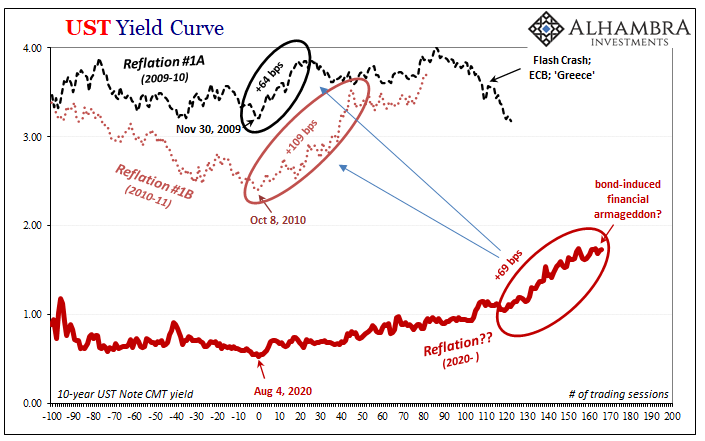 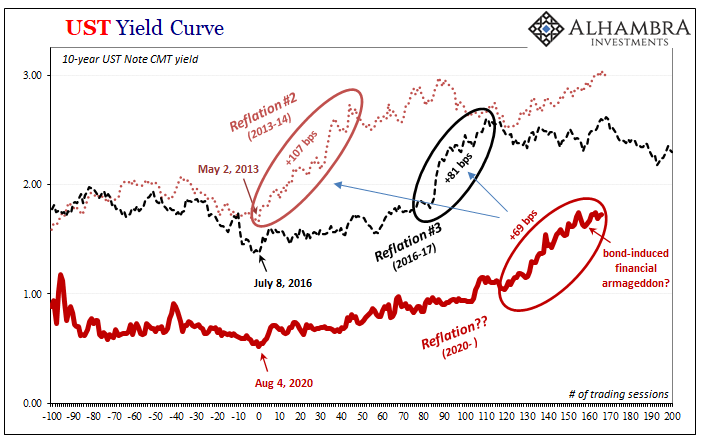 But here’s the thing, the real thing: the current reflationary trend in bonds as well as oil should be the greatest thing ever. Add up all of what’s allegedly behind it, from the latest $2 trillion fiscal “stimulus” and the next $2 trillion infrastructure “stimulus” plus the last $1 trillion like the prior $2 trillion before it, and then a couple trillion in QE’s, even an SLR cliff, how is this not some categorical change in every market around?

Again, that it can’t even measure up appreciably better to just the TCJA is a damning indictment.

The bond market really should be blowing up if what the newspapers are claiming is true. It’s not even blowing up in a way that outshines past failed reflationary periods; it can’t even equal them and that’s with, what, $5 to $7 trillion in Uncle Sam’s belligerence on top of a few more trillion in Jay’s puppet shows. And it’s not just bond yields and bond markets, nor a bit of front end WTI contango, where serious doubts remain, and remain heavily bid.

The question has only changed slightly over the years: what does the world really look like once all that front-loaded fiscal fussiness goes by? After the moderate reflationary improvement, then what?

That’s the real story here, the market’s key message is still the same one it has been since this whole thing began almost fourteen years ago. That message is simply this: reflations come and go, minor fluctuations in financial and economic conditions are by nature inevitable, but don’t get carried away when they come around.

The chances of the economy souring continues to be judged much, much higher in the long run than for it soaring. Curves in 2017-18 said so, and they still say so (just look at real yields, for crying out loud!)

The federal government can buy its way into newspaper reports and econometric models, but it can’t buy market credibility because it doesn’t work like that. Short run effects aside, these markets are – still! – telling you not to get carried away. Again. 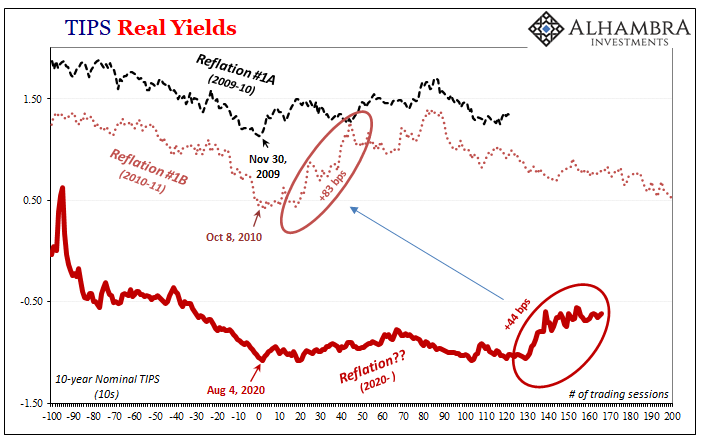 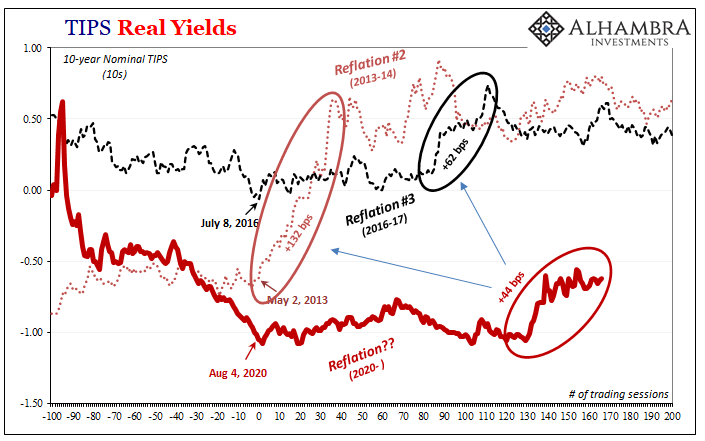 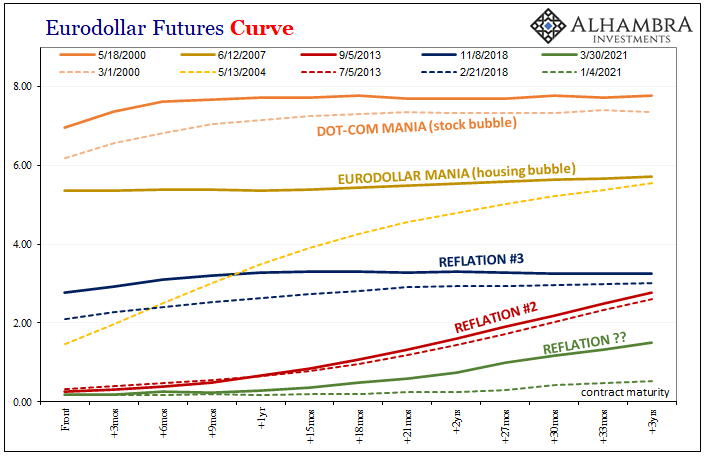