Rechecking On Bill And His Newfound Followers

Rechecking On Bill And His Newfound Followers

The benchmark 10-year US Treasury has obtained some bids. Not long ago the certain harbinger of bond rout doom, the long end maybe has joined the rest of the world in its global pause if somewhat later than it had begun elsewhere (including, importantly, its own TIPS real yield backyard). Even nearer-in inflation expectations have rounded off at their current top. Perhaps no more than a short-term rest before each rising again, then again with the rest of the world’s markets acting similarly it’s fair to ask which end is actually leading? 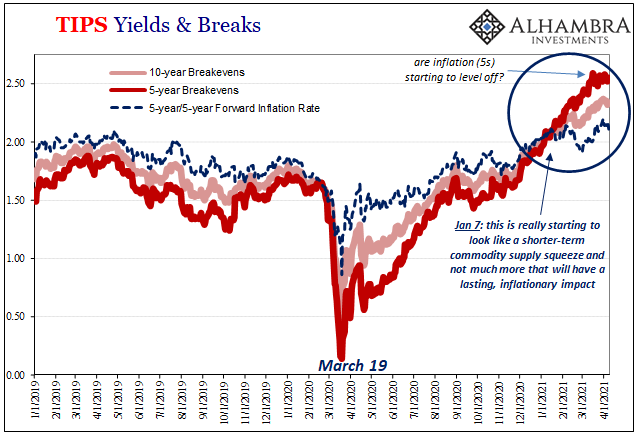 More importantly, if it’s the wrong end, why would that end be leading? Especially right now. As I wrote a few days ago, there doesn’t appear to be a single thing going wrong. Quite to the contrary, what’s good (in the textbook sense) is good to levels never seen before:

That’s the thing; as noted earlier today, everything seems to be lined up just perfectly. Vaccinations are rolling out, more states (even California) loosen themselves up, and the government continues to throw cash around to anyone who can breathe (and quite a few, apparently, who aren’t taking breaths). Trillions upon trillions before then Jay Powell and the Fed’s similar-sized puppet shows.

With that last item in mind, it’s clear in the Fed’s data that Uncle Sam’s checks have hit their mark – transferred out of TGA into the hands of beleaguered American taxpayers and thus being transformed into commercial bank deposits. In addition, Treasury refunding which has further drawn down government cash, moving that over into bank reserves. 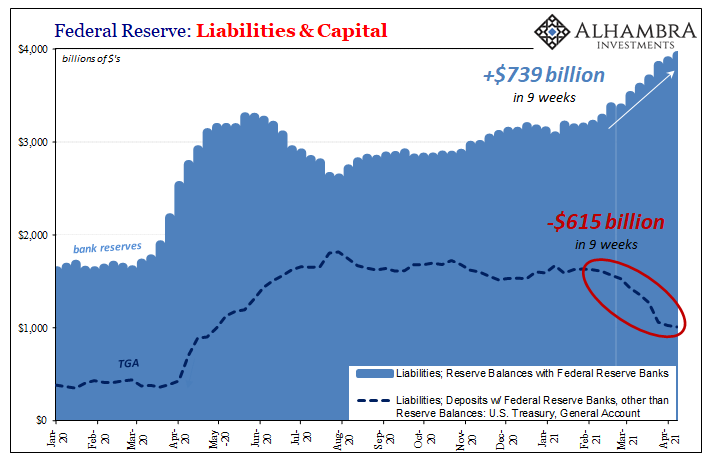 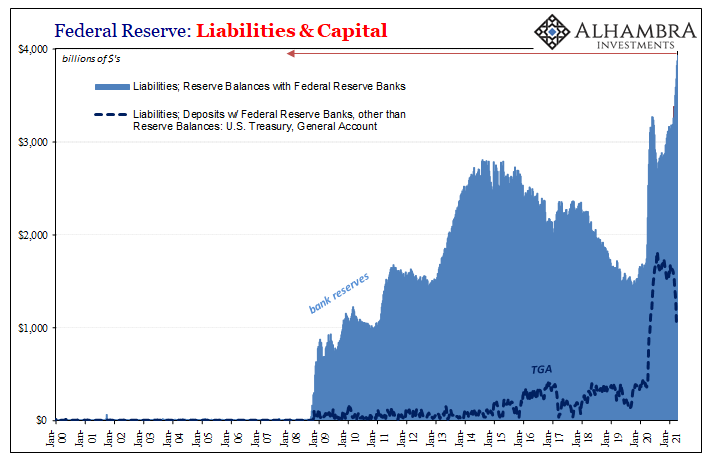 As of the latest figures for this week (Wednesday), during the last nine weeks the TGA has been drained of an enormous $615 billion (50% more than the total balance had ever been at any time before March 2020) while $739 billion has been added (including via QE) to an already-sizable pile of bank reserves now just shy of $4 trillion (a record, by far).

So, it is vaccines, reopenings, government checks already cashed, and a flood of money that is shortly to equal last year’s.

Pardon me, but where the hell is all the inflationary reflation bond selling?

As I wrote at the outset, the real question can only be to which end has taken the lead. Quite clearly, despite this massive flood of bank reserves and fiscal generosity, it’s the short end where the bills trade that has at least stolen the spotlight. 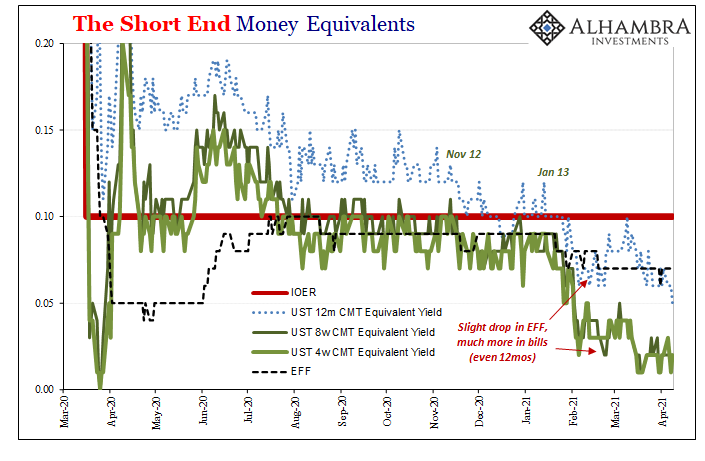 The TGA drawdown has not led to a collapse in general rates as predicted by most “experts”; effective federal funds (EFF), for instance, remains pegged at 7 bps (apart from March 31 quarter end, and even on that day the decline was a single bip). The bills, on the other hand, have continued to be solidly bid only further down the curve.

Even though none of their tenors has yet dropped below zero, they are each and every one being compressed by…something. As each instrument closes in on a possible negative rate, buyers are first switching into one a little further down the curve in a sort of slow-motion domino effect, one which likely continues until the front end all the way out to 52-weeks plots a nearly straight line at around 1bp if not zero.

And then, perhaps, the negative rates. The 1-year (52-week) instrument is the last to be pulled lower, quite obviously diverging from the shortest term notes at 2s and 3s.

Why only the bills? 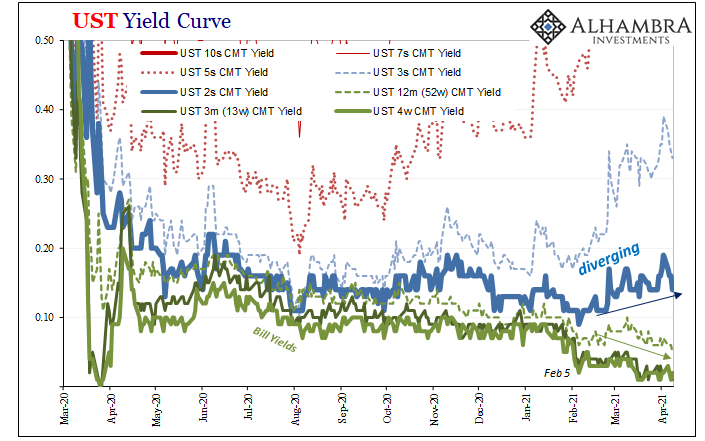 The answer to that question I’d already written out above when referencing how this year’s flood of bank reserves is nearly as much as last year’s; meaning, though last year’s was a huge deluge of bank reserves it sure wasn’t money (see: inflation, inverted TIPS, eurodollar futures, etc). And so, while this year’s is nearing similar proportions, it must also feature that same handicap.

The Treasury market – indeed, global markets – are ignoring this puppet show with bank reserves and TGA’s yet again. Even as the fiscal stimulus roars in a very real way, dropping full-blown into the hands of the unfortunate and fortunate alike, there’s just no love for the “money” outside of stocks.

Fed data says one thing, the mainstream media always parroting, while bonds and notes are now, in the short run, anyway, hinting at another. The same thing that I maintain is driving bills, the wrong end the wrong way.

Even the Fed (staff, anyway) is beginning to figure out that the system is more complicated than the mainstream theories surrounding it. Collateral most of all (SFT, officially).

How does it really work, theory v. reality?

The bill market caught some mainstream notice a couple months ago, but it was quickly thrown under the more comforting, accommodating sell-off at the long end. Bills, however, didn’t go anywhere in the meantime; they’re still here compressing. The long end, meanwhile, it isn’t going anywhere anymore even though, conspicuously, very curiously, everything, and I mean everything by all that is Bernanke, is flooded to what we’re always told is the good side.