Weekly Market Pulse: Nothing To See Here. No, Really. Nothing.

Weekly Market Pulse: Nothing To See Here. No, Really. Nothing.

The answer to the question, “What should I do to my portfolio today (this week, this month)? is almost always nothing. Humans, and especially portfolio managers, have a hard time believing that doing nothing is the right response….to anything…or nothing. We are programmed to believe that success comes from doing things, not not doing things. And so, often we look at markets on a day-to-day or week-to-week basis and think something of significance happened and we ought to respond to it. Most people, according to this recent article in Nature, “consistently consider changes that add components over those that subtract them — a tendency that has broad implications for everyday decision-making.”. That is certainly obvious in most of the investor portfolios I’ve reviewed over the years which tend to look a lot like a financial episode of Hoarders.

What happened last week? Nothing. Or at least nothing of significance. Yes, there were some economic reports and the Fed released the minutes of its last meeting – as if everyone on the planet doesn’t know what Jerome Powell had for breakfast and that he isn’t raising rates until some really pricey cows come home. Well, actually, I guess it is IF some really pricey cows come home. The PPI report last week didn’t make a ripple in the markets, but the commentariat was all on Twitter about inflation and economic overheating and whether Powell might raise in rates in 2 years or 3. The market was not impressed. The 10-year Treasury yield moved all of about 1 basis point last week while the 10-year TIPS moved, hold onto your hat, 5 basis points. Gold was up less than 1% and the dollar “plunged” (as one website put it) by 0.85%. There was obviously nothing in the data released last week that wasn’t already expected or dismissed for some reason. No surprise, no change in outlook, no change in markets, and no reason to do anything but read and research, which is how I spent my week.

There were some interesting things going on last week and there was some interesting data released even if it didn’t move markets much. Jobless claims continued to defy the consensus view that the US economy is recovering robustly. Now, it does seem to be a bit of an outlier in that regard, so it may be that there is something wrong with the data. Or maybe – I’m just thinking aloud here – when you give people a bigger incentive to file for unemployment benefits, like another $300/week, well, they do. What do they have to lose really? They might get turned down? My Dad always told me you don’t generally get what you don’t ask for so I’ve never been shy. And apparently neither were some 744.000 souls who asked for benefits last week. Will they all get what they ask for? Probably not, but given the efficiency of state unemployment systems, their odds probably aren’t that bad. Jeff did a thorough rundown of the jobless claims divergence here.

We also saw unions lose their bid to unionize an Amazon warehouse in Alabama, which I don’t think was all that surprising but may have produced a market reaction if it had gone the other way. A lot of states have moved ahead with state minimum wage hikes rather than wait for a national change, which has the inflation worriers worried. Rising wages is one of those double-edged swords, no doubt good for the folks getting the raises and probably not very good for the companies who have to pay them or the consumers who buy the products they produce. Maybe. Suffice it to say the argument over higher wages is all bundled up in the inequality debate and there isn’t a one-handed economist anywhere. Still, I think there was some worry out there about President Biden’s obeisance to unions and what impact that might have on inflation and profit margins. Unions only represent a little over 10% of American workers – most of whom work for government – so they don’t have much way to go but up. The loss in Alabama was decisive – 71% against – so I’m going to assume that Amazon workers are pretty comfortable with their employment situation. Wages are rising without more union participation though, so the inflation fusspots may be onto something – eventually.

We will start to see, over the coming weeks, whether the economy is really going to slingshot out of the COVID hole. Sentiment seems overwhelmingly positive with almost everyone assuming we’re about to put up some big growth numbers and of course, we may. But that’s already reflected in today’s market price (with some notable exceptions like bonds but never mind that). Markets – individuals – are already thinking about what happens after that, after everybody goes out to dinner and takes a trip or goes to a baseball game or throws a party. What then? Or what if, God forbid, we get another wave and the re-opening boom is delayed again? Or what if we do get a surge in services spending – leisure activities – but it’s offset by a pullback in goods spending? Markets would, as they say, adjust. But there was no new information last week to move the debate and markets reacted accordingly. So, be patient and don’t just do something, sit there.

Last week’s economic data didn’t move markets but it did have some interesting bits. The ISM Non-Manufacturing PMI hit an all-time high which further supports the boom narrative. It might not be a great omen for stocks though; high PMIs are actually associated with lower future stock returns. Job openings also hit an all-time high even as jobless claims rose again. Exports fell while imports were flat, reinforcing the idea that the US, even if it isn’t all that great, is a lot better than the rest of the world. The wholesale inventory report was interesting too, as the inventory/sales ratio fell significantly. Traditionally one thinks of a falling ratio as being a good indication for future production and that is probably right again. But needing to build inventory and being able to do so are not the same thing. Supply constraints are popping up everywhere and sales are rebounding. Which is exactly what you would expect from a supply shock like COVID-19. Textbook stuff in fact. If we open as fast as the consensus seems to expect, we can probably expect to see more shortages and maybe some price increases. The rest of the world’s COVID issues will not be confined to the rest of the world even if the virus is. 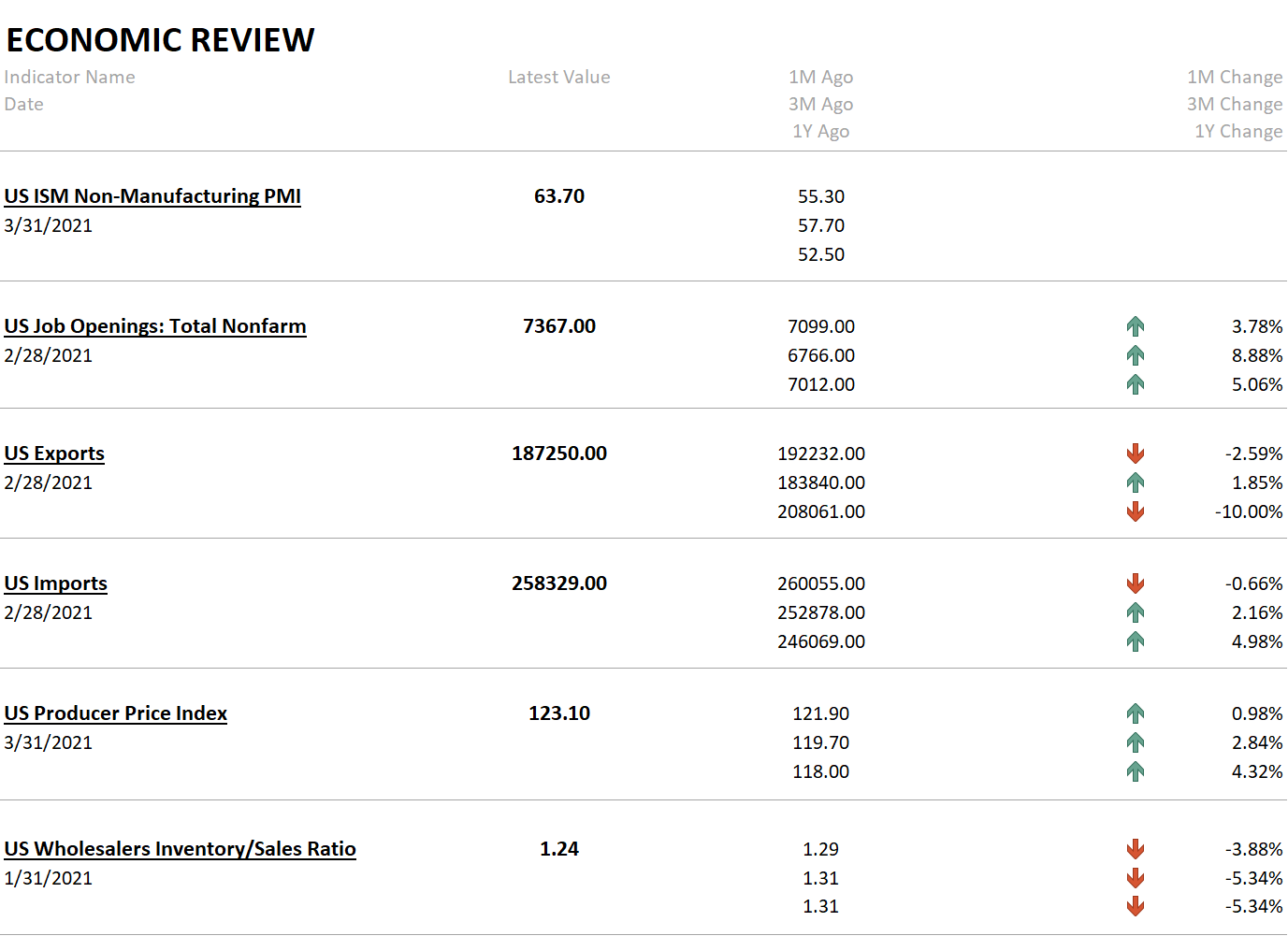 We get a lot of data next week, including more inflation data which will no doubt be blown out of proportion. Retail sales should give us a glimpse of how the re-opening is going. We’ll also get a look at housing starts, which weren’t very good last month. 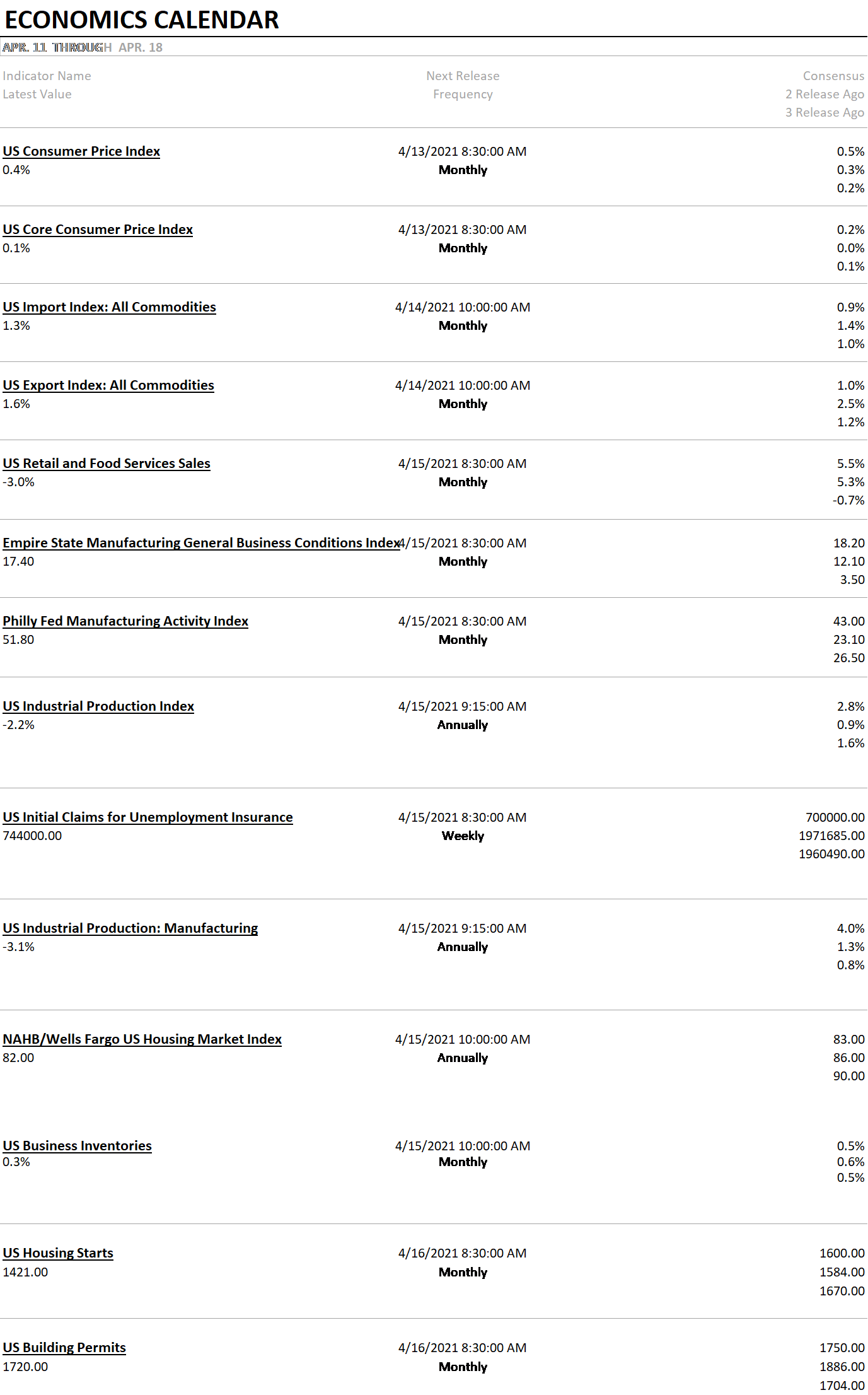 As I said, markets were quiet last week. In fact, the volatility index (VIX) fell to 16 and change, the lowest it has been since before the virus started shutting things down last year. Large-cap growth stocks did have a good week but are still losing YTD. The value versus growth debate didn’t change last week. There is still plenty of scope for further gains in value relative to growth as the reversion to the previous trend continues: 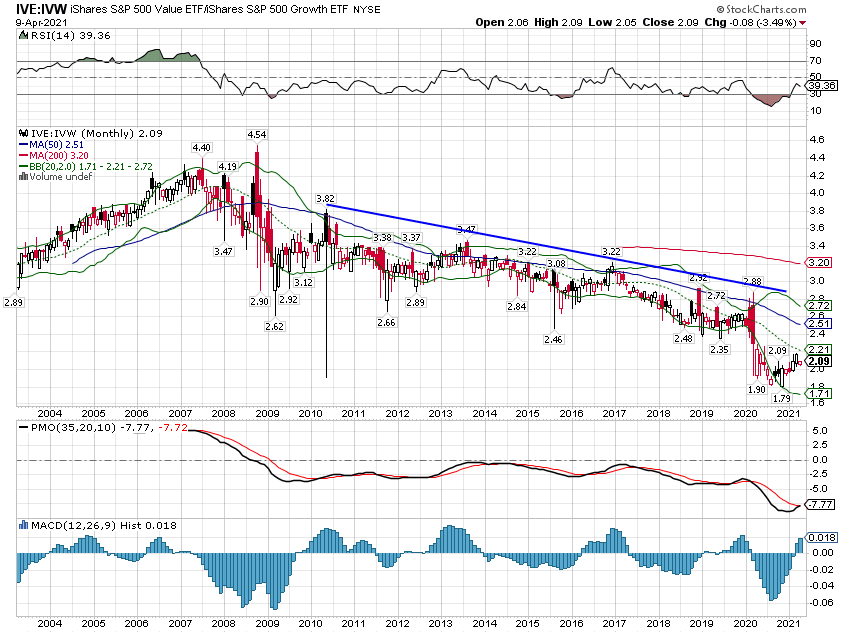 Emerging market stocks were down last week, continuing a correction that started in February. EM was driven by China, down 2.2% on the week, while many other emerging markets were higher. Latin America, despite Brazil being a complete mess on COVID, was up over 2% on the week. Commodities, down over the last month, are still the leading asset class YTD with small-cap right behind. Both of those have been correcting a little lately, but nothing that is a trend changer. 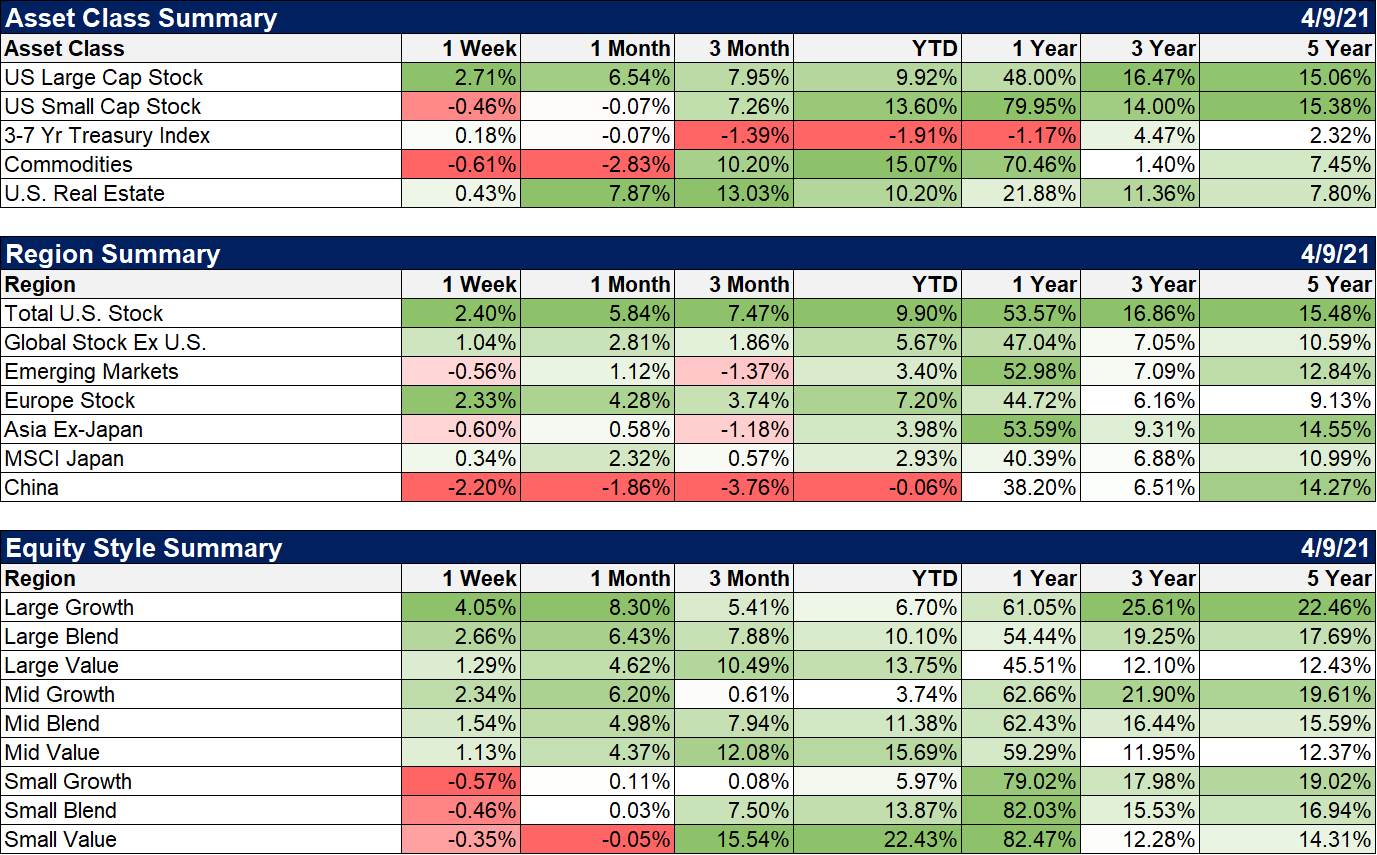 Energy was the only sector down last week but like commodities generally, this is just movement within the trend. Nothing has changed. There’s been a lot of talk about the performance of energy and financials this year, the former a beneficiary of re-opening, the latter responding to a steeper yield curve. What is interesting is that we’ve heard almost nothing about REITs whose performance is slightly better than financials and only a little behind energy. Real estate is also, obviously, a beneficiary of re-opening. And while retail may never be the same, I expect office to do just fine. Companies want employees in the office and I think just about everybody is sick of working from home. There are some nice things about WFH but maybe it’s better on a part-time basis. 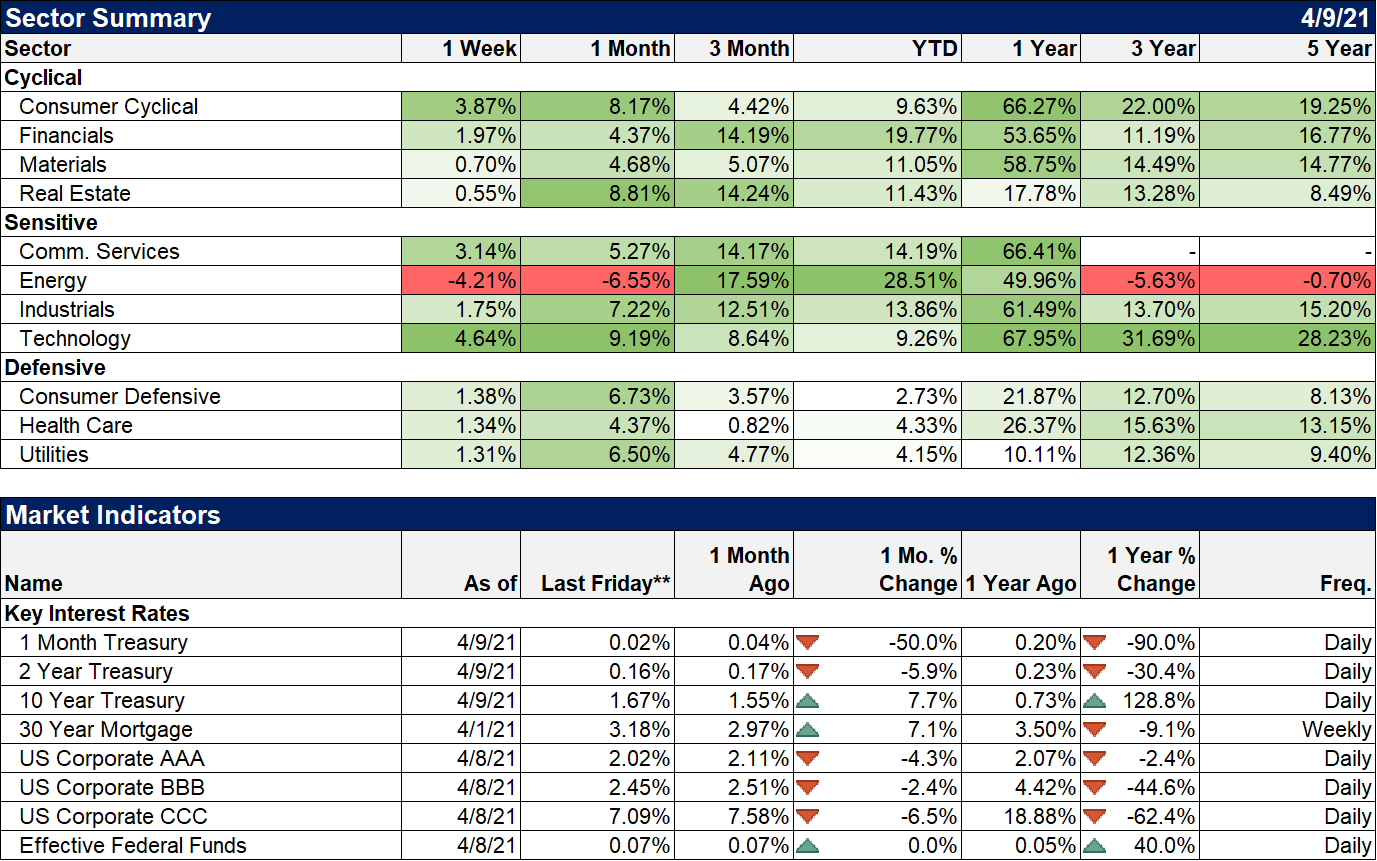 There are always things to do as an investor. Research needs to be done. Proxies need to be voted. Earnings reports need to be reviewed. But that doesn’t mean you need to buy or sell something. Resist the urge to micromanage your portfolio; the correlation between activity and performance is negative. Besides, it’s spring. Go outside. Smell a flower. Have a picnic. And don’t worry. You won’t miss a thing.