Another Hundred Trillion For The Library

Another Hundred Trillion For The Library

Words have meaning for a reason, to convey precise ideas easily and readily understood by the reader or listener. If you use the term “stimulus”, as its root already suggests you’d expect something to be stimulated by whatever is being classified using this specific grouping of letters/sounds. Context rounds out the meaning.

For the last twenty years, you’d have been wrong to associate the term in the monetary context with its definition. QE was born in March 2001, and from its very first day it has been called “stimulus.” Yet, going back to its genesis, the idea’s creators weren’t really sure it would amount to much. Discussions held in private were very different from those offered to the public.

None of those words have ever applied to the program. Two decades later, the actual science is very clear on this point. Even studies conducted by the central banks who have used the tactic, those whose researchers are often palpably desperate to find and sugarcoat any gray area in order to shade it favorably in QE’s direction, these most charitable of reviews can only ever say at best the thing maybe helped lower interest rates a touch more than the market had/has.

Inflation? Economic growth? Recovery? Forget it. Government bond yields drop on liquidity and safety preferences and here comes the central bank to arguably lower already low rates a few bps more. If you’re wondering how this might help, you’ll have to get in line behind all the central bankers standing there already these last twenty years hoping to eventually figure that out.

Since it sounds so ridiculous, so outlandish and the complete opposite of how this stuff is written about – even today – in every single financial media story, you’d think I’m making this all up. I only wish I was (and this is but a small sample spanning QE’s entire history): 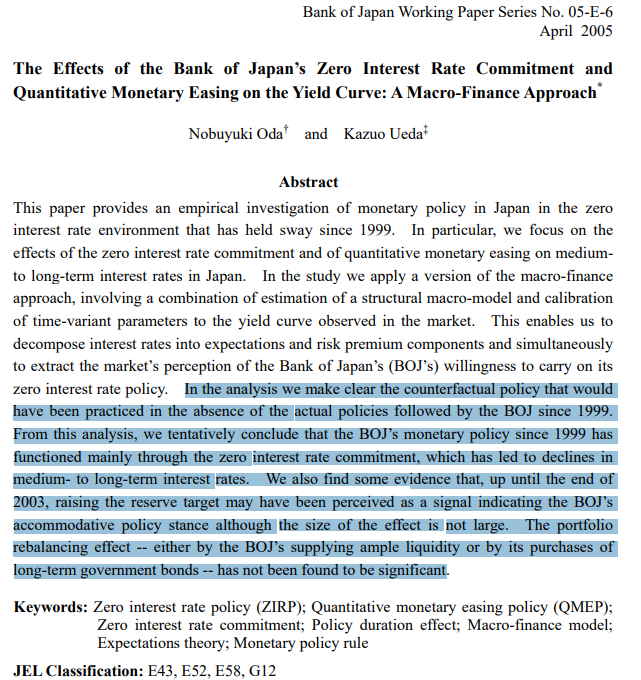 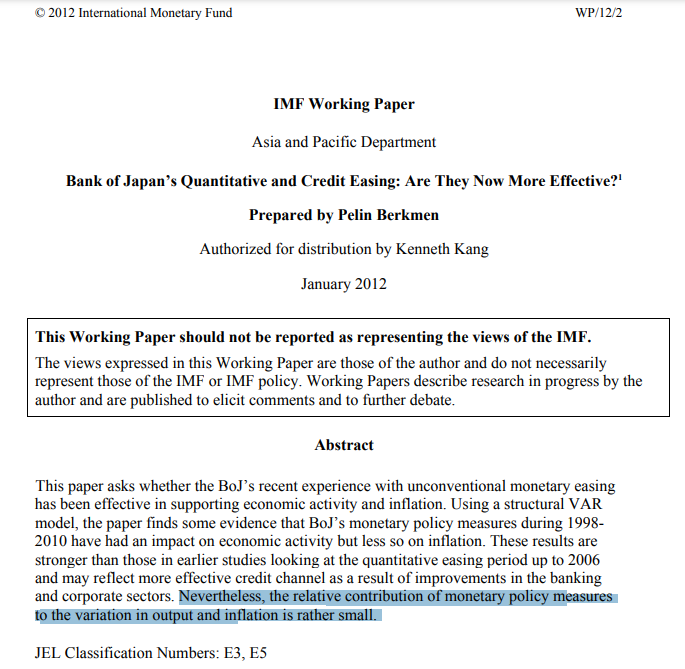 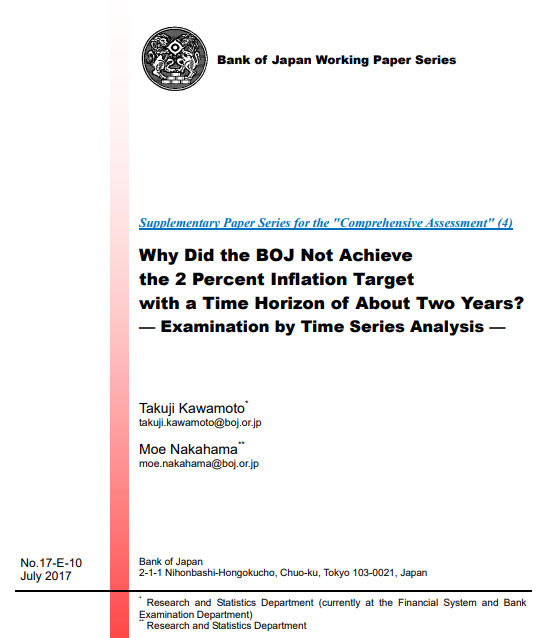 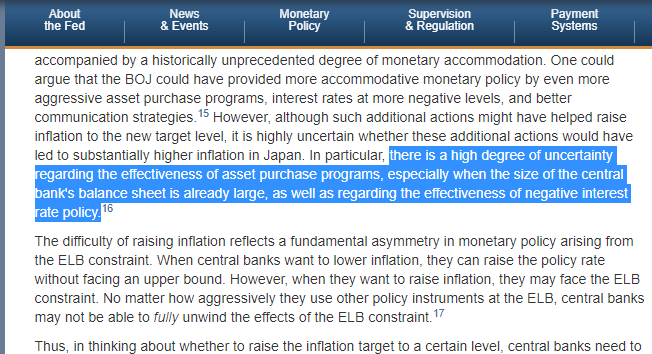 Japan started all this – as the Japanese are the voluntary pioneers for all of these dumb ideas – and so over there in 2021 of course inflation is still deflation. The last estimates for their CPI show minus signs at the headline (-0.1% year-over-year, March 2021) as well as for the core rate which stands for the latest version of QE’s (now QQE’s) target (also -0.1% year-over-year).

That’s an entire year of, as the media still calls this, massive “stimulus”, tens of trillions of yen “poured into the real economy” supposedly like overflowing water breaking free from behind some dam deeply rehydrating if not overflooding across the scorched economic landscape. In Bank of Japan terms, going back to last March its balance sheet has expanded by a useful ¥129 trillion (with a T), the remainder in bank reserves rising by ¥86.3 trillion. 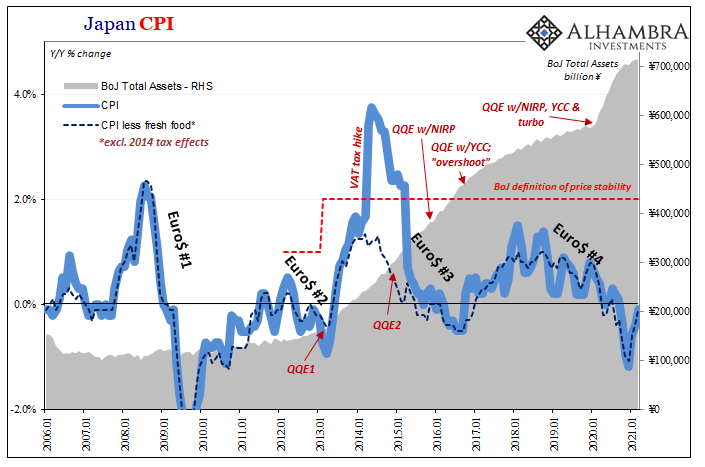 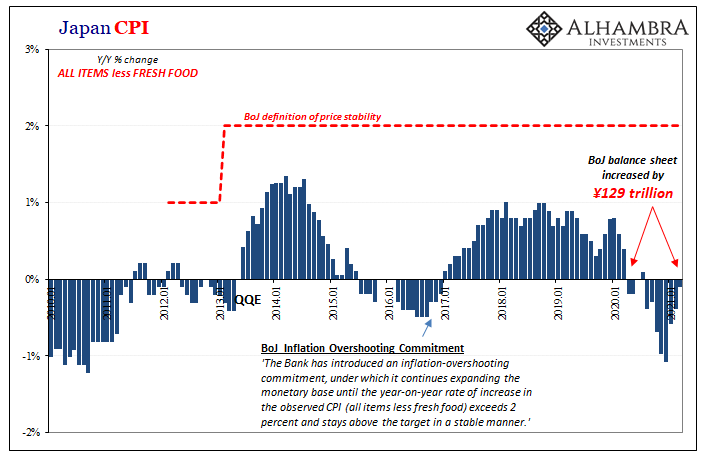 I write that these numbers are useful, not the bond buying. The increases here yet again leave no doubt, so huge as to be unequivocal in their damnation of QE, QQE, or whatever letters are employed to sell and brand it for public consumption. It cannot be more than ¥100 trillion in “money” “poured into the real economy” results anyway in an entire year of more outright deflation.

On the contrary, the real-world outcomes are perfectly, just perfectly consistent with the endless catalog of academic studies which have always told you – if you knew they had been written – to expect little or nothing from this absurd puppet show. They all conclude, every last one, how QE produces negligible real economy effects including inflation; just what Japan demonstrates now.

This is the weird part; quantitative easing has been the most tested monetary program in human history, the results uniform and consistent under each of them. And yet, hardly anyone knows this because central banks need to keep up this lie of omission.

Here it is yet again just days ago:

The Bank of Japan is expected to cut its inflation forecast for this fiscal year in quarterly projections due out next week, three sources familiar with its thinking said, reinforcing market expectations it will maintain its massive stimulus for the foreseeable future. [emphasis added]

This is the real printing press as it always has been. Going back to its very start, QE has never once been money printing – only a very desperate Jay Powell teed up with softballs by a compliant 60 Minutes correspondent would even think of broadcasting such a direct lie. Usually, they just let the media keep spinning, as it dependably does. 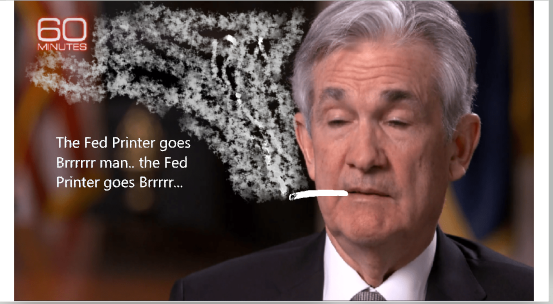 So long as it does, nothing changes. Another key reason why yields in Japan, the US, Germany, Australia, etc., etc., can remain so low as they do despite “trillions being poured into the real economy” in all those places. There are trillions, to be sure, but nothing is going into the real economy except mangled words.

If these people had any real idea what they were doing, they’d stop doing this QE crap. And if they had any real conscience, they’d begin correcting the public record immediately and without prejudice. But we all know officials possess neither the will nor the integrity to come clean in public.

The truly sad part is all this data is publicly available for anyone and everyone; CPI, balance sheet figures, and even the exhaustive library of academic work each one set out to prove QE right only to become just the latest to re-establish it’s all wrong.

Media stories, like academic studies, these are the only things QE has ever actually stimulated in twenty years. 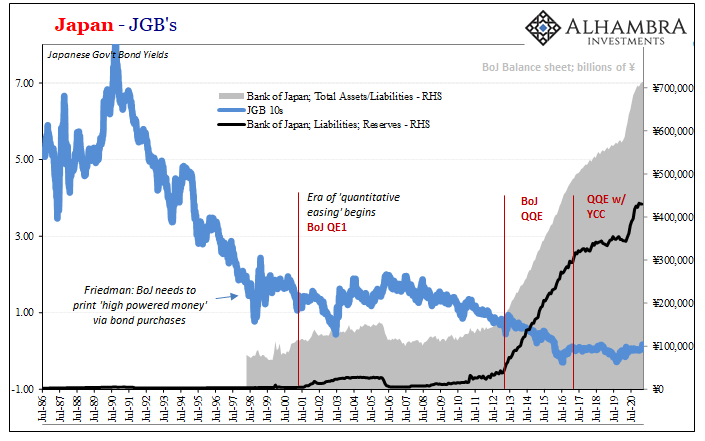