Well, That Clears Up Nothing

Well, That Clears Up Nothing

Disappointing some, US real GDP managed to come in 6.2% higher in Q1 2021 when compared to Q4 2020. This was slightly less than the “consensus” which had figured around 6.6% growth and then the more optimistic calculations including the Atlanta Fed’s GDPNow tool that had only yesterday pointed to 8% (with some outlier whispers dialing up double-digit gains).

Even so, the data was either amazing or confusing, depending upon your perspective which can change under different types of analysis. The US economy has performed better than had been figured a year ago, but what exactly does “better” mean for the long run? Enough better?

To start at the top, the sequence of -5.1% in Q1 2020 (the first of the recession) followed by the big shutdown and GFC2 yielding -37.7% in last year’s Q2, then +28.8%, +4.2%, and now +6.2% leaves seasonally and inflation adjusted output just about 1% below the Q4 2019 prior peak. More to the point, it’s still nearly 4% less than where the economy “would” have been had there not been a recession in the first place (or had a full recovery materialized before the first three months of this year). 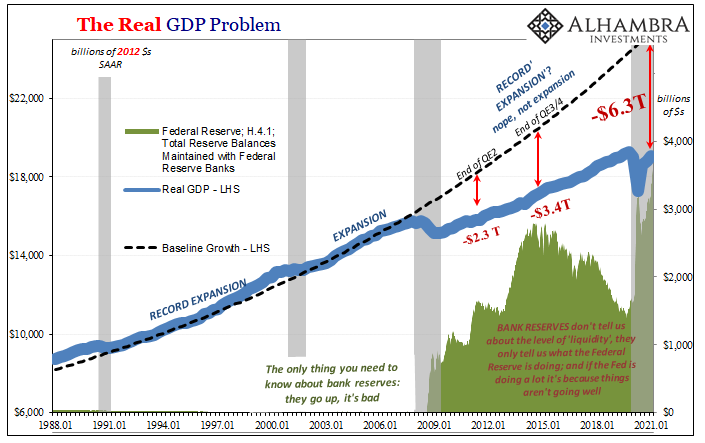 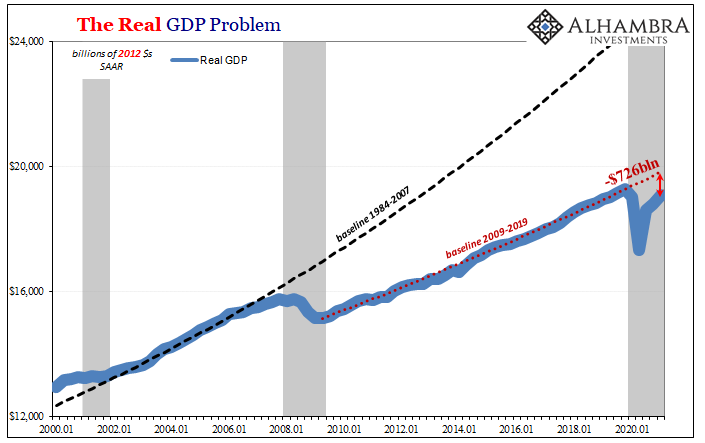 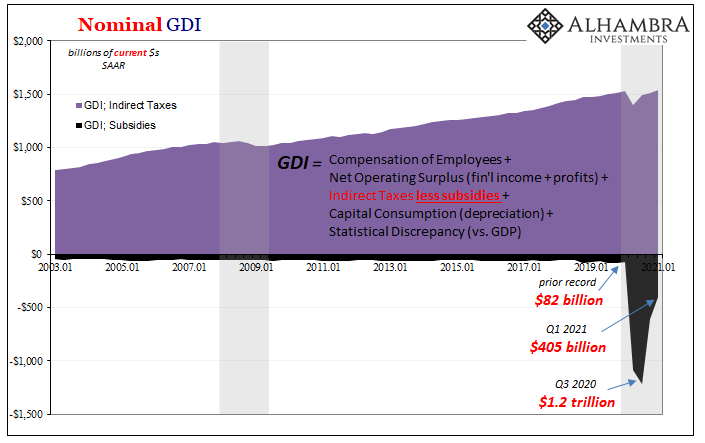 Is this a sign of success, even of having created too much? That’s where the questions only begin given that much of these increases are not the economic results of organic processes. These are artificially boosted estimates of an artificially “drenched” system indicated in the huge hand of Uncle Sam (GDI’s view of it, stipends, was still more than $400 billion SAAR in Q1).

On the one hand, only 1% below peak and “just” 3.7% less than baseline (even if that baseline wasn’t good). On the other, trillions in “stimulus” and this is as close as the government (not the Fed) could manage? Why not bursting upward above either of those comparisons before now?

For one, the headline estimate was negatively impacted by imports over exports (the latter a concern about how the rest of the global economy is even more questionable than this US rebound) as well as a pretty sharp drop for inventory. Some will say production bottlenecks and supply chain issues account for this, but as we’ve noted for almost a year production across the US and global economy seems conspicuously unwilling to embrace the positive interpretation.

That meant for all the buying in goods, much of it came out of previously restocked inventory rather than both rising spending and rising inventory (recovery). 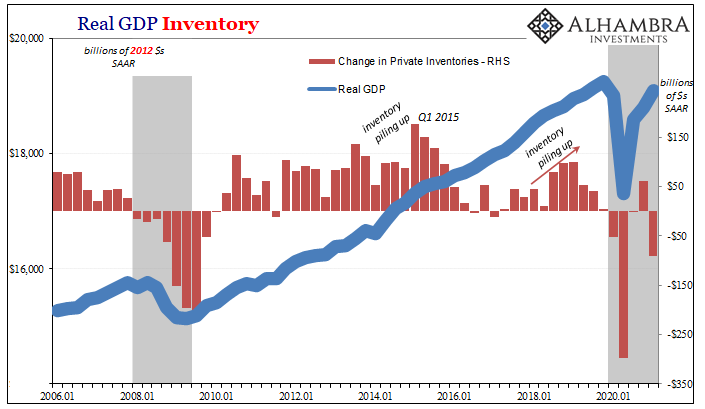 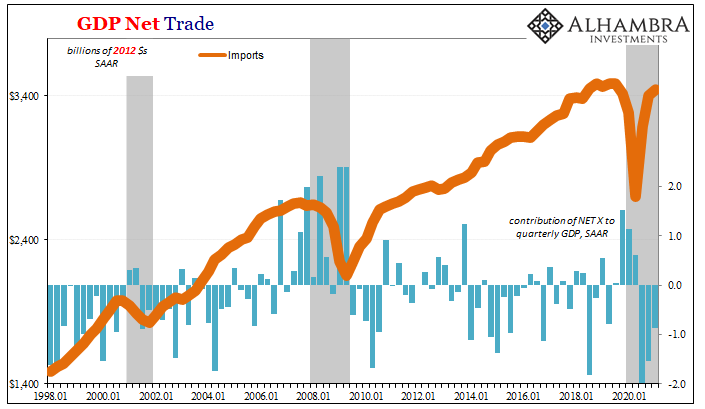 Interpretation of all this data is in the eye of the beholder. We can clearly see and count the non-economic influences especially in consumer spending on goods. As noted yesterday, as expected, while the frenzy in particular durable goods has exceeded every prior sense of proportions, likewise producing a distorted picture of the economy, spending on services remains significantly underwhelming – a rather naughty 5.7% deficit when compared to services in Q4 2019.

Even GDP pricing calculations lack forthright clarity. While the inflation numbers in GDP, those watched most closely at the Fed and by Economists (FWIW), aren’t anything like the “overheating” or “out-of-control” and “red hot” economy often spoken about in mainstream commentary, the numbers are entirely unremarkable across-the-board; which is itself a potentially key indication. 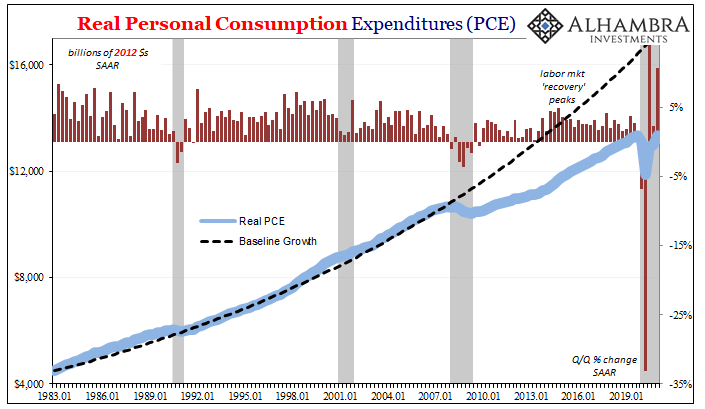 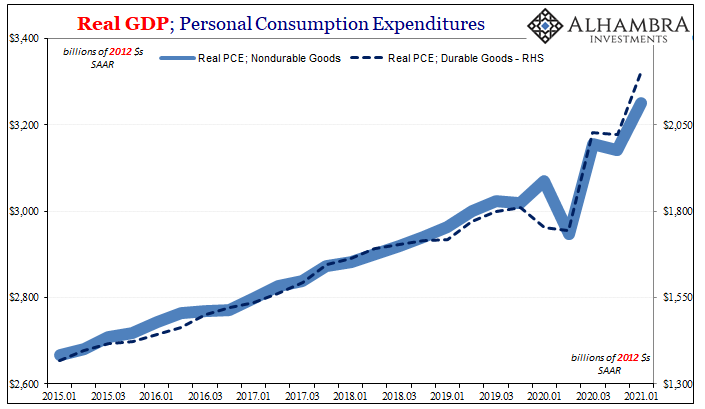 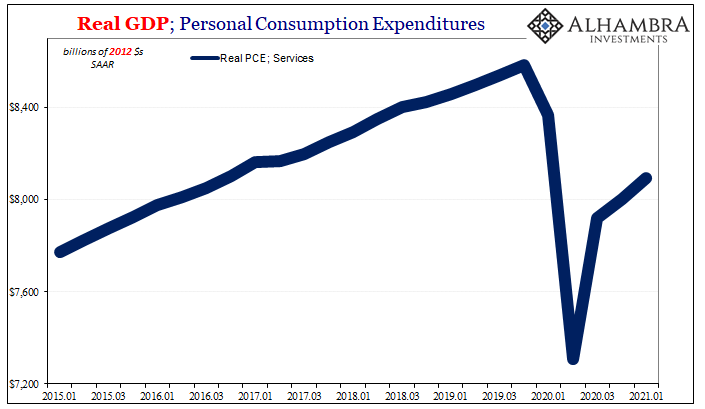 The implicit price deflator (PCE) was up at a 3.5% annual rate (Q/Q), just less than Q3 2020’s 3.7%, around the same levels as 2011 when the economy fell under similar circumstances (and also when Ben Bernanke, as Jay Powell today, correctly used the word “transitory” to describe price changes). That rate was driven entirely by goods, the deflator in this segment up a 5.4% annual rate (Q/Q) which was deceptively wide.

I write that it was deceptive because, well: 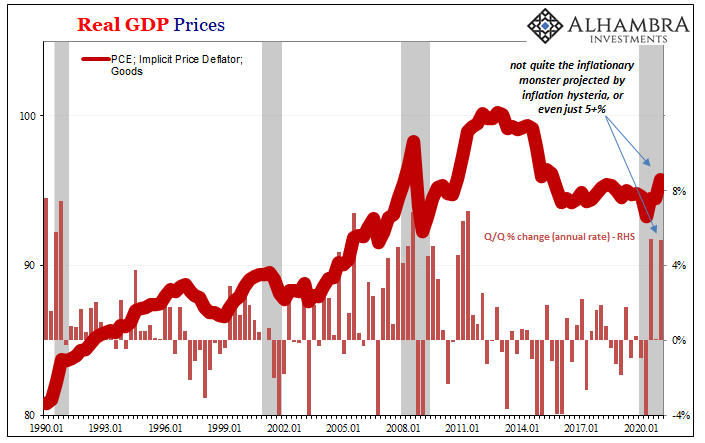 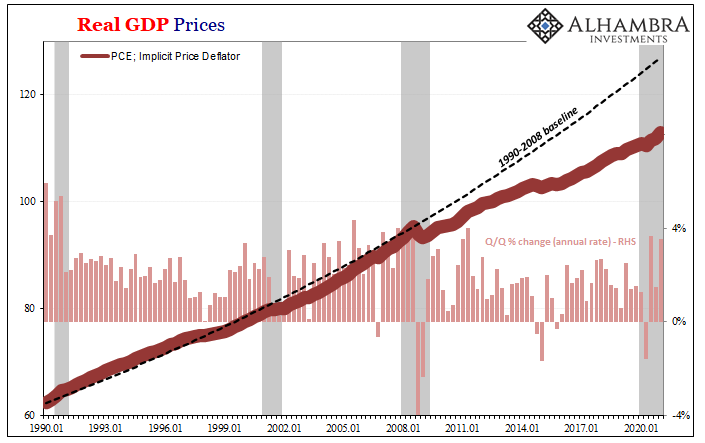 Goods inflation, according to these BEA figures, is little more than a supply side-fed rebound pushed forward by commodities that has barely boosted the index above its previous multi-year (2015-20) low levels. Being up 5% in a quarter isn’t the same thing as it might have been had prices behaved differently (as had been expected and forecast) during that half decade undershoot.

Without any convincing acceleration there, service sector inflation was by comparison practically uninteresting. At the same time, so, too, was the so-called core rate. 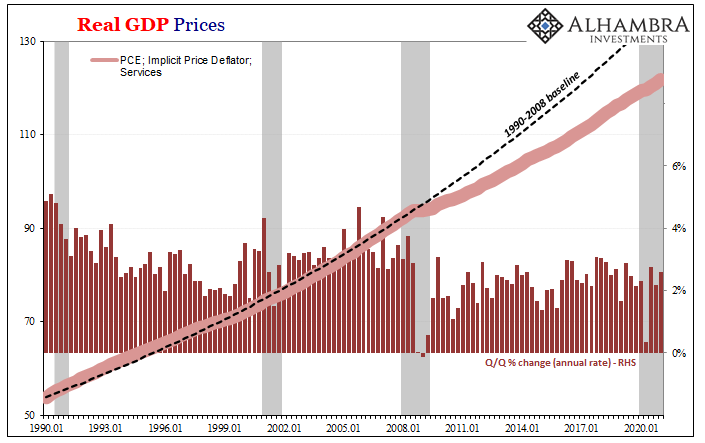 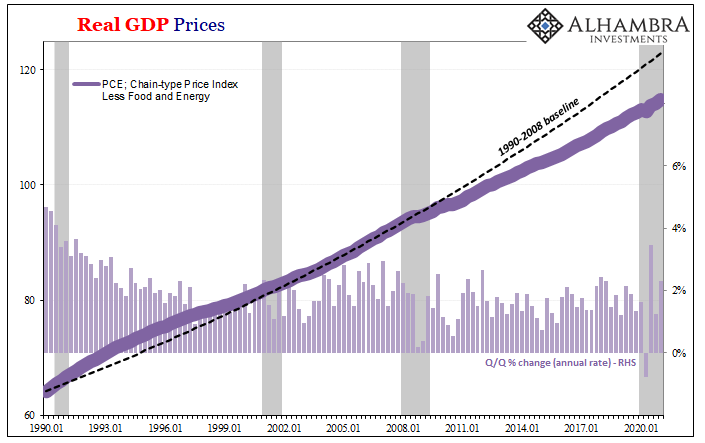 As with the rest of it, we can either take these numbers and marvel at how they weren’t worse (especially the beaten down service sectors) or, if you so choose, look at the same and wonder why they haven’t been so much higher given the trillions and the utterly furious binge in goods being fed by the feds (and the inflation hysteria accompanying it).

There really wasn’t anything in the GDP report which was conclusive. Maybe there should have been given how everything was stacked up supposedly on the plus side; including, as reported by many, inflation. Perhaps the undercutting the GDPNow or better forecasts is itself significant. For their part, Powell and the Fed remain on solid analytical ground with their “transitory” inflation expectations given what the BEA has now provided.

The other part of “transitory”, what was maybe exposed in a way by these GDP estimates, is how this doesn’t necessarily set up the overheating scenario, instead leaving a lot of uncertainty as to what happens when the Treasury tap is turned off.

And then reopening itself; more services at the expense of goods would only further tame goods inflation, and could be what producers and sellers are waiting on – why inventory declined so much in Q1. 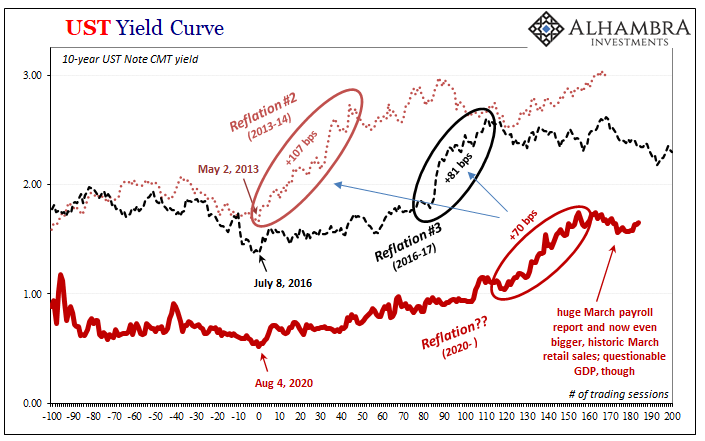 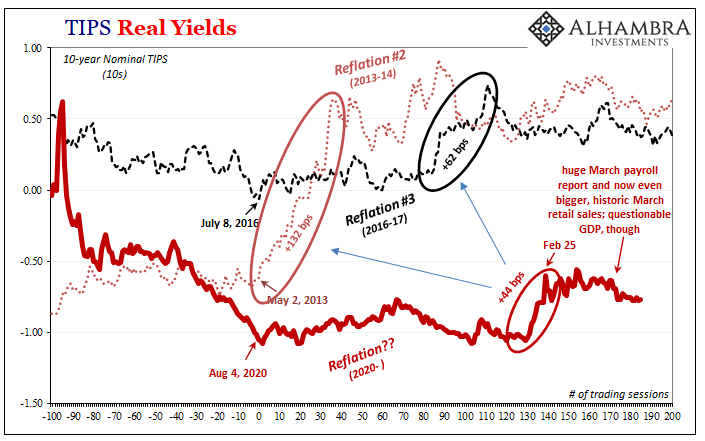 No matter your perspective, there was nothing really satisfying nor convincing here. Even the Federal Reserve might be able to claim “jobs saved” via QE, far distant second chair to the feds’ helicopter. It hasn’t been as bad as feared for…unclear reasons. Even then the net result is an economy still very much and substantially behind (forget the $6.4 trillion shortfall to its pre-GFC1 baseline) with so many unanswered questions as to if or when it gets out of this one – or, perhaps more to the point, gets out and is able to stay out.

Very little movement in bonds today, with real yields doing next to nothing. Seems appropriate given what little the BEA did report.