SOMA’s Been Talking For Over A Year: Jay’s Got Some Explaining To Do (bills)

SOMA’s Been Talking For Over A Year: Jay’s Got Some Explaining To Do (bills)

This goes back to the earliest days of the Federal Reserve. In 1912 and even before, in order to sell the skeptical public on another central bank – the nation’s third, and first in three-quarters of a century – in what was already going to be an uphill battle, Congress demanded that this thing be called something other than a central bank before then supporting itself without becoming even the smallest burden on taxpayers.

This requirement meant some level of “investment” on the part of the new monetary authority. It would need to acquire low risk “earning assets” to earn a return so as to pay its own costs, of which US federal government debt easily qualified.

There would arise any number of other reasons for the Fed to buy and own Treasury securities, too. One quick way to raise or lower the level of bank reserves is to either buy or sell UST assets, or what are known as Open Market Operations. These predated QE by a very long time, and to conduct any “tightening” OMOs assets must already be on hand in the System Open Market Account (SOMA) for them to be sold to depository banks.

In other words, for reasons having nothing to do with “monetizing” the government’s reckless spending ways the Federal Reserve has held an enormous portfolio of securities including federal government debt. In fact, you hardly ever heard much about this in the pre-crisis era even though, during the first quarter of 2003, for example, Alan Greenspan’s FOMC had given FRBNY’s Open Market Desk the authority to buy and hold $633 billion in UST’s of all kinds.

At the time, as spendthrift as the Bush 43 administration had already been, total public (federal) debt outstanding was a reported (by Treasury) $6.46 trillion. This had meant that in Q1 ’03 the Federal Reserve’s SOMA portfolio contained 9.8% of outstanding government debt.

This wouldn’t become a topic of keen mainstream interest until later in 2009 into the era of QE, “money printing”, and debt “monetization.” The inflationary guarantee was often, if not almost always, underwritten by sensationalizing SOMA balances along with the bank reserves (the “money printing” part) created to elevate them.

In fact, believe it or not, it wasn’t until the end of QE2 in 2011 that the Fed’s holdings of UST’s equaled in proportion what it had been eight years before. 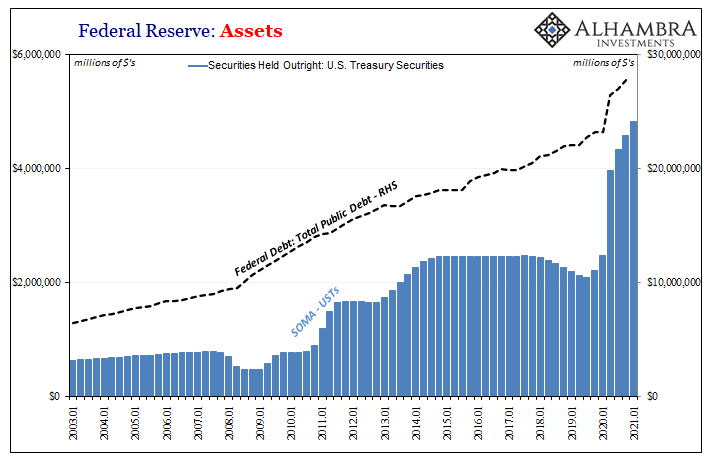 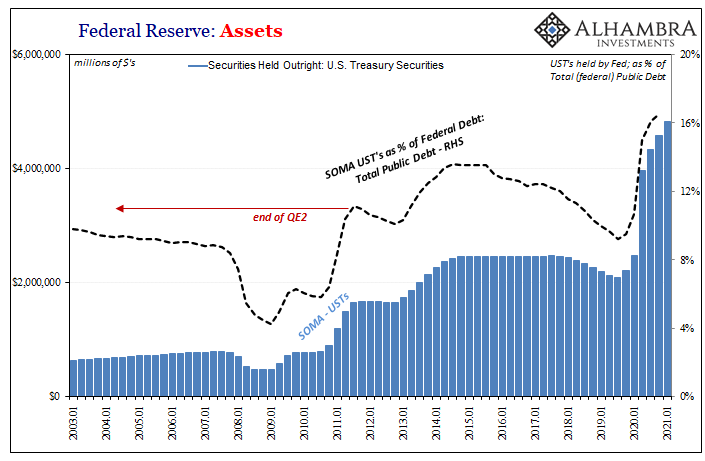 Now, what fiscal hawks will say is that both SOMA and federal government borrowing were rising rapidly at the same time, therefore without the Fed the feds wouldn’t have “gotten away with” such a massive expansion in public debt. Yet, the fact remains that the UST yields acted independently of either QE (TOMOs) or Bush-Obama-Trump budgetary lawlessness.

For reasons not adequately explained, even by central bank research, yields like inflation only went the wrong way over time. By the end of QE4 (QE3 was MBS) in 2014, SOMA owned 13.6% of all reported federal debts. The inflation never came.

That’s not really my point here, either, instead recounting these stats by way of introducing one particular complication of all these things. If there is a key takeaway from them it must be that these money, Fed, and UST matters aren’t so easily straightforward. The nexus between money (and I don’t mean bank reserves, as we will see), banking, central banking and the federal government is often very different than how it might otherwise seem.

Of all what’s in SOMA, hardly much of it is ever T-bills. There are various reasons for this, which we don’t need to get into here. Instead, bill-buying became a specific habit of Jay Powell’s Fed beginning, importantly, in October 2019. That whole not-QE(5) program was designated as such because, Powell claimed, the FOMC could prove to the public this wasn’t “stimulus” by buying only bills rather than notes and bonds. 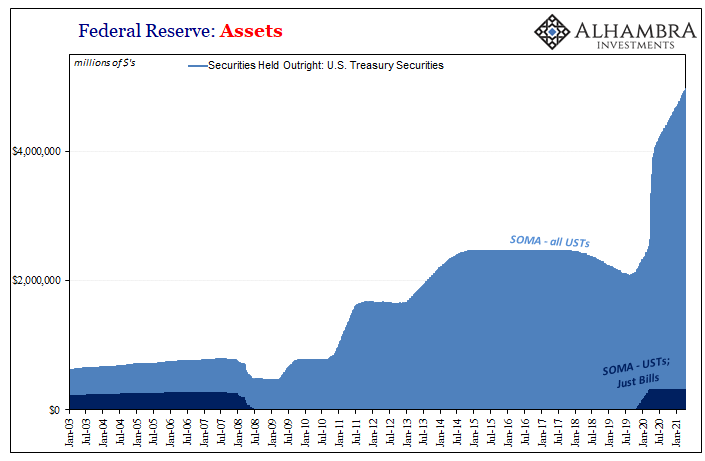 His reasoning was idiotic, but not nearly as much as what he did. As I warned (repeatedly) right from the start, this was courting only disaster. Below from October 10, 2019, the week before the madness actually started up:

The SSAP is what’s coming next. A small scale asset purchase plan whose intent is only to raise the level of bank reserves. A more technical technical adjustment than the four carried out thus far in IOER and the one in RRP. In short, taking T-bills from the banking system and exchanging them for bank reserves.

It’s hard not to think sometimes that maybe the conspiracy theorists are on to something here. When you step back and look at what they are doing, there are moments when you truly wonder if authorities are actually trying to crash the system. At least to make a bad situation that much worse.

The whole bond market screams systemic collateral shortage and these guys think, well, let’s fix it by…removing the best collateral from circulation. Can anyone in such a position really be that obtuse? It has to be on purpose, right?

Lo and behold, when the system’s moment of truth came in late February 2020, the Fed had removed a non-trivial $300 billion of bills. Over the next few weeks of crisis, in order to keep raising the level of bank reserves, Powell’s still-operating not-QE POMO would lock away $25 billion more.

All the textbooks and the financial media say that bank reserves are money and therefore are the most important monetary “thing” in the dollar system universe; certainly more monetary meaningful than T-bills, according to convention.

OK, so then why during the week of March 18 – the very worst of the worst of GFC2 – why was that the week when not-QE stopped buying Tbills? 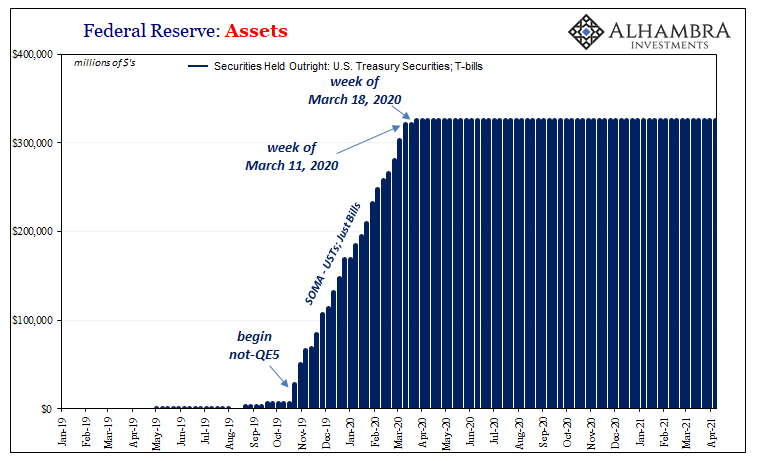 More telling than that, beginning the very next week, March 25, the Fed bought a pittance more in bills and the level of them in SOMA has been absolutely constant ever since. Put another way, at the height of the crisis, when OTR collateral was so obviously missing that even the Fed had to notice, that’s when Powell took his SOMA hands off the best of the best collateral. Mere coincidence?

It’s more than a little weird; the SOMA stats are damning.

What that means is, going back to the beginning, the Fed isn’t monetizing LT UST’s as a means to keep LT Treasury rates down, they’re buying huge(r) numbers of notes and bonds in one part so as to avoid stripping the system of any bills!

Treasury initially sold something like $2 trillion in addition ST paper, and Powell didn’t go anywhere near it.

Even more critical, how is this not anything other than an implicit, tacit admission of exactly what I had warned about in October 2019? Trillions of OFR notes and bonds scarfed up in the thirteen months since the depths of the crisis, and not a single additional bill (again, apart from reinvestments). In so obviously staying away from them, these officials are essentially confessing to the biggest monetary crime of collateral

All the while bill yields continue to drop.

These facts, these objective numbers, they merely corroborate with 58 additional weeks what I wrote early last April in the immediate aftermath:

When even OFR UST’s are no longer as acceptable in repo, and the collateral system begins to break down along OTR and OFR lines within the UST side of that market, when the functioning collateral list gets pared down to just OTR UST’s and nothing else (I’m overstating this, but not that much), it should go without saying that this would be an enormously bad situation.

In the media, and in his own publications, speeches, and press releases, Jay Powell’s Fed was the hero. And you have to believe this in order to get to the inflationary nirvana as told universally across the mainstream. No sir, even the Fed’s own SOMA turns against him and turns him in on that front. Bills not in SOMA first debunk, and then silently speak of the deflationary consequences of non-money monetary policy.