Global Factors First: Was There A US CPI Today?

Global Factors First: Was There A US CPI Today?

It isn’t all base effects, or even all that much of them. Though these were higher in May 2021 than they had been in April, US consumer prices have accelerated regardless. According to the BLS and its latest CPI estimates, the net change in its headline index last month from last May was an excitable 4.99% (unadjusted). That’s the highest since August 2008.

A big part of that was gasoline where the base effect contributed most. Year-over-year, the increase in motor fuel was 56.5% due to last May being the lowest deflationary point (thus far). This is the fastest increase for this item, on average, since 2005.

Even outside of gasoline, prices are up strongly, too. Core consumer prices (seasonally-adjusted) another half a percent, itself the second highest in very long time (only less than April). The yearly increase, both adjusted and unadjusted, was an incredible 3.80%. For something similar in this otherwise less volatile price bucket, you have to go back to George Bush – the elder. 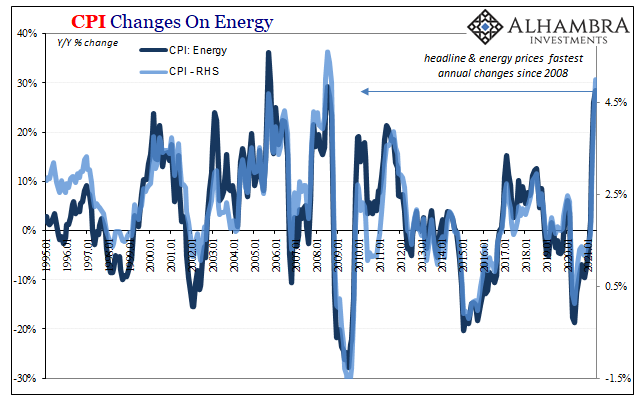 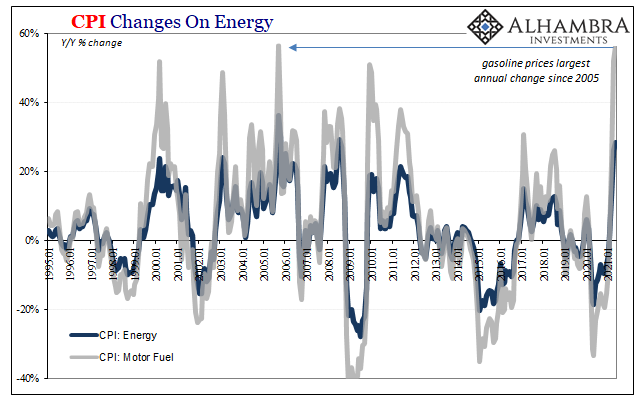 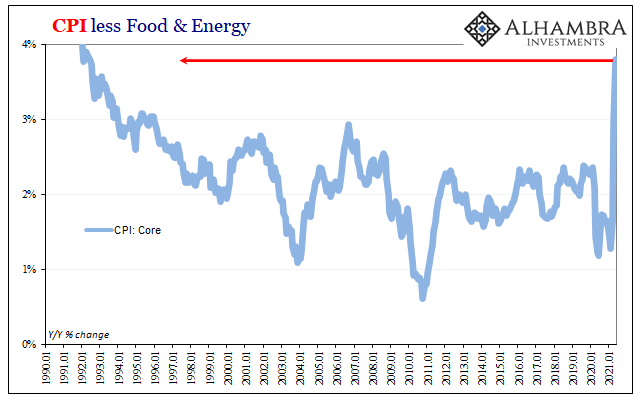 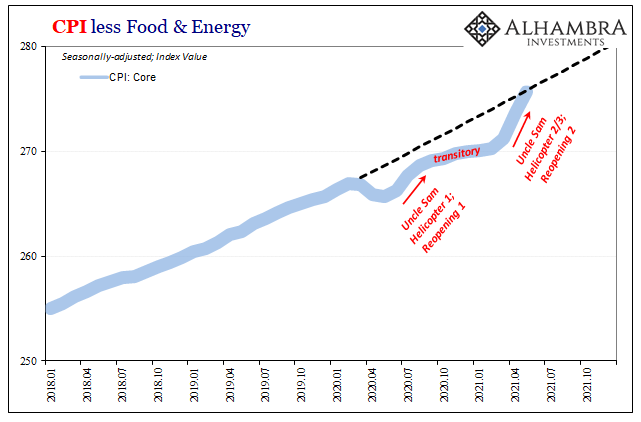 Accounting for base effects in the core measure, the index was up a stout 3.31% when compared to February 2020. Prices are hot, even red hot.

So why doesn’t it seem to matter?

In the media, obviously, this is all wildly confirming everyone’s seemingly rational warnings. Goodbye more than a decade of disinflation and price puzzles, say hello to 1978 all over again – right out of the frying pan and into the fire without having stopped even for a little while at some happy medium in between. Story after story printed of a foregone conclusion, as if there can’t possibly be anyone to disagree.

Yet, outside of this, however, inflation continues to be treated as the outlier possibility; these numbers as well as conditions are being interpreted very, very differently. In the bond market, this makes two huge CPI estimates in a row and two huge CPI estimates that seemingly went by totally unnoticed, certainly unappreciated in that way. Yields today, just like last month, dropped – quite a bit after the initial very modest morning selloff when the BLS published its figures.

The hottest inflation in years, by far, the very thing those predicting a BOND ROUT!!!! have been saying for all that time, and bonds do the entire opposite. For both April’s and now May’s price reports.

What is going on here?

Transitory inflation, absolutely, but more so why the market is increasingly confident about this. After all, if the last two months of consumer prices were at all possibly the first of many more to come, the very last place anyone would be is in these particular instruments. Forget the ’94 “massacre”, any rational chance these inflation estimates continue we’d end up remembering the scars of ’21 for a far longer stretch of the future.

This is not happening for several reasons, I believe, a couple of related cross-currents that, if more than short run themselves, absolutely would undermine whatever price momentum in producer as well as consumer prices. And these things all intersect not just in anti-reflation UST’s, but elsewhere around the world.

Beginning with UST’s, though, there’s the combination of Janet Yellen and Jay Powell. No, not in the way inflation proponents most often propose: theirs being “money printing” and the reckless federal government combining forces so as to have unleashed what we are now seeing just as the beginning.

On the contrary, both Yellen and Powell are, in fact rather than theory, contributing negatively to inflationary pressures by (sorry for the dead horse) removing collateral; the latter intentionally, or inadvertently via intentional policy, while the former because of statute. Yellen gave the system bills by accident in ’20, and now takes them back by accident in ’21 (what a world). 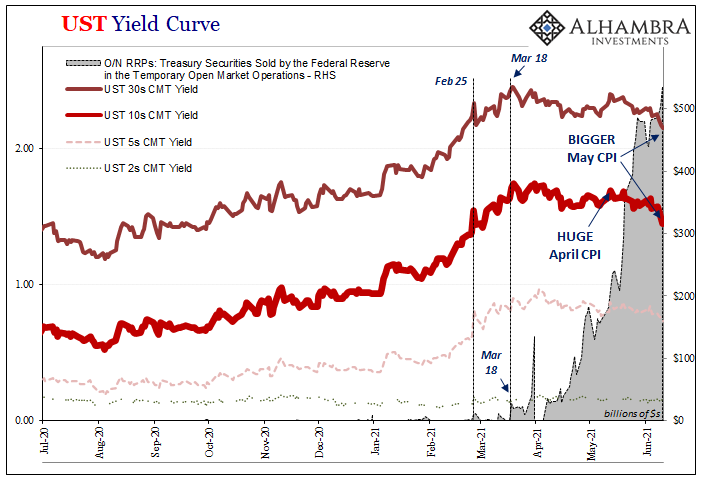 Thus, just as a start, the near perfect inverse correlation between the Fed’s reverse repo and LT UST yields remains perfectly intact. In fact, the big drop in yields today corresponded nicely as RRP usage hit a new high of $534.9 billion, up more than $30 billion just from yesterday.

You just cannot account for this in the “too much money” sense, the same which has been incorrectly alleged as a key contributor to the huge inflation numbers. With the Fed buying up a lot of the best collateral, and Treasury issuing fewer of the best of the best, what must be left for a system where now half a trillion seeks out RRP at zero?

If it is collateral concern/scarcity, and it almost certainly is, no wonder the US CPI hasn’t made a dent in the falling yield trend despite two huge reports in a row.

But I don’t think that’s the end of the collateral problem, either. I believe there is a looming other factor that seems to be gaining, too. This might end up being the greater of the three over enough time. Writing elsewhere for tomorrow:

On top of those, risk aversion has rather quickly crept its way back into the general global marketplace as economic circumstances more and more fail (yet again) to resemble the inflationary narrative; in other words, it isn’t just Treasury yields which are falling since March, nearly every major market around the world has reversed away from reflation with several key places, such as Japan’s JGB’s where their QQE is still ongoing, too, putting in new multi-month lows along with UST’s just this week.

Is this the perfect collateral storm?

Look at the global bond market; multi-month lows all around, especially Japan and Oceania. Even German bunds have turned right around after having been the lone reflationary bright spot over the past three and a half months since the (Fedwire-induced) inflection. 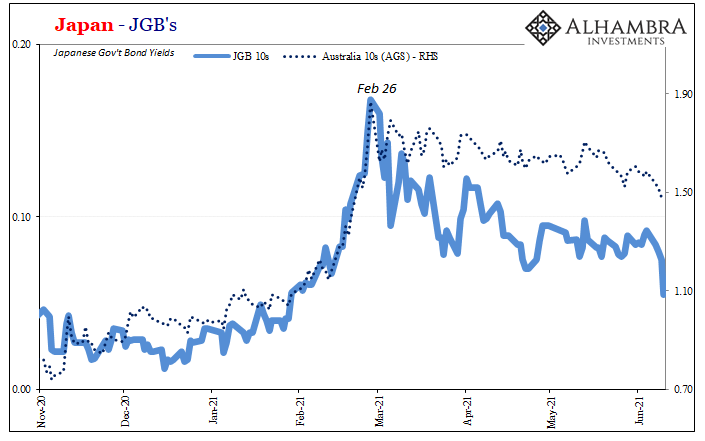 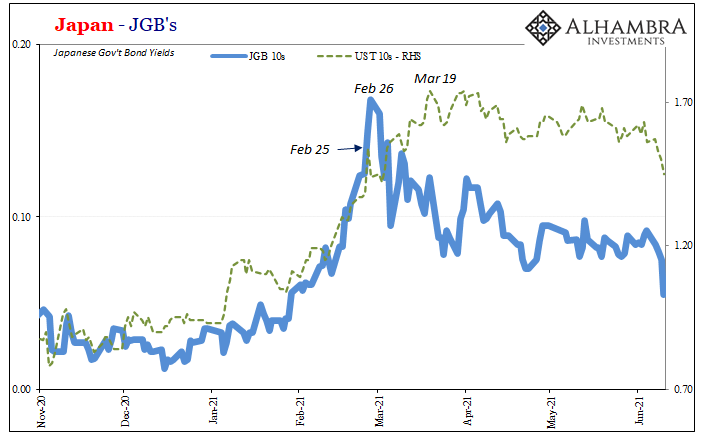 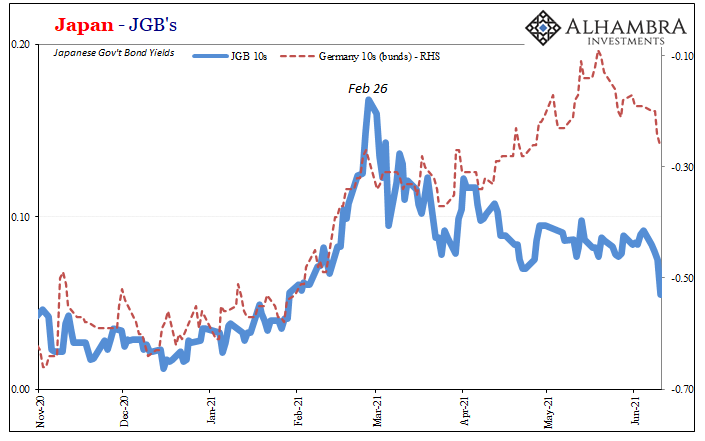 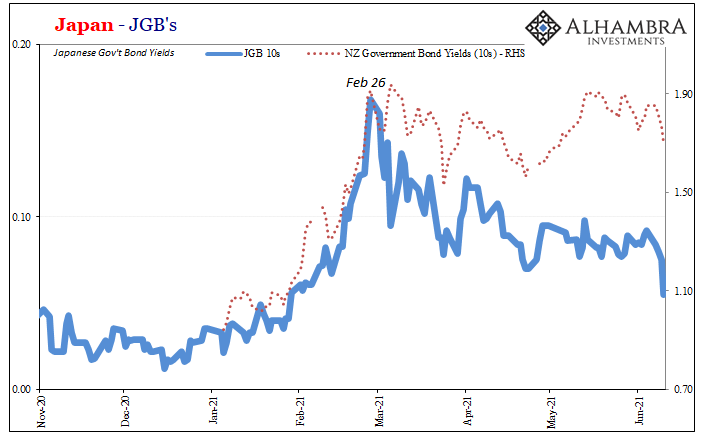 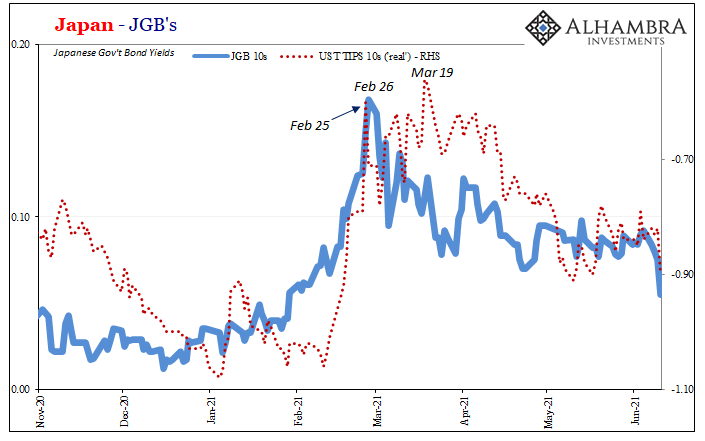 If, say, I don’t know, China’s economy really is rolling over hard perhaps more quickly and forcefully than has been anticipated, this would account certainly for JGB’s as well as yields Down Under.

Global factors certainly matter because inflation is a dollar therefore global consequence. For these reasons, collateral as well as others, the market is looking ahead not as if the existing money and growth regime has been flipped upside down as all recent inflation data might propose, rather falling yields in spite of all these various CPI’s and PPI’s are concluding with greater certainty how nothing much has really changed.

As does, in a way, the Fed’s RRP and what that “central bank” is doing elsewhere to further harm the system. At least Secretary Yellen has a semi-legit excuse. I mean, just take a look at real yields if nothing else. 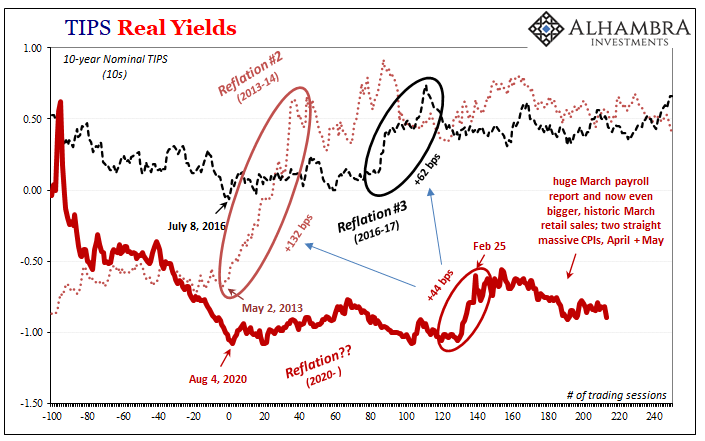