Yields, Not Dots; Another Example of Why Inflation Had(s) No Chance

Yields, Not Dots; Another Example of Why Inflation Had(s) No Chance

The FOMC held a meeting and that can only mean dots. These are the individual policymaker’s views on where the federal funds target range might end up down the road. The latest update for the June 2021 central bank conclave shows several more voting members projecting the first rate hikes to begin toward the end of next year, a supposedly very hawkish shift from the last time.

While that may be true, it also doesn’t mean anything especially as it changes nothing about the latest inflation figures in the CPI or PCE Deflator. What these dots are “saying” is that the FOMC still views “inflation” as “transitory” (meaning it’s not inflation) but that the upside path for the longer run US economy has become a little brighter, a lot less COVID-y.

The problem insofar as the dots are concerned is largely who blots them on each meeting chart. Many, really most of the voting FOMC members are the emptiest sort of suits who can rattle off talking points about QE and whatnot only by rote recitation. They have no idea what the RRP does, for example, or what’s truly going on, but their staffs make lots of pretty charts for them drawn from sophisticated statistical models.

This just hides an even bigger problem. These models all view interest rates as the plaything of the FOMC rather than a check upon the oftentimes unrealistic assumptions or just plain mistakes input into them. Bond yields, for example, contain massive amounts of good information within them not available anywhere else (except other corners of the global “bond market”).

Those who actually trade US Treasuries in size are the very participants in the shadow money system itself. How and when yields move, these are hugely important clues about the hidden state of money and economy as each unfolds – the very factors the FOMC is supposed to be monitoring. If yields are behaving differently, then watch yields not dots.

One reason why is…data. Time and again we find out – only years afterward – that not only had the bond market and interest rates been right about the general global economic situation they’d actually been “more” accurate down in the details than had previously been believed. Case in point: 2018’s landmine. 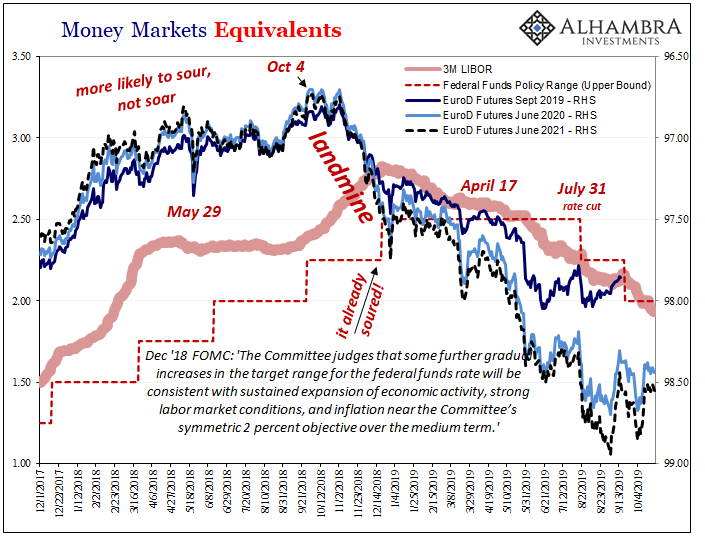 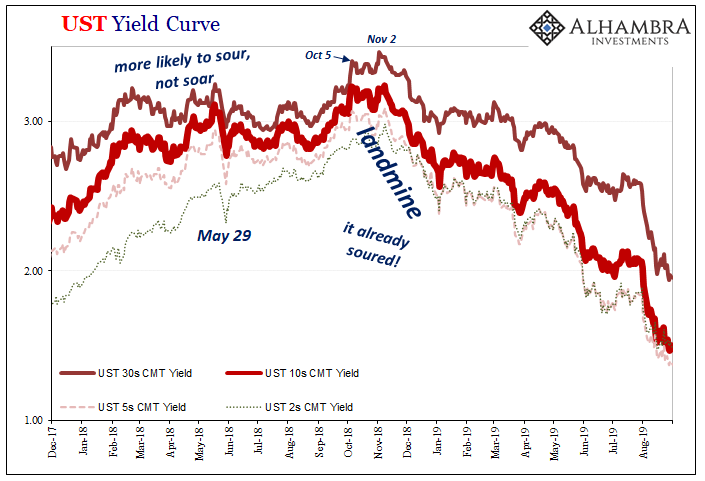 What was this “landmine?” Simple: from October 2018 to the end of that year, all those inside the economy and monetary system who drive UST yields (in the “wrong” direction, mostly), eurodollar futures, and other assorted contracts and assets had suddenly changed their mind about current conditions. Not for the better, mind you, they were trading as if something as bad as recession was already in progress.
To the mainstream at the time, this was seen as preposterous.

Jay Powell’s FOMC continued to hike rates all the way to their last meeting of the year, in December. While the bond market was being hugely bid, eurodollar futures inversion moving way up the calendar spreads (another big warning), Powell and the Committee’s dots were unmoved; 2019 was, by their models, still going to be awesome if only because 2018 was thought to be that way, too.

The landmine was a warning, a big one, this was all wrong and getter wrong-er by the day.

It is therefore an opportunity as well as a warning. It would be, anyway, if authorities weren’t always too busy being behind. Policymakers are so self-assured there is no warning that can wake them from their self-imposed illiteracy. Self-assessment in public doesn’t allow for the consideration of small failure in policy let alone the repeated big ones.

We know how 2019 unfolded; falling yields were absolutely right about the FOMC’s eventually 180-degree U-turn into rate cuts not hikes (so much for the dots). But what about 2018?

Turns out that bonds had nailed that one, too. But we’ve had to wait several years for more complete confirmation.

The Federal Reserve itself keeps tab on US Industrial Production. Like any other economic account, the central bank’s staffers and Economists don’t go out and knock on every factory, mine, or utility plant door and ask about production levels in each one. Rather, they sample a small number monthly and then compile an index employing a few statistical “tricks” along the way.

Trend-cycle, most of all.

The IP series, like any other, is supposed to be benchmarked to more comprehensive annual surveys each year, its index adjusted according to it. Larger sample size, more accuracy. COVID had forced the Fed to skip the 2020 benchmark, and for reasons I haven’t seen publicized (it doesn’t really matter) the 2021 benchmark wasn’t released until yesterday (rather than April). 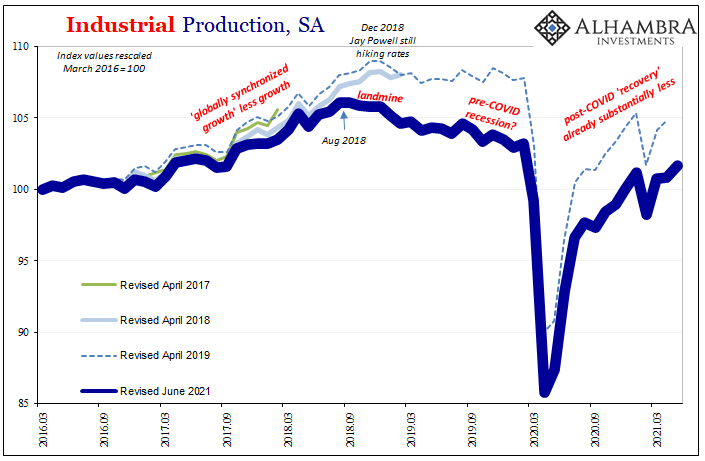 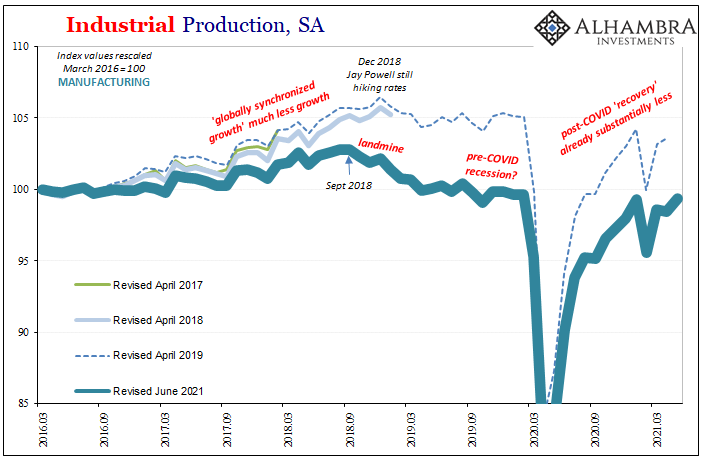 Guess what? Yep, bonds had it all right about late 2018, too. Not just 2019, the landmine really had been a real-time warning how US industry by September and October 2018 had already been contracting. The new benchmarks show how a bedrock component of the US economy had indeed turned recessionary as far back as those months all the while ignoring bond behavior anyone else thought it was a boom.

That’s not all; the benchmark IP revisions, as you can plainly see above, also show how bonds had been completely accurate about 2017’s “globally synchronized growth” nonsense. This was supposed to have been a meaningful acceleration in the global economy, US industry at the forefront, yet today only years later does the Fed’s IP series display how it really had been overhyped nothing.

Bond Kings and inflation hysteria, while yields had their finger on the actual pulse of the real economy the whole time.

Bond yields – though rising – because the curve had been flattening out what this had indicated was the same inside money and economy participants totally disagreeing with the bumper sticker slogan. Flattening curves were a huge red flag that while there may have been a high degree of synchronization, it just wasn’t synchronized in actual growth.

There was also one final unwelcome surprise in the IP benchmark changes: the post-2020 “recovery.” As we’ve endeavored to point out each and every month, using the data we have available, US (and the rest of the global economy’s) producers haven’t once bought the idea of inflation or even sustained recovery. Curiously, though not really, production volumes across the sector have remained hugely suppressed; said so again just yesterday.

Bond yields have, even accounting for January-March reflation, indicated there’s been too much missing from it to ever realistically become an overheated inflationary cycle. Where are the producers? Weakness rather than robustness is the stubborn view from low interest rates, invoking 2017-18’s eerily same setup media (and dots) versus the entire bond market.

As much of a seeming contradiction as all that has been, the Federal Reserve’s benchmark revisions indicate that, yes, bonds have been right yet again. Not only was the recession substantially deeper in industry, the rebound from it noticeably less still just as low yields have asserted from the very beginning.

And that’s my maddening, frustrating pet peeve with all this; you were misled in 2017 with regard to inflation potential (bonds: sour, not soar) by overstated data at least not directly refuting the inflation hysteria even though it now does. This meant the public, like policymakers, had been cluelessly unprepared for how the situation progressed into the end of 2018 and then everything afterward in 2019.

Inflation never had a chance, not in reality – which should’ve been the default mainstream view had policymakers and the media which uncritically parrots them taken account of yields, and then a less subjective trend-cycle construction which would have better confirmed as much.

But it has taken almost three years for this to come out, and not just Industrial Production. Today, no one cares about historical data revisions to US industry back in 2017 and 2018.

Here’s the thing with June 2021’s FOMC dots: given that this history of revision to more closely align with contemporary bond market opposition keeps repeating (see:2014-15), would we really be surprised if, several years from now, maybe in the benchmark revision for 2024, the Federal Reserve comes out with estimates that indicate the current economic shape – the one which has just moved a few more dots – was likewise overstated more than it already was before these benchmark revisions?

As bad as it is already, there’s a pretty solid chance we find out it’s probably not even this good; or, why Treasury and global yields are stuck at otherwise insanely low levels despite “everything” seemingly going right. Yields are information about what’s really going on as it is going on. Dots are theater.