Anyone Remember That Whole SLR Cliff?

Anyone Remember That Whole SLR Cliff?

Does anyone remember the SLR “cliff?” Of course you don’t, because in the end it didn’t seem to make any difference. For a few weeks, it was kind of ubiquitous if only in the sense that it was another one of those deep plumbing issues no one seems able to understand (forcing all the “experts” to run to Investopedia in order write something up about it). Whatever this thing was and was going to be, it sounded ridiculously earth-shattering.

And then, poof, it was gone.

Banks had made a major deal out of it because, well, they don’t like it. Thus, while the world’s attention was fixed in this area, why not try to beat it back by hyping its negative potential? It was absolutely true that the SLR in this case was going to make holding safe and liquid instruments more balance sheet “expensive.”

In the wake of the last GFC, in March 2020, the federal government had issued trillions in new debt while at the same time the Federal Reserve created trillions in new bank reserves. Both are asset classes which come under the latest Basel tricks intended to capture more of bank balance sheet behavior than the simple capital ratios which had proved worthless during GFC1.

Not wanting to upset government funding markets nor the Fed’s QE purchase pace, authorities issued a one-year reprieve for both UST’s and bank reserves – these wouldn’t be calculated for SLR purposes. The single yearly amnesty was set to expire on April 1, thus the SLR “cliff” was in the regulation being re-applied without exception.

And there had been some noticeable dealer selling in Treasuries – though it wasn’t absolutely clear the cliff was the reason for this. It may have simply been reflationary disinclination; rates were rising at the time as inflation and growth prospects seemed to have been picking up. Either way, BOND ROUT!!!!!

This whole SLF cliff business, however, was misunderstood for any number of reasons but mostly pertaining to balance sheet implications. The very fact banks were using this as an excuse was meaningful in what it said about their perceptions of the situation more generally; as well as Jay Powell’s lack of response to it.

Many came to believe that the Fed would end up surrendering, giving in to banks at the last minute after making some symbolic stand. I didn’t think so, and for reasons that looked a lot like experience with negative interest rates.

What is the SLR coming back for UST’s and bank reserves alike like? In this specific case, higher costs being deliberately imposed on the safest, most liquid parts of US banks’ balance sheets given what they’ve done over the past year. Understanding this, might Jay Powell be saying the same thing as he would imposing NIRP: you don’t like higher (balance sheet) costs on low-paying highly liquid and safe instruments, too bad, go out and find better returns by raising your loan book!

What ended up happening instead? Banks and other financial firms went right back to buying the safety and liquidity of UST’s anyway!

The SLF “cliff” raised the balance sheet costs for holding those plus bank reserves, and to the day I wrote this LT UST yields have been dropping as those higher balance sheet costs have been factored by the financial system anyway and incorporated into higher UST prices – not more and accelerated selling of safety.

The reason NIRP has only failed is that banks don’t chase nominal returns – ever. Balance sheet decisions are made on a risk-adjusted basis, both assets as well as liabilities. In fact, risky liabilities can and have influenced asset decision-making; especially since, oh, around August 2007.

If Jay really is trying to use the SLR cliff as a macroprudential cattle prod, of sorts, and I do believe he is, the Chairman at least begins with a good reason. Lending since the first GFC has been a huge drag, and one that has actually been amplified (no surprise) in the wake of Powell’s awful performance during GFC2.

Quite simply, it doesn’t matter that holding UST’s (and bank reserves) is now more costly, the perceived risks of holding anything else must be higher. And getting worse all the time.

Everything is supposed to be going right, and the US economy, in particular, leading the world to mend. Except, in US bond markets only beginning with Treasury investors – a class who includes these banks bearing SLR surcharges – there’s only deep and profound skepticism being consistently priced into these very instruments.

Have you seen real yields? 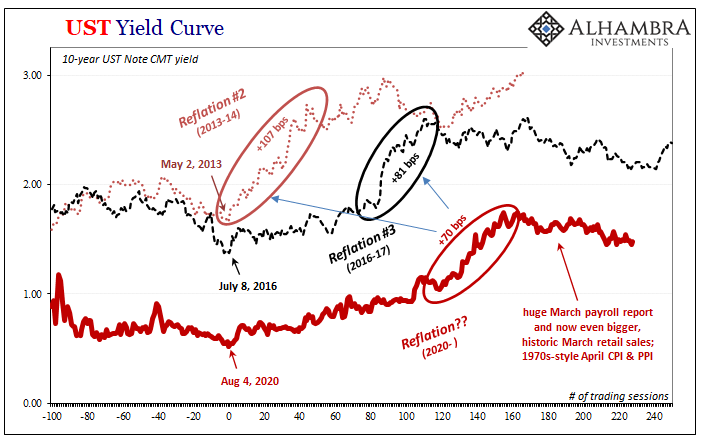 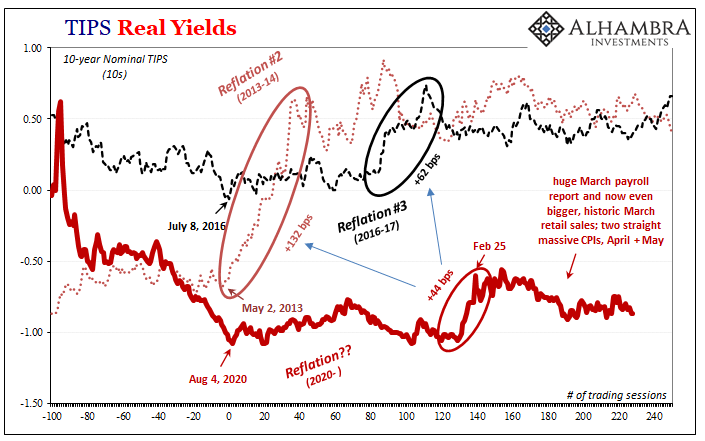 In other words, the SLR cliff was only important in yet again demonstrating the unwillingness of the banking system to do much other than hold the safe and liquid stuff no matter what authorities say or do. Jay Powell wanted a higher regulatory burden hoping, if for plain emotional reasons, this would propel riskier activities.

It didn’t. Instead, banks have eagerly paid the higher balance sheet costs anyway. And that remains a huge red flag going forward.

It would’ve been something without this SLR business; but to see yields fall, UST prices rise, even with now higher associated balance sheet costs? There’s more going wrong than right by a wide margin. And this includes, obviously, all the inflationary CPI’s and PCE Deflators. 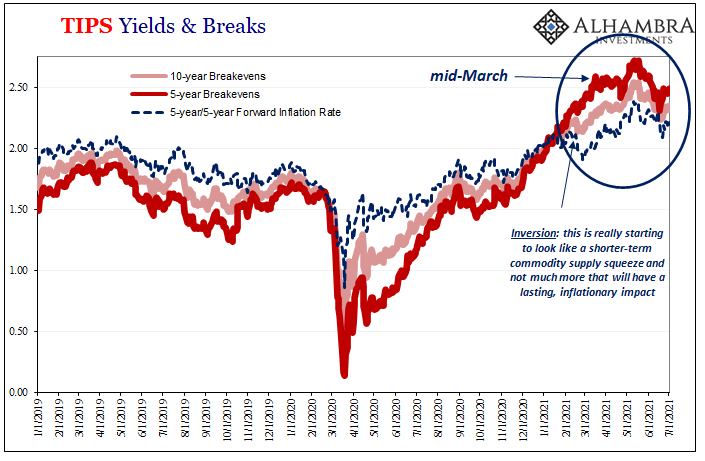