No Inflation In These Payrolls

No Inflation In These Payrolls

Payrolls for the month of June were a mixed bag, in that the payroll data was better than expected at the same time nothing else was. After a couple months of ho-hum gains for the Establishment Survey, government hiring (mostly) boosted the latest monthly figure to +853,000. This brings the 6-month average up to +543,000, which is either really good and pointing to a reopening economy or not nearly enough because it doesn’t point to anything more than a reopening economy.

Right away, however, the CES figures contrast with the Household Survey which actually declined by 18,000 (which is why the unemployment rate ticked higher). While that’s not terribly unusual, the CPS figures are far more volatile on a monthly basis, it leaves the 6-month average for the HH at now less than 300,000 which equals only a slightly better than average stretch for the pre-COVID labor market.

Those aren’t even close to the level of sustained gains anyone should associate with a robust recovery from a huge contraction.

We don’t expect CES and CPS to match – they measure two different things – but given that this is supposed to be a full-blown boom with all the major obstacles finally and most completely removed it’s enough of a discrepancy to interject uncertainty about the underlying strength of the rebound outside of simple reopening. The latter is a necessary but by itself insufficient condition.

Not that there is anything wrong with jobs coming back; we still need millions of those. However, that was never going to be near enough on its own. For one thing, the passage of time, a lot of time, means the economy still has to cover last year’s losses plus more than a year of even minimal gains that didn’t happen (and still haven’t yet).

Perhaps even more concerning still, despite the clear boost in retail sales and goods spending due to Uncle Sam along the way, there’s barely any change in the employment trends dating back to last summer’s slowdown. 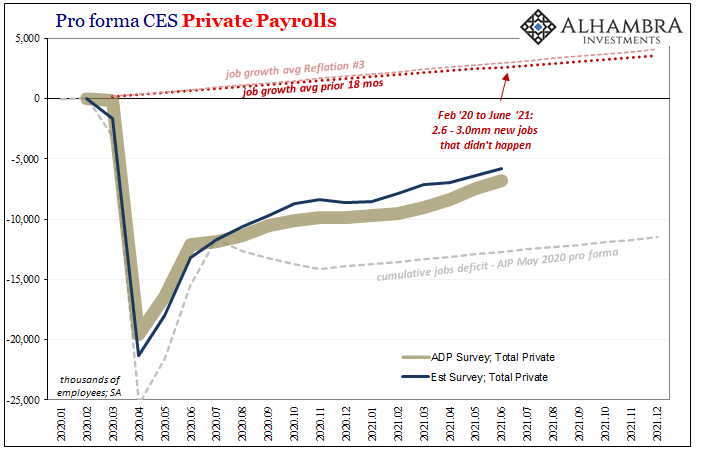 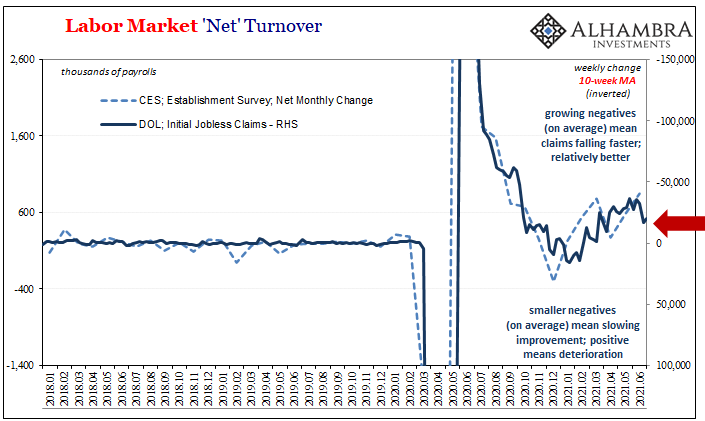 According to the CES figures, because of that the gap might be down to a 5.7 million shortfall (private payrolls) to last February’s peak, there’s now 2.6 to 3.0 million jobs which needed to have been created that weren’t. Thus, while private payrolls increased 662,000 in June, it’s nowhere near enough to quickly close the huge gap.

This doesn’t account for the small monthly decline for the CPS Household Survey, mostly statistical noise, but it sure does explain at least in good part why the Labor Force (which comes from the CPS data) still hasn’t budged.

The participation rate was, yet again, just 61.6% or pretty much stuck in this close range since August of last year. For eleven months, almost an entire year now, the millions who left the labor force after the huge contraction in jobs haven’t yet been incentivized to come back into it. Even as some of these monthly headline payrolls suggest a roaring labor market recovery, the labor force remains stubbornly something else. 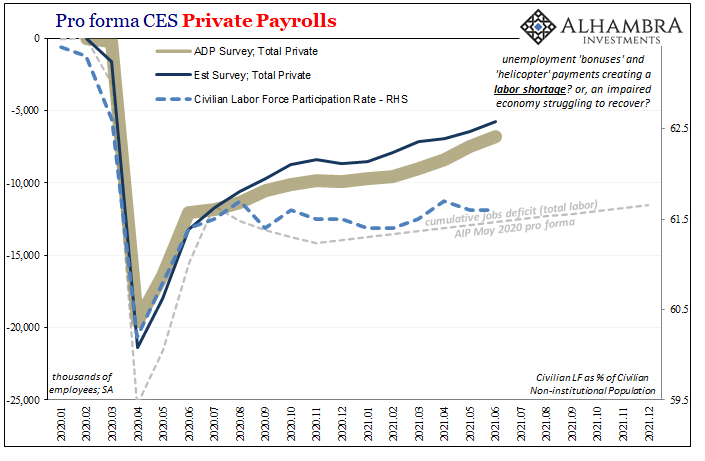 The question is, why?

Too-generous unemployment benefits, fears of coronavirus spread via office or facility disease, the lack of fully opened-up schools, etc. There have been proposed a number of possible non-economic factors which then leave the labor market recovery and the entire economy stuck in a lesser state because of what would amount to a labor shortage.

You hear about this labor shortage everywhere. For those looking at inflation this would be a key contributor keeping consumer price acceleration high beyond the other “transitory” factors already wearing off elsewhere. Businesses claim to want tens even hundreds of thousands more workers than they’ve been able to bring onboard, and the media writes about this on a better than daily basis as if established fact.

And while there are definitely pockets of hard-to-get workers, it also might be true employers aren’t actually willing or more likely able to pay the market-clearing wage. If the labor shortage is a “real” shortage, then we’d expect fierce competition for workers to drive up the marginal costs for them – but this isn’t showing up at least not in any straightforward way in the wage data. 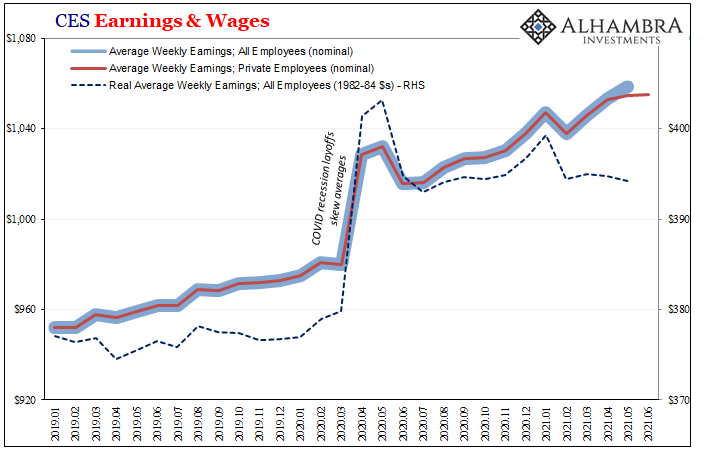 Because of the way the COVID recession hit the lowest wage earners the hardest, in terms of wage and earnings the estimates were skewed upward as those in the lower levels were primarily the target for layoffs. We would expect, therefore, that as those workers come back the wage estimates would normalize and skew somewhat slower and downward (in real terms).

But if competition for labor is as extreme as has been claimed, wages and earnings would be rising faster than the downward pull of normalization and we’d see wildly inflationary earnings regardless. If it was an extreme factor, it’d be unambiguous despite the statistical difficulties.

In fact, the BLS data shows that nominal wages and earnings have decelerated noticeably over the past two months (including the month of June for private workers), really the past four or five. Going back to January, nominal average weekly earnings have increased a total of 0.7% even as the labor shortage anecdotes have only intensified and proliferated.

This has meant in real terms wages and earnings are declining. The BLS won’t have the June estimates for real earnings until the next CPI numbers become available, but through the month of May 2021 real average weekly earnings were down 1.3% compared to January, and down 2.2% versus last May. The average number of hours increased slightly, so the entire decline was due to lower average real wages.

Again, the data is skewed so this doesn’t necessarily mean actual wage rates and weekly earnings are dropping, it simply means the average is falling likely because low wage earners are coming back into the reopened economy. But this normalization isn’t being offset and overcome by the massive labor shortage, either, likely because there is no massive (or even a mild) labor shortage. 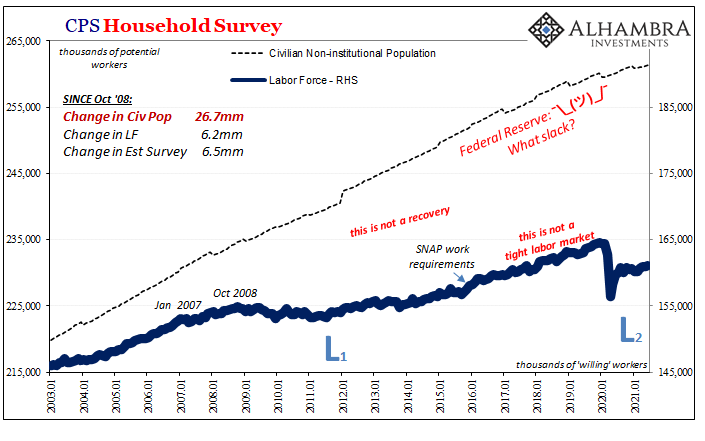 Wages aren’t rising anywhere close to fast enough to offset the statistical skew because companies aren’t willing or aren’t able to pay rapidly rising labor costs, and the labor market knows the difference which is almost certainly why the labor force itself continues to be stuck at last August’s level even as more and more labor opportunities have been revived.

As we’ve said from the very beginning last year, though, that’s not nearly enough. While there are absolutely non-economic reasons keeping Americans from rejoining the economy, there are plenty of indicated economic problems, too, which is very likely the reason why there isn’t much more than reopening in the broader labor data. No one wants to talk about the economic deficiencies, preferring instead to make a political battle out of these lesser important issues.

You add all that to what’s (really) going on in China, among other places to start, and suddenly the direction of the bond market makes a lot of good sense. It’s not QE holding rates down (it is, in fact, never QE holding rates down), rather there is a growing certitude at least balance of probabilities that after the huge CPI’s and PPI’s all die down like the stagnation in the labor market the rest of the economy (particularly outside the US) won’t end up so much as even mildly inflationary.

You don’t need to take my word for it; this labor shortage like overall inflation remains the clear outlier case, the disinflationary baseline of the pre-COVID era still (sadly) going strong if not worse than that. Even after another big headline payroll gain, just look at real yields! 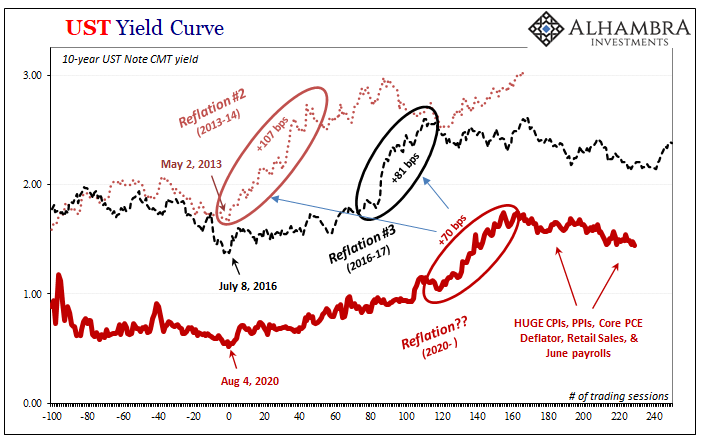 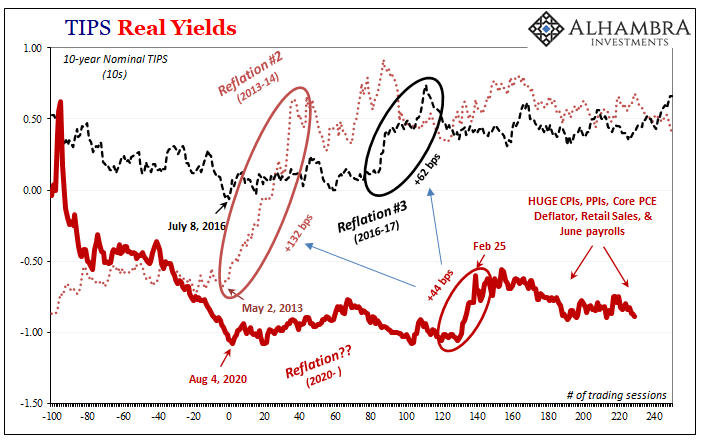 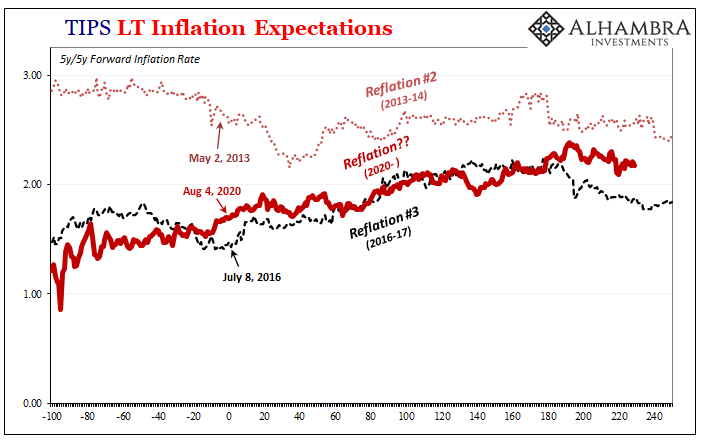