Bond Reversal In Japan, But Pay Attention To It In Germany

Bond Reversal In Japan, But Pay Attention To It In Germany

Yield curve control, remember that one? For a little while earlier this year, the modestly reflationary selloff in bonds around the world was prematurely oversold as some historically significant beginning to a massive, conclusive regime change. Inflation had finally been achieved across multiple geographies, it was widely repeated, and this would create problems, purportedly, as these various places would have to grapple with higher interest rates.

The idea behind YCC is simple enough: according to conventional theory, rising interest costs are a hindrance to recoveries and economic growth, choking off inflation before it gets to become beneficial enough. According to the theory.

Therefore, a central bank which declares and then buys bonds as rates are going up can, using this model, limit just how much rates go up, ensuring the increase in them won’t spoil the good times before they get really going.

Of all places, it had been Japan which seemed – in media imagination welded tight to this conventional view – first to trigger actual YCC purchasing (by the Bank of Japan). While initially the Japanese YCC policy which was put in place all the way back in September 2016 “targeted” a yield of zero for the 10-year JGB, the specific dimensions of the policy allowed for some bit of leeway; +/- about 10 bps originally. 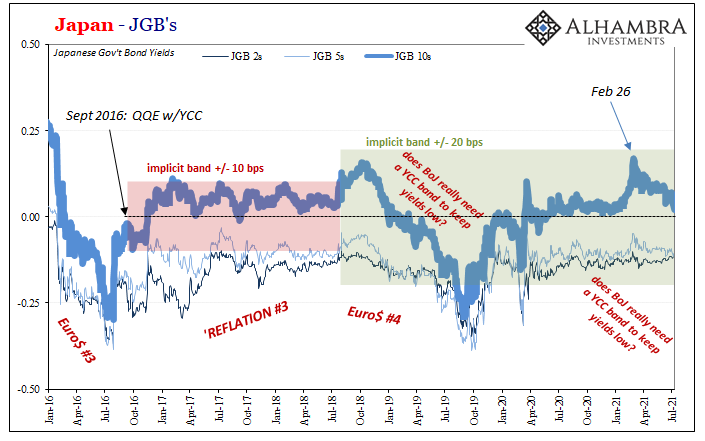 In 2021’s earlier reflation molehill, the JGB 10s got up as a high as 16.8 bps in yield (according to BoJ calculations of the constant maturity rate). Coming so close to that +20 bps range, this, of course, triggered all manner of chattering expectations for looming YCC usage given the inflationary hysteria globally.

That was up to February 26. Since then, JGB yields have retreated well away from 20 bps and are today only a couple bips above zero again with rates more seriously dropping over the past week. YCC success?

No. The idea is hardly mentioned, nor is it ever said why things must’ve changed and did so when they did.

Global bonds – having nothing to do with any one single central bank or its multi-lettered policy names – have been more forthrightly bid, including importantly UST yields sinking equally as fast as JGB’s lately. US CPI’s and economic data for the goods economy have been quickly set aside in favor of now falling inflation expectations (TIPS) and most alarmingly real yields.

Not just Treasuries, though. 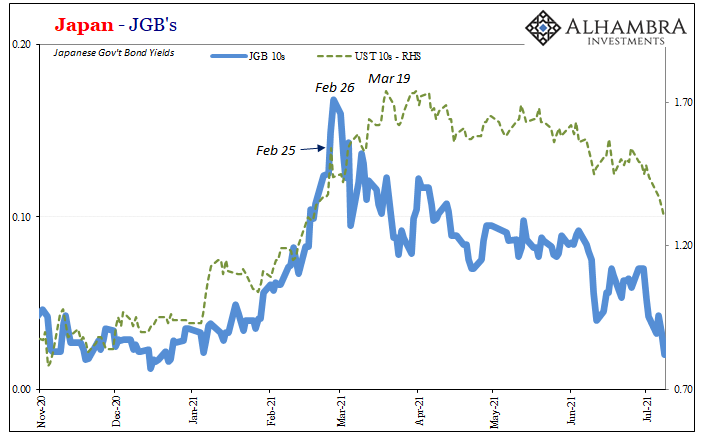 Perhaps even more remarkable than that turnaround in JGB’s or what’s happening in UST’s has been the same in Germany’s bund market. LT German yields had experienced a revelation of reflation truly idiosyncratic for once (at least for Europe as a whole). In part due to the European lockdowns being removed much later than certainly in America, the reopening ascent over on that side of the Atlantic reached into reflationary bonds much later than in all these other places.

But even with especially German conditions still more normalizing than not, bund yields have sunk, too, particularly the past couple of days (big drops today and yesterday) pushing Germany rates down to their lowest in several months. 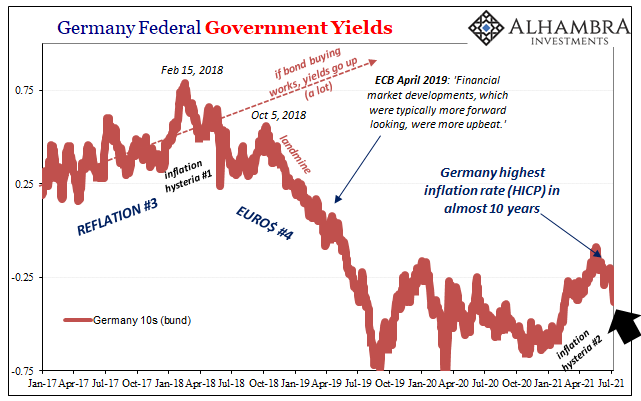 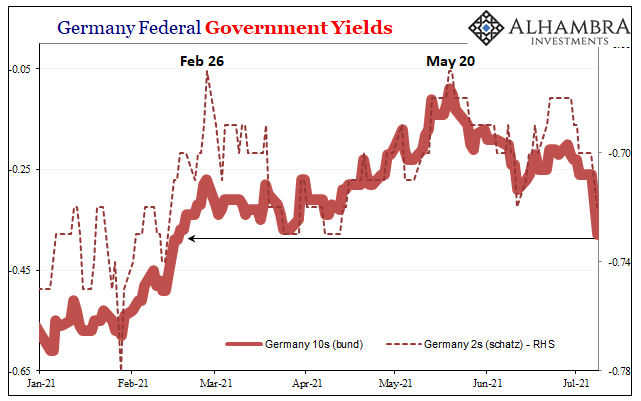 This sudden synchronization is likely tied to some startling information released by German authorities this week. Yesterday, deStatis reported that Industrial Production in the country unexpectedly declined by 0.3% in May 2021 compared to April. The economy, particularly industry, is supposed to be further ramping higher as the later reopening frenzy reaches deeper into Europe (in a good way).

The day prior, though, deStatis released statistics on German Factory Orders which contained another one of those unwelcome surprises (not really) going around of late in global data. According to its calculations, factory orders tanked by 3.7% just in May (from the month before). This was the worst drop since last year’s full recession, and one of the worst in many years even as orders were anticipated (by “analysts”) to rise something like 1.5%.

Not just a huge miss, but the huge outright decline. 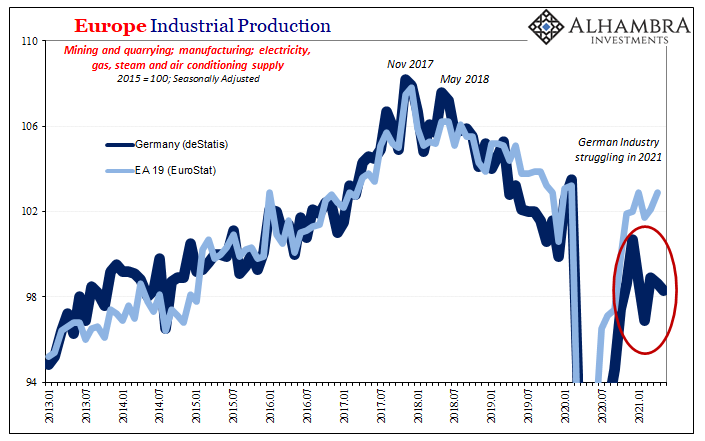 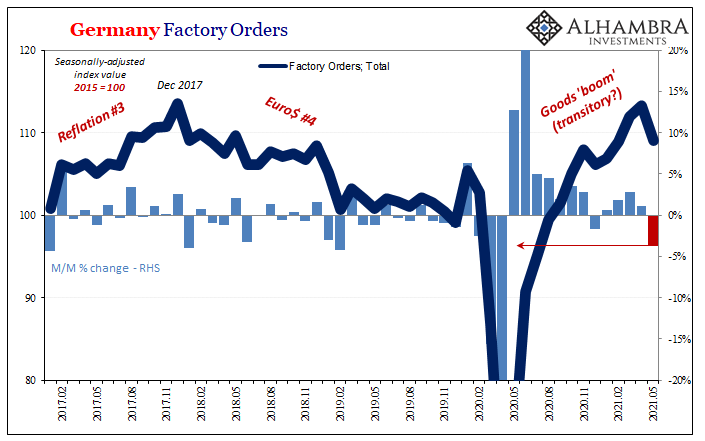 The reason for it? Not Germany’s economy which, by these numbers, continues to move along relatively well. Instead, it was demand from abroad which receded by so much: factory orders from other countries in the Eurozone were down 1.3% month-over-month in May, while, shockingly, orders from outside the Eurozone collapsed by 9.2%.

That’s neither a misprint nor an annual rate. A monthly decline of that magnitude in demand from outside Europe will get everyone’s attention even as foreign demand had been high beforehand.

Germany’s factory orders had been increasing consistent with the “boom” in overall trade and goods; the world, particularly the US, was buying up whatever Germany could make as fast as it could be made. 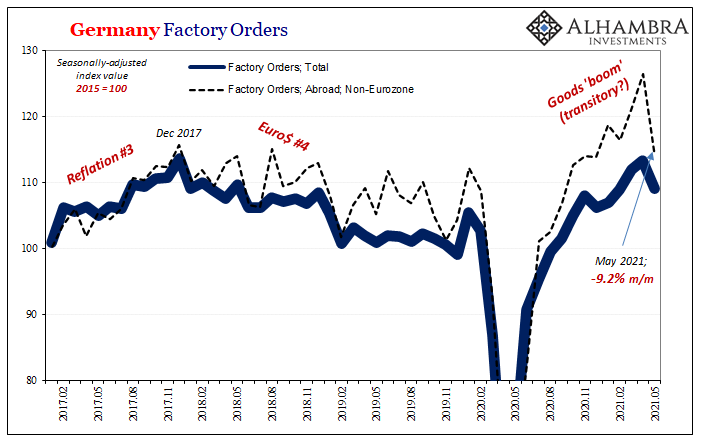 The inflation narrative declares definitively this would continue for quite a long time more since government “stimulus” is assumed to effectively stimulate, if not, in this view, do too much. The underlying and persisting baseline deflationary interpretation instead saw it as only ever temporary. The drop in Germany factory orders, like German IP and the struggle beyond manufacturing goods, is yet another indication (one after another, of late) more in line with the latter than the former.

What if we’ve seen this “recovery’s” best days, and they really weren’t all that good (particularly in comparison with last year’s even bigger contraction)?

This is the global factor once more driving bond yields, from JGB’s to UST’s and now again German bunds. There are growing very realistic fears that this is it, and wouldn’t be near enough. Forget inflation, there’s barely reflation in what’s happened thus far. And if it is indeed rolling itself over, as sinking bond yields everywhere more confidently declare, then what?

Not yield curve control, that much you can take to the (increasingly risk-averse) bank.