Weekly Market Pulse: Is It Time To Panic Yet?

Weekly Market Pulse: Is It Time To Panic Yet?

Until last week you hadn’t heard much about the bond market rally. I told you we were probably near a rally way back in early April when the 10-year was yielding around 1.7%. And I told you in mid-April that the 10-year yield could fall all the way back to the 1.2 to 1.3% range. The bond rally since April has been of the stealth variety, the financial press and market strategists dismissing every tick down in rates as nothing. It was a lonely trade to put on and yes, I think it was a trade, not the beginning of a bigger move. Heck, I expected a rally and still had a hard time benefitting from it. I did extend the duration of our bond portfolio in the spring but I didn’t go out and load up on the really long maturities that did the best as rates fell. Part of the reason for that is our clientele, which skews significantly conservative. There is almost no circumstance where I would buy 20+ year bonds for most of our clients. But we have some aggressive clients too and I didn’t buy long maturities for them either. If I’m honest with myself – and you, dear reader – I must admit that I didn’t think we’d see a sufficient economic slowdown to justify a big move in bonds. What I have believed and written about consistently is that I did not and do not expect an economic boom as the virus ends. And I think I’ve gotten that one pretty well right, at least so far. And frankly, the pull back in economic data hasn’t been all that significant either, but expectations about growth have changed and an overshoot, this time to the downside in yields, shouldn’t be surprising.

The question, of course, is what happens from here. To answer the question that is the title of this post, no, it isn’t time to panic yet.  We need to put this move in context and think about where we are in this business cycle.  Let me get this out of the way right up front; on the verge of recession is the wrong answer. Bond yields had merely gone too far, too fast and a correction of that overshoot was both necessary and entirely expected. The post-virus boom narrative had become too consensus, too easy, and priced into bonds as if it were a fait accompli. Bonds have spent the last few months adjusting to new expectations regarding growth. I think that process is largely over now but we’ll have to wait for more economic – and maybe virus – data to confirm that. In the meantime, if you missed this recent bond rally I’d be very careful about diving in now. 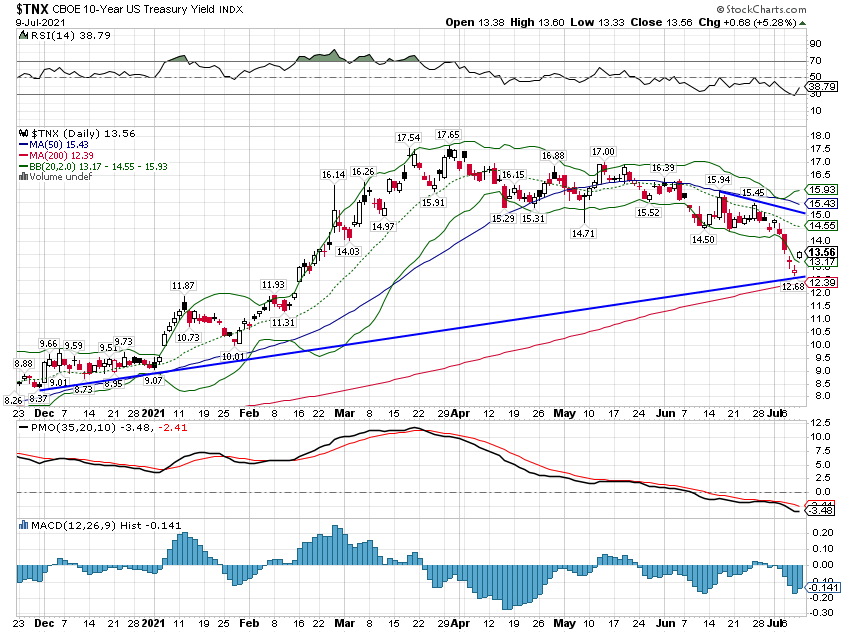 In context, the recent 40 basis point drop in the 10-year yield isn’t significant. A look at history confirms that we see this kind of move all the time and most of the time it means nothing. I’m not saying this recent move means nothing too – we don’t know that yet – but by itself the drop in yields means nothing. You need confirmation from other indicators to start worrying about a significant growth slowdown. Right now, I don’t see anything like that. 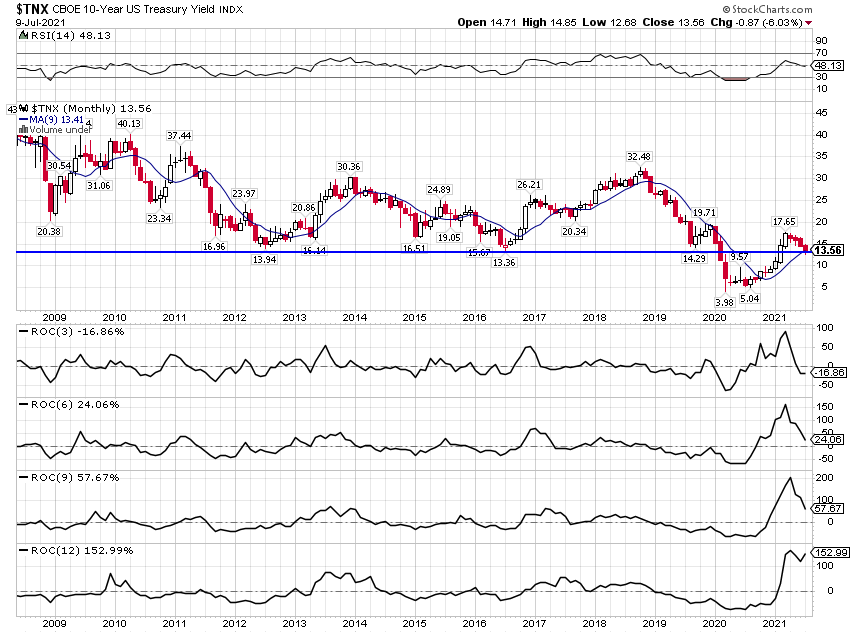 The yield curve has flattened somewhat during the bond rally as short-term rates rose (slightly) and long-term rates fell. But we are a long way from flat or inverted and we saw several large flattening moves in the last cycle that did not presage recession:

We would expect credit spreads to widen if the market was anticipating a big growth slowdown. It isn’t happening:

And of course, we would expect stocks to fall if the market was really concerned about growth. While we have seen some corrections in economically sensitive sectors, it looks more like profit-taking to me rather than a sea change in growth expectations. And the major averages haven’t corrected at all. I will say though that valuations are still high and so therefore is risk. If Q2 was the peak rate of post-virus growth – and I think that is what the bond market is telling us – it may also prove to be the peak rate of change for earnings. And that doesn’t even consider how profits might be impacted by any potential changes in economic policy. I don’t think the Biden administration has the votes to raise corporate taxes but there are plenty of changes to policy that can be effected outside of the legislative process – as the Trump administration showed repeatedly. So while I’m not worried about a recession right now, that doesn’t mean I’m not worried about stocks. I’d venture to say that the two biggest risks to stocks right now are negative changes to economic policy and another virus surge.

I still have plenty of worries about the US and global economy too. Real interest rates remain very negative – approaching -1% in the 10-year TIPS – not a condition normally associated with high rates of growth. China’s economy is obviously slowing as evidenced by the cut in reserve requirements for their banks last week. Latin American politics is in the midst of another violent shift to the left. Europe is still, well, Europe. Japan continues to struggle on a macro basis, although the corporate restructuring there continues to pay benefits. Here in the US we have added an enormous debt load to our economy which promises to slow growth from the already sclerotic pace that prevailed prior to COVID. We entered the COVID era growing at about 2.2% per year over the previous decade and if nothing changes my expectation is that, once we get past the recovery phase, we’ll settle in at an even slower pace. After 2008, I expected the next business cycle to be long but slow because of the degree of government intervention. If you think of economic growth like a sine wave, government intervention tends to flatten the curve, reduce the amplitude. But when you do that you also increase the wavelength. The lesson is one that Jeff Snider has been writing about for years. You can limit the depth of the recession with monetary and fiscal policy. But when you do you also limit the subsequent upside. The cycle is longer, but it is the same amount of growth spread out over a longer period of time. There is still no such thing as a free lunch.

I also want to emphasize the phrase “if nothing changes” in the above paragraph. That is the wild card here that no one can predict. We don’t know what positive changes may come from this period although I suspect they may be more considerable than anyone currently expects. The realization that many jobs are not location specific is one I think promises many benefits. It doesn’t mean that NYC is going to become a ghost town – or even affordable for most – but the impact on small and mid-sized cities – particularly in the sunbelt – is already profound. Technology is also having a big impact across a variety of industries. Economic output has recovered fully even if employment hasn’t and a lot of that improvement can be traced directly to the application of technology. Companies had to learn quickly during the virus year and I expect that learned flexibility, the ability to adapt quickly to changes, will have a positive impact on productivity as well. The rapid development of effective vaccines also holds great promise. Hopefully we can use the technology and rapid approval process in other areas. The coda to this virus story has yet to be written.

There was a very short list of data released in the holiday shortened week. The data we did get wasn’t bad but neither was it great. Job openings remained at a high level but the quits rate fell considerably from last month’s surprising rise. It is still at a high level but down nearly 10% month-to-month is a big change in a short period of time. The largest drop in quits came in professional and business services. I don’t have a good explanation for that so if anyone has an idea, please drop me a line. The ISM services index moderated but is still well above the 50 level that indicates growth. However, the employment component dropped to 49.3. The bullish interpretation is that it is due to a lack of qualified applicants and when you look at the comments that accompany the report, that seems very logical. On the other hand, I’m not sure the why matters as much as the what – employment is contracting and that is hard to spin as a positive for the economy as a whole.

The important reports this week will be the inflation reports and retail sales. The inflation reports seem unlikely to move the markets but the retail sales report very well may. Expectations are for another month-over-month fall. If we get it that will be 5 of the last 8 months in the negative column. Still, a small drop will still keep sales well above the previous trend. 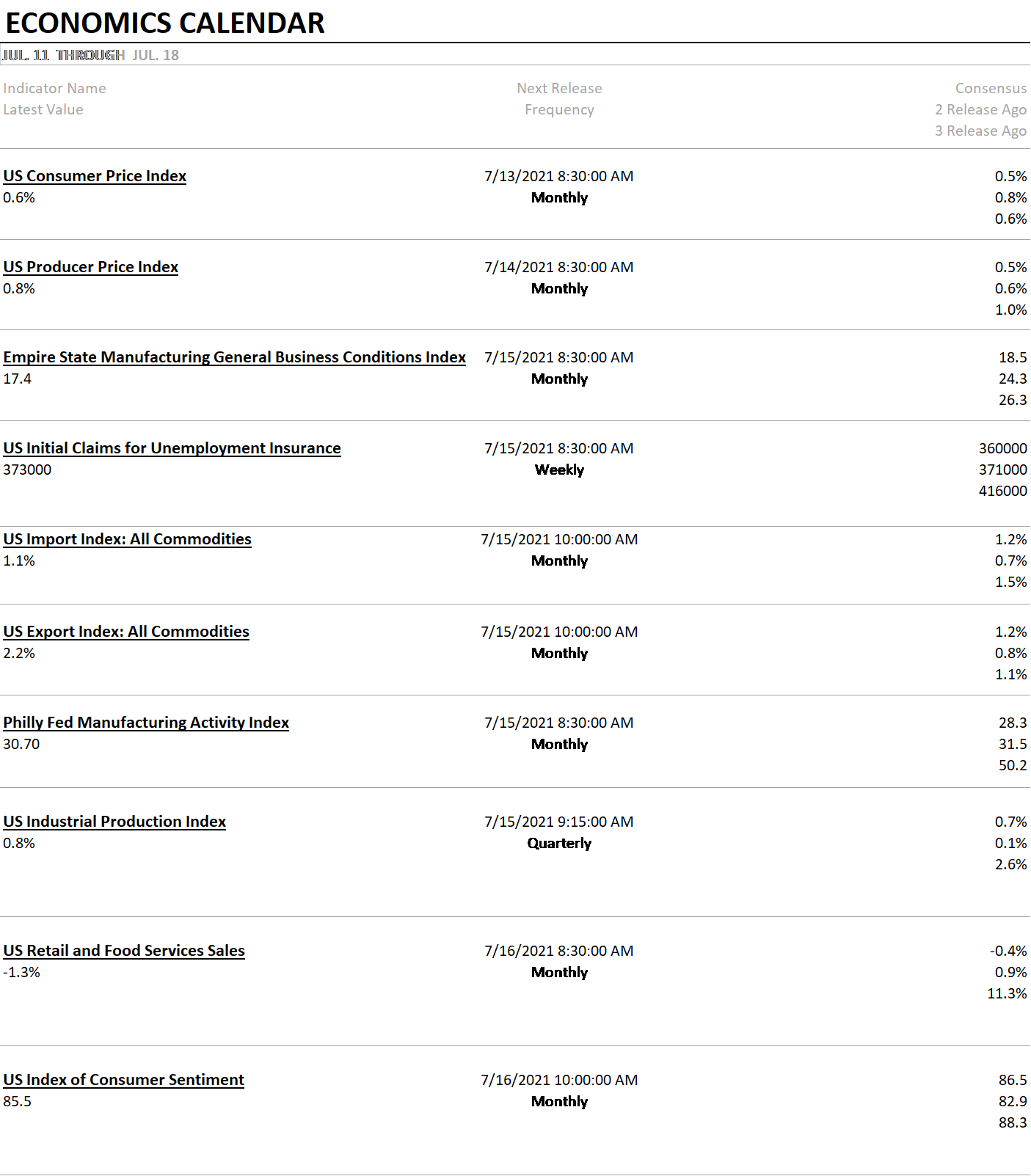 It is a curious slowdown scare that sees real estate rally 3%. Yes, real estate is rate sensitive but it is also economically sensitive. If the market was really worried about growth, real estate would not be doing this well. The shift back toward growth stocks – a mild reaction to slowing growth expectations – continued last week but value still holds the lead YTD. If rates resume their rise and the yield curve steepens from here, I’d expect value to start doing better relative to growth. We have not changed our portfolios and remain overweight value. Commodities also corrected last week but gold had a good week up about 1.5%. 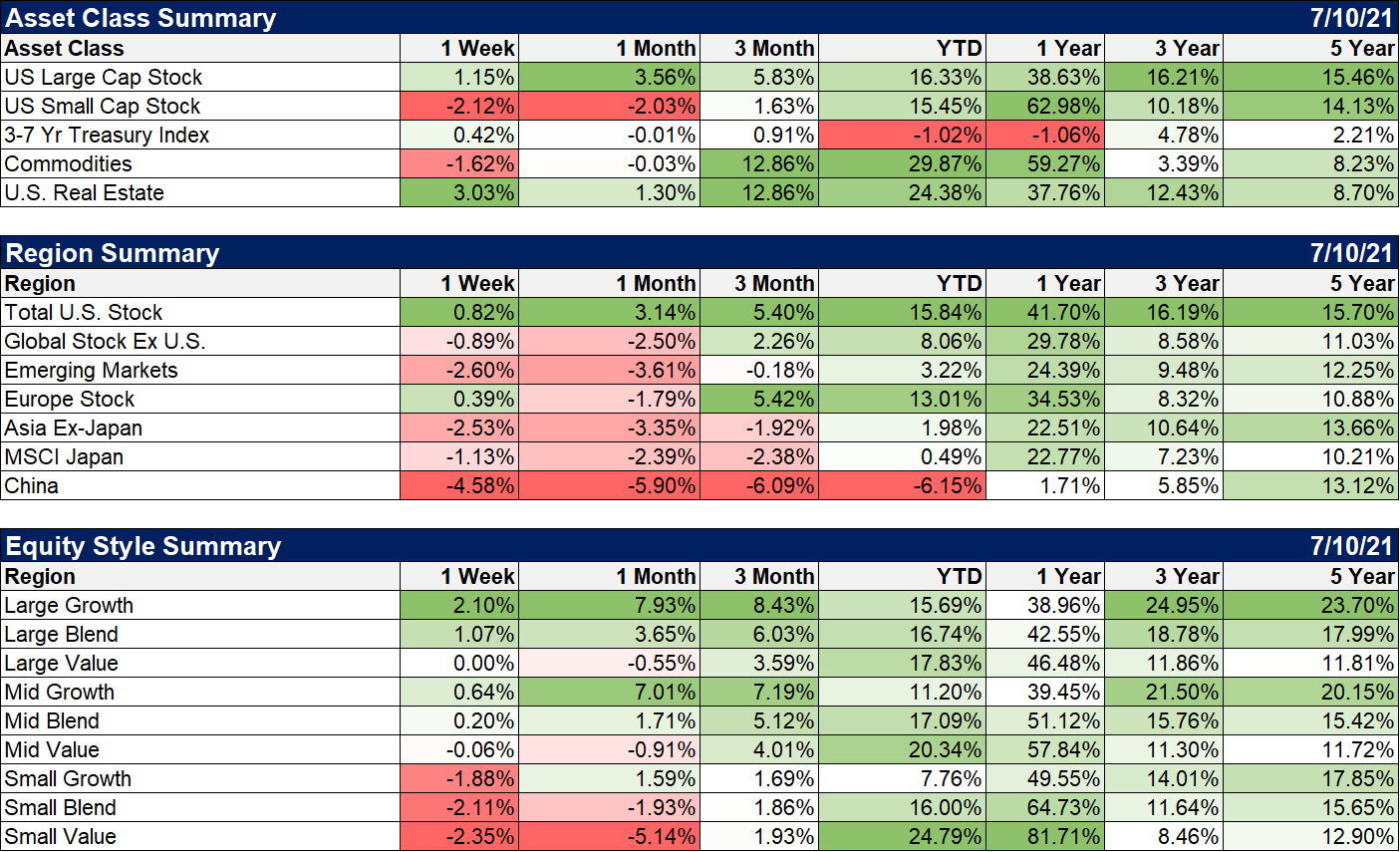 It is kind of hard to find the slowdown narrative in the sector performance from last week. In addition to real estate, cyclical stocks had a good week. On the other hand, health care and utilities, two defensive sectors, performed well too. Stock investors appear to be one of the few groups of people not obsessing about bond yields last week. 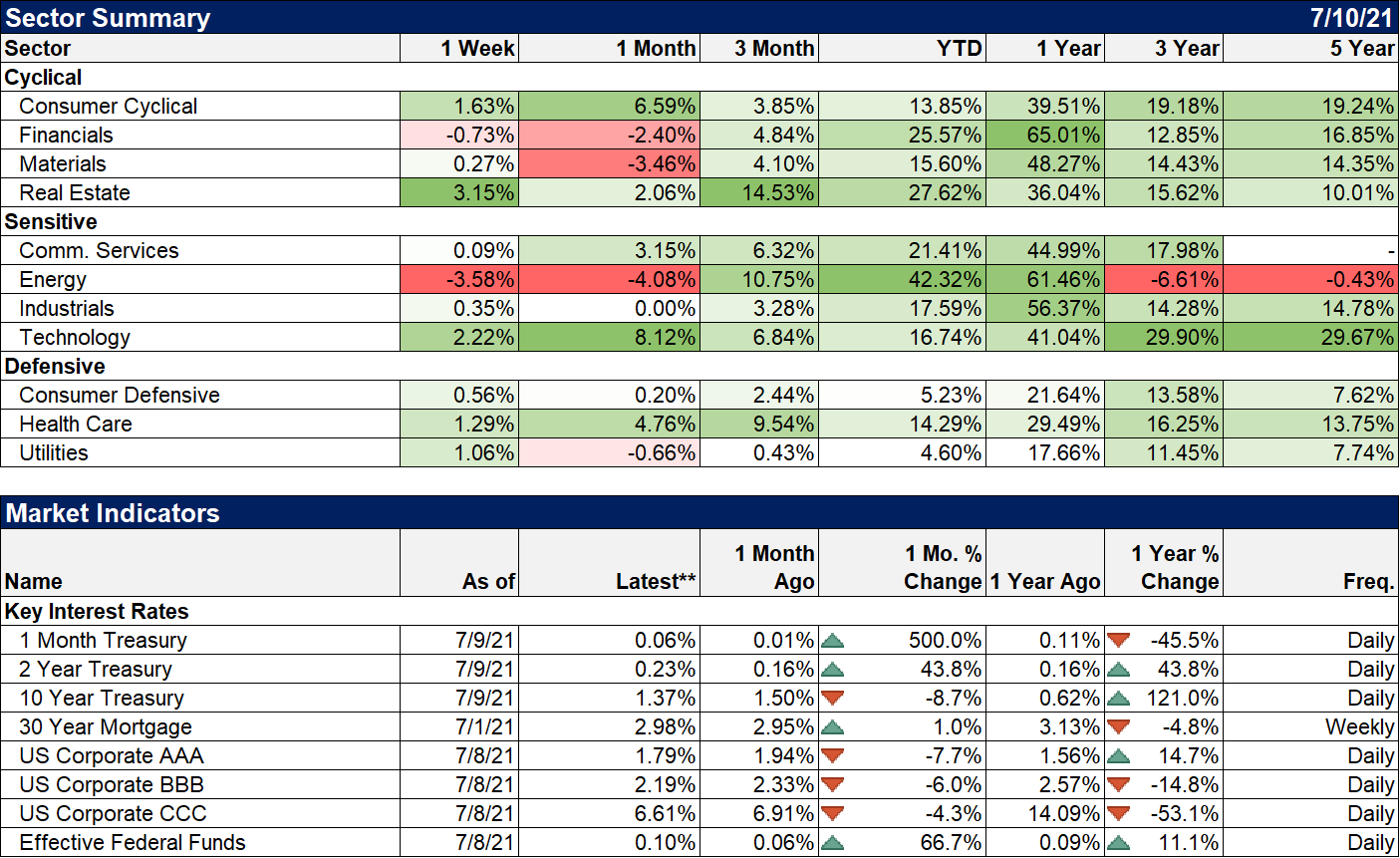 A few months ago all the financial press was about inflation and rising interest rates. That marked the top in yields. Now, it seems like every day I turn on CNBC or Bloomberg and all I hear about is the drop in bond yields and what it might mean. Are rates at a near-term bottom? It sure feels like it.