Do Rising ‘Global’ Growth Concerns Include An Already *Slowing* US Economy?

Do Rising ‘Global’ Growth Concerns Include An Already *Slowing* US Economy?

Global factors, meaning that the wave of significantly higher deflationary potential (therefore, diminishing inflationary chances which were never good to begin with) in global bond yields the past five months have seemingly focused on troubles brewing outside the US. Overseas turmoil, it was called back in 2015, leaving by default a picture of relative American strength and harmony.

The rest of the world’s economic system hasn’t really come back much, and there’s much to suggest we’ve already seen it’s best days anyway. The American piece in it, on the contrary, it has been characterized as a singularly impressive bright spot; especially the goods economy which by all ongoing symptoms remains in a frenzied state.

Does that accurately summarize the American end of things, though? We know questions abound as to abroad, but is what’s going on inside the US really an outlier?

Maybe not as much as it might otherwise seem. And I don’t mean that the rest of the global economy looks to be picking up speed in order to catch up and join the US frenzy on the reflationary side of things. On the contrary, there’s quite a lot of gathering data which is pointing toward a broader US trend looking a lot more like that around the world.

Serious questions have to answered locally, too. 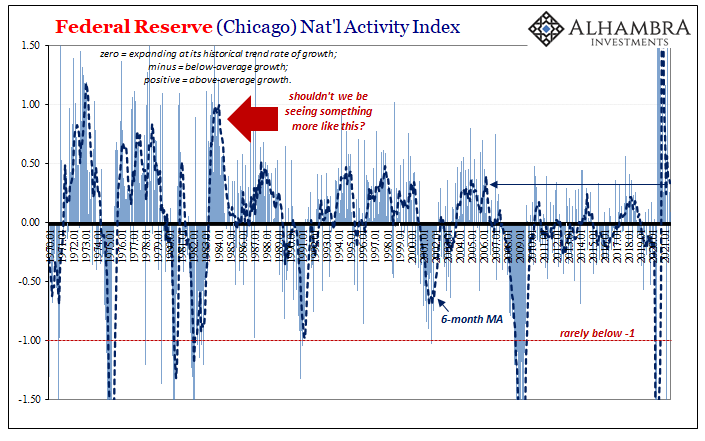 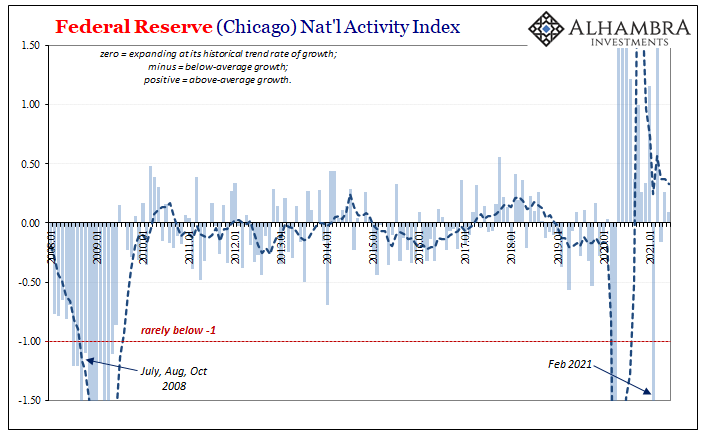 Start with a more esoteric yet comprehensive gauge like the Chicago Fed’s National Activity Index (CFNAI). You’d think, given the fuss about the goods buying mania, that if the whole domestic system were to match it, or even approach it, then this alleged inflationary boom would have to keep something like the CFNAI so far above zero as to be more like the early eighties.

It’s not working out that way, though, with the latest reading for June 2021 just 0.09; indicating growth barely above a trendline that had already been insufficient to begin with. And this is not just a single month variation or noisy statistic; the huge down/up in February then March aside, the past three months (April, May, and now the initial estimate for June) have been curiously lackluster.

The average for 2021’s second quarter was all of 0.06, compared to an average of 0.60 during the first quarter despite the huge dip in February. This points toward a considerable and sustained slowdown. 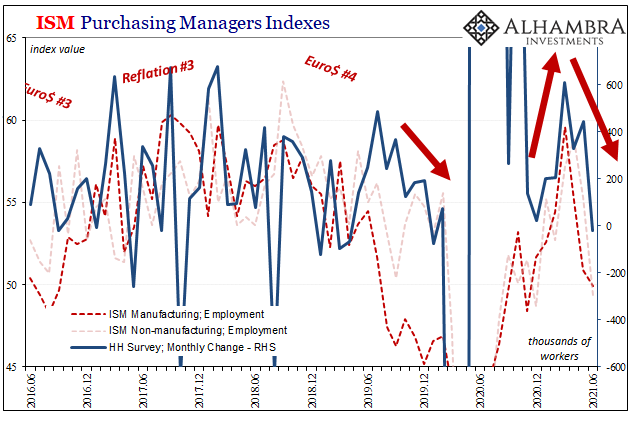 But it’s not just the CFNAI which is heading in that worrisome direction. Labor market data, the Household Survey as well as the employment components in both ISM PMIs.

There had been a huge, substantial drop for weekly initial jobless claims between the end of February and around the end of May. Lots more to have reopened, etc.

Since late May/early June, however, initial claims have again been stuck tilting toward an upward rather than continuously improving range. Not just a couple of noisy weeks, either, this has gone on for two months now.

At around 350,000 to 400,000, these are elevated levels. As you can see below, right on the edge of recessionary levels even though, as the NBER has just said, the recession, for that group, ended well over a year ago. So, a slowdown in the labor market this short of the finish line is itself another major potential concern. 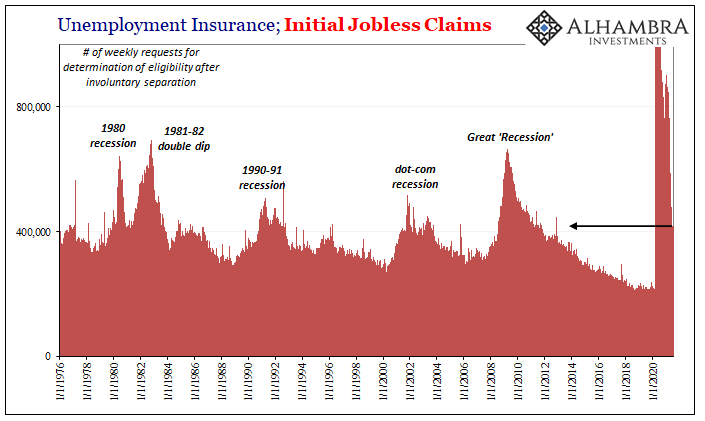 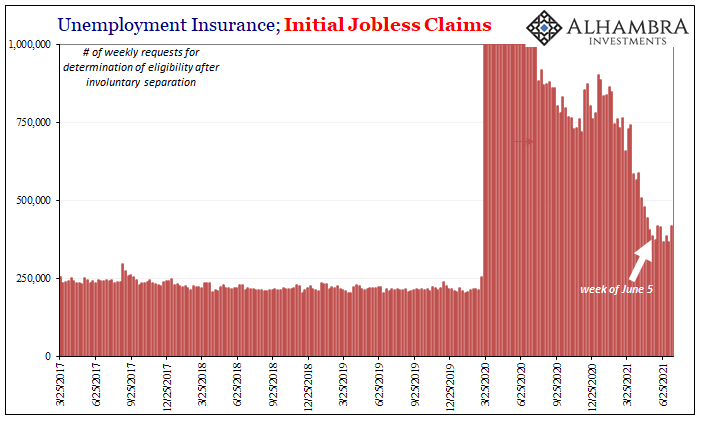 There has been a tendency to blame the recent drops in yields (confusing and confounding the hell out of the mainstream, by the way) and economic data on renewed COVID, or even their purported labor shortage.

Yet, CFNAI inside the US like jobless claims in May, June, and July can’t be either of those. No COVID restrictions had been reapplied during those months, the opposite, in fact. The latter measures a lot more than the labor market, while in the labor market initial filings for unemployment insurance would have nothing whatsoever to do with those already on unemployment (or already at home with kids who can’t go to school) we’re being told are unwilling to go back to work.

Both of these things indicate a potentially more serious change in condition therefore outlook, at least a pause, that very well could have materialized in the real economy way, way too early. Though this would be quite consistent with “transitory” inflation (which wouldn’t be inflation) and, if not statistical noise, growing uncertainty about the state of the rest of the global economy long before getting to delta COVID or whatever other it-can’t-be-economic-weakness excuse already or eventually put forward. 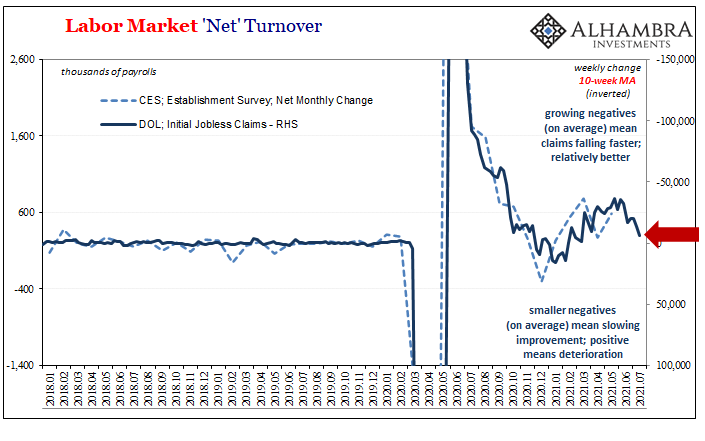 The rate indicated by jobless claims, for one thing, pushes the range for payroll (Establishment Survey) equivalence back down into the 200s range. When that was the estimate for April’s payroll report, it was not received kindly anywhere.

None of this is to suggest something like re-recession in 2021; which, from the NBER, they’ve already declared would, if it did happen, be a new recession and not a continuation of the last one. I remain highly skeptical and for reasons beyond the growing likelihood there hadn’t been a full, or anywhere near enough, recovery from 2020’s.

Some are calling this global growth concerns. While that’s true, given the possibility indicated in some important US data, those concerns really may not just be about everyone else. Despite retail sales numbers and those driven high in each of the last three CPI’s, there’s a real possibility the return of overseas turmoil very well could, once again, play out way too close to home. 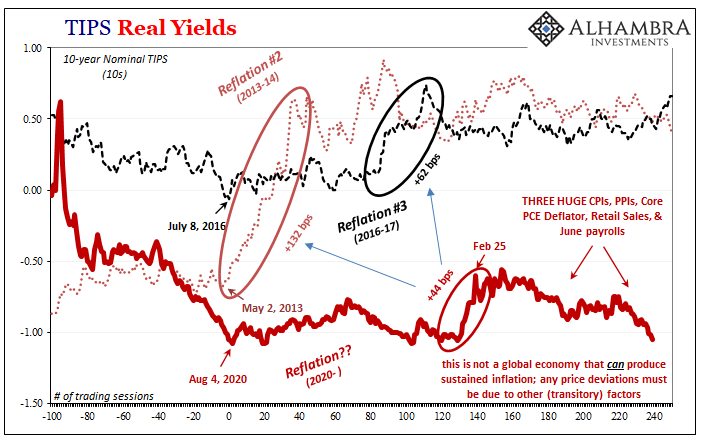