Like so many other monetary things, the name itself is misleading though it’s not immediately clear why. The Asian Financial Crisis (or Asian flu, as many called it back in the day) began in Thailand, became a financial crisis, and spread throughout, well, Asia. How else would anyone label it?

This name, however, radiates an impression that this was a lot of fuss and bother for overseas concerns and only overseas. Not so. The disruption may have begun seemingly innocuously in far-flung locales divorced and disconnected from everything but their own idiosyncratic problems, the real truth of the episode was that what started in mid-1997 before its ultimate climax in later 1998 had actually been a regional dollar shortage.

In many respects, a dress rehearsal for what began in August 2007; including the Federal Reserve’s initial farcical indifference.

The contagion which spread between various (and suddenly former) indestructible Asian Tigers essentially took down its greatest prey in the lumbering weakness that was Japan. And it is in Japan where the serious proportions of the dollar shortage truly came into view. I wrote my usual essay-length summary of the whole thing back in 2016.

For our purposes today:

One of the ways in which dollar problems were analyzed was in various decompositions of money market rates. The reported LIBOR rate of Bank of Tokyo-Mistubishi (BOTM) was compared to that of Barclays to get a sense of at least a baseline dollar difference; BOTM as one of the premium Japanese banks with implicit government guarantees representing therefore the best of what Japan could pay for dollars; what the rest of Japanese banks might be paying was anybody’s guess. In late November 1997, as the failures of Hokkaido Takushoku, Sanyo, and then Yamaichi roiled global markets, the spread between just BOTM and Barclays was an enormous 110 bps, so what was it for the any number of anonymous minor Japan institutions that had been lending heavily in Indonesia?

No trivial blindspot. Indeed, the growing yet unobservable dollar problems of Japanese institutions had already pushed the Fed to its own dollar interventions of still, to this very day, unknown proportions (the amounts for those were simply redacted from the transcripts in an extremely rare instance of FOMC censorship, undertaken for reasons never given).

US money dealers, in particular, had apparently taken much out of the “Japan premium” in exactly the way they should in any time period. Higher risk, charge higher rates and when the lending rate goes high enough then lend, lend, lend. That’s what eurodollar banks had done – until around April and May 1998.

What came next, I’ll hand it over to Peter Fisher, the Fed’s System Open Market Account Manager (FOMC transcript May 1998):

MR. FISHER. What interests me is that when I talk to bankers, many of them will tell me very frankly that their credit lines to their Japanese counterparties are completely full. That is, their traders are taking maximum advantage of trying to capture this premium and arbitrage it. But the bank credit departments are now in charge on an individual trade-by-trade basis, and they are up against their limits.

At a certain threshold, the interest rate would no longer matter. Exposure limits would (an unappreciated “friction”). Having first been charged exorbitant (yet appropriate) dollar rates, by the middle of ’98 the tap was turned down and, for some struggling, desperate Japanese, off entirely.

What happened during it has become entirely too familiar to those who pay attention to these things in the 21st century. Among other attempted workarounds, governments and private institutions throughout Japan and the rest of Asia were left with what had been an option exercised from the very earliest days of the eurodollar system.

And this is a countermeasure the Japanese, specifically, had been associated with from that very beginning. I wrote about this early history – and its relevance to what’s going on right now – just today. The pertinent portion of this one:

Unwilling to see any eurodollar default posted to the Japanese system [in December 1963], the Bank of Japan ordered its American reserve custodians in New York City to liquidate the same $200 million in Treasury bills being held on behalf of the Japanese government (the responsibility of BoJ). The proceeds from the sale were used to close out the eurodollar short, establishing a precedent that remains, and remains misinterpreted, to this day.

This entire 1963 affair, which began in Italy, swallowed the Swiss National Bank within it, and then robbed Japanese eurodollar borrowings of its $200 million in question, is a tangled web of monetary conduct having covertly taken over the primary roles of the reserve currency. Hardly anyone noticed, even as this very episode in question played out across FOMC meetings throughout the early sixties.

Bretton Woods was already toast by this point, but Federal Reserve officials, correctly surmising these specific Japanese motivations, couldn’t quite comprehend its true significance. From the December 1963 FOMC Memoranda of Discussion, dryly recounting:

It was reflected, however, in transactions in the New York money market; the Japanese government, for instance, was selling U.S. Treasury bills to provide funds for Japanese commercial banks to repay Euro-dollar loans they were unable to renew.

What point am I trying to make here?

It has been high misunderstood for far too long in this Fed-centric era (cult) which identifies foreign selling of Treasuries with everything it is not. In other words, there has been a long and consistent history which conclusively shows foreign selling of not just Treasuries but also T-bills and other US$ assets, both by private foreign institutions as well as overseas central banks and governments, is brought up and forced upon for entirely some form of dollar problem or shortage.

Not because they hate the US, or fear its government’s reckless profligate ways. Moreover, it has nothing to do with inflation except for the correlation between Treasury or US$ asset selling (at least diminished buying) and the deflationary reserve currency (eurodollar) condition driving it. 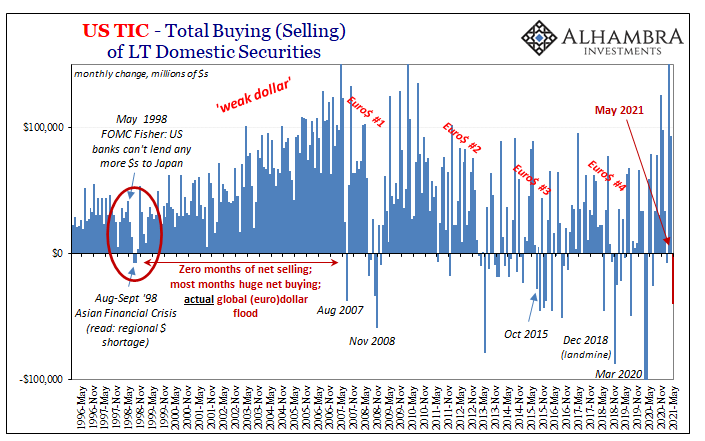 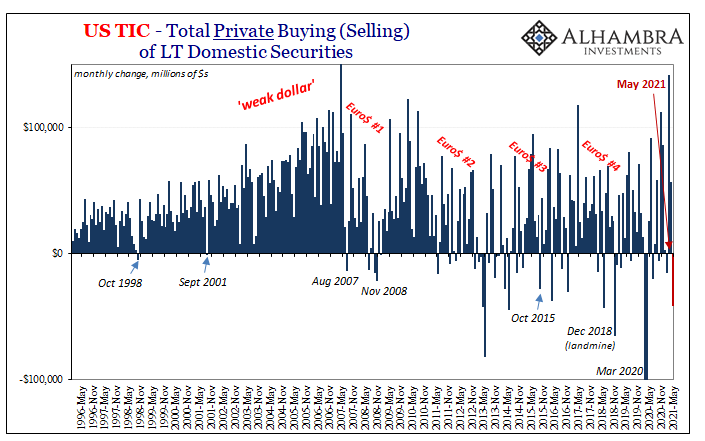 The Asian Financial Crisis, getting back to ’97 and ’98, came to a head around September and October of the latter year; LTCM and all that, another angle/dimension very much in the thick of it, which posterity records in all the wrong ways. Notice above the change in overall foreign behavior; less buying, on net, of US$ assets particularly Treasuries in the months (after May ’98) leading up to the big crisis finish with net outright selling (and LTCM).

Dollar shortage then overseas UST sales. These things go together as they have from the beginning (1963 was not the earliest example).

The converse is also true: between October 1998 and August 2007, not a single month of net selling (and only the one, September 2001, in terms of private transactions), instead only surging, insane levels of overall buying. It was so massive it forced Ben Bernanke to absurdly claim this was some global savings glut (a half-baked idea which, obviously, didn’t stand up to any honest scrutiny, but the guy had to try to come up with some theory that wouldn’t completely overturn the mainstream monetary worldview).

An actual and verifiable flood of (euro)dollars, to borrow a recent phrase.

On the far-right side of those two charts above, you’ve probably already noticed May 2021, the latest updated monthly TIC data. Flood of digital dollars, an overabundance of cash, these both allegedly explaining the Fed’s reverse repo use as well as, we’re repeatedly told, the general monetary condition of the dollar world. And yet, TIC says huge net selling two months ago (as, you may recall, deflationary global bond yields immediately thereafter picked up pace). 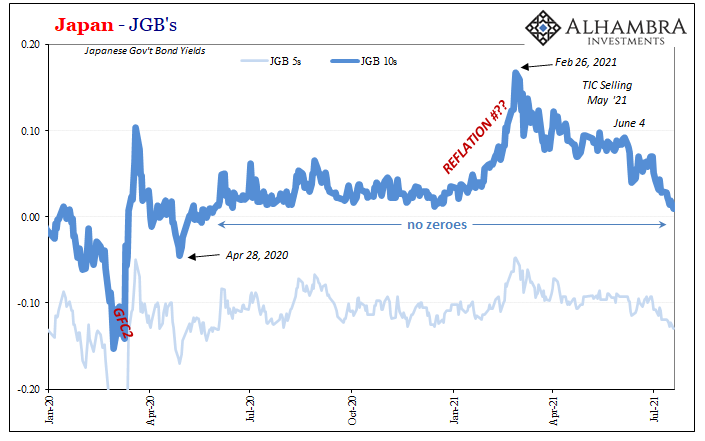 Not only would that correspond with our 1963 review, it does also among the better monthly examples of the post-2008 climate of repeated dollar shortages:

These are the kinds of declines in TIC associated with months like December and June 2018, October 2015, November 2008, and August 2007. Were foreigners of all kinds selling US Treasuries, principally, two months ago because they thought Biden’s government was being reckless? Or because they believed US inflation was about to go insane (like the mainstream interpretation of the CPI’s are saying)?

We know – without a single doubt – the answer to those questions. History has shown them to us repeatedly, consistently, concisely. Foreign selling of US assets is a specific warning, a more forceful one especially to this degree (it was a net -$40.3 billion in May).

There is evidently “something” wrong, deflationary wrong, dollar shortage wrong, in the global monetary system that would produce this in foreign behavior during May. If it was an isolated case, fine. But, as we’ve been writing about since, say, late February’s Fedwire, the data and the market moves keep piling up on the side of shortage.

An overabundance, even flood of bank reserves? Sure. That just doesn’t mean what it is supposed to mean.

Foreigners dumping Treasuries, on the other hand, still very much does. It’s just not what the mainstream has been led to believe which has always been contrary to six long decades of incontrovertible proof the public has never been shown. But it’s all right here, publicly available to anyone who doesn’t blindly swallow the Fed-as-God stuff.

The data may be a couple months behind, still in our quest to identify and gauge the potential for dollar problems and the warnings about that deflationary potential, yes, this TIC headline for May 2021 is definitely a similar warning and a significant one.

It does not indicate that crisis is right around the corner, rather it is yet another strong piece of evidence which strongly suggests the world is and has been heading down the wrong path.