Remember “The New Normal”? Back in 2009, Bill Gross, the old bond king before Gundlach came along, penned a market commentary called “On the Course to a New Normal” which he said would be:

“a period of time in which economies grow very slowly as opposed to growing like weeds, the way children do; in which profits are relatively static; in which the government plays a significant role in terms of deficits and reregulation and control of the economy; in which the consumer stops shopping until he drops and begins, as they do in Japan (to be a little ghoulish), starts saving to the grave.”

If you remember reading Bill Gross commentaries over the years, you know the piece was his typical mess of weird metaphors and obscure references that really amounted to nothing more than his usual talking of his book; why you really needed to put more money in Bill Gross’s bond fund. He got a little right – the global economy has certainly grown more slowly – but there’s a lot wrong too. The slow growth he predicts is a result of what he calls D, D & R – de-levering, de-globalization, and re-regulation. The only one of those that came true in the subsequent decade was deglobalization and that mostly in the rhetorical sense. The last prediction in the commentary is “The dollar is vulnerable on a long term basis.” Yeah, not so much. Bill Gross’s personal new normal is as the old guy down the block who really wants you to get off his lawn. Or his sculpture.

I started thinking about this phrase earlier this week while reading and thinking about the long-term impact of pandemics and plagues (example: https://www.frbsf.org/economic-research/files/wp2020-09.pdf). As I often do when I am preparing to write a commentary, I started with a Google search (something that actually is a new normal). At first, I wondered if my memory was playing tricks on me because googling “New Normal” didn’t turn up any reference at all to Bill Gross. The phrase, it turns out, was coined by Roger McNamee to describe the period immediately after the dot com bust. According to McNamee the New Normal:

“calls for fresh thinking and for smart adaptation, for a focus on relentless execution and on solid performance. The New Normal also calls for a steadfast approach to business that reinforces the cardinal virtues of honesty, integrity, and authenticity.”

Coming just about a year before the founding of Facebook, I can’t imagine a worse prediction about the future than one that expects Silicon Valley to honor the virtues of honesty, integrity, and authenticity. To his credit McNamee, an early investor in Facebook, became very critical of the company’s impact on society and democracy. I may have missed it but I don’t remember him giving back any of the money he made on his Facebook investment despite a dearth of said “honesty, integrity, and authenticity”.

Whether McNamee or Bill Gross first used the phrase is irrelevant. I’d venture to say that there was someone before Roger McNamee that also used the phrase because we always want to know what the future holds, what the new normal will be. And we always seem to make the same mistake trying to predict it. In 2003 when McNamee was using the phrase, we had just come through the Enron and Worldcom scandals and the numerous other minor frauds that constituted the dot com bubble. A period where “honesty, integrity, and authenticity” would prevail was as much hope as prediction. It’s what we wanted and Roger McNamee was smart enough to put into words what we all craved. After the 2008 crisis, we wanted an economy with less debt and more regulation (on Wall Street at least). Bill Gross was looking in a mirror, not a crystal ball. It is normal to think the future will solve all of today’s problems somehow. It is also normal to assume that today’s conditions will be extended into the far future. The prosecution of Bernie Ebbers and the Enron crew seemed to herald a new era of law and order on Wall Street – at the same time some smart salesman at AIG was figuring out how to turn junk mortgages into AAA credits. Likewise, after 2008 it seemed logical to expect “austerity” to lead us to a low debt future and for Dodd-Frank to usher in an era of government oversight. Ahem.

I have no more idea what our new normal will be over the next ten or twenty years than McNamee or Gross did. I have spent a lot of time reading and thinking about the post-pandemic period and all I can say with any degree of confidence is that the post-pandemic economy – and society more generally – will be quite different than what prevailed before March of 2020. Past pandemics have produced changes that lasted or developed over decades to become the new normal. The economy is undergoing profound changes right now, attitudes about work and health and safety and family and life shifting, to produce an effect that stretches from the latest employment report to a generation of young people suffering the impact of remote learning and the influence of a now at home parent. Monetary and fiscal policy are interacting in ways no one expected a few years ago with results no one could or would have predicted. A new cold war, nominally pitting West against East, is re-ordering global supply chains and testing the boundaries between foreign and economic policies.

There are some common characteristics of past post-pandemic periods that seem to be already apparent in our current economy. Low real interest rates, a drop in labor supply, and rising productivity, are all prevalent after pandemics and this one is no exception. In the case of past editions, on average those conditions prevailed for many years – decades – after the pandemic. Whether that is true with this version is yet to be determined. There are, however, differences between this pandemic and past ones so your results may vary. The drop in labor supply today seems to be more of a choice where it most decidedly was not following the Black Death. Rising productivity is a function of the lack of workers, not investment. Wages are rising, also a reflection of the changing workforce, but loose fiscal and monetary policies have stolen the wage gains through inflation. Low (negative) real rates in the past prevailed due to a lack of investment opportunities and it certainly does today as well; why else would anyone buy a 10 Year TIPS with a -1.1% yield.

The New Normal looks a lot like the Old Normal in that it is unknown and ever-changing. All we can do is observe the present with clear eyes which brings me to last week’s market action. We started the week with interest rates resuming their fall, the 10-year Treasury yield hitting a low of 1.13% and ending the week up 5 basis points to 1.29%. Along the way, we got a terribly disappointing ADP employment report, a stunningly good official employment report, a record high in the ISM services index, a 0.5% drop in the unemployment rate, and a widening trade gap that someone, somewhere must surely be worried about. The employment situation is far from perfect and we are still short a lot of jobs since the beginning of COVID, but the market reaction was pretty clear. Friday, in the wake of the improvement in the jobs data, gold fell 2.5%, the 10-Year Treasury yield rose 7 basis points, the copper/gold ratio jumped 2.6% and the yield curve steepened, all indications that the market viewed the report as quite positive. The only thing that seems to stand in the way of continued improvement in the economy is the Delta variant, shipping delays, chip shortages, a lack of willing workers, rising input and output prices, major COVID outbreaks in Asia, and a government full of people who have no idea how a real economy works. There are always “challenges”.

For now, the economic outlook is still pretty good. It isn’t the boom everyone was expecting a few months ago and it probably won’t be, but the economy is still improving. The long-term, the new normal? Well, our economic output is higher than the previous peak in Q4 2019 while we employ nearly 7 million fewer people. Is that good or bad? Is it possible that those 7 million people are now free to do something better than they were doing before? Something that has a bigger impact on society as a whole, like spending more time with their kids? Or starting a new business we didn’t know we wanted or needed? Maybe. We don’t know, can’t know right now. The future and the new normal will be determined by millions of people making the best decisions they can for themselves and their loved ones. We all have, within our own actions, a role to play in how the future develops. Here’s hoping we do a better job this time. 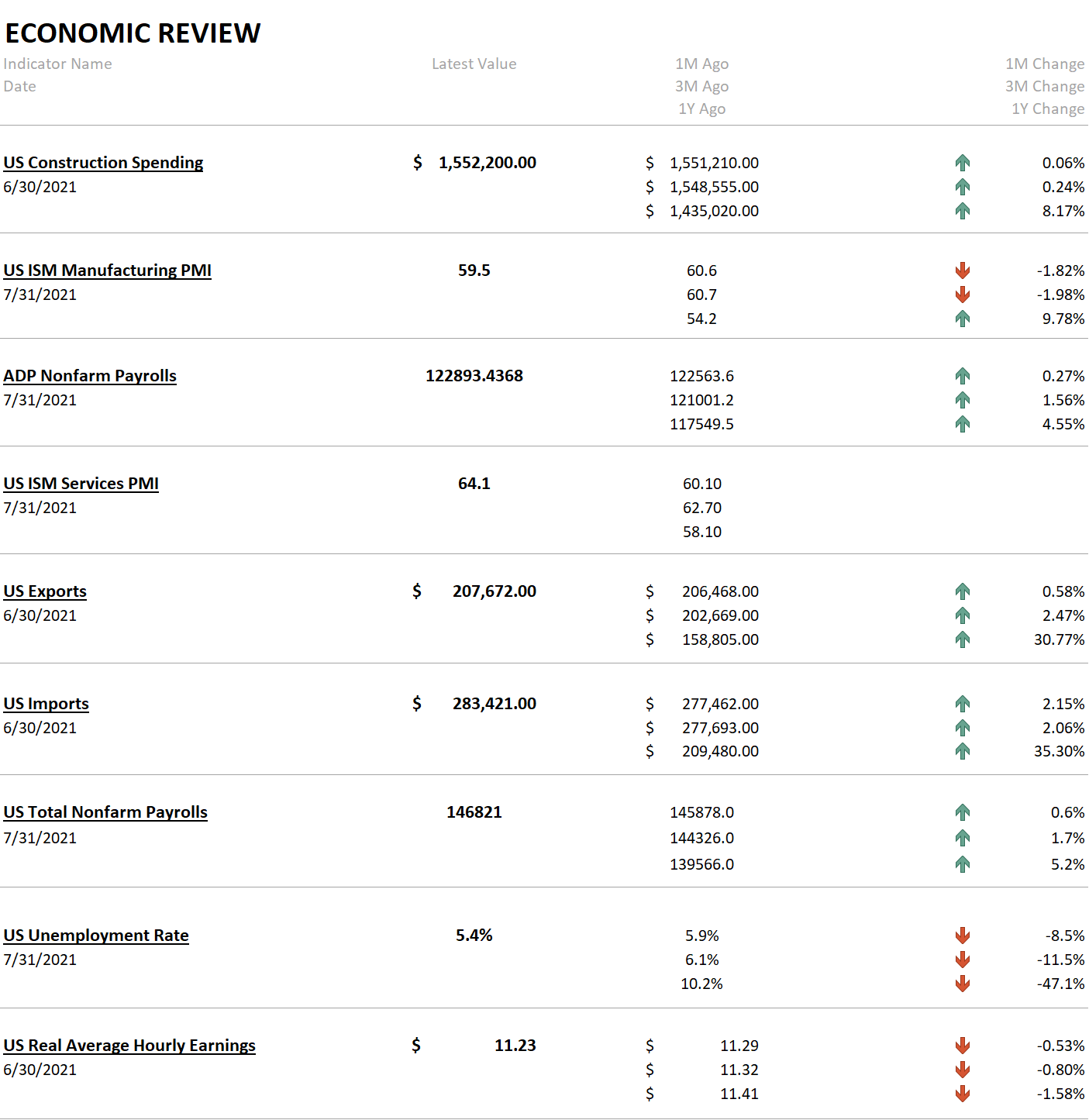 We get another look at the jobs market next week with the JOLTS report on job openings. We also get some inflation readings that I expect to stay fairly hot or at least perceived that way. 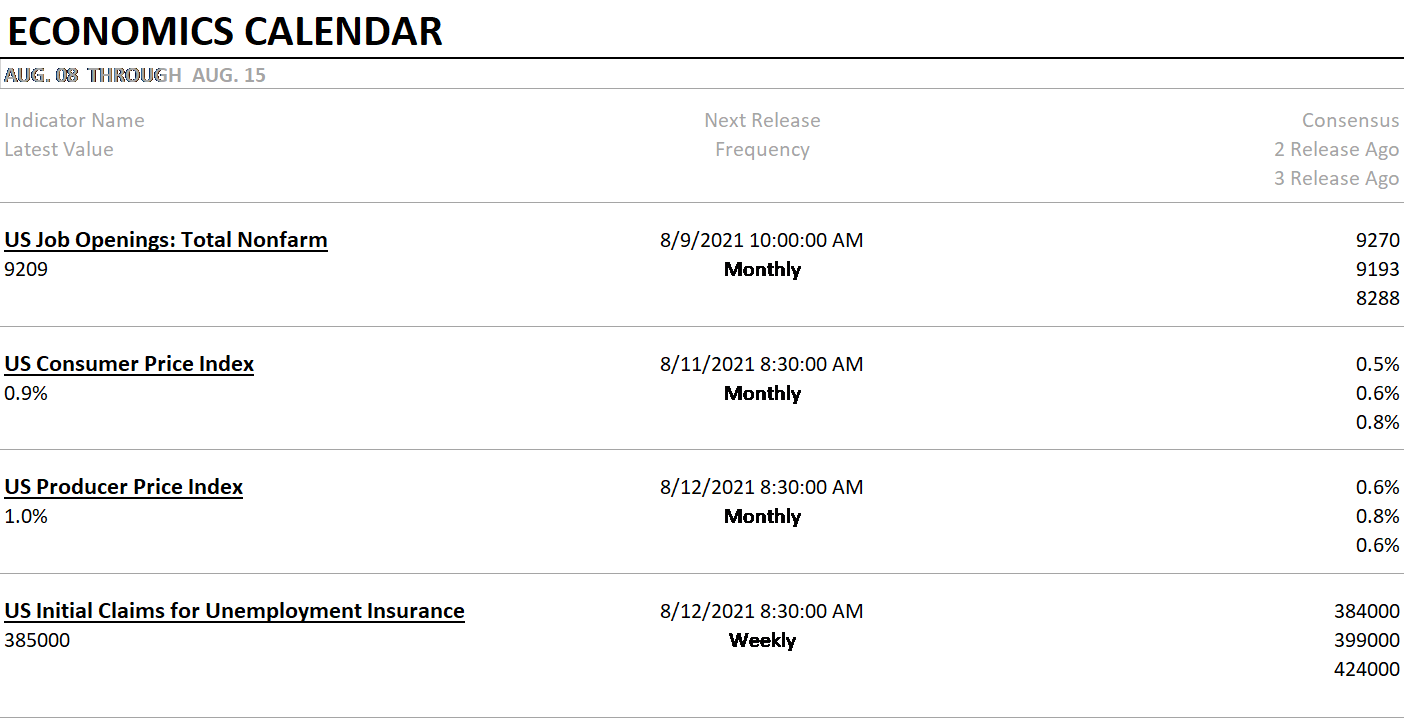 There was more noise than signal in the performance of the markets last week. The dollar was up and had an especially good Friday after the employment report. The economic environment remains neutral on the dollar and positive, for now, on economic growth. Commodities took a hit last week as the dollar rose but still leads YTD and over the last year. Even with a good bid for the dollar, foreign stocks managed to outperform. Until we get some clarity on the dollar the foreign vs domestic argument will have to wait.

There was little difference last week between growth and value but if the yield curve continues to steepen I’d expect value to win along with financials. 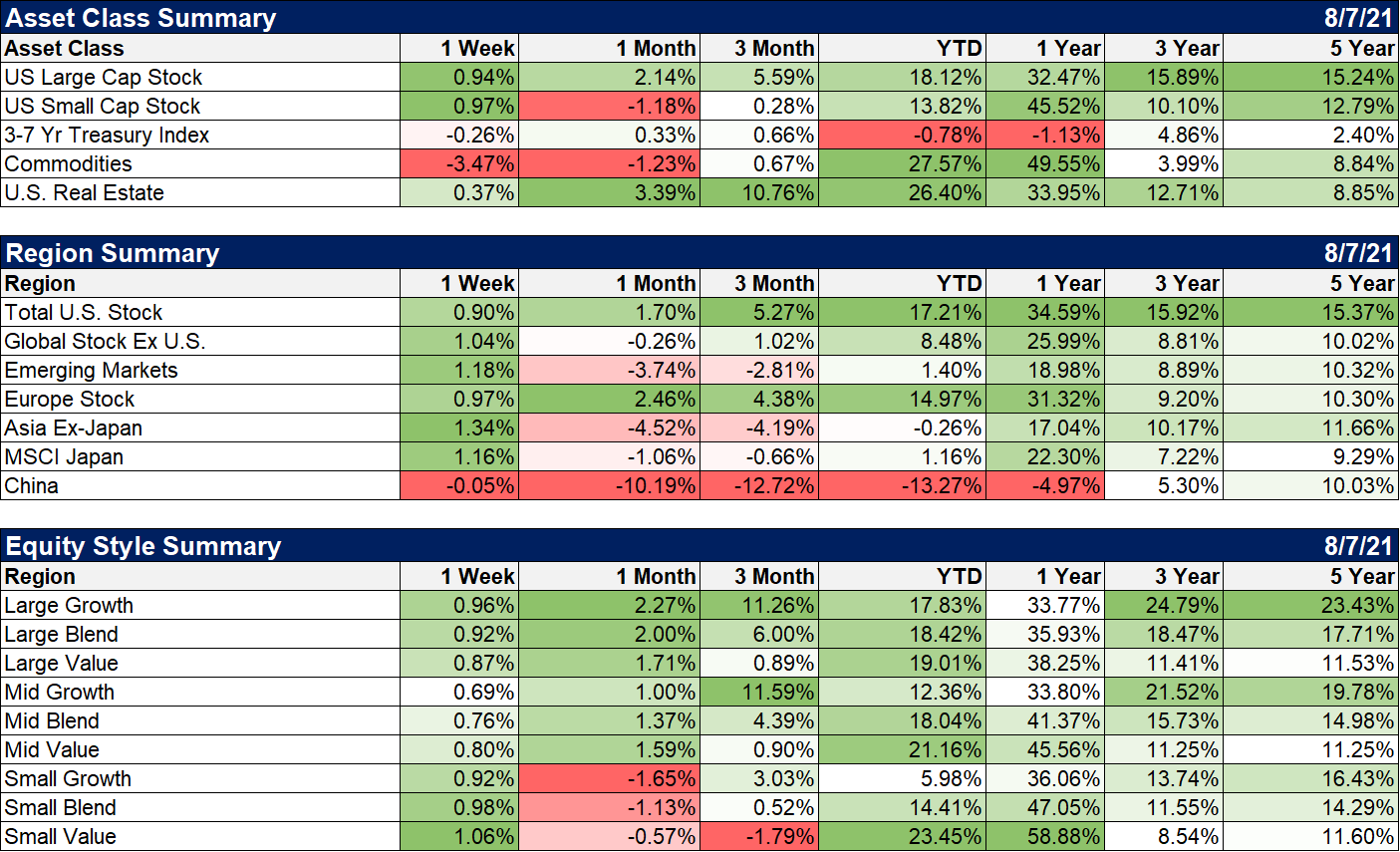 Financials were the winners with higher rates and a steeper yield curve. 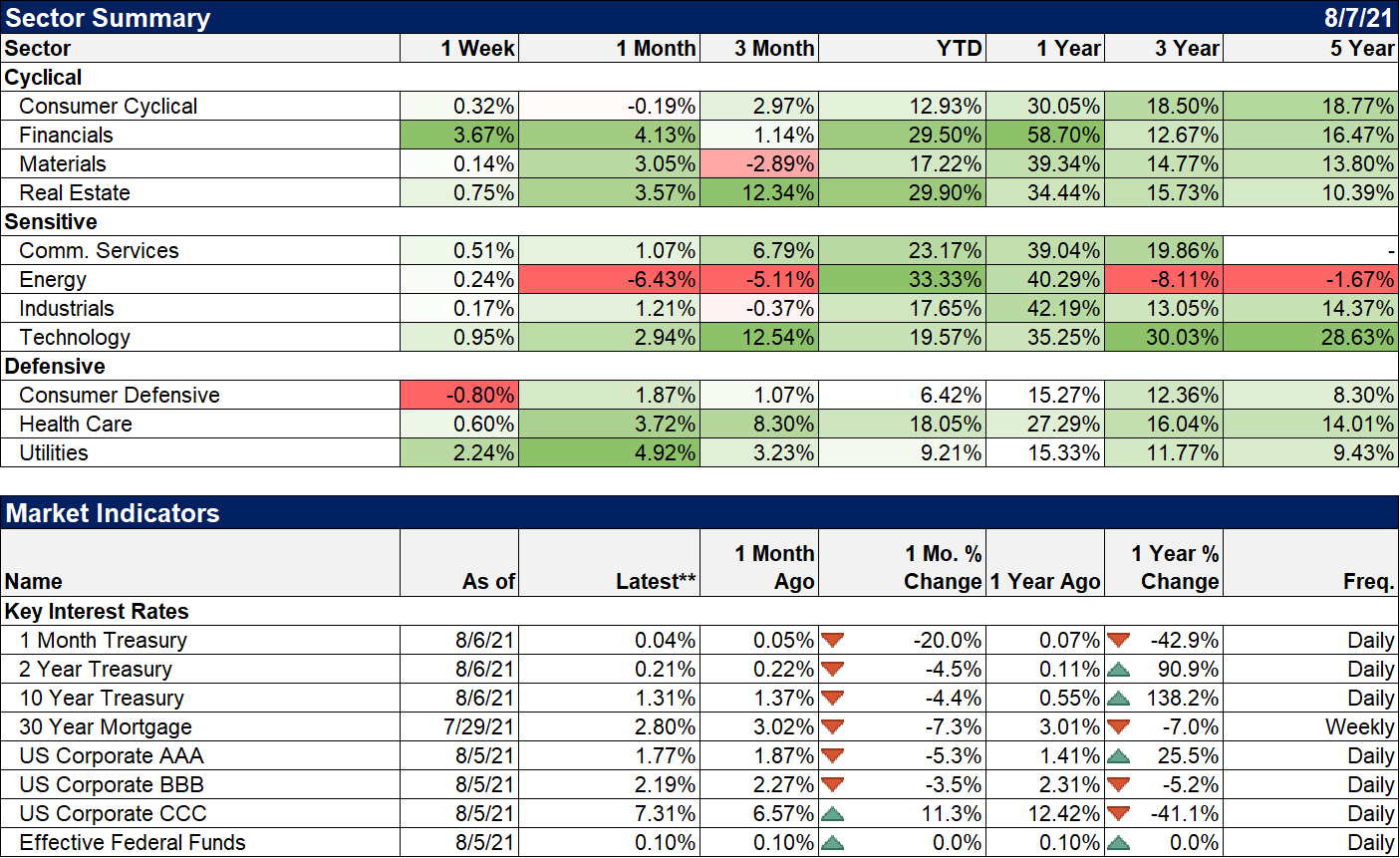 The New Normal is really nothing of the sort. I don’t know of anyone who predicted where we are today. I hear people say, well, of course not, look at the extreme things that have happened. But extreme things have always happened, are always happening, sometimes the same extreme things like pandemics. And even with access to the historical record, all other things are rarely equal as the economists say, and we still can’t predict the consequences, the changes in norms we assume, expect are coming. Maybe we should stop trying, stop dreaming about the future and start living in the present. Just a thought.