Fitting, in a way, that with so much having come out this week, the 10-year Treasury yield would end it at almost exactly the same price/yield as it began. In between, another epic CPI, ’74-style PPI commodities, and now rounding out the BLS inflation trifecta today was the fourth straight double-digit gain (year-over-year) in import prices.

To the latter, the index may have been up 10.2% in July 2021 compared to July 2020, but this merely another dataset drawing out a pattern more and more emerging from all these inflation series. It is yet another leaning further in the direction of “transitory.” 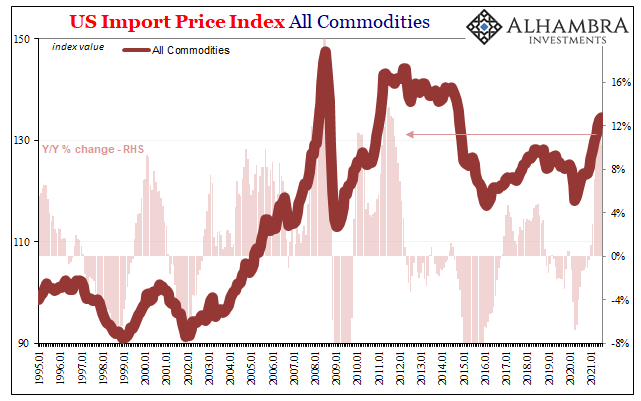 Though 10.2%, this is down from 11.3% last month (second derivative deceleration) and a top speed of 11.6% back in May. Viewed from the basis of monthly changes, seasonally-adjusted import prices slowed considerably going from June to July; up just 0.3%, but, again, more importantly invoking the same likelihood as those particular measurements from the CPI and PPI. 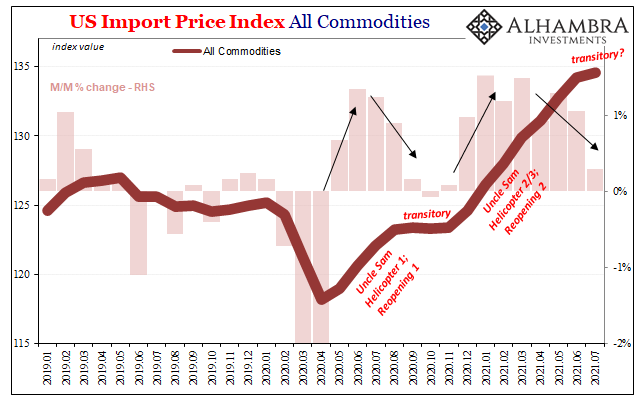 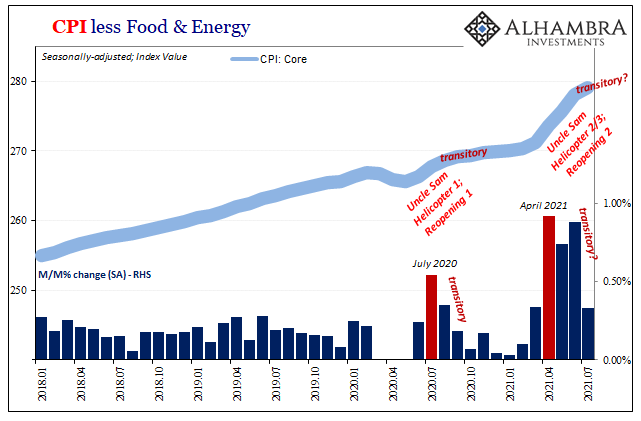 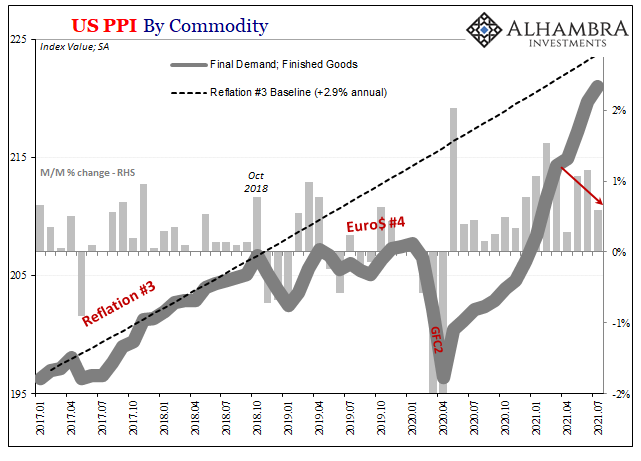 This inflation trio, however, wasn’t the only market-moving notice this week. After very modest reflationary selling had knocked the yield on the 10s upward to around 1.37%, first Wednesday’s blockbuster auction in the same instruments added to the reversal already setting in.

That rebound in negative sentiment (falling, deflationary rates) was unaffected by import prices, or at most the latest BLS estimates contributed some modest buying to the lower trend in yields due to this third inflation set to do more than wink at “transitory.”

Today’s real mover, however, was the 10am EDT release from the University of Michigan’s Surveys of Consumers which contained a shocking collapse in consumer confidence “no one” saw coming. The consensus forecast for its preliminary August 2021 combined index had been anticipated to end up around the same as in July, or 81.2 each.

Instead, 70.2. Not only was this a huge miss to analyst expectations, it was also lower than last year’s recession trough (71.8).

The same also held in the survey’s expected index, or what consumers are saying about what they see for the near-term future. This other dropped to 65.2 this month from 79.0 last month, meaning this one quantified mishmash of consumer opinions about the future forward from August 2021 was likewise less than forward opinion had been in May 2020 (65.9).

The Economists in Ann Arbor didn’t have anything good to say, no kidding, about these preliminary August results:

Moreover, the declines covered all aspects of the economy, from personal finances to prospects for the economy, including inflation and unemployment. Consumers believe the economy’s performance will be diminished over the next several months, but the extraordinary surge in negative economic assessments also reflects an emotional response, mainly from dashed hopes that the pandemic would soon end.

Renewed fears about renewing government (over)reactions to whatever COVID wave we are told the world is experiencing are certainly a big part of the negative reaction. That’s not the whole of it, though, a realization better revealed once you line up the general outline of post-recession consumer sentiment (Michigan’s version) with those parts from the BLS troika: 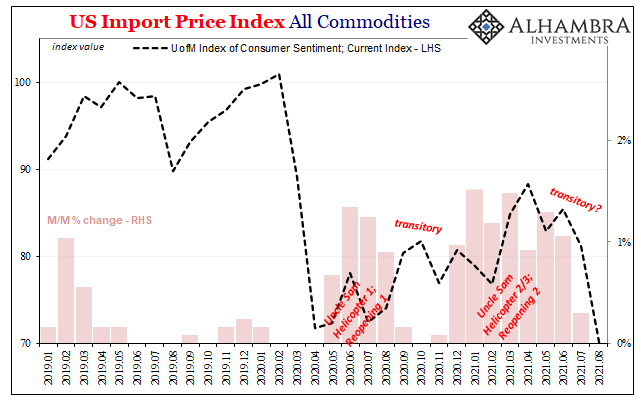 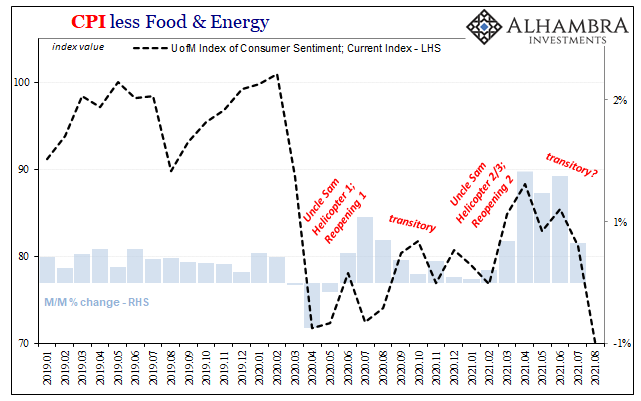 This rolling over has been in the works across consumer sentiment as well as inflation calculations for several months; which was picked up on in global bond markets even further back (we still have Feb 24-25 circled on the charts as their beginning inflection).

It is, anyway, a decidedly negative concoction; the inflation estimates demonstrating the progressively clear temporary effects from “stimulus” thereby revealing the much weaker, less recovery-like underlying economic state the further we traverse in time away from the federal government’s monster (monstrous?) transfers. And now on top of that ugliness, at least a duo of Greek letters (delta, lambda) playing further upon the public’s pandemic fears.

So, how do we reconcile the fact that over the last two months (June and July 2021) the US CPI has finally repeated that 2008 feat; two in a row greater than 5%? Treasury yields – consisting of growth and inflation expectations – are today confoundingly tiny by comparison. The 10-year around 1.34% substantially less than what would have been a record low before last March’s eerily similar Treasury OTR/OFR bifurcation.

The reconciliation between high levels of indicated current consumer price increases with forward-looking measures of growth and inflation in the form of exceptionally low yields is really quite simple, straightforward, and intuitive (outside the Fed’s Fed-centric worldview). Even the BLS data already indicates the answer, one priced into global bond markets for many months already.

This bout of “inflation” isn’t likely at all to meet the definitions of actual inflation, not really. A consumer price deviation, sure, and a pretty substantial one. However, one of those only becomes inflation with a monetary background necessary to ensure it is sustainable beyond a few months (see: Summer 2008).

The monetary system itself is more and more certain this just isn’t going to happen, for increasingly evident reasons. Furthermore, prices/yields show it’s already not happening.

And now quite a bit of the inflation data is coming in just the way deflationary potential in money had predicted. With a third BLS report and today’s UofM, I’ll just sum up this entire week by reprinting what I wrote following Wednesday’s CPI:

In other words, should inflation rates continue to play out as they have, each simply the predictable results of, yes, transitory factors having their day and then fading away into ugly history. From supply problems to base effects and mostly Uncle Sam, these aren’t permanent changes to the situation no matter how many times the last of those is called “stimulus.”

Instead, easily foreseeable, once those recede sufficiently what’s left is what was there underneath the entire time – and, as we keep finding in global evidence, the basis and basics behind the US economic rebound may not have been nearly as awesomely robust as (inflationary) advertised. On the contrary, all of that fluff (Warren Buffett’s second shot at “red hot”) mainly the product of those, yes, transitory artificial factors.