From The Blackest of Mouths: China’s (deflationary) Slowdown Picks (way) Up

From The Blackest of Mouths: China’s (deflationary) Slowdown Picks (way) Up

At great risk of upsetting China’s army of censors, I’m going to “slander” the Chinese economy anyway. Were I a comrade within that particular nation, I’d now get labeled a “black mouth” spreading misinformation in the form of actual up-to-date data published by the same Communist government fearing its spread.

Where and when this formula applies to China, however, political rate of change only goes in the one direction; the same one whose arrow arbitrarily accuses anyone who does not simply knuckle under and claim Xi’s regime perfection and the results of its management inevitably a true humanist paradise.

Should you deign to “slander China’s economy” Xi’s cybergoons will descend first upon your online presence and profile to ban it (as a start). But, is talking openly about China’s economic condition as given by its current statistics really the same thing as Charlotte Anita Whitney openly and directly inciting violence a century ago in a different place?

If you are Xi Jinping, it just might be the same as inciting violence if only when China’s current economic circumstances just might lead the Chinese people to think differently (or any more) about their current state.

The latest economic figures from the Chinese National Bureau of Statistics (NBS) attest to this predicament, thus do enough on their own to smear the economic reputation as would any rational, legitimate commentary about it. According to the Communists themselves, things aren’t going so well (a fact already made pretty plain by this latest authoritarian directive). 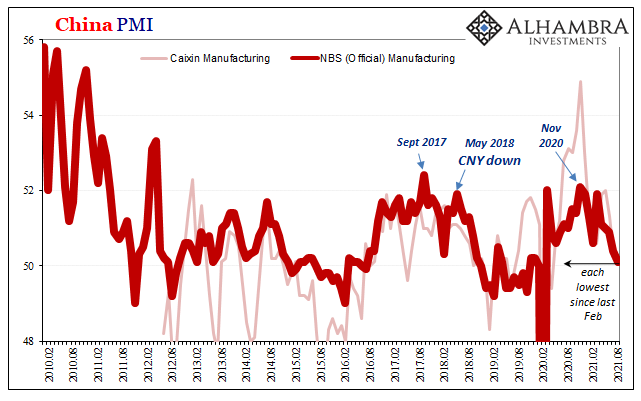 Manufacturing sentiment bordered on the worst during August, with the official PMI for this sector coming in at just 50.1, down from 50.4 in July. While production output – in these PMI terms – maintained somewhat, 50.9 this month compared to 51.0 last month, all the forward-looking measures turned decidedly weak(er).

New orders (index) in manufacturing dropped from 50.9 in July to 49.6 in August. Those for exports declined much more than they already had (and this is a point we’ll come back to). This particular index had already been down at 47.7 during July and only went another whole point the wrong way to settle at just 46.7 this month.

As bad as those were, it was absolutely worse on the services side. NBS’s Non-manufacturing PMI simply collapsed: at 47.5 for August, that’s down almost six points from July alone and nearly nine since March. Like the manufacturing PMI, the services index had also peaked way, way back in November 2020. 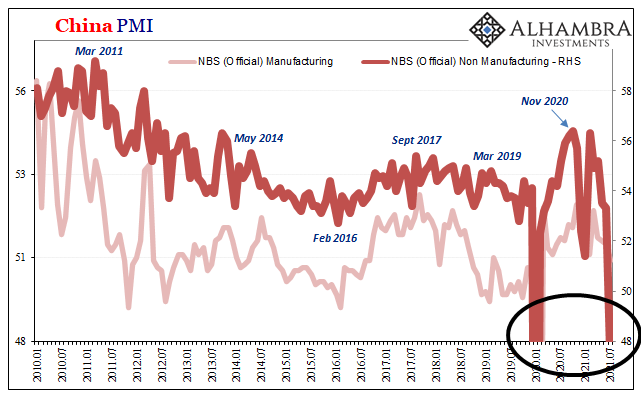 From the perspective of Xi Jinping, by themselves these figures provide no slander. Yes, China’s economy isn’t doing well but he’ll claim this is simply a product of Communist priorities being placed elsewhere. Gone are the days of growth at all costs (19th Party Congress).

What we have and will hear from all the “right” “experts” about these numbers (and more) is the typical excuses. And so long as anyone cites the data in conjunction with those apologies, Xi won’t likely take umbrage.

They are: COVID, weather, and, returning to the scene, the government’s keen effort to combat smog by forcing manufacturers to factor emissions again (so 2018).

There would be no “black mouth” risk for anyone sticking the facts of data to this rolodex of approved justifications; apart from the one thing which does stick out like a sore tongue.

Export orders. Both manufacturing and non-. 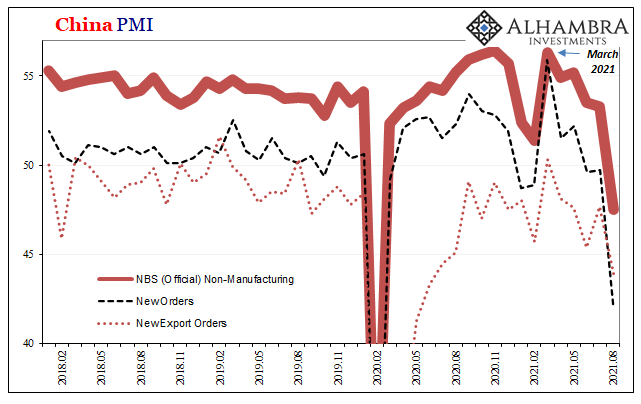 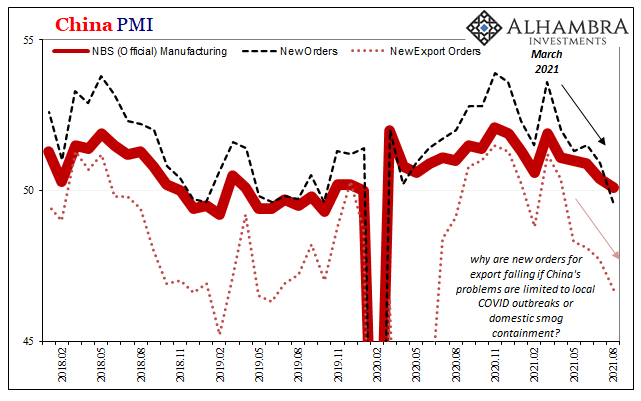 What do declining export orders – for the whole of China’s economy – have to do with Chinese restrictions internally? How do much more recent delta COVID and emission-concerns explain this major slowdown going all the way back to March (really last November)?

It can’t be China’s problems are just of their own choices, a fact Xi knows only too well; therefore, the ratcheting of only further crackdown. If instead Chinese economic trouble was linked to, as well as representative of, raw, pure macro weakness the world over then regime perfection and humanist paradise would be something very different from appropriate conclusions.

To slander the government’s handling of the economy is to point out the facts while also the most logical, rational interpretation of them. To stay within the approved lanes is to simply rote recite the mainstream points dismissing those fact’s pretty clear, sizable significance.

Weird how those excuses always come down in favor of the top-down structure. Whether forced to salute China’s Communists and their handling of a situation which only gets worse or reflexively praising the Federal Reserve and its “easy money” easy successes bolstering, purportedly, the macro picture outside of China, each the product of deliberate politicking rather than skillful administration.

The designs and ultimate aims for each are the same: to preserve the status quo at the expense of everyone else. Never recovery.

As the Summer of 2021 heats up, like the Summer of 2020 the world over is (predictably) fundamentally cooling, experiencing another “unexpected” retrenchment of this already uneven and uninspiring rebound.

Over in China, the Communists are ready to admit this fact if prohibiting anyone from saying much legitimate about it. Here in the US, taper and all, as well as across the free West, we aren’t even supposed to recognize what’s fact. 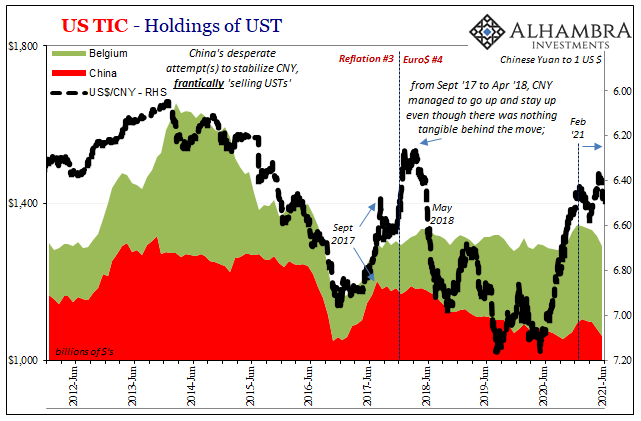