Turning The LABOR SHORTAGE Up to 11

Turning The LABOR SHORTAGE Up to 11

In Massachusetts, the Federal Reserve’s First District, restaurateurs have struggled mightily to find workers. As part of the central bank’s Beige Book, one contact of the Boston leadership said the industry was “facing the worst labor shortage he has seen in 35 years of experience.” In response to such a major threat, these firms become truly creative to try to entice employee prospects.

According to the text of the Fed’s document, it’s not just restaurants, either, as this deficit has been seen in high tech areas, too:

Tight labor markets are seen for at least some positions in each of retail, manufacturing, and software/IT services, and a severe labor shortage is said to restrain hiring and expansion in Massachusetts’ restaurant industry.

That’s really the message here; lazy Americans are restraining the economic potential of what would otherwise boom the living daylights out of the economic world. If not for the lackadaisical sitting idle on their couches, enterprising business owners would be up to their eyeballs in legit volumes rather than being held back by John Q. Disgrace-to-Humanity.

Not just Boston or New England, either. Here’s Texas (again Beige Book), where the labor shortage sounds even more serious:

A shortage of low-wage workers led to scattered wage pressures in a few industries, such as apparel, retail and the hospitality industry. One contact attributed the labor shortage to a recent influx of telemarketing firms. Contacts reporting wage pressures said they were already paying above the minimum wage, with the exception of a couple of apparel firms and one retailer. Engineers are reported to be in short supply, particularly for the telecommunications industry. Wages were rising for engineers and production workers in Dallas, as well as computer programmers and computer scientists. Highly skilled construction workers continued to be in short supply, leading to wage pressures…

Unemployment bonuses are this bad?

Well, no. I have no idea what was going on in Boston but it wasn’t a more generous Uncle Sam because the first quote from the Beige Book above dated to July…2016. The second, referring to conditions inside the Dallas Fed’s Eleventh District, was published in October…1996.

At least with that one we know its source – an actual economic boom as opposed to something very, very different than one the twenty years after.

There is always a labor shortage somewhere. In every sort of economy, good as well as bad, at all times, you can find some group of owners or managers which will complain about not being able to procure labor – at prices they wish to pay for it.

In addition, there are likewise structural issues that have nothing whatsoever to do with macro forces. It takes time to train, for example, those laid off or aspiring to leave a low-paying, low-opportunity industry as over time more and more of the labor force slowly realizes better fortunes can be found elsewhere.

This post-2008 LABOR SHORTAGE!!!!!, however, a slogan which merely repeats with extra emphasis through the years, it tries to transform these microscale anecdotes and genuine incidences into some massive macro phenomenon essentially to let the status quo (such as the Fed’s ineffective QE policies) off the hook.

It’s not that business won’t or more often cannot pay the market-clearing wage because the economy is actually somewhere between underperforming and awful since the status quo doesn’t work, no, no, rather this LABOR SHORTAGE!!!! stuff turns everything around to blame you and me, us lazy Americans, for thwarting what otherwise would have been the obviously awesome successful-ness of more than a decade of official (including fiscal) efforts.

The usual suspects (central bankers seeking some “honorable” exit, bond kings, the media, etc.) are, in 2021, still at it – even more intensely than ever.

This is not to say there aren’t legitimate pockets of shortages in one region or another, or being experienced right now by one industry or another. These are happening and there is some (limited) truth to the “lazy” $300 argument. Whether or not it explains the broader shape of the labor market and therefore economy is the issue; are these anecdotes more and different than the typical fare found throughout economic history? 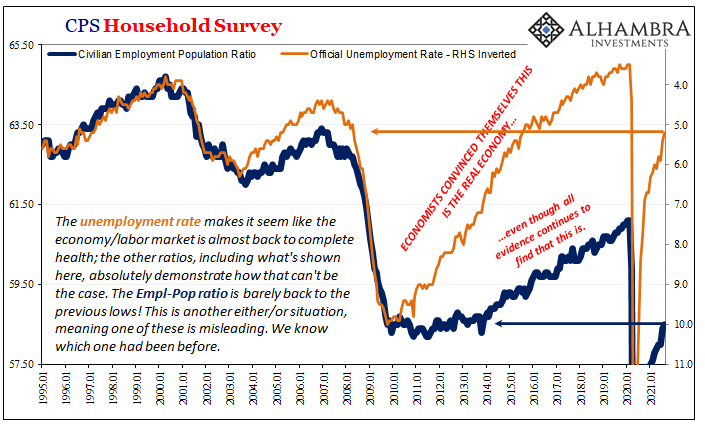 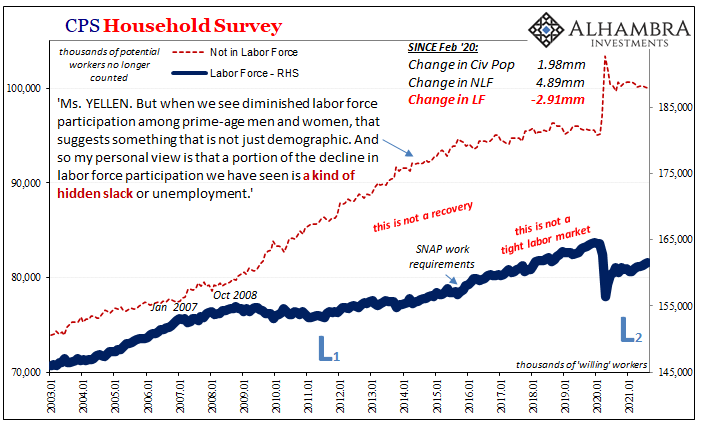 Data for this remains sparse. Other than the unemployment rate which is even more flawed this year than in those past when it was already highly misleading, the LABOR SHORTAGE!!!! has repeatedly been able to count on only one other from the BLS. And that’s Job Openings (JO).

Over the past several months of JOLTS, the series where JO comes from, the BLS has estimated something like the hysterical voices easily found in almost every form of commentary on the recent economy. By February 2021, the government believes that the number of JO it is able to discern and sample (then extrapolate) was as high as it had been at the 2018 peak – which, I’ll remind you, did not amount to a macro labor shortage, either.

Since February, companies have reportedly gone nuclear posting online for what we’re led to believe are “new” positions. As of the latest update for the month of July 2021 (JOLTS is one month further in arrears than CES and CPS), figures released today, the JO series has soared to almost 11mm! This compares to the previous 2018 record which hadn’t quite reached 7.6mm.

Maybe JO didn’t quite picture a real shortfall three years ago at 7.6, but now turned up to 11?

For one thing, the rate of hiring (HI) has moved up if only in the past few months. This had been seriously and curiously (for the shortage) lethargic up until May. At a monthly rate of just 6mm to then, it hadn’t been any better than the pace of hiring before COVID – and that wasn’t good.

June and July, on the other hand, HI has increased but in the same way as it had for a few months of 2020. As the final holdouts of corona lockdowns let up, the end-stage of Reopening #2 unfolded and it was the same shape as Reopening #1 if less strident (not surprising). 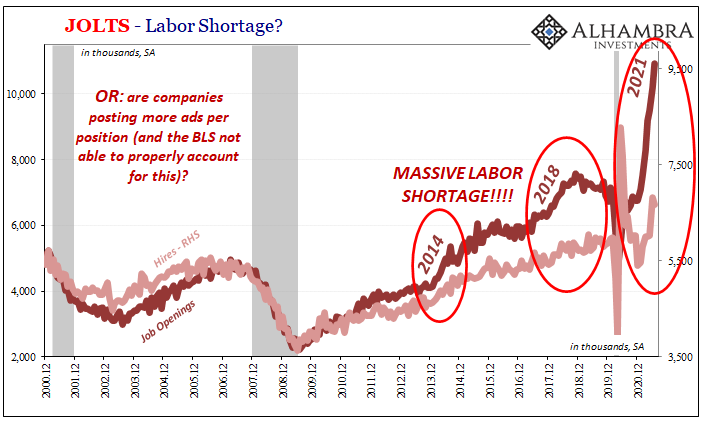 When we examine the full slate of JOLTS turnover, from HI to quits and layoffs, the net of these predictably falls mostly in line of Establishment Survey payrolls (up to July). If anything, the bump in the hiring rate during June, along with lower layoffs, suggested the gain back in employment was even better for that month than the Establishment Survey put it.

But for August and its big “disappointment”, it’s been jobless claims rather than JOLTS (since we don’t have August data) which tracked and then predicted the miss. This wouldn’t suggest a labor shortage as much as it still does a potential slowdown for other reasons (including, possibly, more COVID-related scaring of these same already cautious employers). 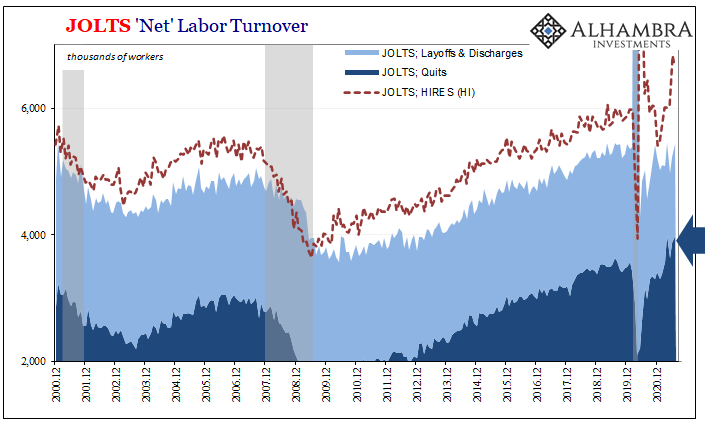 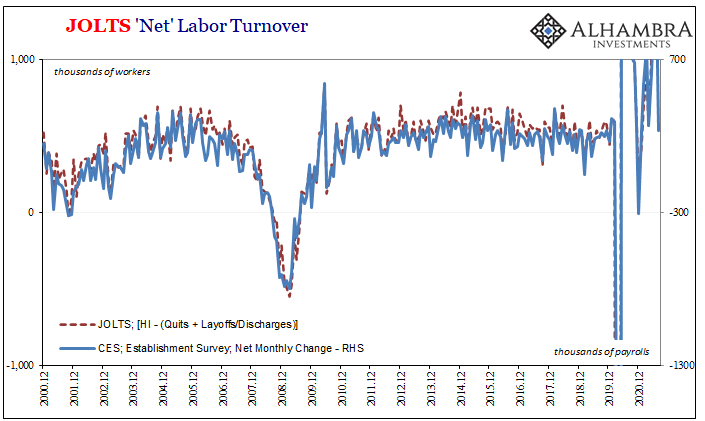 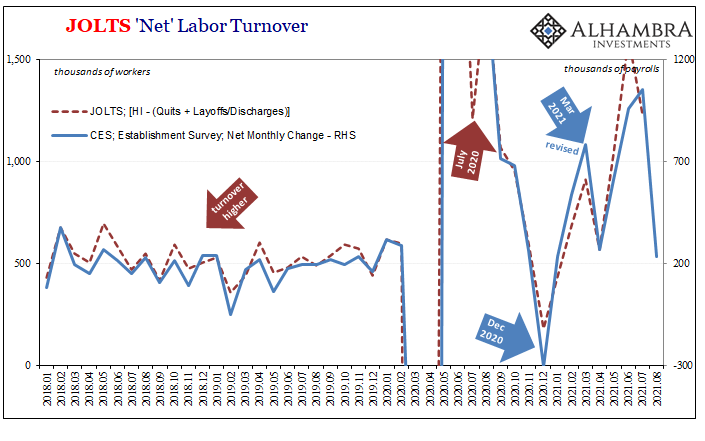 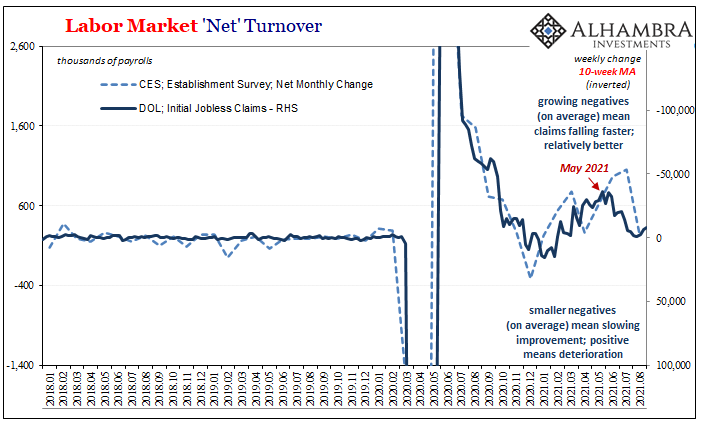 In my view, the BLS JO data is simply incapable of addressing its own increasingly obvious increasing statistical problems. There is an underlying fault somewhere in the collection, which has skewed what’s supposed to be a reliable measure of labor demand by amplifying reflationary improvements of it; that’s why, I’m fairly certain, 2014 like 2018 and now 2021 exhibit the exact same tendencies not corroborated anywhere else.

Even the unemployment rate can’t help but cringe at JO’s recent spike.

The most reliable indication of labor demand, however, is simply the price for labor. There’s no need, never a need, to get creative in order to “lure” potential employees – just pay them what they want. And if you can’t pay them what they want (see: JOLTS Quits; above as well as here), that’s not a labor shortage in any macro sense. It is, like 2014 and 2018, a fake boom with a few fake and misleading numbers.

In a real boom, no rational tycoon is going to be held back from expansion by continuing to offer less than a market rate for the labor needed to go after opportunity. The more certain the opportunity, the less attention any employer will pay to what’s being paid for workers.

A business owner operating during a fake boom can and likely will post more and more online advertisements for low-paying work they can never seem to fill and do so repeatedly while each time complaining to their Fed contact or the news media about their struggle with an indolent workforce which refuses to engage for the next-to-nothing the company is only ever offering.

JO is supposed to filter out repetition in its data, but the fact that this magnification to JO keeps repeating belies the labor shortage interpretation to instead impeach the data itself – just like the unemployment rate.

Again, there’s a legit labor shortage somewhere right now just like there always is on a micro scale. This just doesn’t mean nearly as much as it has been repeatedly made to seem for the last several years. This other is wishful thinking on the part of a narrative which lacks broad evidence in every sense, as much as common sense.