Getting Giddy About Taper

Getting Giddy About Taper

As another central bank, the Federal Reserve, seriously contemplates tapering its latest QE, its policymaking members would do well to consider the several others who either did or thought they should. One of them, obviously, the same Fed but back in 2013. Another was the Bank of Japan early in 2018.

It was March that year and “monetary” officials gathering around Governor Haruhiko Kuroda’s confab were, as I wrote at the time, practically “giddy.” QQE may have taken five years to show itself in the form of growth and inflation, but in their collected views this seemed a plausible outcome for the first time; maybe even likely (it was in the econometric models).

Mind you, growth and inflation hadn’t actually happened yet at the point; on the contrary, these Economists (they are all Economists) were extrapolating in a straight line from “globally synchronized growth’s” minor upswell. In other words, they didn’t see anything on the horizon which might spoil the success therefore it was nearly all-clear to taper.

Wouldn’t you believe it, just two months later taper was yanked right off the table. Kuroda’s gang may not have seen anything coming, they never do (see: Dudley, Bill), but “it” came nonetheless. Japan, unbeknownst to pretty much the rest of the world (including most Japanese) actually fell into a “technical” recession by Q3 2018 – yes, just three months after the giddiness. 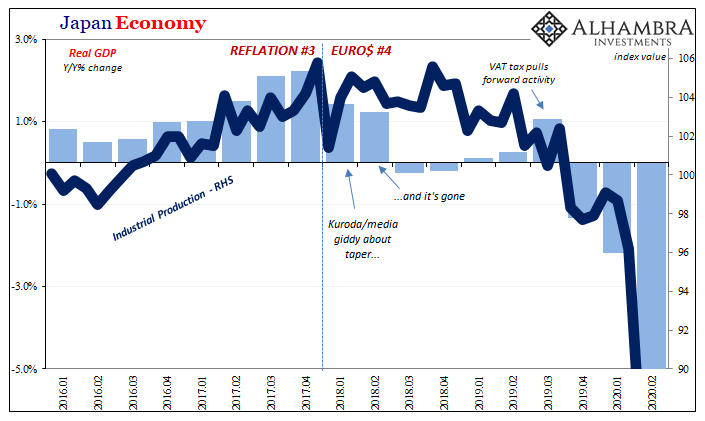 As I wrote in June 2018, with that recession already a forgone conclusion, the Bank of Japan’s “best and brightest” went from the very brink of what would’ve been their ultimate high to positively stumped and seriously alarmed in the eurodollar equivalent of a blink of an eye:

The Bank of Japan gathered its policymaking members in Tokyo at the end of last week. The statements released and the commentary given pursuant to it exuded a renewed darkness. When they had last met on April 26 and 27, things were already different. But the conclave before that, March 8 and 9, they were practically giddy.

What a difference a few months make, not that these Economists have any idea why.

Keep this in mind as Jay’s group moves closer to its taper. And taper itself matters nothing whatsoever, whether Japanese, American, European, etc.; basically, the same mind games to project confidence in “official” forecasts and extrapolations regardless of economic (small “e”) as well as monetary facts in every situation.

There were any number of warning signs from late in 2017 which had, you know, warned them prior to the “unexpected” recession to reconsider these more optimistic predictions; how globally synchronized growth was little more than a pipedream, never more substantial than a bumper sticker slogan. 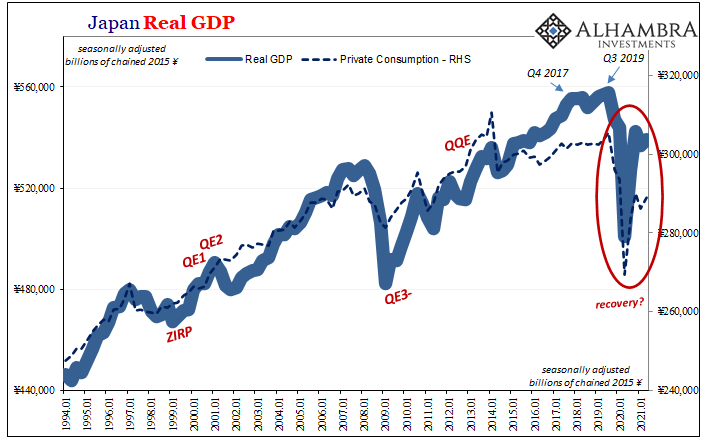 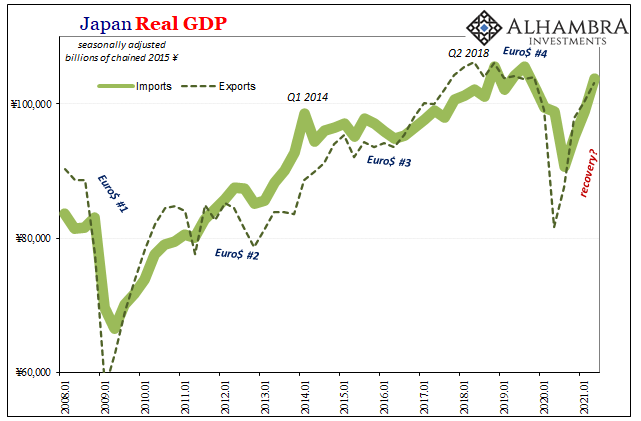 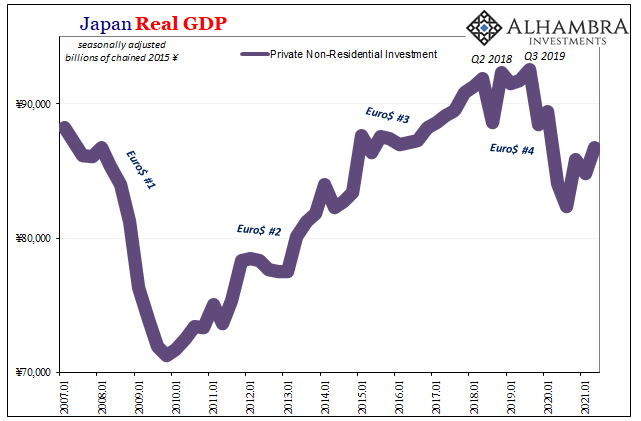 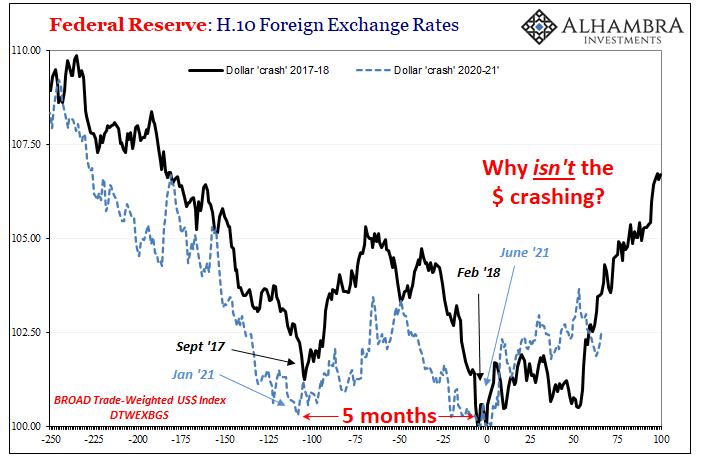 Japan’s Cabinet Office reported last week that real GDP in Q2 2021 only partly rebounded (+0.47% q/q) from Q1’s further decline (-1.06% q/q), disappointing expectations with total estimated real output still more than 1% less than the final quarter of last year. In other words, the entire first half of 2021 has been a spectacular flop (in the same way, it needs to be said, that the first half of 2018 had been).

Is it really just pandemic related? Or are mainstream forecasts whistling past the graveyard of deeper, more structural weaknesses and the alarms these set off if only to be ignored each and every time?

Here’s the thing; Japan’s problems are not unique to Japan, just like they weren’t in 2018 (or 2019). And while its easy to chalk it all up to rampant disease you have to see this synchronized disappointment as potentially much more than that. 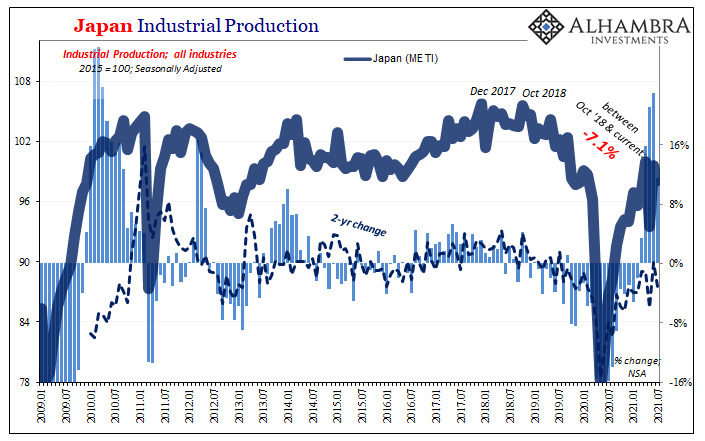 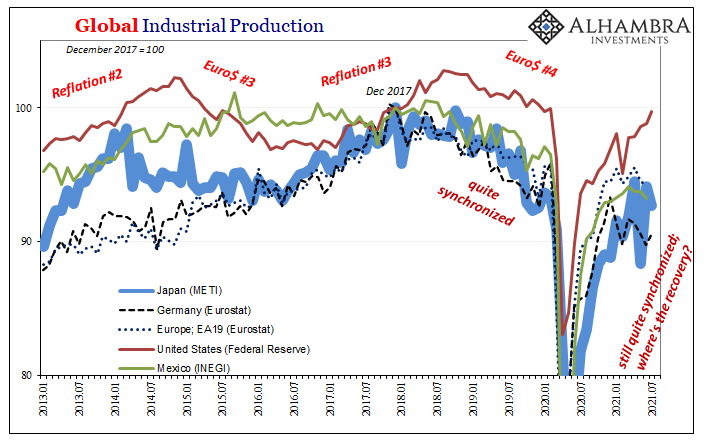 Thus, why that big French freightliner’s announcement last week should be plastered all over the internet as it is likely more meaningful (certainly more real) than every single taper projection batted around in the mainstream presses. What CMA CGM is indicating has as much to do with global demand potential going forward and how we may have already seen the best of it.

And it didn’t get close to recovery.

Despite the US goods frenzy funded by the US feds (not the Fed), production levels have not recovered. Not in Japan, Mexico, Europe, even the United States. Not just below February 2020, way, way less than when Kuroda was last so near his happiest.

This lack of recovery still only pushed shipping rates sky high because of inelasticity in supply.

But if shippers are now seeing things differently going ahead, beginning to adjust prices, with production levels still repressed, what must they be thinking about what’s really been depressing those levels this year? Delta COVID has already peaked and has turned down in much of the world.

Might the same be true of global demand no matter how counterintuitive to the narrative?

If there is a small difference between Powell’s possible taper and Kuroda’s hypothetical a few years back, it’s only that Jay hasn’t yet been, and probably won’t be, very giddy about it. That’s just personality rather than more data and evidence. They both extrapolate if the one emotionless.

Their ultimate chances, though, more and more they seem about the same. 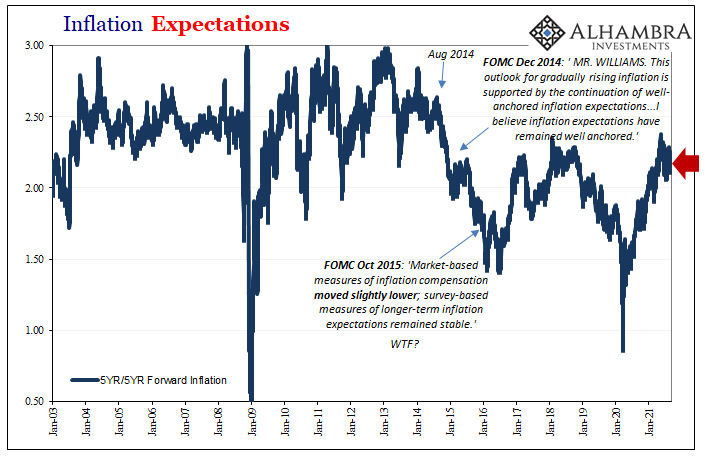