Some Next Steps To Watch For Scarce Collateral

Some Next Steps To Watch For Scarce Collateral

It gets even more interesting in the bill market, not that anything here has been unexpected. And since this is the same week as Evergrande, still no hint of spillover and tightening, at least not beyond what has become typical.

That means mostly on the supply side. Treasury Secretary Yellen is losing breathing room fast, meaning she’s forced to dig further into what’s on weekly offer. For instance, the last 4-week auction – conducted yesterday – only sold $10 billion when compared to $40 billion put out in mid-August.

It’s less severe for the 8-week tenor, though down substantially, too. At yesterday’s sale, $25 billion were let compared to $35 billion six auctions ago. 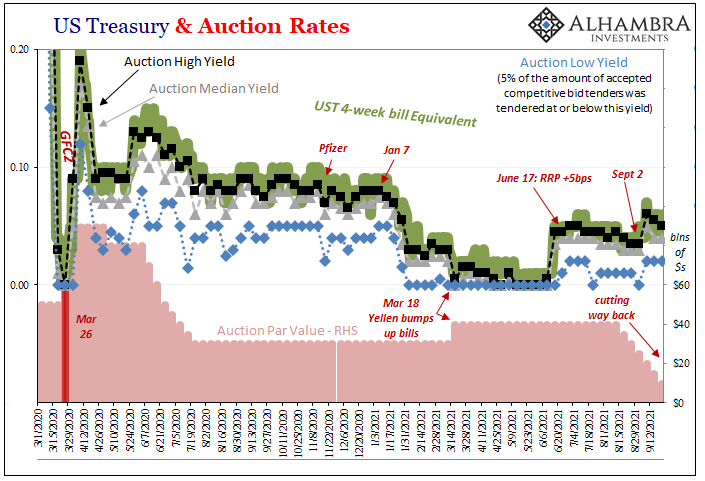 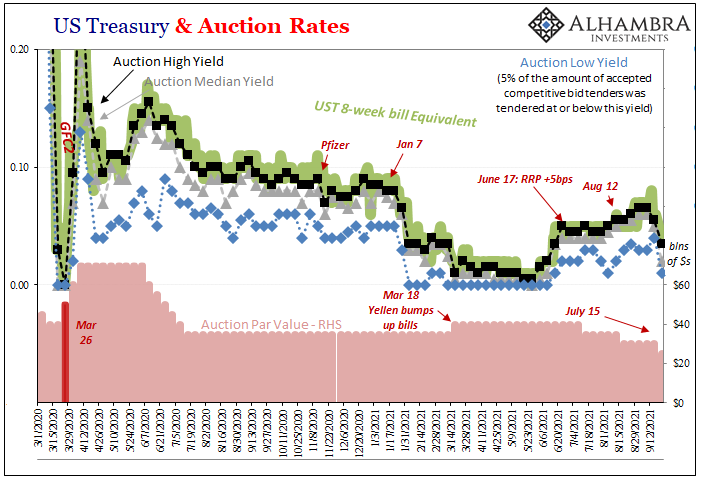 Supply is becoming so strained that even recent and certainly ongoing money market fund abeyance of these issues has been totally overwhelmed by other demand for them. In other words, bill yields (both secondary and primary market) had been rising a touch for the 4- and 8-week numbers consistent with what MMF’s do out of an overabundance of caution with looming unsettled debt ceilings.

This time, however, over the past few weeks there’s been so few bills auctioned that, especially this week, primary pricing has skyrocketed in each term – pushing the 8-week yields down well below the RRP rate of five. The high in yesterday’s just 3.5 bps, meaning serious scrambling for scarce issues to the point of paying substantial premiums (otherwise unnecessary, if the only consideration was investment return). 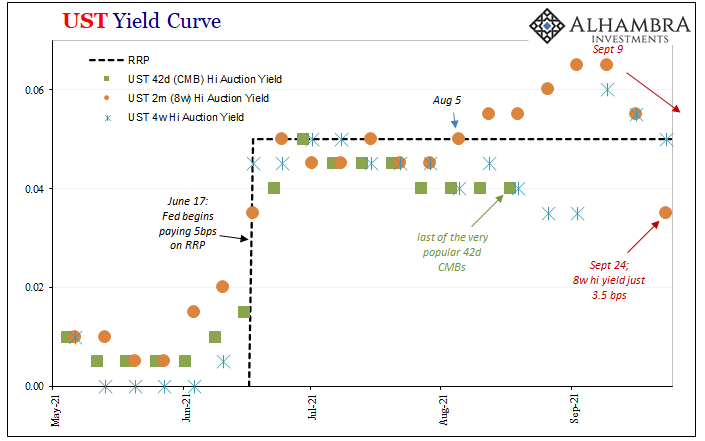 Why not just “lend” cash to the Fed at 5 bps rather than lock up 8-week at 3.5 and less? The answer, as always, collateral scarcity; there’s operational value to these instruments beyond return characteristics.

Despite all this interesting behavior, there’s yet no sign of imminent danger. Rather, it’s mostly the same kind of indicated fragility which leaves the system vulnerable should something spark over the coming weeks (like in October 2018 leading to the landmine).

Outside of more outrageous price behavior in the secondary as well as primary markets, or like 2018 when LT yields menacingly depart their usual post-August upward yield drift, we can also take account of some accounts with the Federal Reserve. To start with, some T-bill issues are available for “rent” via the central bank securities lending program.

This is not a preferable option for various reasons (we won’t get into here), so if there’s any substantial increase here it would be a clear warning. As of today’s data, nobody really wants much of the Federal Reserve’s holdings of Treasury bills. The only substantial demand was for the bill coming due on December 23, and even then just $1.054 billion was rented.

Other than securities lending, if things get seriously rough, so rough the Federal Reserve can’t help but notice this bill shortage and its consequences, the next thing might instead be scaling back their QE reinvestments. There is, as I have shouted as much as I could over the last couple years, precedence for this.

…beginning the very next week, March 25, the Fed bought a pittance more in bills and the level of them in SOMA has been absolutely constant ever since. Put another way, at the height of the crisis, when OTR collateral was so obviously missing that even the Fed had to notice, that’s when Powell took his SOMA hands off the best of the best collateral. Mere coincidence?

It’s more than a little weird; the SOMA stats are damning.

They remain just as damning. Up to this week, the Fed’s holdings of Treasury bills are exactly the same again: $326.044 billion for the 79th week in a row, all dating back to that crisis week last March. That’s not a coincidence, just a fact no one at the Fed wants the public to investigate or even think too much about. 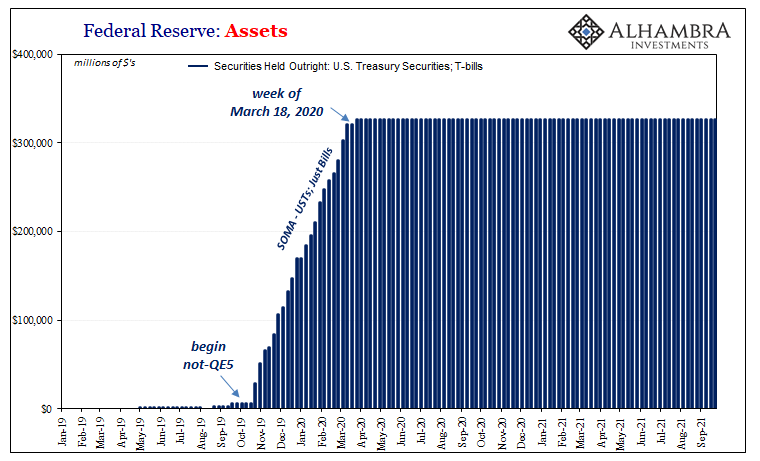 Should they decide to change things up with QE and bills, the Fed wouldn’t even have to taper, just – as the FOMC did last year – adjust the proportion of instruments being purchased; the overall pace of total UST purchases could be left constant, only, if it comes to this, rather than reinvesting expiring bills as they’ve done for 79 weeks already, the Fed might remove itself from all further bills moving forward.

Thus, like late March 2020, leaving a bit more for the market. It may not make up for falling supply, and I doubt it would, especially if supply-drive scarcity is further amplified by dealer aversion meaning a declining collateral multiplier (smaller reuse rate). This last part is what’s missing; dealers expanding that to make up for lower supplies.

Of course, we’re not looking for these central bankers to fix the collateral problem. Rather, if the Fed does stop reinvesting its bill proceeds then what that would indicate is how FRBNY technicians have to be aware of just how much of a problem bill scarcity must have become. Not a solution to it, a clear signal of escalating pressures.

If even the Fed has to do something, that’s never a good sign.

We obviously didn’t need such a signal by the second and third weeks of March 2020. And I’m not expecting something in October to match that level of chaos. But if the Fed is forced to take account of collateral shortages to the point of altering its QE mix before ever reaching the expected November taper, this would be an unwelcome sign of escalating problems.

As it is already, the FOMC has doubled the counterparty limit (now $160 billion a day) at its RRP window which is one small indication policymakers are aware of the generalities behind these same issues. They don’t really factor collateral, of course, focused wrongly and entirely on bank reserves, yet there are times when despite all ignorant effort they can’t just look the other way like they’d wish. 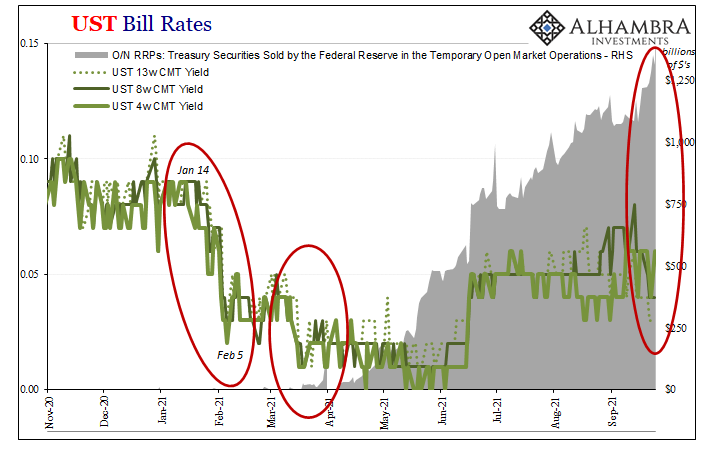