Central banks and their staffs have long been accused of trying to hide inflation. This allegation had been a staple of their critics, those charging reckless monetary policies for creating “too much” money that had allegedly been causing price imbalances all over the financial map. The most famous example the Federal Reserve discontinuing M3 early in 2006 – just as the US housing bubble was reaching its most insane proportions.

While it was never the case in the pre-crisis era (especially with M3; central banks weren’t hiding anything, on the contrary they were admitting they couldn’t keep tabs on the shadow monetary system), it has been open and shut thereafter. What I mean is, in the post-2008 period central bankers are desperate to show that their huge “monetary” policies are effective.

They now want inflation, the more the better, and have been trying to get it for more than a decade. Rather than hiding, they’d prefer to cheat in the other direction if they could.

How unfortunate, therefore, for those at the central bank in Japan. Worse off than its peers, the Bank of Japan has been trying to boost consumer prices going back more than thirty years. Having first experimented with QE, BoJ has since thrown every form and scale of LSAP at the problem thus far to no avail.

Over the last year, with economic conditions that much more threatening, Japan’s central bank upped its latest QE’s (25 & 26, by my unofficial count) to the most ridiculous asset purchase pace of all. The purpose was to restart the already-recession Japanese economy being hit even harder by COVID; get some inflationary pressures pumped into it to begin the reflation process.

A year and a half later, BoJ has added yet another ¥142 trillion in assets (through August 2021), yet consumer price behavior still registers outright deflation thanks to the government’s pre-planned transition from base 2015 consumer buckets to the current base 2020. The old index at least had consumer prices back on the plus side whereas the updated stats have gone further in the wrong direction in the latest update. 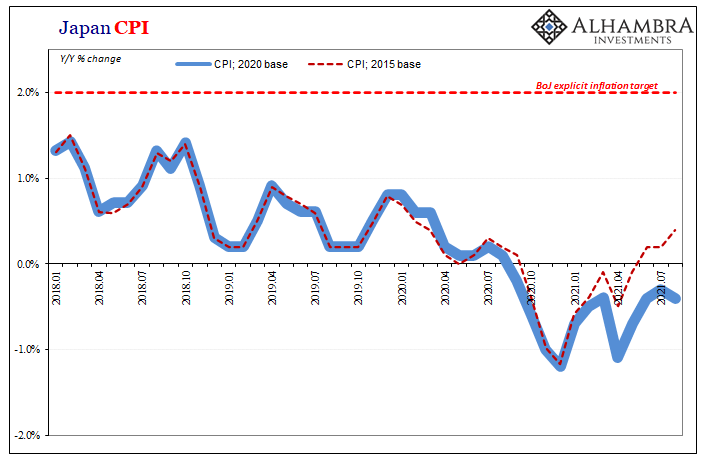 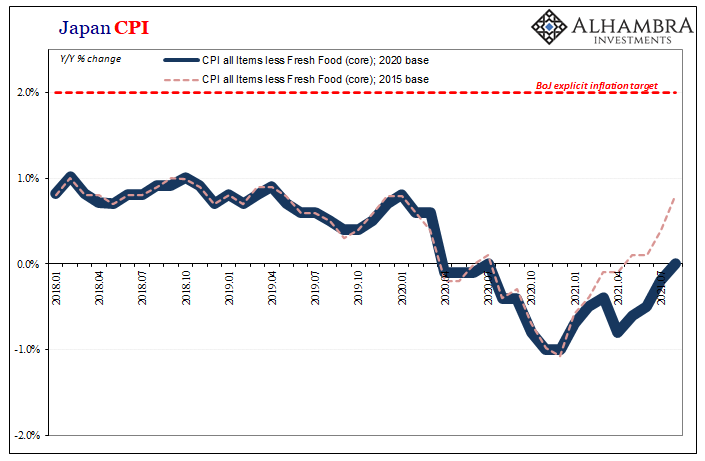 What they wouldn’t give to go back to the old index, though this would be too obvious for one of Haruhiko Kuroda’s final act requesting the government scratch the 2020 benchmark. It would, though, set the record straight about in which direction consumer prices have been “hidden” and then point out some reasons why (if you have to cheat to get some positive numbers, no useful can have been printed).

The most so far is the core rate – meaning CPI less fresh food – for August 2021, and it was zero; average prices thought to be exactly the same as in August 2020.

Some tiny amount of progress back toward the plus side hardly represents the successes of ¥142 trillion in new “money printing”; especially as the headline CPI rate dropped 0.5% year-over-year, while the other core rate which takes out both food and energy was also down 0.5%. 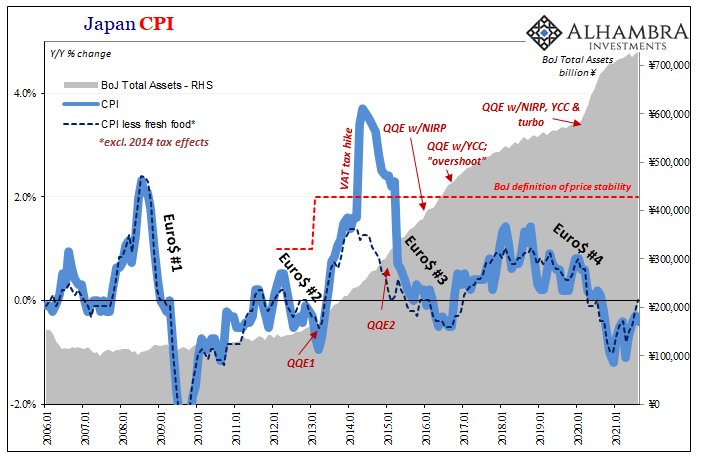 So, “it” is not about the Bank of Japan nor some roaring Japanese comeback. The “it” I am referring to means bond yields, including JGB’s. Not surprisingly, despite ongoing and continued outright deflation along with suspiciously little of economic recovery there, JGB yields have come up from very nearly having signaled much worse just over a month ago.

The recent bottom for the JGB curve was so close to that serious zero line for the 10-year maturity – on August 4, less than 1 bps in yield though not quite all the way down to nothing. Ever since, Japanese rates have ticked modestly upward; the JGB curve slightly steeper while doing so.

If August 4 sounds weirdly familiar, that’s because it was the same day for the same thing in UST yields. 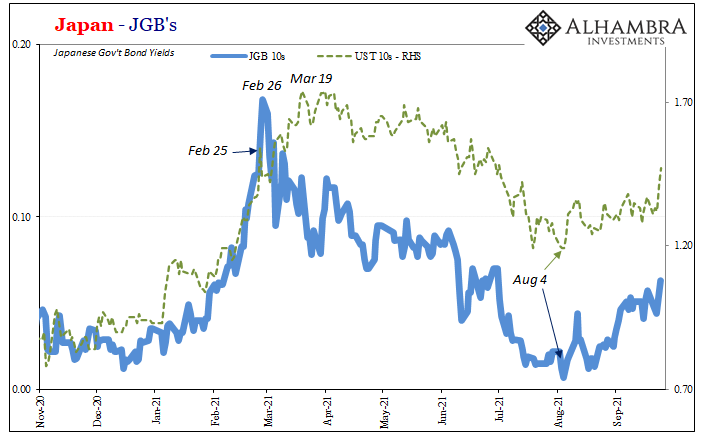 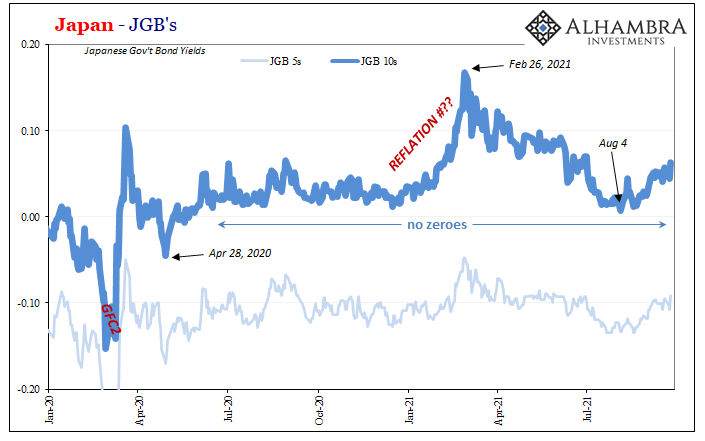 This can only mean the global bond market has turned around in near-lockstep fashion in the same if opposite way from when it had confounded reflation trading late in February. With JGB 10s having avoided any negatives along the way, never triggering that specific alarm, was this just a close call? Powell’s taper all clear?

While that’s a possibility, nothing is impossible, more likely is how it’s just Autumn again. Nothing ever goes in a straight line.

The best example of this may be late in 2017. On September 8, 2017, these JGB 10s would actually puncture the zero lower bound if only on that one single day. This was in the wake of some fireworks in other global eurodollar indications (upset in T-bills, CNY-HKD etc.) a few days before.

And though global yields would quickly resume their usual upward Autumn, the die had been cast, so to speak, on what would eventually become Euro$ #4 amply hidden in terms of global yields going upward overall. The short run experience at and near zero for those 10s was an indication about timing and fragility – the underlying eurodollar pressure was real though not quite yet obvious and serious enough. 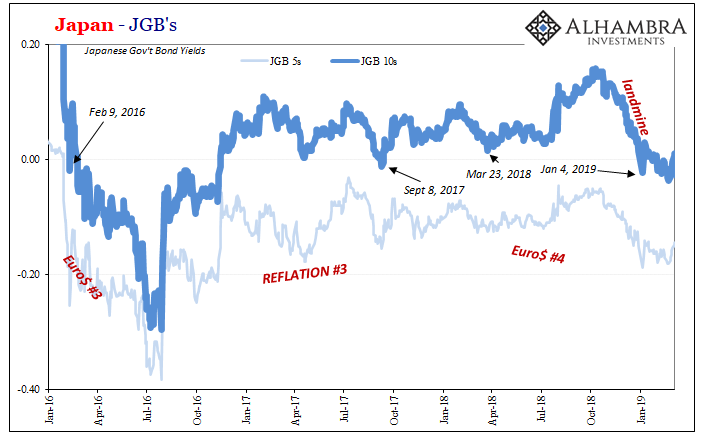 The global system had begun to roll over, though closer to the beginning of that turn than full inflection.

As noted here, there has been and still is quite a lot that’s the same about Autumn 2021 which reminds me of Autumn 2017 including JGB 10s. Had they gone under the zero line before early August, that would’ve suggested a condensed rolling over process. Now that this has been avoided, for now, it’s more likely like previous periods.

There was no growth part, just globally synchronized.

This remains the case today. The JGB 10s didn’t quite reach zero during the mid-2021 slump, but the fact they got close, and Japan’s CPI can’t get out of its own way, already suggests too much still the same. Yields may be rising globally, but if that’s only Autumn then JGB isn’t yet out of range of zero, meaning quite a lot more than that.