How often do you check your brokerage account? There is a famous economics paper from 1997, written by some of the giants in behavioral finance (Thaler, Kahnemann, Tversky & Schwartz), that tested what is known as myopic loss aversion. What they found was that investors who check their performance less frequently are more willing to take risk and experience higher returns. Investors who check their results frequently take less risk and perform worse. And that makes a lot of sense if you think about it. If you check the stock market every day, the odds of seeing a negative result are fairly high. There are more up days than down but the difference isn’t that great, say 53% up and 47% down. If you back out to monthly, you see positive returns 63% of the time, quarterly 69%, and yearly 74%. The more frequently you check the more often you see a negative result and that matters because a loss has a greater emotional impact than a gain. The emotional reaction to the pain of loss is to stop the pain – sell. And when the pain passes it is difficult, nearly impossible, to reverse the decision because you are now emotionally invested in that position. It is hard to admit when you are wrong and so you sit and wait for the market to validate your previous action. If it doesn’t, you find yourself months or years down the road wondering how you got here.

I don’t think there is much reason for the average investor to look at their account more than once a quarter. Obviously, I have to because it is my job, but I’ve learned over nearly 40 years in the market to not pay too much attention to what happens on a day-to-day basis. And that applies not just to market returns but also to economic data and all the other things investors fret about so regularly. I have said this many times in the past but it bears repeating; most of the market “data” everyone obsesses about is just noise, especially when it comes to economic data, which in its initial release is barely more than a guess. And a lot of what passes for data is nothing of the sort. The ISM survey, for example, is, as its name suggests, a survey, an amalgamation of purchasing managers’ beliefs about how their businesses are doing. In other words, it is anecdotal and subject to all kinds of human biases. It isn’t worthless but it sure isn’t hard data.

There were some markets that had bigger moves but they weren’t things that a lot of investors could or would own. Natural gas, for instance, was up 62% in the quarter. But if you tried to capture that by owning an energy sector ETF, you lost money. There aren’t a lot of pure plays on natural gas in the stock market (although there are a couple of decent ETFs for nat gas). Commodities were generally higher in the quarter, the CRB index up 7.3% but that didn’t help EM stocks, which finished the quarter down 8.6%. Latin American stocks were down 15.8% and China lost 18.1%. Japan was an exception among developed markets, up 2.3% on the Nikkei. So, yes there were some individual markets that moved significantly but the major asset classes that most investors own were essentially unchanged. You could have safely ignored your portfolio and all the economic data for the last three months and not missed a thing.

The same could be said about the state of the global economy. It did slow slightly but you have to squint to see it and it may be over already. The supposed culprit was the delta variant of COVID and I suppose that is as good an explanation as any. But it really doesn’t matter much since the change was almost imperceptible. We don’t have a lot of the September data yet but looking at the last three months through August shows little change. The latest weekly jobless claims were 6,000 less than 3 months ago. The unemployment rate fell from 5.8% to 5.2%.  Non-farm payrolls are up 1.5% (which actually isn’t bad if it doesn’t get revised away). Housing starts were up 1.3%, permits up 2.7%, and new home sales up 1%. Manufacturing and durable goods new orders were both up about 4% while core capital goods orders were 1.7% higher. Personal consumption was up 1.9%, retail sales up 2.5%, and wholesale sales up 5.1%. Inventory to sales ratios were unchanged. Personal income was up 1.5%. There is nothing there that should alarm us or make us break out the bubbly. The economy in the 3rd quarter continued to grow slightly above trend with the 3-month average of the Chicago Fed National Activity index down from 0.78 to 0.43 but still well above the zero line that represents trend growth.

During this most recent quarter, we saw all kinds of scary headlines about the budget process, the debt ceiling, potential tax increases, China Evergrande, big movements up and down in cryptocurrencies, ridiculous prices paid for NFTs, the spread of the delta variant, warnings about the mu variant, the withdrawal from Afghanistan, the natural gas price spike in Europe, the chip shortage (auto sales did drop nearly 20% so maybe that one is legit), supply chain problems, ships of goods that can’t offload, and the China crackdown on their tech companies. I’m sure there were more but I don’t feel like looking them up. Maybe some of these things are important but most of them aren’t and will be forgotten. But if you spend every day reading the headlines or even worse, scrolling through Twitter, there is every possibility that you will check your brokerage balance and do something you didn’t need to do that ends up being harmful to your long-term financial health. The answer to the question of what should I do to my portfolio today is almost always nothing.

The current economic environment remains the same – falling growth and rising dollar – although the falling growth part of that may need updating soon. I take rate movements at face value. When they were falling from March to July, it was an indication of falling of growth expectations. Rising rates over the last two months are an indication of rising growth expectations. Frankly, neither of the moves was all that large but the trend since last year is pretty obviously up. For now, I’m maintaining the falling growth stance but if rates keep rising that will have to change. Why might growth expectations rise? I don’t know. Maybe delta fades and services spending continues to pick up. Maybe tax hikes are avoided. You rarely know the whys in advance and there is little to be gained from guessing.

The 10-year Treasury yields (nominal and TIPS) provide us with information about the market’s growth and inflation expectations. It isn’t perfect, especially with the Fed so involved in these markets, but it is better than any Wall Street strategist or Twitter genius. What it tells us right now is that growth expectations have fallen somewhat over the last 6 months but may be starting to rise again. The 10-year Treasury yield is down from 1.75% in late March to today’s 1.46%, but that is still more than double the rate of a year ago. 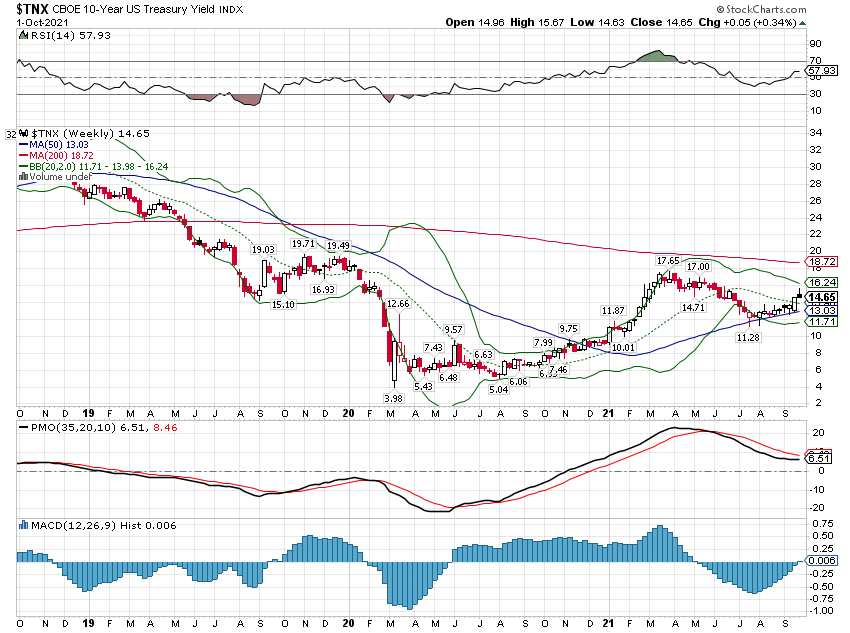 The dollar has been trending higher recently but viewed in perspective, it isn’t all that significant. It has moved up recently but it’s still in the bottom half of the range of the last six+ years. And it should be pointed out that a rising dollar, by itself, is not a bad thing. It is a rapidly rising dollar in the face of slowing growth (particularly when near recession) that causes big problems for investors. We don’t have those conditions right now. The uptrend has been gentle and the growth slowdown is barely detectible and nowhere near recession. I would also point out that dollar strength is what should give everyone confidence that the inflation we see today is likely, um, transitory. Most of what is going on with prices is a result of a demand-side policy response to what was primarily a supply shock. 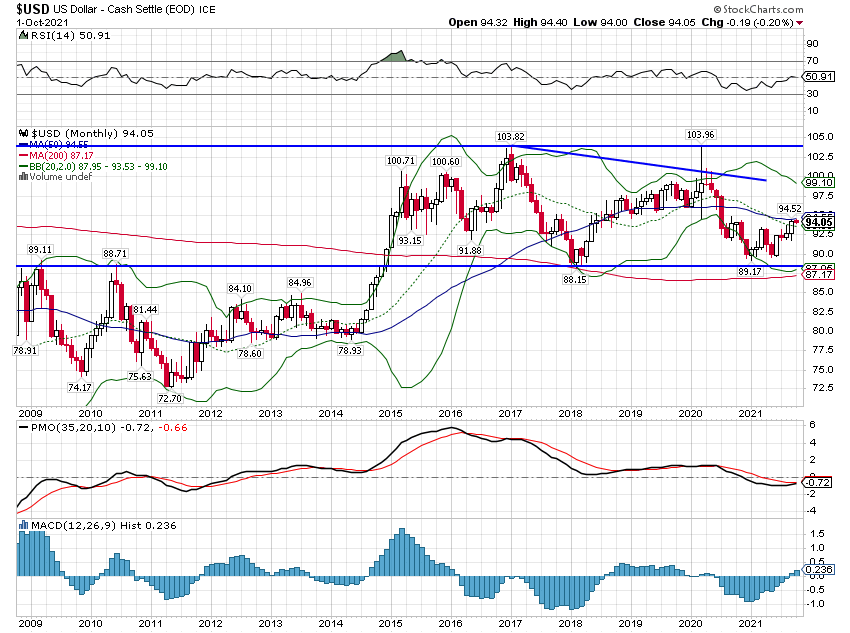 The economic data released last week was generally positive but as always there are some caveats. The two regional surveys, Dallas and Richmond, were not that good with the latter turning negative. But with oil prices rising, I would expect the Dallas survey to improve and Richmond is not exactly manufacturing central. And the Chicago PMI (which includes services by the way) at 64.7 is pretty damn good.

Personal income was up 0.2% with the biggest gains seen in wages and salaries. But real incomes are up just 1.7% over the last year reflecting the impact of inflation. Personal consumption was also higher with spending on services offsetting a drop in auto sales.

Overall, the economic data is about what you’d expect with so little movement in the markets. 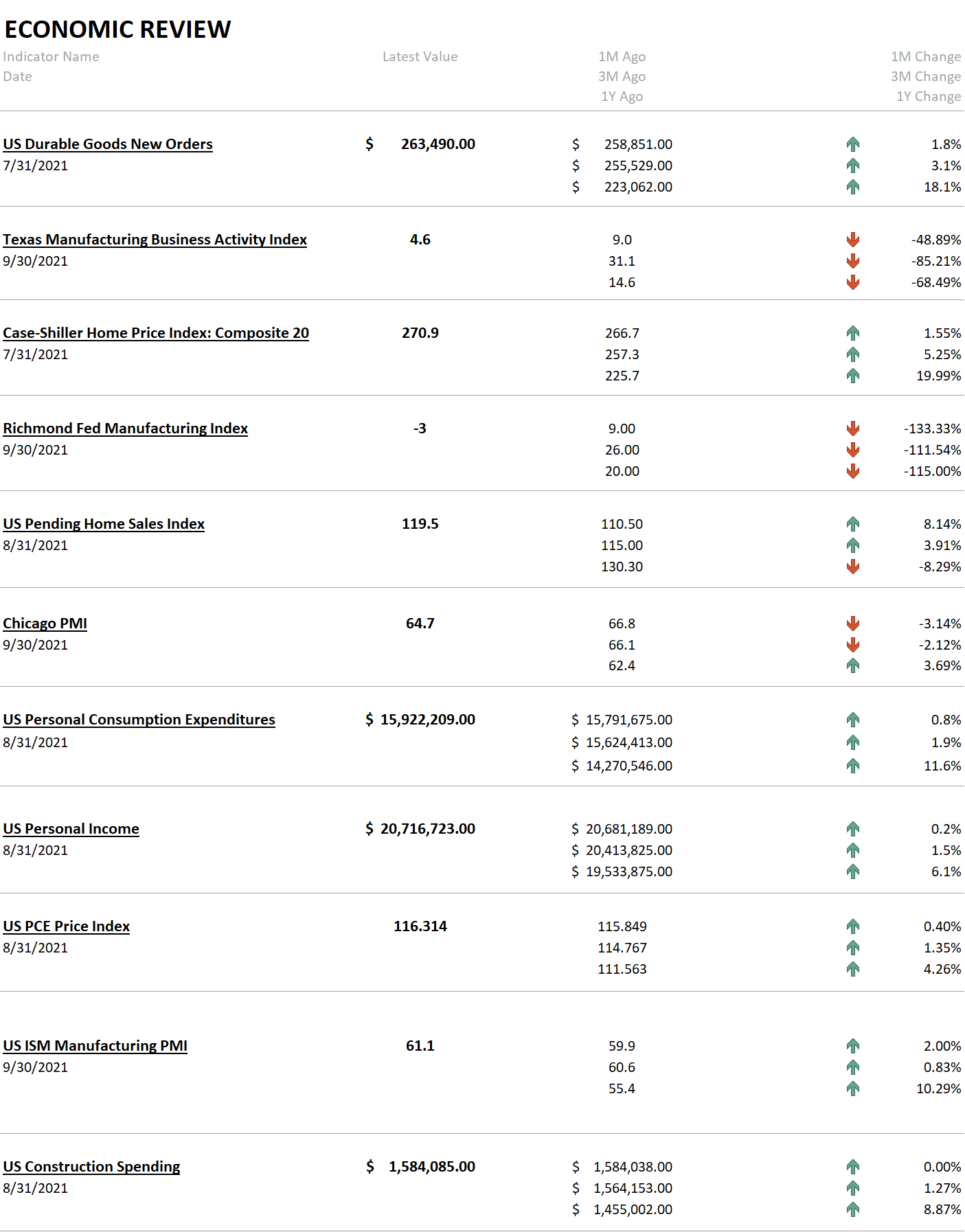 This week we get an update on the labor market and I for one have no idea what to expect. 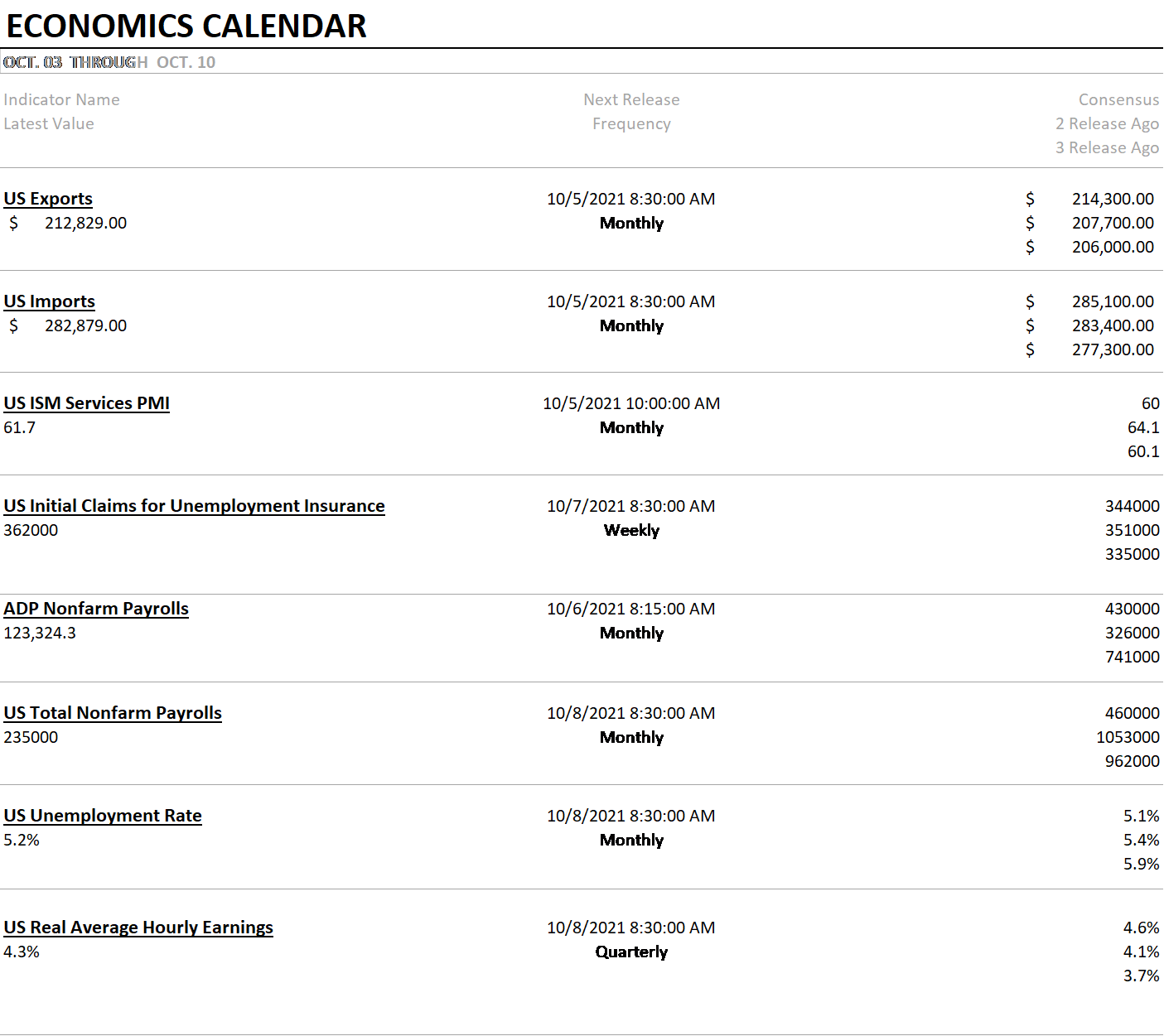 The S&P 500 was down 5% in September and 2.2% just last week. Ironically, more weakness may come if growth expectations and interest rates continue to rise. Large-cap US stocks are expensive and low rates are a big part of that. If rates continue to rise, I’d expect US large-cap stocks – and particularly growth stocks – to continue to correct. As you can see below, they were the big losers last week with value holding up much better and small-cap value actually ending the week higher. Small caps, by the way, have been treading water longer than just the last quarter – the Russell 2000 has made no progress since February. However, current futures market positioning makes me think the trading range will likely be resolved to the upside. Large specs (mostly hedge funds) have a sizable short position.

The most interesting line on the chart below is the one for commodities which continue to rise even in the face of a higher dollar. 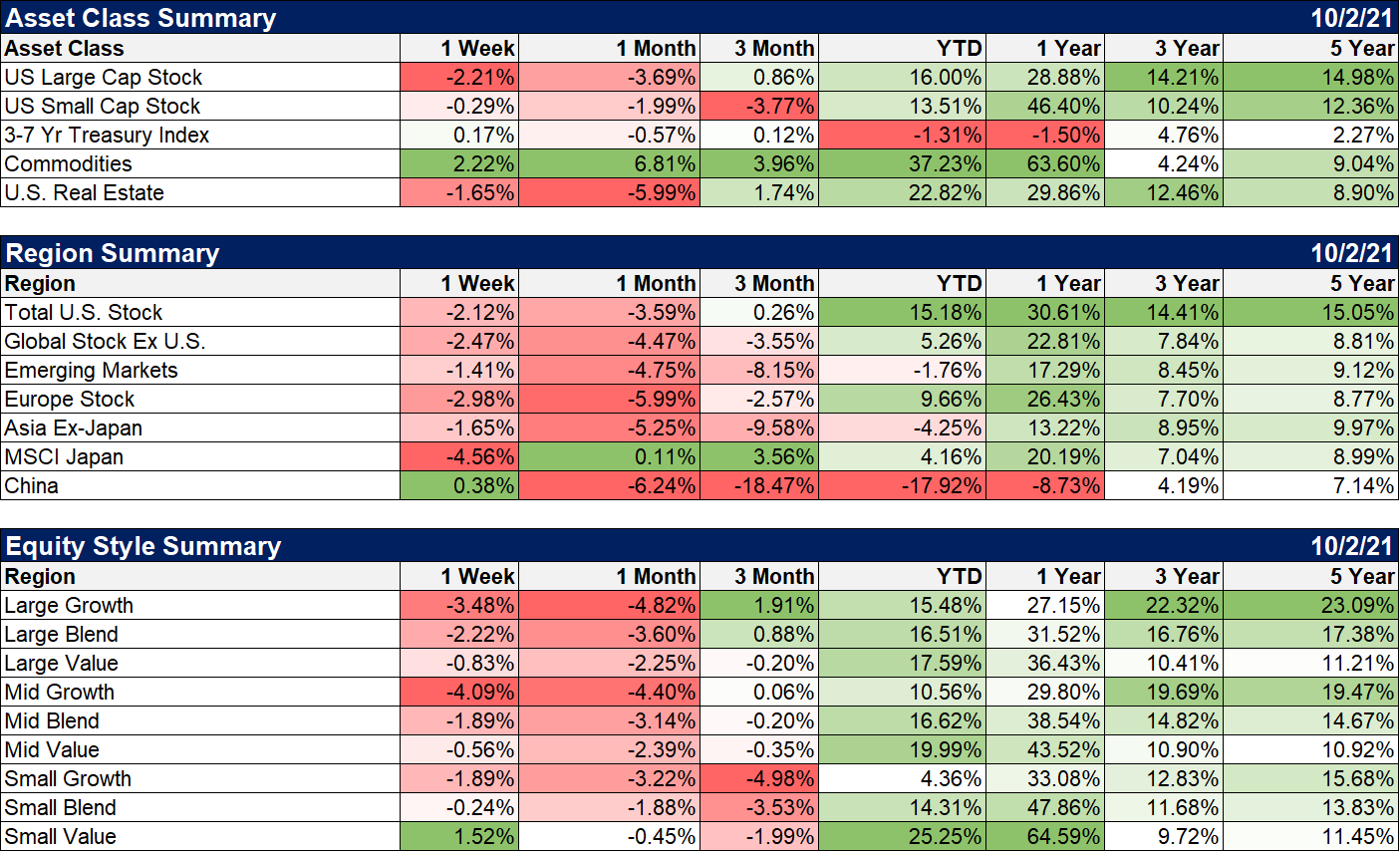 The only sector in the green last week was energy while financials also outperformed but with a small loss. Tech and health care were the worst performing sectors of the week. 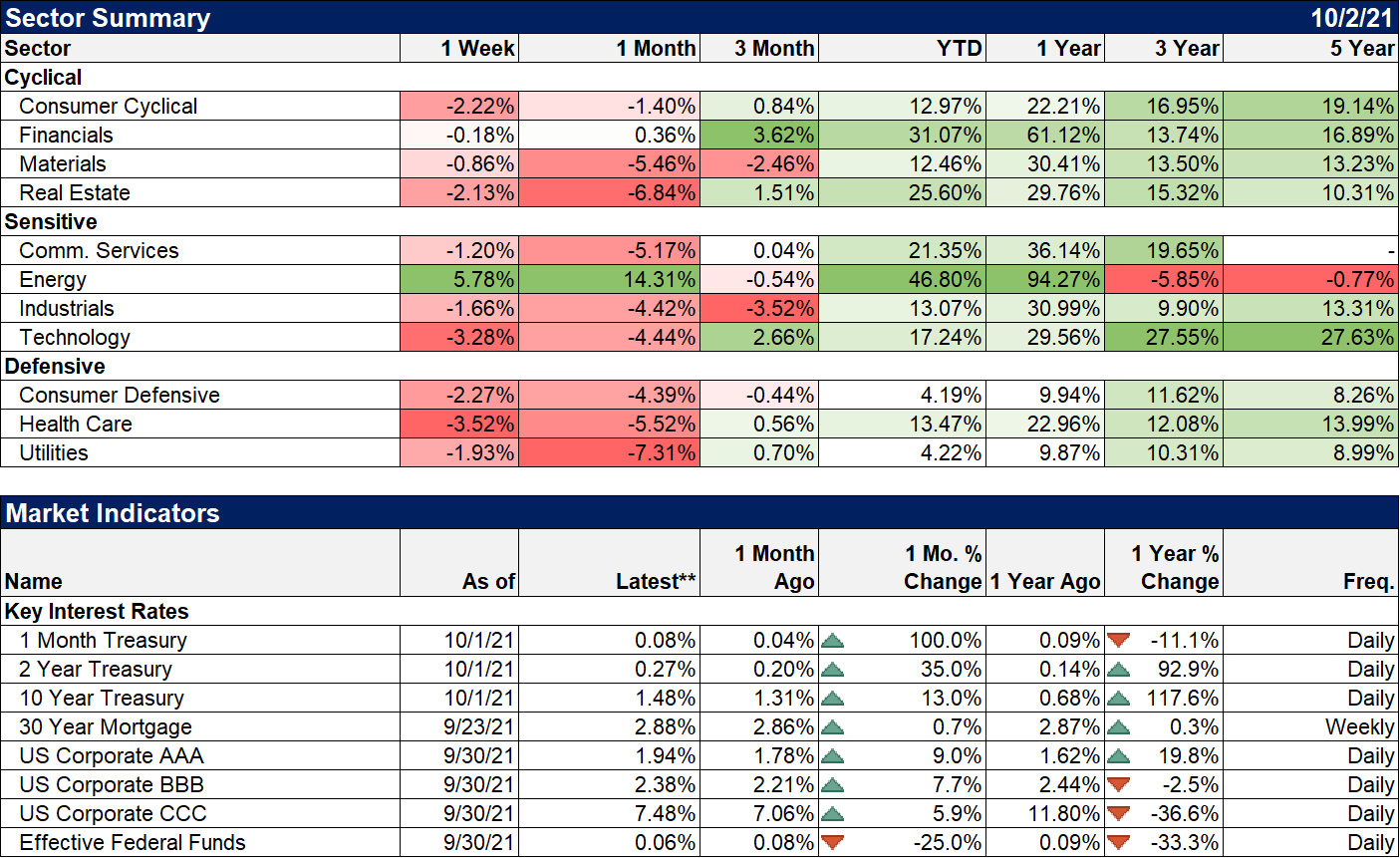 I don’t know what will happen in the next quarter but I doubt it will be as boring as the last. The emerging narrative of the market is the end of the delta variant – and potentially COVID itself – but we don’t know for sure how that will impact the economy. It sure seems logical that things would pick up but there are a lot of factors other than COVID to consider. How will the slowdown in China affect the rest of the world? How will the rise in natural gas prices affect spending as the weather gets colder? Will inflation moderate or will recent rent increases feed a continued rise that spooks consumers and investors? Will the end of extended and enhanced unemployment benefits allow companies to hire the workers they need? Or will they have to keep hiking wages? Even if we could know the impact on the economy, how it will affect markets is hard to predict. Will higher rates mean growth stocks continue to correct? Will higher rates be negative for REITs? Will real rates continue to rise along with nominal rates and if they do what will happen to the dollar? There are always more questions than answers but the market will let you know when something is important.

Uncertainty is the constant companion of investors. We can never know what the future holds. All we can really do is observe the present as clearly as possible and try to ignore the cacophony of the financial press. And for goodness sakes, stop checking your balances.