If Dollar History Is A Guide, More Than A Growth Scare

If Dollar History Is A Guide, More Than A Growth Scare

Forgotten now, overridden by the arrival of the coronavirus, Germany’s economy was already well into recession before COVID. Quite a long time before. It wasn’t an earth-shattering collapse reaching downward to an incredible depth, that became the later effect of overreacting to the pandemic. We will simply never know what that prior contraction would have looked like, and how bad it would’ve gone, had SARS never escaped China.

Oddly enough, it was the Chinese economy which had much to do with that shallow yet prolonged pre-2020 recession. Heavily exposed to it by trade, like Japan the German system goes as the rest of the global economy might. The global economy gets moved by China and how it fares under often self-reinforcing eurodollar conditions.

Working backward, then, tight dollar, bad for China, not good for the global economy which we can practically see from how the German economy is behaving. In the latter case, it had been ZEW sentiment, of all things, which proved very useful in picking apart the inflation/boom narrative unquestioned in any media located on whichever continent.

Even after 2018 was shown to have been a total bust, though not yet recession, the latter would come about anyway and it had been, for Germany, the ZEW on the spot. I wrote the following in August 2019, which proved to have been exactly the case:

Unlike, say, Argentina, you can’t so easily dismiss German struggles as an exclusive product of German factors. One of the most orderly and efficient systems in Europe and all the world, when Germany begins to struggle it raises immediate questions about everywhere else.

This was the scenario increasingly considered over the second half of 2018 and the first few months of 2019; whether or not recession. Over the past few months, however, the question has changed again.

Central bankers and Economists were hoping it would all get resolved favorably, and the public would go back to asking about rate hikes and normalization. A growth scare and nothing more, the inflationary boom temporarily delayed.

Now, contrary to official reassurances, it looks like Germany’s economy may already be in recession.

Yes, it was recession. 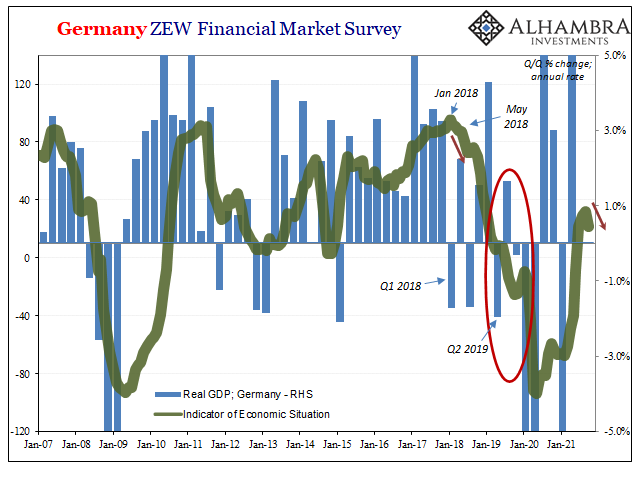 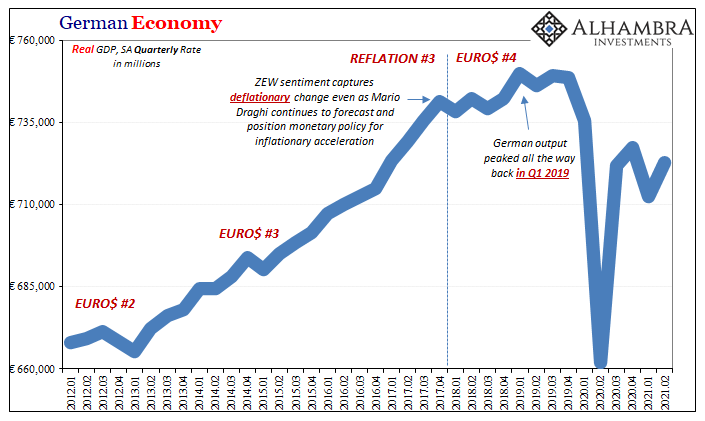 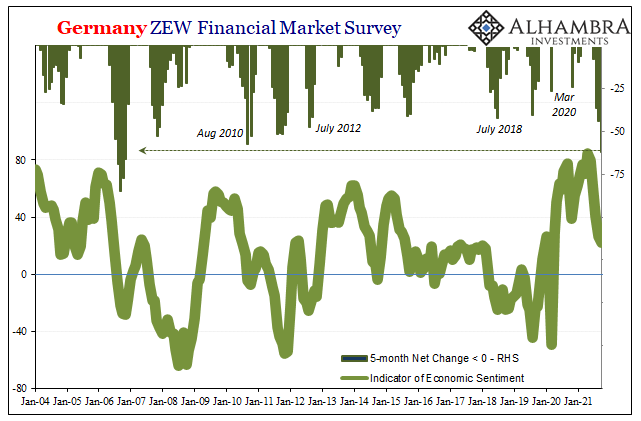 Here we are again with a “growth scare” once more threatening to spoil the rate hikes (tapering first in Europe as well as the Fed’s QE). And it’s showing up like 2018-19 in both Japan, Germany, therefore China and, yes, eurodollar.

Economy-wise, hints of inflection across Japanese data and for German figures just start with the past five months of ZEW. A radical change in direction for sentiment occurred back in May – that same month as always.

For the October 2021 update, released today, it wasn’t just another decline in sentiment (down to just +22.3) there’s first the scale of the reverse (largest 5-month negative change since the eurodollar started to go bust before 2008) and now, for this current month, the situation index dropping by 10 points on its own.

The latter is not a good sign, especially with the effects of delta COVID on the decline. Whereas in 2018 such obvious and visible weakness had been blamed on “trade wars” because no one wanted to admit the world was instead in a troubling not booming shape, already in 2021 aside from the coronavirus you can pick your favorite from a lengthening mainstream list of excuses.

For Europe, there’s a labor shortage, too, along with energy prices, supply bottlenecks, lack of vaccination producing work hesitancy, everything, it seems, except accepting how, like 2018 and 2019, the macro situation might have already turned completely away from booming recovery. 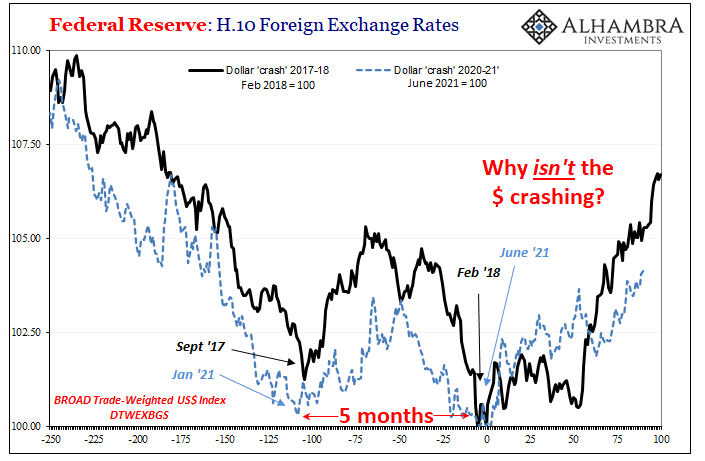 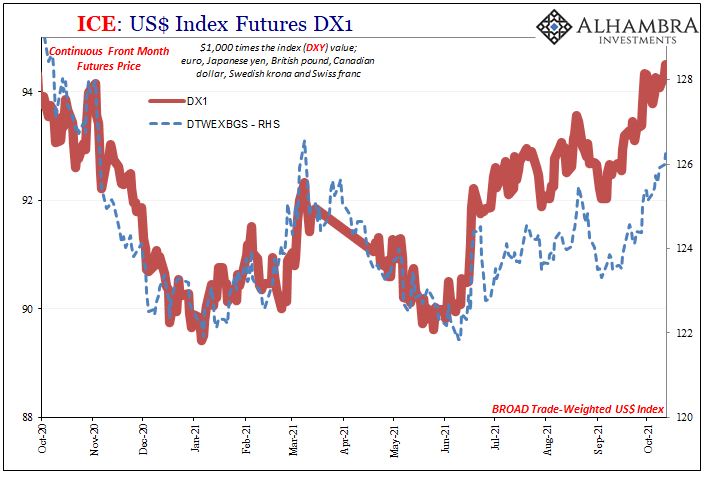 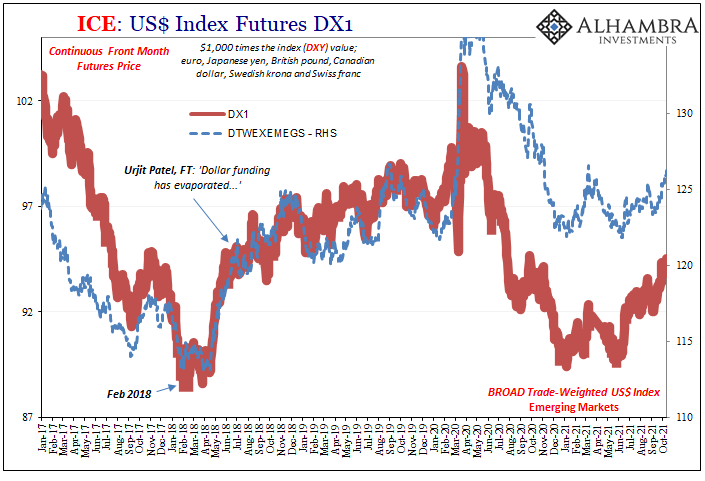 So, as Germany repeats itself along with Japan and China, so, too, does the dollar which continues to rise. As we reviewed just recently, this rising dollar has nothing to do with a “hawkish” Fed, instead more along the lines of “dollar funding has evaporated…”

As I wrote then a few weeks back, “evaporated” is likely too strong a term for October 2021 (and I would argue that it had been for May 2018 when first introduced from India). Certainly “growth scare” potential is upward, as is the dollar indicating global money tightness, yet we’re still missing some key signs and combinations which would leave us with the impression of being closer to “evaporated.”

Chief among what’s missing, slightly higher UST and global bond yields at the moment. For whatever reasons, the bond market is less pessimistic in October than it had been in August (I personally would stop well short of characterizing the current selloff as one of optimism). It may be that markets are looking at taper then rate hikes, perhaps an oversized influence from oil prices (which isn’t unusual at this moment in an inflection), or it may be nothing more than the typical reduction in negativity which dependably shows up at this exact calendar spot every calendar year.

If, perhaps when bond yields fall in tandem with the dollar rising, that would be more like “evaporated” as in landmine 2018.

Altogether: Germany “growth scare” verging toward the more serious implicating an-already questionable China first and eurodollar beyond, along with a rising dollar nearly across-the-board consistent with those but not yet re-falling yields.

One final perspective from China itself; or, at least its currency. Still hardly any movement in CNY closing in on four months of this, which, historically speaking, is likewise considerably closer to “evaporated”, definitely eurodollar impaired, than inflation/recovery/nothing-more-than-a-short-run-growth-scare. 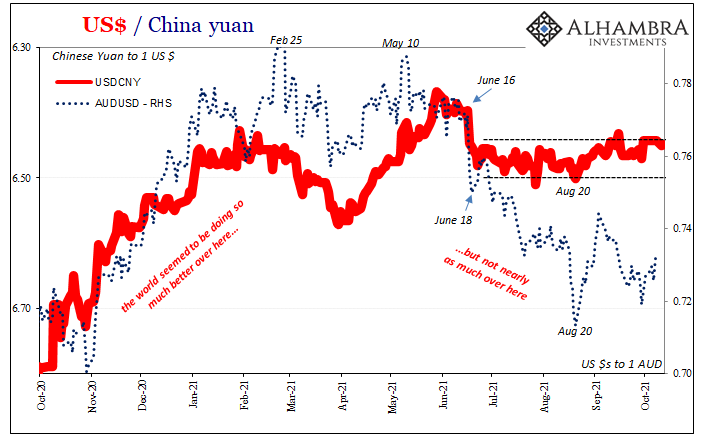