More inflation numbers around the world, more of the same. Producer prices, this time. Beginning in the US, the annual rates remain high and reached a little higher in September 2021.

Commodities have been the highest of all, up 20.47% year-over-year for another greatest increase since the mid-seventies. The PPI for final demand goods was up 11.68%, that the most since the early eighties. Core producer prices gained 6.80%. Each was faster in September than in August. 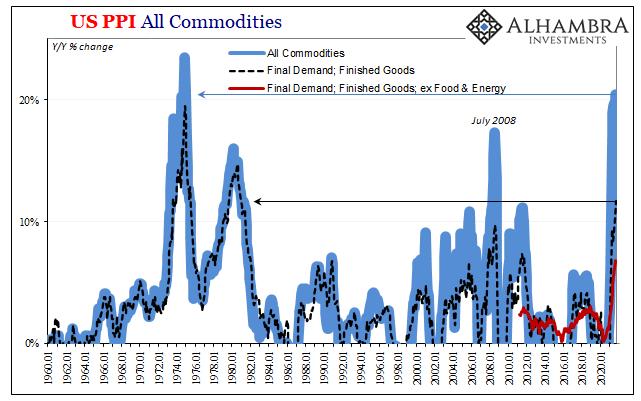 Even still, producer prices are slowing down. Not just showing signs, actively decelerating once you get past base effects as well as the increasingly isolated recent effects from earlier this year.

Take commodities; the PPI index for them, on a rolling 3-month basis, dropped to +3.2% (not annualized) July to September from 3.79% June to August and 7.83% January to March. This most recent three month slice the slowest since last December. 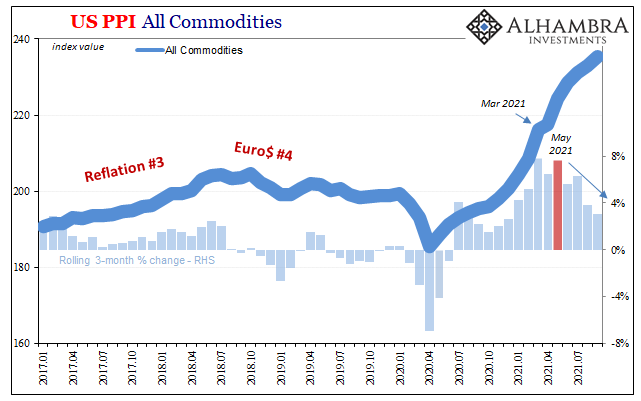 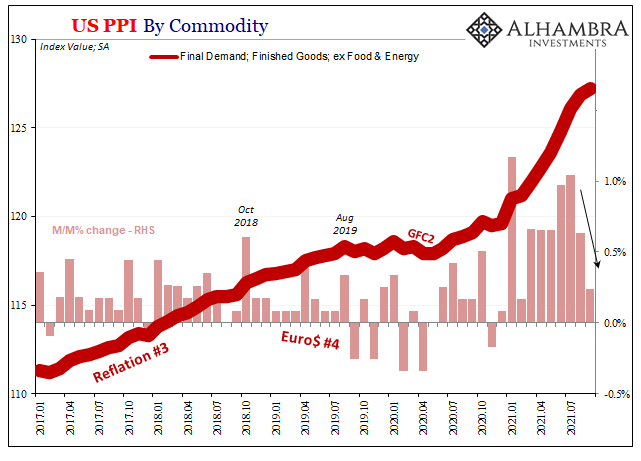 While not nearly as well-defined as recent CPI’s, the single 2021 camel hump in producer prices is becoming more visible anyway. Producer prices are – at times – harder to turn around, less responsive or sensitive to short-run inflections in macro conditions than consumer prices generally perform. It takes some time before businesses squeezed by faster rising producer inputs undertake the negative macro backlash represented by less lasting CPI gains.

Over in China, the same but to an ever greater extreme. Producer prices accelerated in September, too, though consumer prices just stagnated – both in monthly as well as yearly terms.

Try running a business or economy with that disparity. Again. 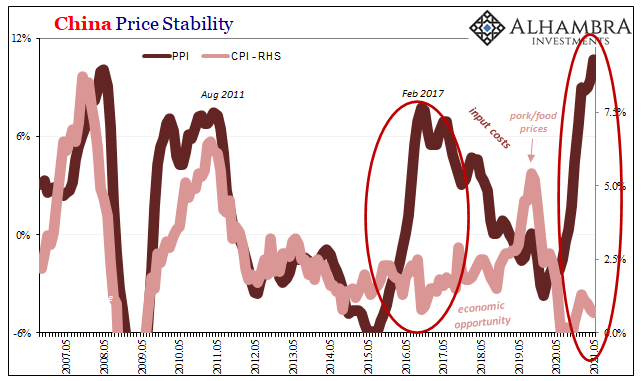 The CPI first gained nothing from August, plain flat, leaving it only 0.7% higher than last September. This was, yet again, among the lowest consumer price increases in Chinese history. While base effects in food particularly pork were the primary reason for the lack of inflation, even without food the CPI gained just 2.0% year-over-year (and +0.2% month-over-month), not significantly different.

But like their American business counterparts, Chinese manufacturers and industry while having a harder time passing along input costs to consumers, broadly speaking, those input costs are still going up. 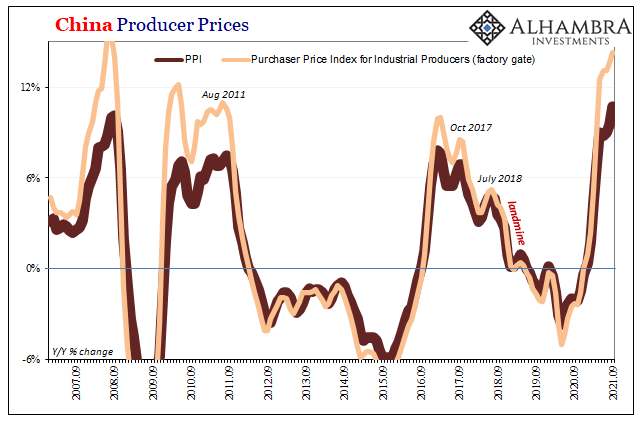 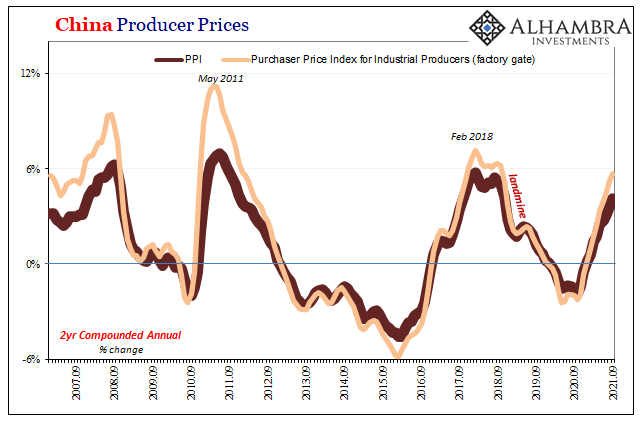 Yet, even those are somewhat misleading, annual jumps that are more base effects than not. The 2-year change for each far less headline-grabbing: PPI +4.1% 2-year compounded; factory gate prices +5.7% 2-year compounded. Neither is any higher than the peak rates from 2018.

Producer prices, as they do, are less restrained, while even so though those in the US are already showing the same signs as consumer prices here have with regard to slowing down. Transitory. Given history and Chinese imbalances, it would be a real surprise if producer prices in China didn’t follow along.

Not just a surprise, it would be the first time.

It’s so often said, and just taken as an article of faith, that given the difference in rates and speeds between producer and consumer prices the latter must eventually be driven upward by the former. It sounds plausible, that businesses whether American or Chinese will have to pass along far higher input costs to consumers, thereby converging CPI’s upward where the PPI’s are. As if there is no other way to resolve this imbalance. 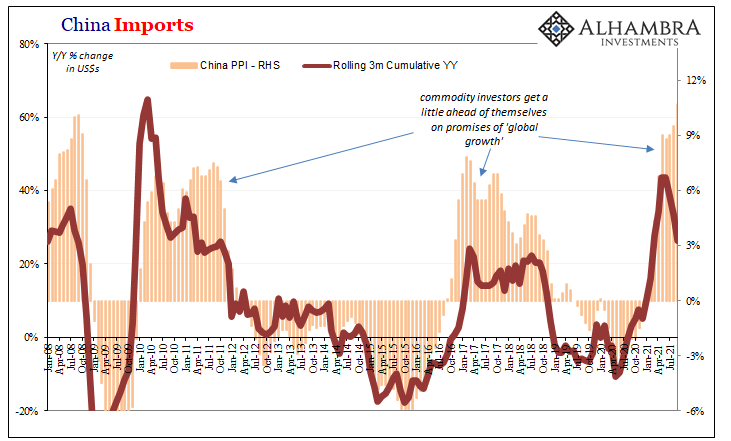 But that’s not how it has worked, especially the post-2008 era (post-2013 China). Time and again, businesses find they can’t pass along consumer prices (apart from, in the US, short run transitory periods) because actual demand/recovery is never really there. Economists, central bankers, media, they all claim it is there, or will be just around the corner, but they continually get it all wrong (starting with the global monetary situation, then their interpretation errors getting larger from there).

Eventually, like the macro economy, all prices revert and converge instead downward (slowing) to the natural state of no recovery; no demand strength.

Again, signs of this already in PPI’s while Chinese consumer prices never really budged at all. It took more than a year and a half between later 2017 and the start of 2019 for the globally synchronized downturn and recession to accomplish a meeting of prices in China. With the discrepancy far greater now, and with the global “recovery” never having gotten even that little as “globally synchronized growth”, would it really be surprising if reversion this time comes about even faster?

Right in time for taper. No wonder such stubbornly low real rates in Treasuries (which price these global conditions) with no regard for the Fed’s sudden “hawkishness.”