While most people were still digesting the headline US BLS report and its unemployment rate’s latest dip on Friday, over in Germany a few hours before the American release the other country’s economic bean counters at deStatis had already published some puzzling, seemingly inconsistent data. Measuring total industrial output, Industrial Production, the Germans said theirs had declined by a substantial 1.1% in September 2021 from August, following when IP was already down (revised) 3.5% in August compared to July.

In fact, Germany’s vast industrial sector has been way off all year and getting worse. Recovery. Boom. Inflationary fires around the world lit by a purportedly walloping good time to be in global trade – at which the Germans always excel.

By deStatis’ latest, industrial output is off 4.5% since July if only to put some emphasis into Q3’s “growth scare.” In truth, Germany’s IP is down 7.0% since the end of last year (and remains an astounding 13.4% below November 2017’s prior peak!) 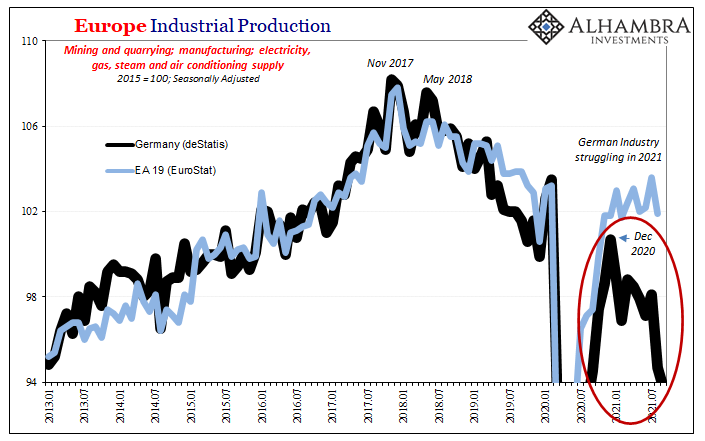 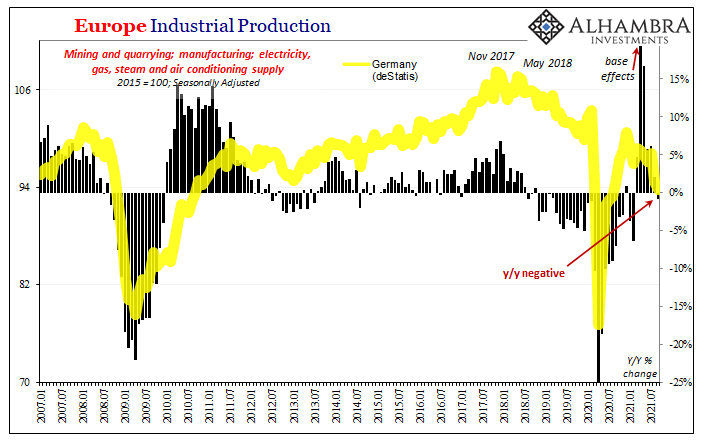 If not delta COVID then it must surely be supply shortages and logistical bottlenecks. Germany’s industrial sector would be producing at an accelerating rate, we’re told, if not for the raging snafus when trying move product around the world in any significant quantity.

But is this true? Could there be another reason(s) German factories so far out of step with the inflation narrative?

The fact that IP is behaving totally different when compared with other data regarding the flow of goods – particularly those heading out of the country – is, at first, confusing. We start with low and sinking production levels yet find total German exports to be booming.

This difference cannot be accounted for by domestic weakness, either (see: Q3 GDP and components). 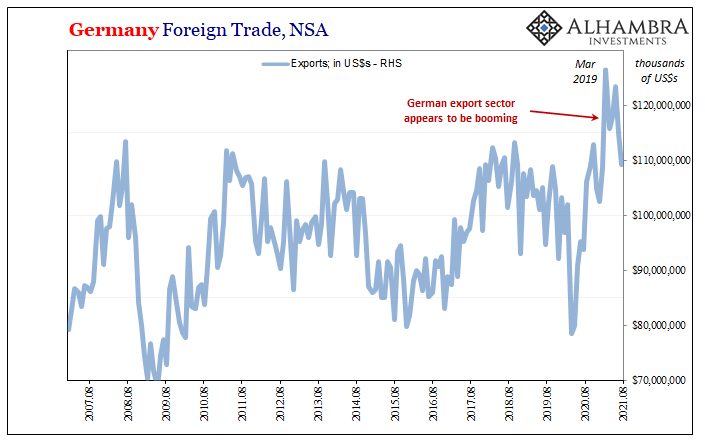 Whereas production is dropping, exports remain noticeably sky high; priced in euros, outbound goods were up 14.5% year-over-year in August (the latest data); priced in dollars, practically the same (+14.0% y/y). At the margins, there seems to be a huge amount of missing manufacturing.

While there is some base effect in those 2020 to 2021 trade numbers, it’s not nearly as much as in other data series. The 2-year change in overall German exports priced in US$’s was nearly 9% more in August 2021 compared to August 2019, indicating that foreign trade is significantly higher than before COVID as anyone would expect during a rapidly recovering pandemic-free world.

Even the Chinese, one of Germany’s largest trading partners, and by far its most important outside of Europe, they seem to report the same thing. According to estimates from China’s General Administration of Customs (GAC), imports from Germany priced in US$s rose more than 15.2% in September 2021 from September 2020 (and were practically the same amount higher, 14.9%, compared to September 2019).

By GAC’s figures, import activity coming from Germany (as the whole EU) has been significantly more in 2021 than at any other time in history – even when compared to 2018. Therefore, agreement with deStatis (or Eurostat): 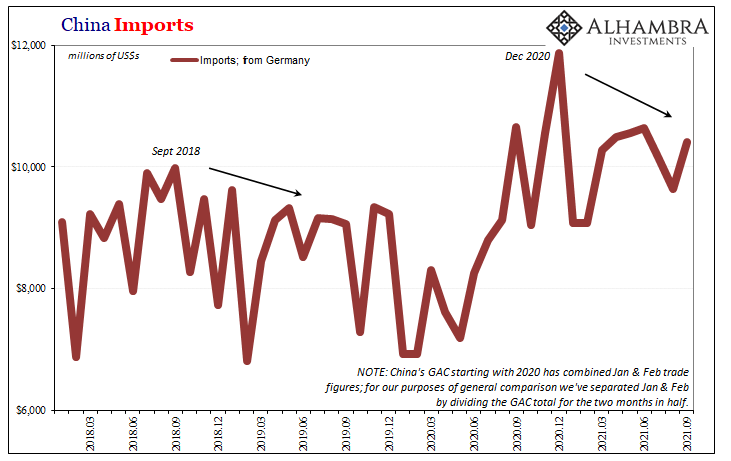 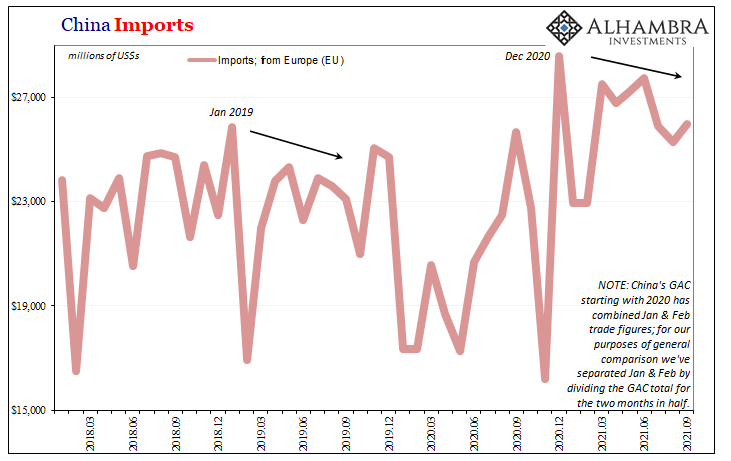 But – there was always going to be a “but” – you can already see one key problem already from the Chinese perspective. While imports coming from Europe/Germany seem pretty high, they did top out at the end of last year. In effect, import action being moved in from the developed world (including the US) has been decreasing throughout 2021 consistent with PMI data as well as China’s own industrial series (IP).

So, the marginal direction (lower) of Germany’s like China’s IP makes sense given the German economy’s substantial exposure to Chinese demand for German (and others) goods. Still, why didn’t IP in Germany go so much further ahead like exports before this year’s slowdown?

The whole difference is actually prices.

Typically, when considering all price factors behind any trade trends using US$ terms the issue is the exchange value; when it goes down (reflation) that has both a positive effect on volume (up) as well as translations (cheaper). In this case, we are actually dealing with a non-currency issue in the form of this whole “inflation”; supply bottlenecks and shipping problems increasing the list prices of many of these marginal goods regardless of a rising dollar exchange value this year.

The Chinese report that the US$ balance of trade from Germany, Europe, and even the US is much higher in 2021. From the German perspective of total exports moved out to the rest of the world, it is basically the same thing also priced in US$s (as well as €’s). 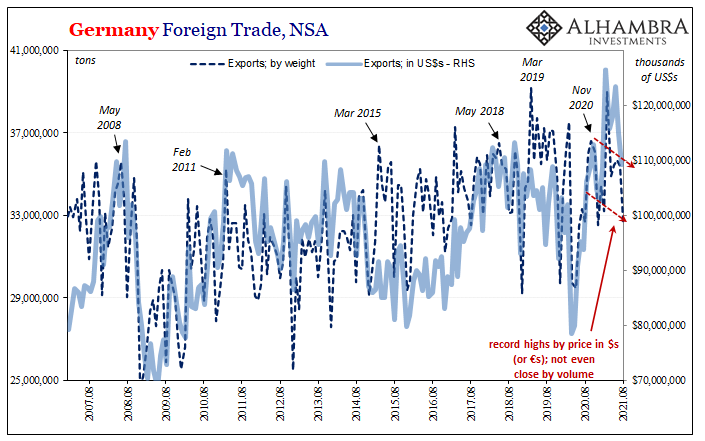 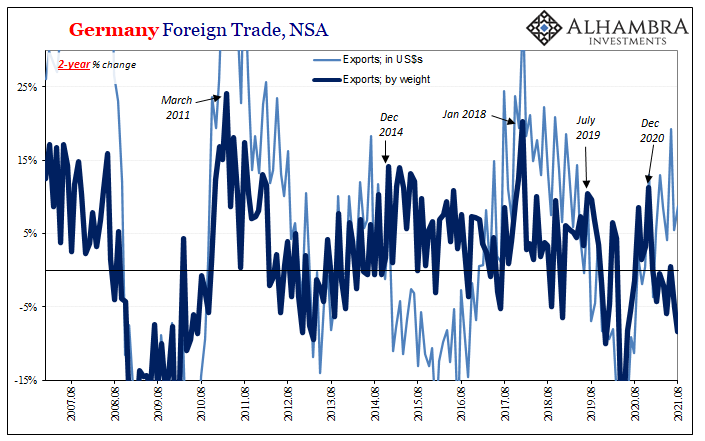 However, when look at Germany’s trade estimates from the standpoint of pure volume, a very different picture emerges. The estimated total weight of exported goods was practically unchanged in August 2021 from August 2020, but was 8.4% less than in August 2019.

Thus, not only is the physical amount of trade less in 2021 than it had been in 2019 or even 2018, the downward trend this year in German exports also matches Germany’s IP. Outside of a very good March (coinciding with Uncle Sam’s third helicopter), the volume of export trade has been declining since late 2020 and so has production.

Put together, the “inflation” caused by the world’s shipping problems has created a confusing situation where it might initially appear as if a booming economy is plagued, being held back by nothing more than these supply shortages. Clear up the supply problems and, voila, full recovery is unleashed which would, in this view, make already “inflationary” conditions that much more inflation-y.

Central bankers in a sudden rush to slow everything down (as if they could).

However, if we consider these prices as anomalous, and that the global trade system isn’t nearly so recover-ish, then what we have instead is a false signal (because no one seems to understand and appreciate inflation versus “inflation”) overlayed on top of a weak rebound which is being essentially eroded as this “growth scare” further develops.

In this other case, it’s not a robust economy merely slowing off its peak rate, there’s a seriously depressed economy hidden behind those prices which is getting more and more depressed by the month. 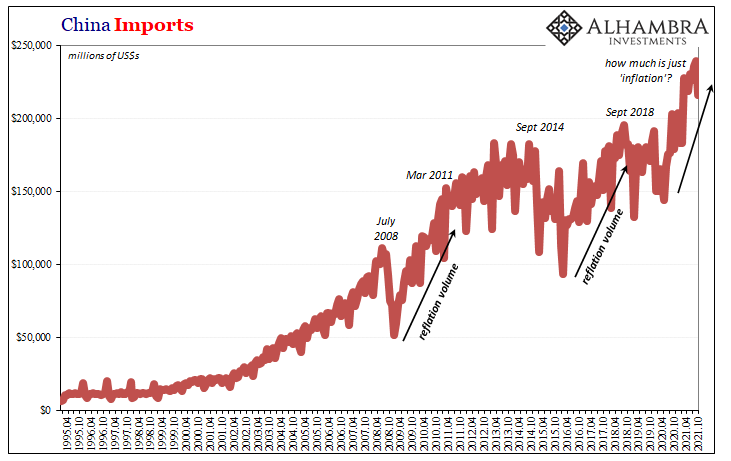 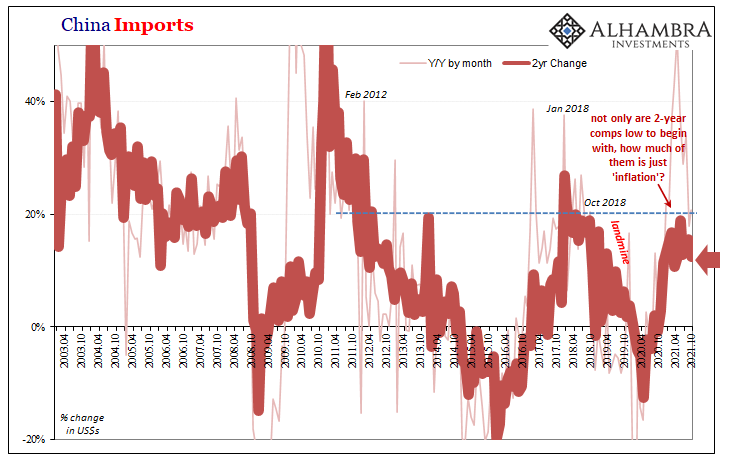 And if we look at Chinese imports using this perspective, it’s the same as in Germany. Weak and weakening output even though it seems from both sides of the trade data as if China’s doing fine if not really well. The one makes it appear as if the entire global economy is going along, if now slowing down a touch from red hot.

Accounting for prices, however, the cart goes back before the horse and we see an emerging downside from little to no recovery whatsoever; a very different set of circumstances.

Deflationary rather than inflationary potential which never really got going at any point. The very story global bond yields have been telling all year (including during the conspicuously small reflationary selloff in January and February).

Despite tapering QE6 in the US and increasingly resolute “hawkishness” all around the rest of the world’s central banks (the Bank of England notwithstanding), low rates continue to dominate as if none of the things the hawks are watching – including these prices – have anything to do with reality. Maybe the global economy really is struggling this bad, having little or at least less to do with the coronavirus and these supply issues.

If that is indeed the case, this right here is “inflation” not inflation, therefore a global economy in the midst of adjusting to it (transitory). 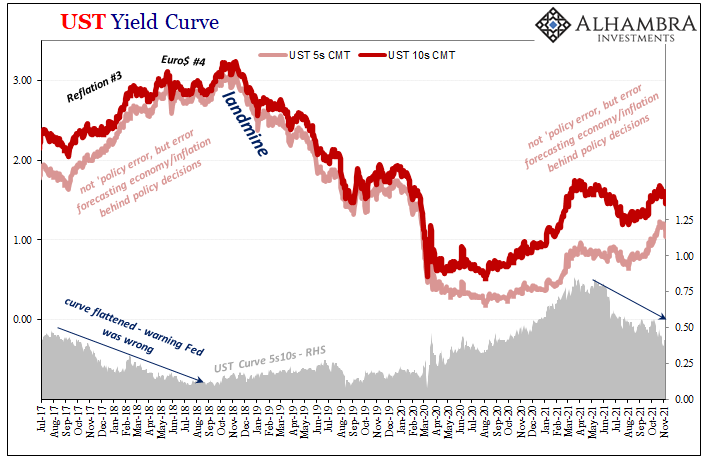 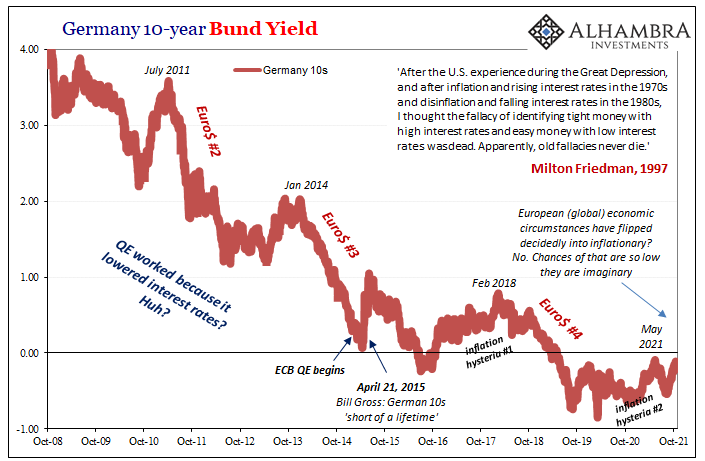