Consumer sentiment hit a decade low last month, falling 6 points from an already low level. The culprit? Inflation, which we learned last week hit a 3 decade high in October. And if the founder of the University of Michigan consumer sentiment survey is right, the next thing we’ll see is an economic slowdown. George Katona was a psychologist who applied psychological principles to macroeconomics in devising the consumer sentiment survey. He’s kind of the godfather of behavioral economics and one of his main theses was called the Katona Effect. In short, it says that there is a relationship between consumer spending and the volatility of inflation. As inflation volatility rises, consumers pull back, saving more and spending less and vice versa. So far, despite the drop in sentiment, consumption seems to be fairly robust. But the longer this burst of higher prices persists, the more likely it is that we’ll see a retrenchment.

I think there are two reasons we haven’t seen much impact on spending yet. The first is that consumer confidence has not followed consumer sentiment lower. I know that sounds contradictory but bear with me. The biggest drop in the consumer sentiment survey was in expectations about future conditions. 25% of respondents said their living standards have been reduced over the last year by inflation but half said they expect lower incomes after inflation over the next year. These types of responses reflect how the questions in the consumer sentiment poll are posed. The responses are generally about people’s personal situations, not the economy as a whole. Consumer confidence, on the other hand, is a survey conducted by the Conference Board and focuses on employment and labor market conditions. The questions tend to be more about the general nature of the economy rather than the respondents’ personal situation. And since the labor market continues to look pretty good, consumer confidence remains fairly high. Meanwhile, consumers cited rising prices for homes, vehicles, and durable goods as negative more frequently than they have in 50 years. Their personal situation may not be that great but they are still confident in the economy overall.

I think we can connect these dots – and offer some hopeful signs – through another report released last week, JOLTS. Job openings fell only slightly in September (JOLTS runs late) while quits hit a new all-time high. It is the quits rate that offers some hope that the lousy consumer sentiment of today may not turn into a consumption drought tomorrow. Inflation has hit the poorest the hardest and the JOLTS report shows they aren’t just taking it lying down. The biggest jump in the quits rate is in the Leisure and Hospitality category, up from 4.5% to 6.4% over the last year. In short, the working poor are not happy with their situation and they are doing something about it. Whether they can actually get better work is a question we can’t answer yet but with record job openings the possibility is certainly there. And while there may be a skills mismatch, we know too that, because there is a dearth of workers, companies are more willing to train new employees than they have been in the past. If people can make this transition from low-paid hospitality work to something that pays more, we may get past this episode without seeing a big drop in spending.

We’ve seen divergences between these surveys in the past and they don’t usually last all that long. Either sentiment improves or the impact of it will spill over into confidence in the economy as a whole. This may also be a function of politics. The U of Michigan report included a note on political division showing partisans from each side have starkly different visions of the economy. Biden supporters have adopted a very favorable view of the economy whereas those on the opposing side have a very negative view. There was a similar divide during the Trump administration in the other direction but it didn’t lead to a boom so maybe this won’t lead to a bust either. Of course, we didn’t have inflation running at these levels then and the Republicans very much blame higher prices today on President Biden. Whether that is true or not is irrelevant because it probably isn’t going to change any time soon. Could a Republican sweep of the midterms make a difference? Maybe, but I wouldn’t count on it. If the inflation situation doesn’t change, Biden will still get the blame as Presidents always do.

I don’t know whether we’ll be able to avoid the worst of the Katona effect but we did see an immediate impact in markets last week from the hot inflation reports. TIPS yields hit all-time lows last week even as nominal yields rose, the result being that inflation expectations rose, especially over shorter time frames. 5-year breakevens are at their highest ever (data only goes back to 2003) at 3.11%. 10-year breakevens are lower but also near an all-time high at 2.73%. But 5-year, 5-year forwards (a measure of inflation expectations in the second 5 years of the next decade) remain well-anchored at 2.35%, well below the all-time highs. The bad news is that I don’t think we’ve seen the high print on CPI yet, although I hope I’m wrong about that. Higher rents and housing prices are starting to feed through to CPI and that isn’t going to end soon either.

Those all-time low TIPS yields are not a good indication about future real growth and continue to concern me greatly. Low and negative real yields imply a very low hurdle rate for investment and should, theoretically, induce more investment spending. But theory and practice in economics rarely meet except in the simplest situations and this is no exception. I won’t get into the details of the economics arguments about real rates, productivity, and growth except to say that you can lead a horse to water but you can’t make him drink. And you really ought not get between a drunk and a bottle of whiskey. 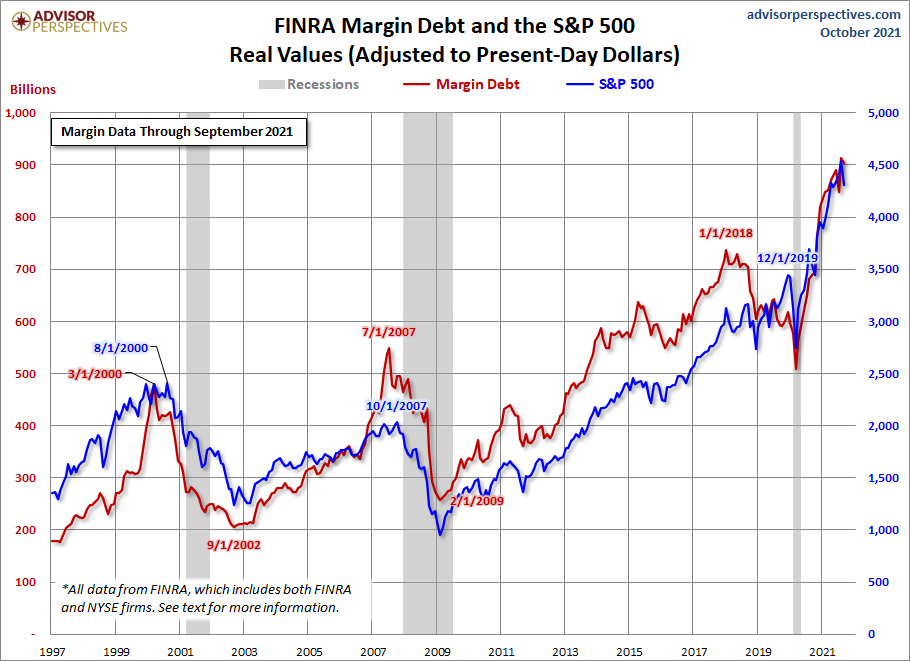 While I am concerned about low real rates, I don’t want to get too negative either. There are still good things going on in the economy and while low rates may not be sufficient to induce investment, other factors may tip the balance. The labor situation, all those job openings and not enough people to fill them, is one of them. Whether the worker shortage is due to a skills mismatch or just companies not offering a high enough wage, investment in automation offers at least a partial solution. And there is a long list of technology investments that I think are finally starting to make sense and getting funded. Corporate investment plans are on the rise across a wide range of industries and core capital goods orders reflect that. The pessimism expressed in low real yields today and the inflation fears that produce them may both prove transitory.

Those inflation readings last week were indeed pretty hot and at least for CPI, unexpected. While prices are rising across a variety of categories, the ones that really jumped last month were energy-related. Food prices are jumping too and since I don’t expect natural gas prices to come down that much or for that long, that is another category, along with rents, that may require a new definition for transitory.

The JOLTS report was generally positive but the hires rate still needs to improve. 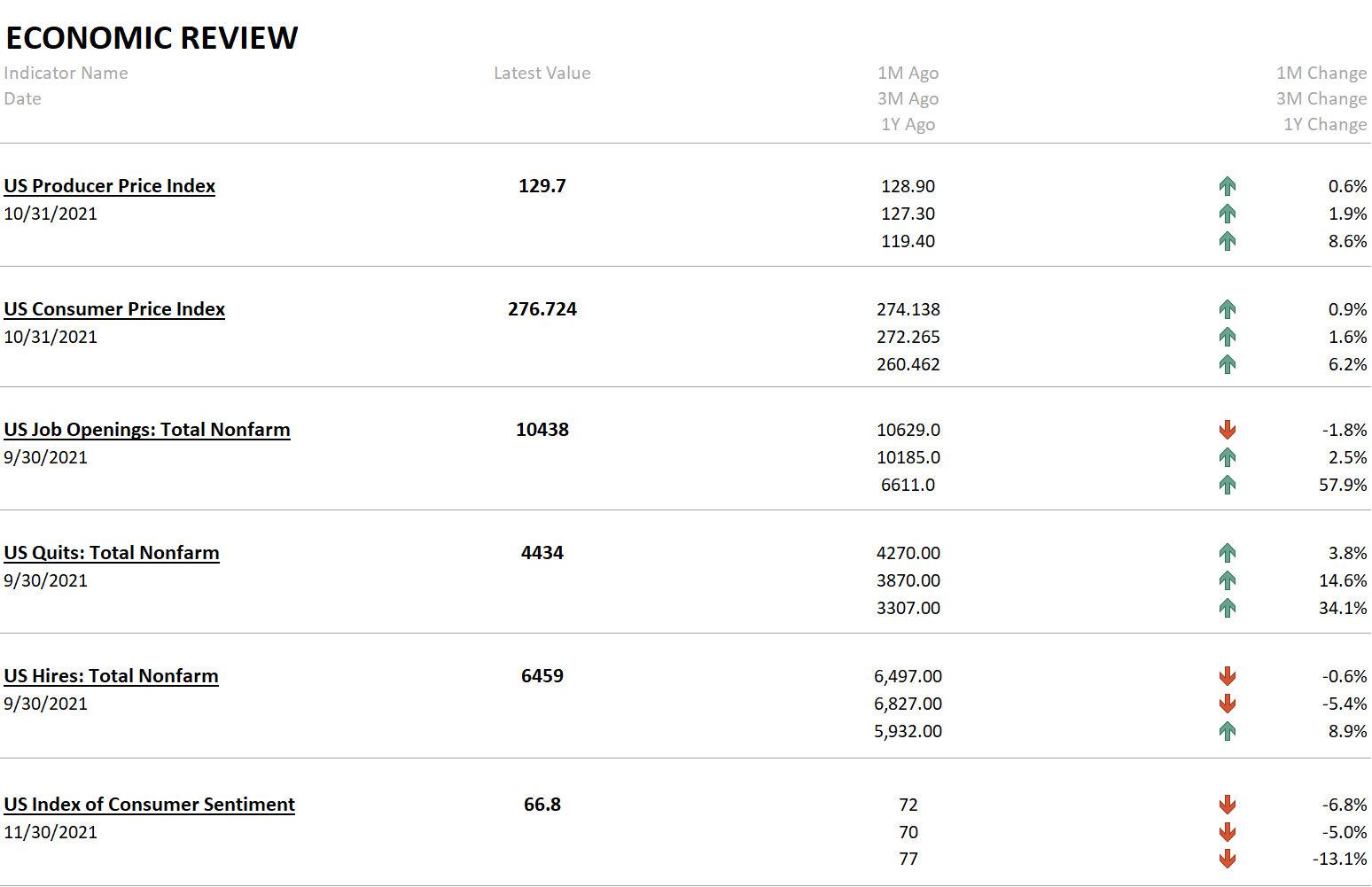 Retail sales and housing data lead the calendar this week. Both are expected to show improvement. 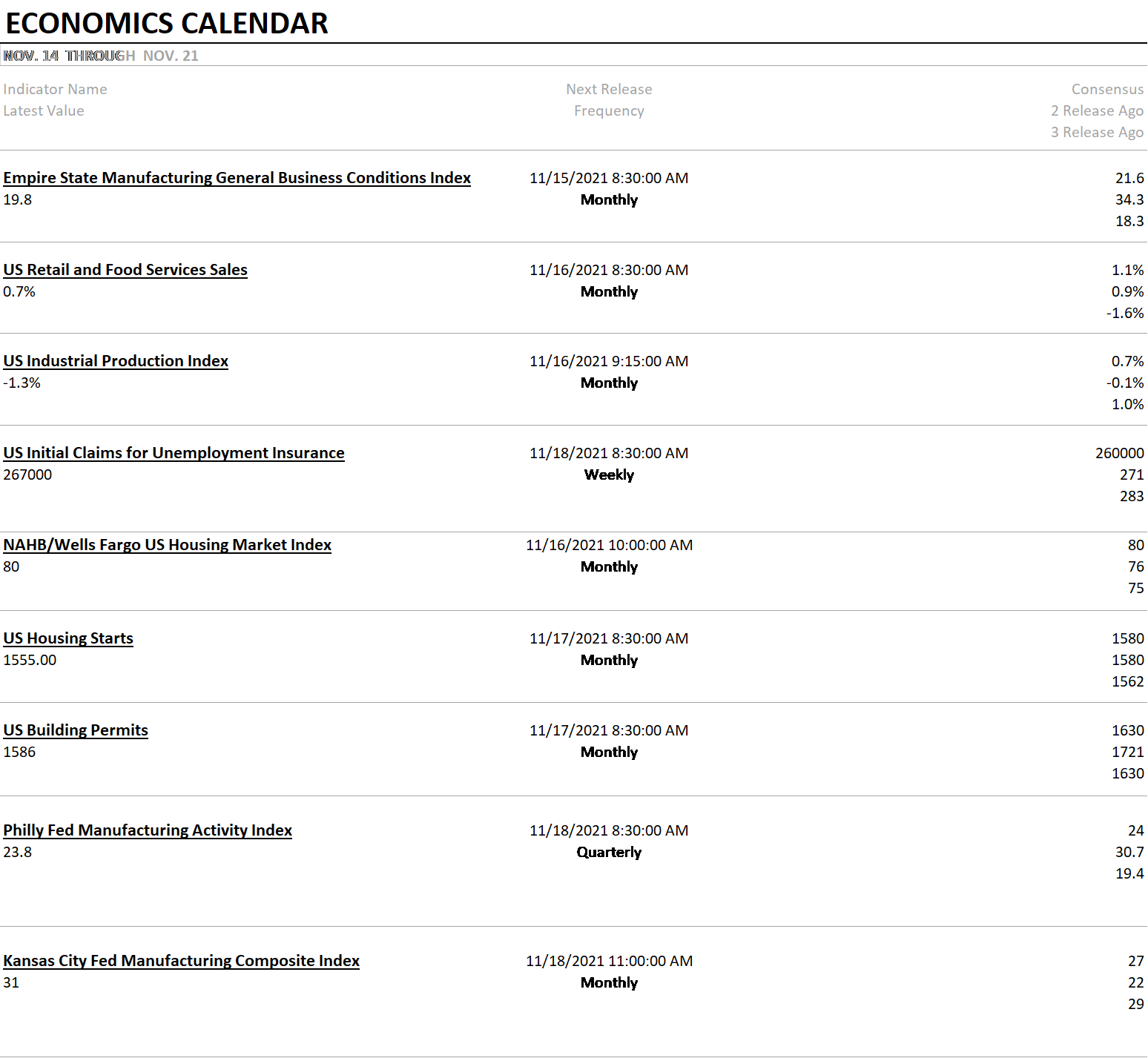 Stocks were down last week due to rising rates I suppose but the drop was inconsequential. Most surprising actually is that emerging market stocks were up even with the dollar at its highest level in about 14 months. That was mostly due to China which is starting to recover some from this year’s selloff. Sentiment may have gotten a tad too pessimistic.

Value outperformed last week but the difference was negligible. Why was mid-cap up? No clue. 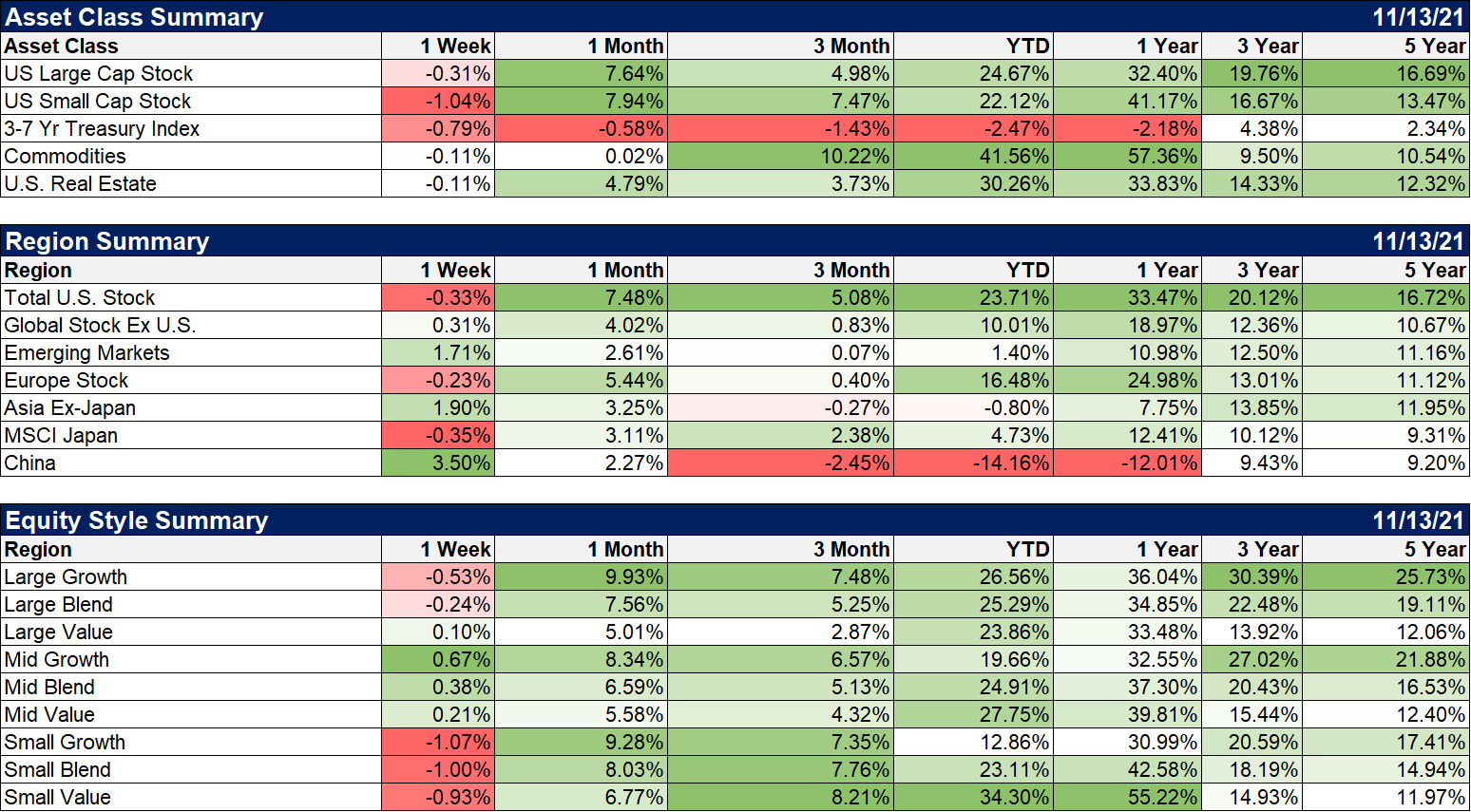 Consumer cyclicals are starting to correct as Elon Musk decided to make a public spectacle of paying his taxes. Or something. I rarely have any idea what his real agenda is and I’m not sure he does either.

The most interesting move last week was gold which finally responded positively to the drop in real yields. Gold hasn’t been able to rally with falling TIPS yields which is unusual. I am assured by the crypto crowd that is because people are buying bitcoin instead of gold but I’m not entirely convinced by that argument. 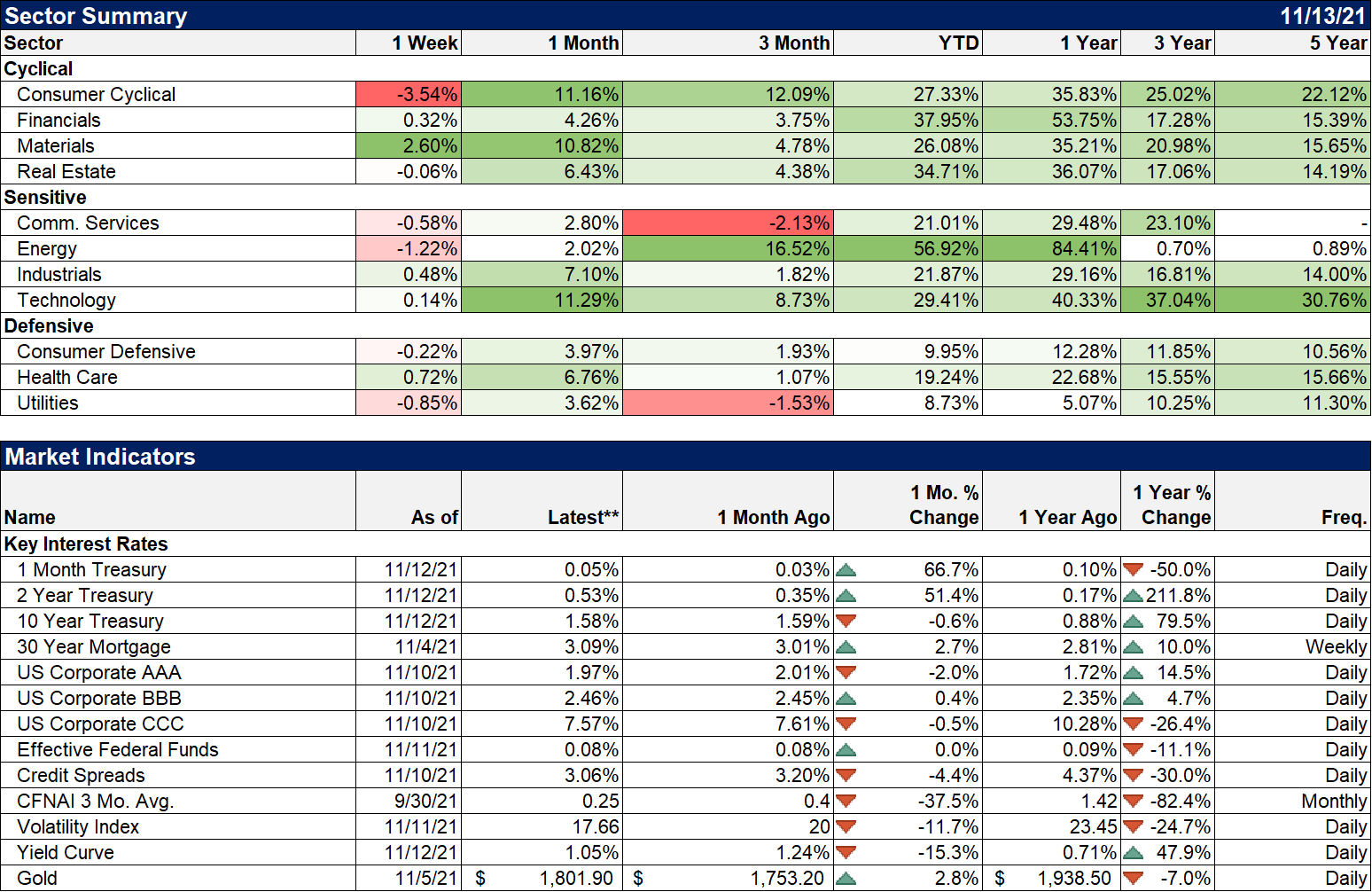 If this inflation surge ends soon, we may be able to avoid the worst of the Katona effect but solving the supply side issues doesn’t seem like an easy or quick fix. Indeed, the easiest fix for current inflation may be exactly what George Katona predicted – a drop in demand. I have my doubts on that though. Contrary to popular belief, the spending from the various and sundry “stimulus” programs is not even close to over. States are flush with cash and politicians make drunken sailors look prudent. So, we’ll see, but my guess is that the inflation headlines are not over.

There is a robust debate right now between the inflationistas and the deflationistas about the nature of these rising prices. With all due respect to both sides, it doesn’t matter what you think or what you call it. The people who have to pay the bills only know that their bank balance is looking lighter at the end of the month. It is inflation to them and that is all that really matters. And the longer it goes, the louder the complaints, the more likely it is that the politicians – in Congress, the White House, or at the Fed – do something stupid. Which is unfortunate because the fastest way to end this inflationary period is for them to do less, not more. A libertarian can hope.