OK, Your Euro$ Curve Has Inverted, Now What?

OK, Your Euro$ Curve Has Inverted, Now What?

So, the eurodollar curve has inverted. Bad news. Now what?

While this is a major milestone in the monetary system’s decidedly anti-inflation/growth journey, it is hardly the end point of it. On the contrary, though it takes a lot of negative, deflationary potential to distort the curve in this way, we need to see if the market sticks with that potential rather than just some flashing rush of otherwise fleeting concern (for the record, this hasn’t happened; once upside-down, it has in the past stayed upside-down).

Day 2 of inversion, and, yes, the curve is a tiny bit more overturned than yesterday. Even though the whole curve itself moved up somewhat, falling prices nearly across-the-board, therefore a higher nominal curve level, we are instead interested in the shape of it independent of how it might move up or down.

For the time being, our focus for now remains on the twisting. And we shouldn’t expect much more out of it. At least, for now. 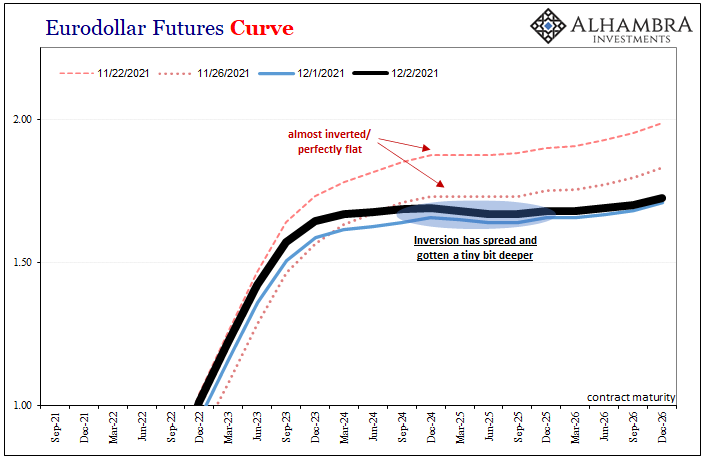 Therefore, inversion Day One did indeed stick around for Day Two. Not good.

What might we expect over the coming weeks and months?

Using both the 2006-07 example as well as the more recent, and darn near carbon copy 2018 curve, it may be that this small amount of upside-down is all we get for some time. Though it then may seem insignificant, it is actually that amount of time rather than depth of inversion which is important as a leading indication. 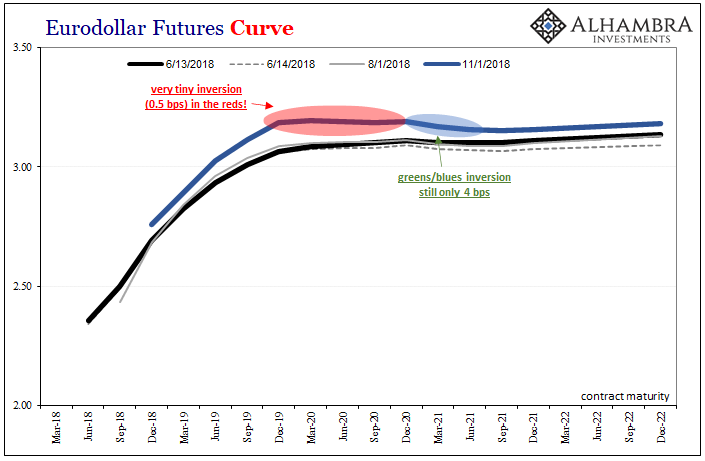 Going back to three years ago, from the initial inversion on June 13, 2018, the nominal eurodollar futures curve moved a little bit up and down throughout the summer and early autumn. It was practically unchanged until October, and then things started to heat up.

By early November 2018 (shown above), even then the same greens/blues inversion was still no more than 4 bps. Seemingly a pittance, therefore easy to just ignore how it hadn’t completely blown up even after four and a half months.

However, the curve also developed a miniscule inversion right in the reds. And though this one was just half a bip, that seemingly trivial amount of upside-down along with those several months stuck in distortion greens and blues, those together were a powerful and absolutely clear sign the situation was substantially deteriorating.

Remember, Jay and the media were more confident all the time (and, in September, data like payrolls and the unemployment appeared to make that confidence seem inspired).

Within days from the start of November, the landmine blew the whole thing apart which removed all doubts. It was no longer just greens and blues, reds and even whites were in total disarray. The unambiguous implication of wreckage and potential for more and worse was finally clear and out in the open (not just eurodollar futures, it was everywhere from oil contango to inverted parts of the yield curve!)

Even the Fed by early January could no longer deny and pretend the situation was as it had told the public to expect. The embarrassing early January flip flop greeted a “Fed pause” that then mutated into outright rate cuts by July 2019. 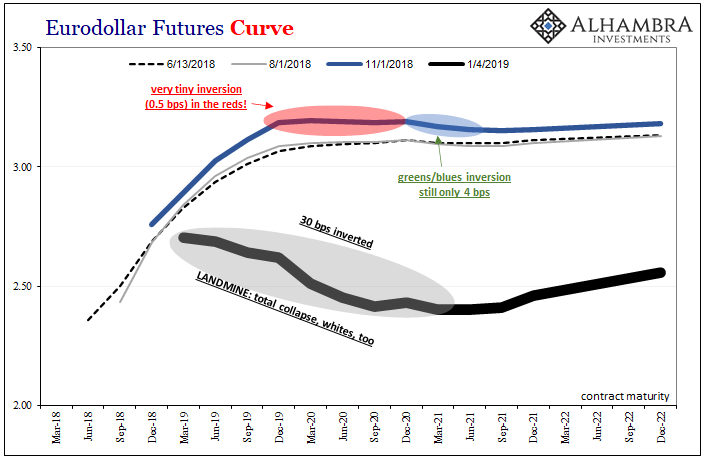 All as the eurodollar futures curve had thoroughly priced/predicted throughout the last half of 2018 right on into 2019. Even when it didn’t seem like much at all, just a few basis points, the fact those inverted few hung around and hung around, distorted the curve week after week, month after month, it was actually a very ominous warning of what was to come.

Given this example, this is what we’ll be watching – along with all the usual suspects including the flatter and flatter Treasury curve as well as what might be another crack at zero by the JGB 10s. The dollar’s rise. There are others, as well.

These things are progressions, and rather lengthy ones. In today’s day-to-day focused world, it’s easy to lose sight of what this all really means; or just get bored with it since it might not seem like anything has changed. You see an inversion and it is shocking at first, if only because it really, really shouldn’t be there. But then if or when it doesn’t really seem to do much thereafter, maybe you relax and lose focus. 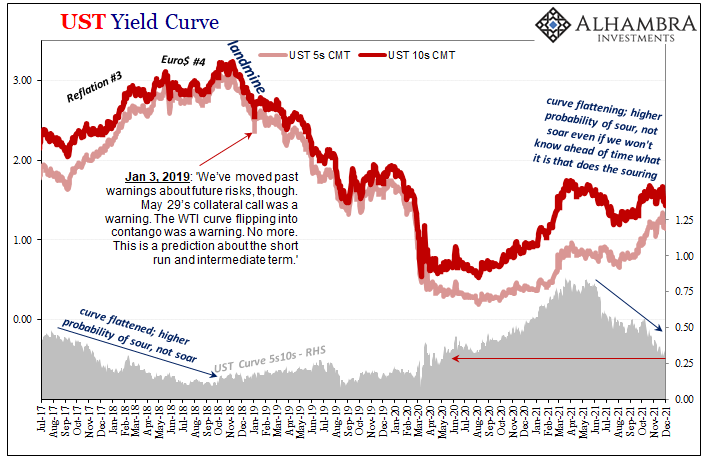 Then, “suddenly”, bam, the landmine and the whole landscape changes; or, more accurately, the landscape doesn’t really change, it just becomes so obvious and obviously bad that there’s no alternative but to pay close attention.

In other words, at this stage it’s not the depth of inversion, it’s that it is and remains there at all for any further length of time. Nothing so offends the natural financial order as this; ugly and foreboding even at a outwardly minimal state.

Put it this way: if it takes quite a lot of bad vibes just to get the curve, any curve, inverted just the bare minimum (like yesterday) in the first place, what level of pessimism, skepticism, and downright risk aversion must there be hidden from within the shadows to keep it there for any length of time at any depth?

That’s what we are contemplating already today.