The economic news recently has been better than expected and in most cases just pretty darn good. That isn’t true on a global basis, as Europe continues to experience a pretty sluggish recovery from COVID. And China is busy shooting itself in the foot as Xi pursues the re-Maoing of Chinese society, damn the economic costs. But here in the US, the rebound from the Q3 slowdown is in full bloom. Just last week we had pending home sales, ADP employment, both ISM reports, jobless claims, Challenger job cuts, the unemployment rate, and factory orders all better than the pundits’ expectations. I didn’t list the official employment report (establishment survey) because the headline was less than expected but there were some obvious seasonal adjustment issues with that report. And there was a lot of very good news in the household report that more than offset any disappointment in the number of jobs part of the report. There are still a lot of reports to go before the end of the quarter but right now the Atlanta GDPNow page is showing 9.2% GDP growth for Q4 based on the quarterly data released to date. The economy certainly looks like it is on solid ground right now.

So, why in the world are bonds rallying like     a vaccine stock? The 10-year Treasury yield fell 10 basis points on Friday after the payroll report. Well, actually that isn’t accurate. Right after the employment report at 8:30 AM, yields rose and peaked at 9:30 AM at about 1.47%. But yields fell relentlessly for the rest of the day, closing at about 1.35%. Short-term rates have been rising due to anticipation of Fed policy but the long end is in full-on conundrum mode. The result is a yield curve (10/2) that has flattened all the way back to where it started the year. The 10-year yield peaked in the spring around 1.75% and except for a brief pop higher from August to October, it has been downhill ever since. TIPS yields have been even more pessimistic with the 10-year yield still less than 10 basis points from its all-time low.

The fact that the current economic data is quite good while the bond market points to something less positive is actually not that odd. The movements in bond markets today are not – mostly – about the economic data being released today. The incoming data obviously has some impact but really what bond market players are trying to do is look ahead to next year. The time frame of that focus – 6 months, 9 months, or 12 months ahead – shifts based on events but it is always some point in the future. And those expectations about the future are shaped by past experience and unexpected events.

So, why is this happening? What is it that bond traders see that has them marking down future growth? If you’ve been reading my commentaries for any length of time you won’t be surprised when I say I don’t know. There are a lot of things that influence bond traders, some of them having nothing to do with what is going on in the US economy. European investors may buy US Treasuries because the yield, while minuscule, is higher than they can get at home. But in general, as I’ve said many times, we take bond yields at face value. If bond yields are falling, that means growth expectations are falling. More recently the drop in nominal bond yields has been mostly about falling inflation expectations but the fact that TIPS yields remain near their all-time lows tells you that investors are still on edge about rising prices. But the bottom line is that we can never know what is in the minds of millions of investors making decisions about whether to buy or sell bonds. It is obvious though that if investors are buying 10-year Treasuries at a big negative real yield their expectations about future growth aren’t very good. And that was true even when the 10-year was trading at 1.75%. It’s just gotten worse recently.

The emergence of a new variant of COVID may have had an impact recently but yields were falling well before that became news. I would venture a guess that omicron, by itself, is not the cause of more economic pessimism, but it may have caused a reassessment of the timeline for COVID. I think a lot of people were thinking that Delta was the final wave and now, suddenly, we’ve got another one. It has certainly caused me to think about whether we’ll be dealing with COVID – and more importantly the political response to it – for a long time to come. We don’t know how the omicron variant is going to play out yet but cases are rising and investors may just be taking pre-emptive action, selling stocks and buying bonds. But that is just a guess.

It could also be that the market is starting to price in a Fed policy error which would certainly be consistent with past experience. The last three Fed Chairpersons haven’t exactly been maestros and the one who originally had that title was also the one who couldn’t figure out why bonds were rallying while he hiked short rates (Greenspan’s “conundrum”). Policy errors are the Fed’s default mode; the surprise would be if they actually got something right. I have to say though that assuming economic harm from the end of QE requires a more positive view of the impact of QE than I can muster. That is unless you assume that ending QE will negatively impact risk assets and that will negatively impact the economy. In our current speculative state, that may be more true than in the past so I won’t discount it completely.

While the recent stock market sell-off has been generally blamed on the emergence of the omicron variant, the bond market says it is more likely that investors are starting to question the long-term growth outlook. With Fed policy now turning more restrictive – that is how most people see the end of QE even if we at Alhambra don’t  – attention may be turning to the fiscal and regulatory side of the growth equation. On that front, I see little in the pending legislation that directly addresses our long-standing economic shortcomings. There is also the small matter of the ongoing upheaval in China which seems to have the potential for a large – negative – impact on the global economy. China, in my opinion, is looking more every day like Japan at the end of the 1980s. That isn’t necessarily negative for the rest of the global economy – just as the end of Japan’s boom wasn’t – but it adds an element of uncertainty that didn’t exist until recently.

As for the pullback in stocks, it has actually been going on longer and is deeper than the averages show. Only 41% of the stocks in the S&P 500 are currently trading above their 50-day moving average compared to 92.5% in April and 76% as recently as a couple of weeks ago. Only 60% are above their 200-day moving average, a number that was 97% in the spring. It has been a small number of large company stocks holding up the averages and they’ve started to join the rest since Thanksgiving. I wouldn’t get too negative too quickly though. Many of the sentiment measures I watch are getting to levels where we would normally expect a rally. Even if this is the top of this incredible bull run, it won’t happen overnight. It takes time to change behavior and right now everyone has been trained to buy every dip. That won’t change easily but it will change eventually. For now, I am staying cautious with our allocations, holding a larger than normal level of cash.

The bond market is offering a warning about future growth but remember, it is just a warning. The bond market, like any market, is not infallible and the economy may not perform as badly as bond traders currently expect. We don’t know what the omicron variant means yet; it could well mark the beginning of the end of the pandemic rather than just another bad chapter. We also don’t know the impact of future Fed policy; could it be that ending QE is actually a positive for the economy? Maybe. We also don’t know how the changes in China will impact the global economy, how other countries may change in response. I am contrarian enough to wonder if Japan might not be the major beneficiary of China’s demise as they move to reassert themselves – militarily and economically – in the region. By the way, if you want to know what is behind the recent moves in China, you should probably read up on Wang Huning. His influence is all over Xi’s moves against their big tech companies and I’d bet there is a lot more to come.

As I said above, the current economic data isn’t the problem. It is the future the bond market is worried about. 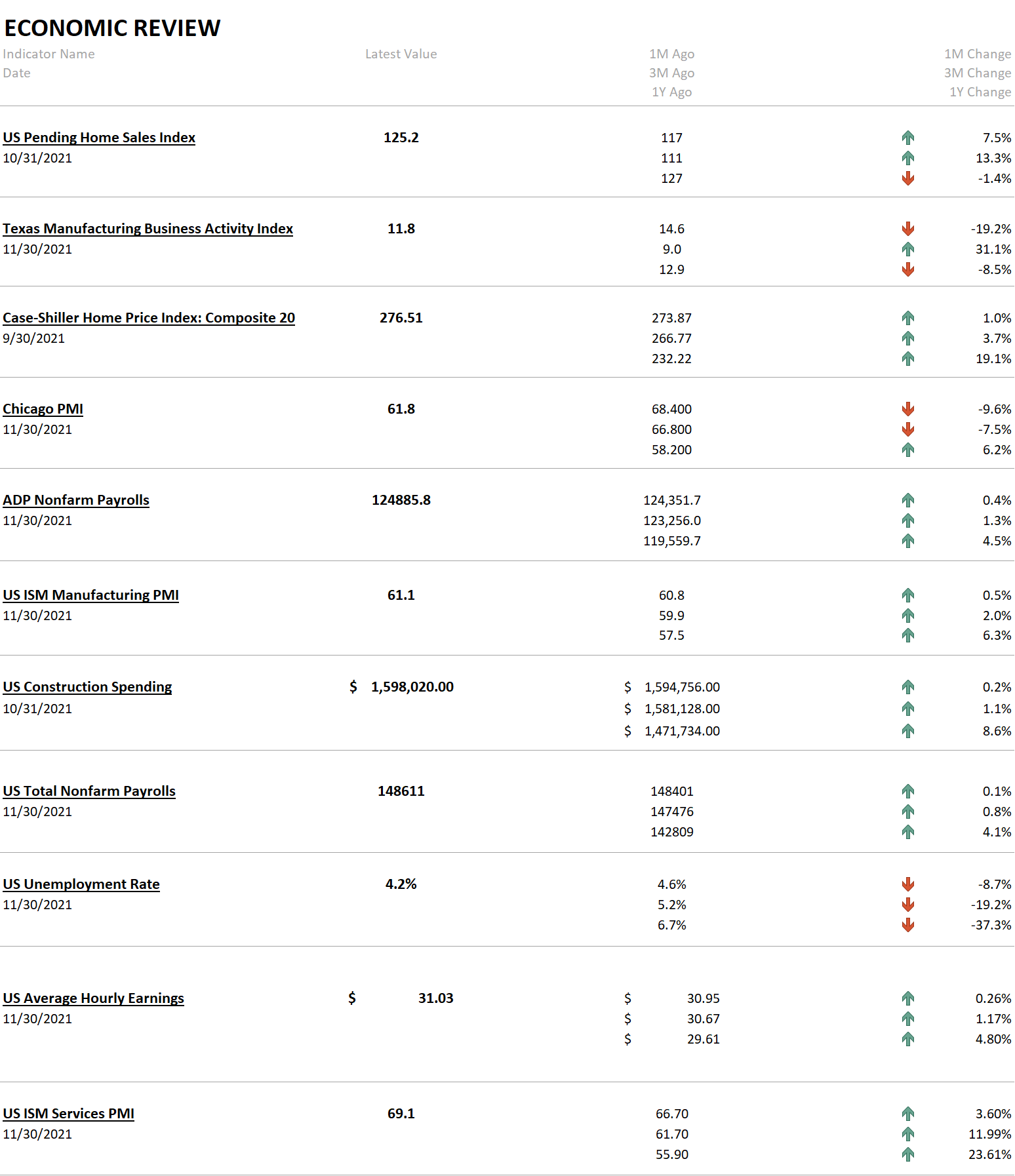 A light week of data ahead but the JOLTS report will be interesting as always. 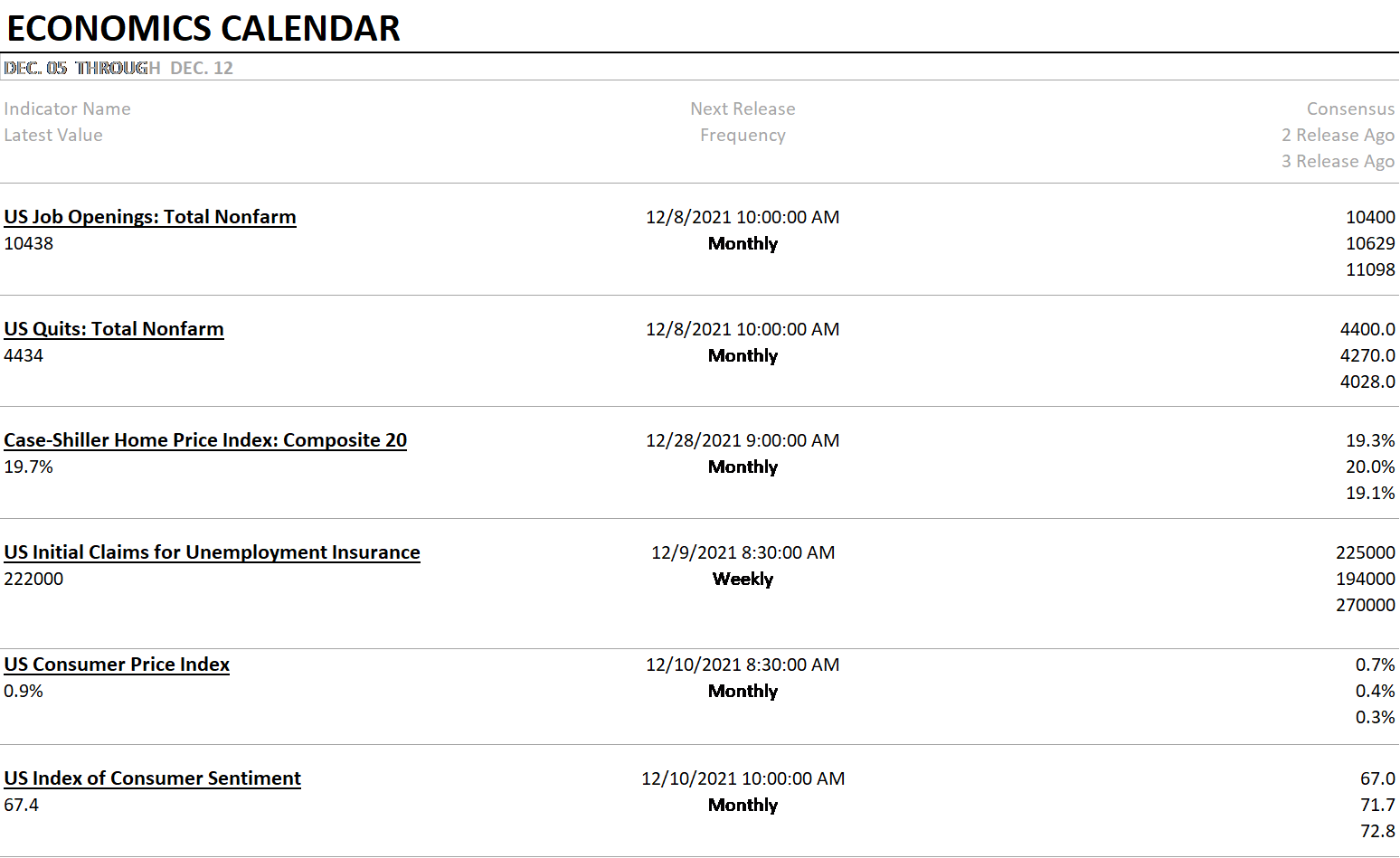 The only major asset class in the plus column last week was, of course, bonds. Real estate is also rate-sensitive and ended the week basically flat. Small caps have been the big losers in this correction; another indication that the correction is about economic growth. Interesting that EM stocks managed to stay green for the week, mostly due to, oddly, Latin America. I’m not sure I have a good reason for that other than that those stocks had been killed already. Value outperformed last week but still lags growth by a small amount. 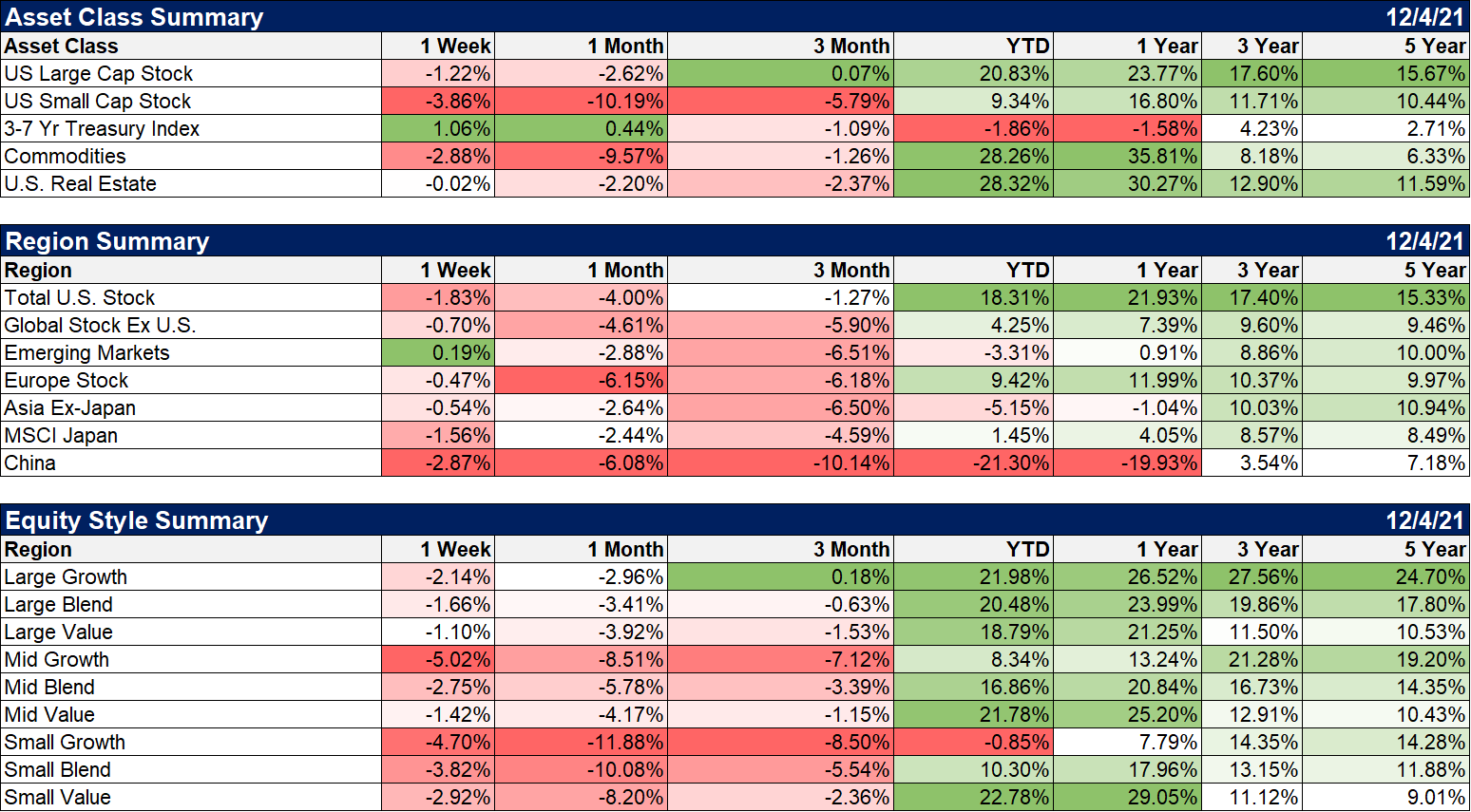 Utilities managed to eke out a gain last week while most everything else was down. Gold was flat on the week and is up over the last month as growth concerns have emerged. The VIX hit 35 last week which is fairly high based on history. 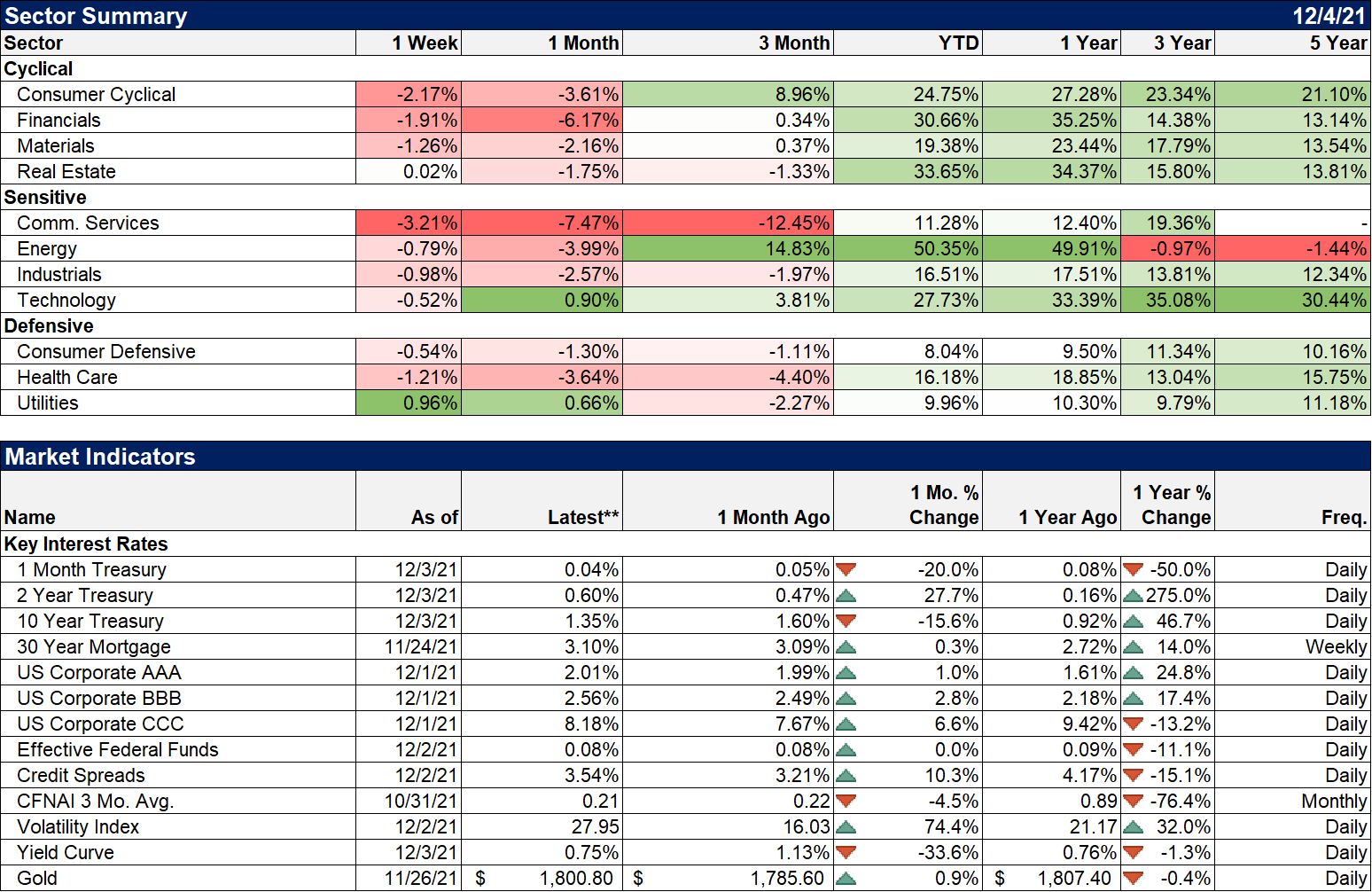 All markets look to the future, discounting the consensus view of millions of traders and investors. The wisdom of the crowd is always shifting though; the current market is just a moment in time. I’ve said many times over the last year that there is a lot we don’t know about the post-COVID economy and that is still true. The view of the bond market carries a lot of weight but it can only reflect the knowledge and best guesses of its participants. As we learn more about the changes that COVID has wrought, today’s consensus may prove too pessimistic. I sure hope so.