What was it that old Iowa cornfield movie said? If you build it, he will come. Well, this isn’t quite that, rather something more along the lines of: if you reopen it, some will come back to work. Not nearly as snappy, far less likely to sell anyone movie tickets, yet this other tagline might contribute much to our understanding of “growth scare” and its impact on the US labor market.

This topic deserves a much deeper dive than I am going to give it (for now). What the Bureau of Labor Statistics said today was that US labor productivity absolutely plunged during the third quarter. The reason, in statistical terms, was very simple: total hours worked rose more than total (private) output had; a lot more.

The raw numbers: hours increased by 1.8% in Q3 2021 from Q2, an annual rate of 7.4% which largely agrees with the other labor data. This still leaves total hours (on a quarterly basis) about 1% less than the number worked all the way back two years ago during Q4 2019; which, sadly, also matches the rest of the labor data therefore succinctly summing up the actual state (pitiful) of the labor market, Q3’s rate of change notwithstanding.

However, as we know already from the latest GDP numbers, output had been “surprisingly” weak. Private output (a subset of real GDP as produced by the BEA) only gained 2.23% (annual rate) from Q2 to Q3, the remainder between hours and output therefore productivity an enormous -5.15%!

This was the worst quarter for labor productivity in more than sixty years. 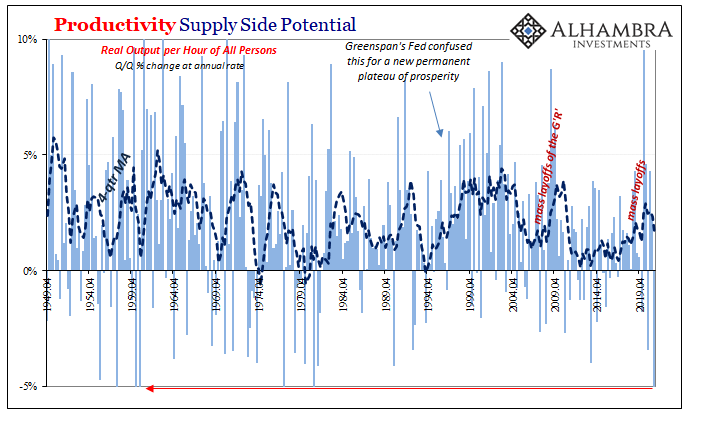 That’s not really, or necessarily, the big issue. There are, in fact, two related problems that this particular set of data does help us identify.

Economists talk about this somewhat infrequently while the media mostly avoids the topic. By the numbers, what is perfectly clear is how – in the US economy – the only time when productivity ever rises significantly it is during periods when American businesses are laying off, furloughing, or sacking employees by the millions.

I wish I was making this up: 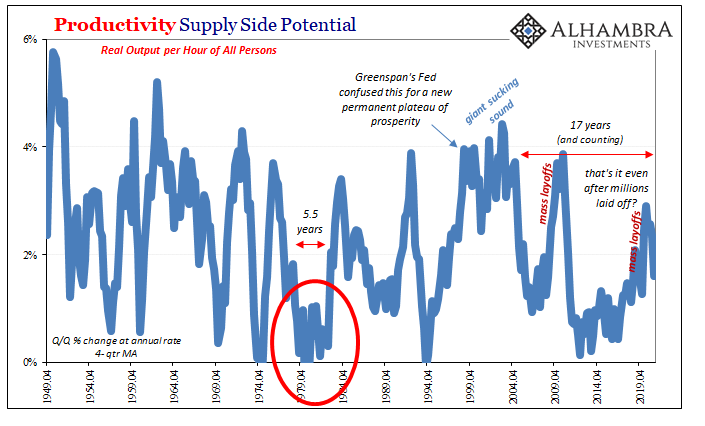 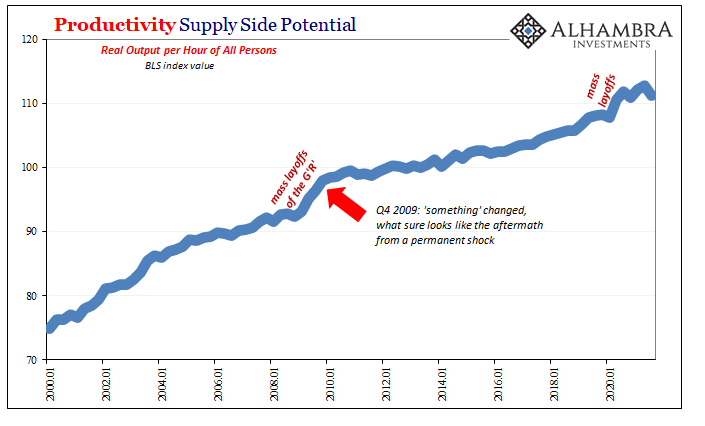 Lazy Americans, right? That’s what Economists have been considering, and pretty much only that possibility. Since right around, oh, the immediate aftermath of the Great “Recession” which was created by that global monetary thing-y disruption, now US workers, Economists claim, won’t go back to school nor will they stop intaking opioids.

Productivity, though, isn’t just a set of interesting numbers, it tells us something about business profit potential as it relates to the use of labor.

Rather than laziness, what if productivity has remained low because revenues (output) never really rose nearly as much as businesses were repeatedly told to expect? Central bankers at the Fed always claim recovery and a robust one, maybe cautious firms carefully begin to add onto their payrolls anticipating (if somewhat skeptical) a plausible (sounding) boom.

But then it doesn’t boom. Ever. Productivity suffers because there is no recovery, not a real one, and therefore, no matter how many times each successive Fed Chair talks about a tight labor market, what use do employers have for even more employees? 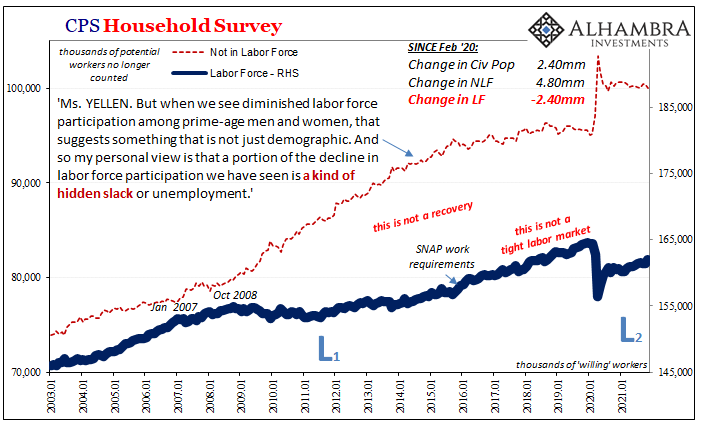 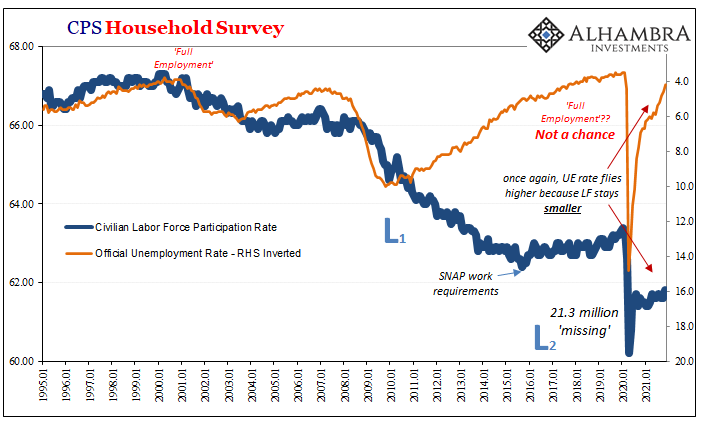 These repeated false dawns instead leave employers with having hired – in very general and aggregate terms – more workers than they really needed even though the number of workers they have didn’t increase all that much. The productivity estimates illuminate what is a very real mismatch between economic expectations and macro reality as both relate to the need for, and use of, workers.

No wonder US businesses are and continuously have been so cautious about hiring in actual fact rather than ridiculous LABOR SHORTAGE!!!! anecdotes.

This would also account for why the only real increases in productivity come during weak labor markets when seriously limited output growth better matches the situation; none more so than during the two severe recessions, first 2008-09 and then, so much unnecessarily, 2020.

Which brings us to the “shocking” disappointment of Q3 2021. Clearly, employers have brought back a substantial number of workers expecting at least the final reopening phase to have delivered in terms of their topline revenues therefore making it more than worthwhile for profits.

This awful productivity result strongly insinuates that, no sir, employers were left holding the bag yet again! Economists and Fed officials said to expect one thing and it didn’t happen (surprise, surprise).

Even if companies are somewhat forgiving, blaming Q3’s widespread macro shortfall on delta or whatever excuse-of-the month (quarter), are they really, seriously going to be falling all over themselves to bid up and on even more labor in this quarter that they clearly didn’t need last quarter?

And if the answer is, “no”, how long might this reluctance in labor utilization persist? Remembering, first, that this isn’t employers’ first rodeo with such probable false dawns. 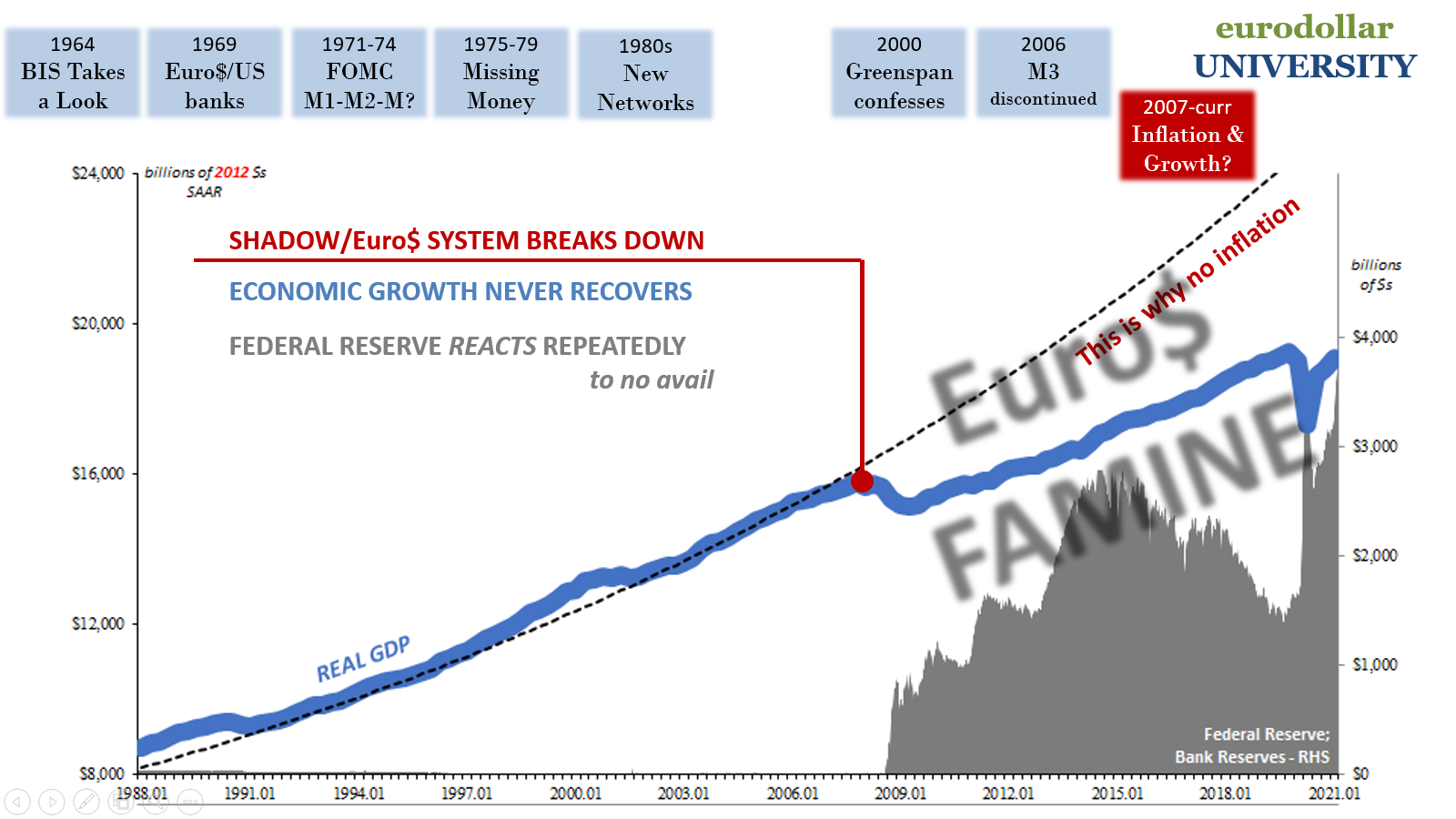 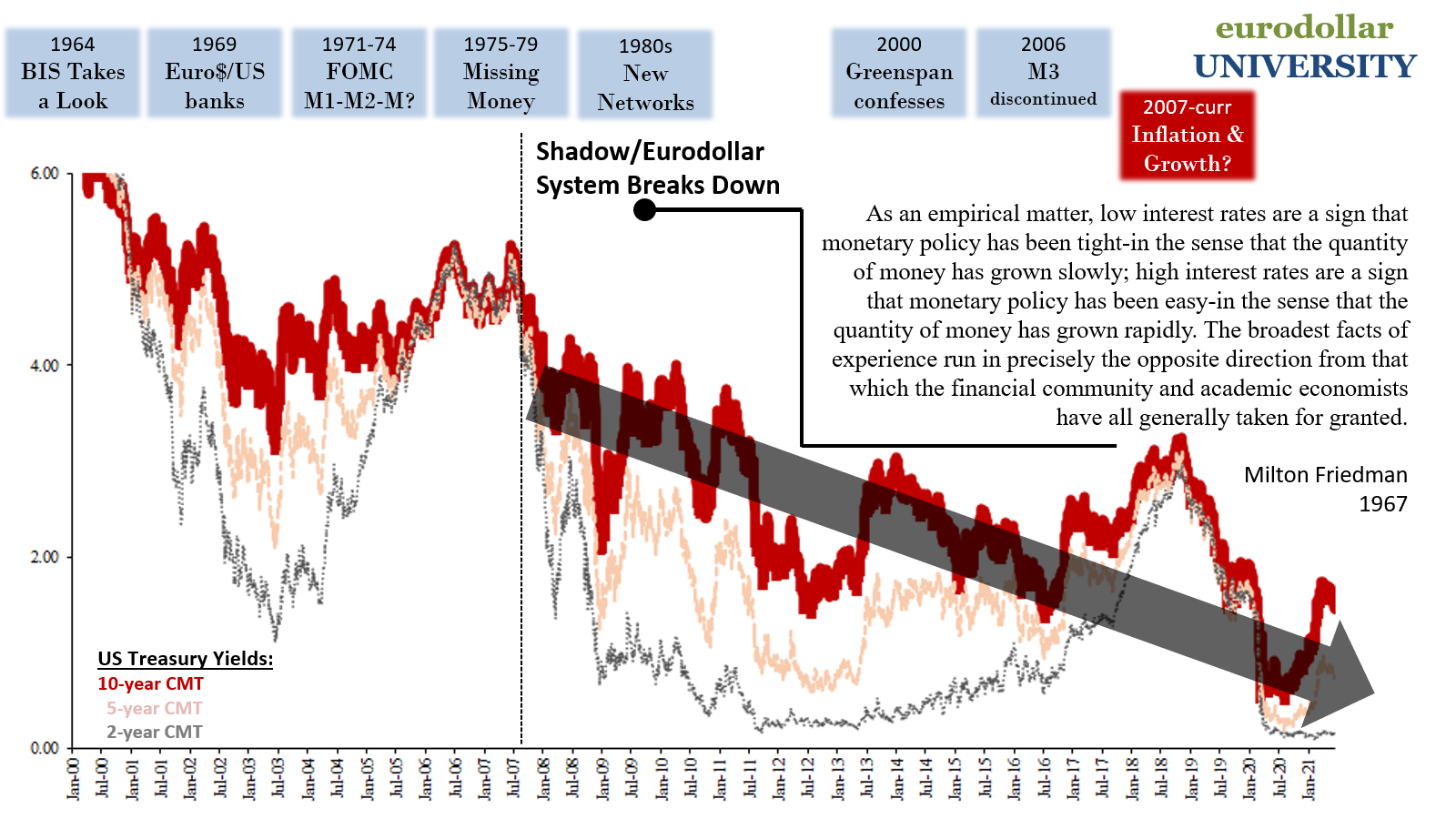 Long enough, bonds are and have already been wagering, to add up to the US labor market “surprisingly” contributing quite a lot to this latest “growth scare” that really isn’t all that different from those we’ve seen too many times, every time before. These charts on productivity, and what they mean, are other data on the other side of the labor market charts shown above.

Not widespread laziness among the American workforce, unbelievably bad forecasting created by non-money monetary policymakers who don’t have a clue what they are doing or seeing.

Keynes was right about this much more than a century ago: an economy starved of money leaves businesses robbed of revenue potential that they then pass right along to workers more so in these cases by how many never get hired or rehired in the first place. Maybe plowing under cornfields in Iowa really would be a better option, still ridiculously and foolishly Keynesian, than waiting for an economic boom no one currently can build.