The headlines last Friday were ominous:

Groceries and Christmas Presents Are Going To Cost More

This morning on Face The Nation, Mohamed El-Erian, former Harvard endowment manager, former bond king apprentice, economist, and the man who seems to have a permanent presence on CNBC, had this to say:

The characterization of inflation as transitory — it’s probably the worst inflation call in the history of the Federal Reserve. It results in a high probability of a policy mistake. So the Fed must quickly, starting this week, regain regain control of the inflation narrative and regain its own credibility.

It would be hard, in my opinion, for the Fed to regain something it hasn’t had in a very long time but I guess hope springs eternal. The Fed’s economic forecasting track record is, quite simply, awful. But Mr. El-Erian’s isn’t any better and that’s why I think the inflation scare is past its sell-by date. I wouldn’t say he’s a contrarian indicator but he is the embodiment of conventional wisdom, which is rarely wise. I’ve been watching the man for at least 20 years and I can’t remember a single thing he’s ever said that turned out to be true enough to make money on. He is a walking advertisement for passive investing. Besides, he’s a Jets fan.

I don’t know if inflation has peaked for this cycle but inflation expectations have, at least for now. Since mid-November TIPS yields have risen as nominal rates have fallen. The 10-year inflation breakeven has fallen by 30 basis points while the 5-year has fallen over 40. All while the headlines have screamed about inflation. This could be temporary, I suppose, but I see no reason to believe that we are about to repeat the 1970s. The price rises we’ve seen over the course of COVID are not ones driven by monetary policy, regardless of how loose everyone perceives it to be. The culprit is more on the fiscal policy side, as politicians provided cash to juice demand when the problems were self-inflicted on the supply side of the economy. Even today, nearly 2 years after the onset of the pandemic, consumption continues well above the pre-COVID trend. The pressure on prices will eventually be relieved as either consumption falls back to the previous trend or supply catches up with the new level of demand. Whichever it is, the Fed doesn’t need to do anything to make it happen.

That isn’t to say that I think Fed policy is now optimal. I don’t believe QE is wise, necessary, or effective. I also don’t believe that continuing to hold rates at zero is doing anything except encouraging more speculative activity, which is already well beyond anything that is healthy for our economy or society as a whole. Having said that I wonder what the rates complex would look like absent any Fed intervention in the markets. I highly doubt that rates would be a lot higher than they are; the Fed is essentially irrelevant except for their impact on market psychology. I am reluctant to say so but it may be that the speculative nature of today’s financial markets requires a regulatory response. The entire crypto market, in my opinion, is nothing more than a regulatory arbitrage, a convenient way to fleece the public by selling worthless securities that are somehow not classified as such. Or, in the case of stable coins, a convenient way to evade banking regulations. Banking regs are probably too onerous but the proper amount of regulation is surely not none.

If inflation has indeed peaked the implications for markets could be significant. Maybe the most obvious is that the demand for TIPS would likely wane; real rates would rise. That, in turn, would have implications in the real economy. Rising real rates is an indication, generally, of rising real growth expectations. As inflation ebbs, the demand for inflation protection drops, freeing up capital for more productive uses. Rising real rates would also be expected to impact gold and could also impact exchange rates. If inflation is peaking, the impact will be global.

For now, though, the changes are fairly small even if they are in a favorable direction. We can’t declare inflation dead yet and certainly, the Fed won’t when it meets next week. If anything, Powell and Co. seem likely to repeat their mistakes of the last cycle and tighten policy into a nominal slowdown. That isn’t imminent as Q4 growth looks quite a bit better than Q3 and nothing in our review of bond markets points to a big slowdown or recession. Jeff Snider has recently pointed out a calendar inversion in the Eurodollar market but the kink in that curve is currently out in 2023/24, meaning that’s where that market sees rates peaking. If that is accurate, we have quite a bit of time before we need to get worried. The term spread (10-year/2-year spread) isn’t even close to inverting and actually steepened by a couple of basis points last week. A further and larger re-steepening cannot by any measure be ruled out either. But that would require a significant change in long-term growth expectations which have been stubbornly low for over a decade. Could that happen? Sure and it may be changes wrought by COVID that make it happen. But I don’t think we can even begin to assess that until all the impact of COVID – and the response to it – has faded. That’s what next year will be about and I’ll have a longer update on our outlook soon.

Note: This will be the last weekly commentary this year unless something happens that warrants further comment. I’ll be working on the 2022 Outlook which I expect to publish in the first week of January.

There wasn’t a lot of data last week but it was generally positive. The JOLTS report continues to show more job openings than folks who want to fill them and people are still quitting their jobs at a furious rate. This churn in the labor market is an example of what I mean about the potential for positive change in the growth outlook. The people quitting their jobs are not just sitting on their couch. We know that new company formations are way above the pre-COVID level but we don’t know what exactly that means. Surely some of it is due to people shifting from employee to independent contractor – some of it involuntary – but we also know a good portion of these new companies expect to hire employees (so-called high propensity applications). Recessions and other economic disruptions are often times of great innovation and this one will probably be no different. But change like this doesn’t happen quickly so we’ll have to be patient.

One other slightly positive sign was the rise in consumer sentiment. It is still down a lot over the last year but at least it bounced up a bit from last month. 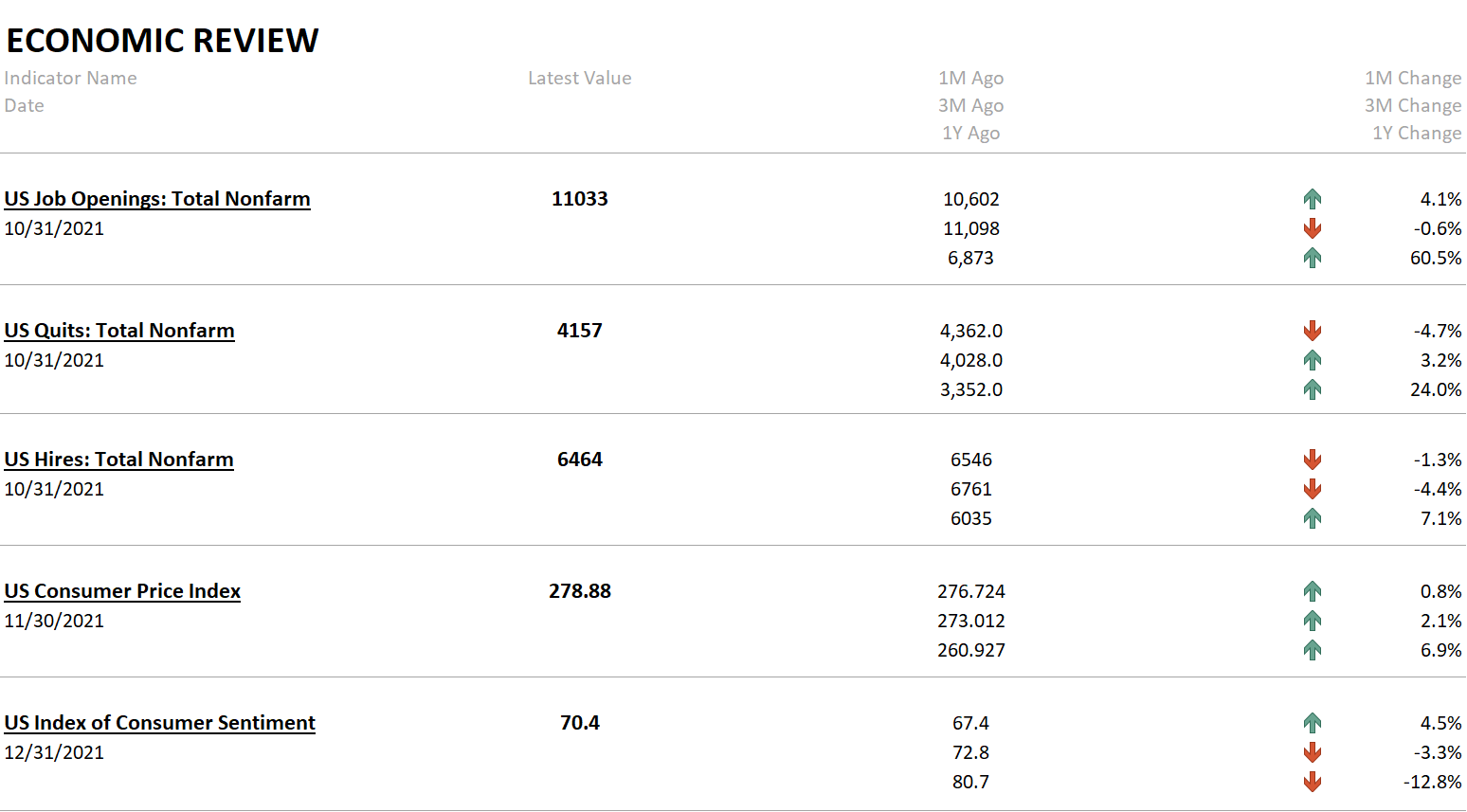 We’ll get some info on whether consumption is starting to normalize – or whether this is the new normal – with retail sales next week. The pattern of retail sales is probably distorted this year by early ordering due to supply concerns so this one could be wildly off expectations.

We also get news on housing and industrial production this week. Both are expected to improve. 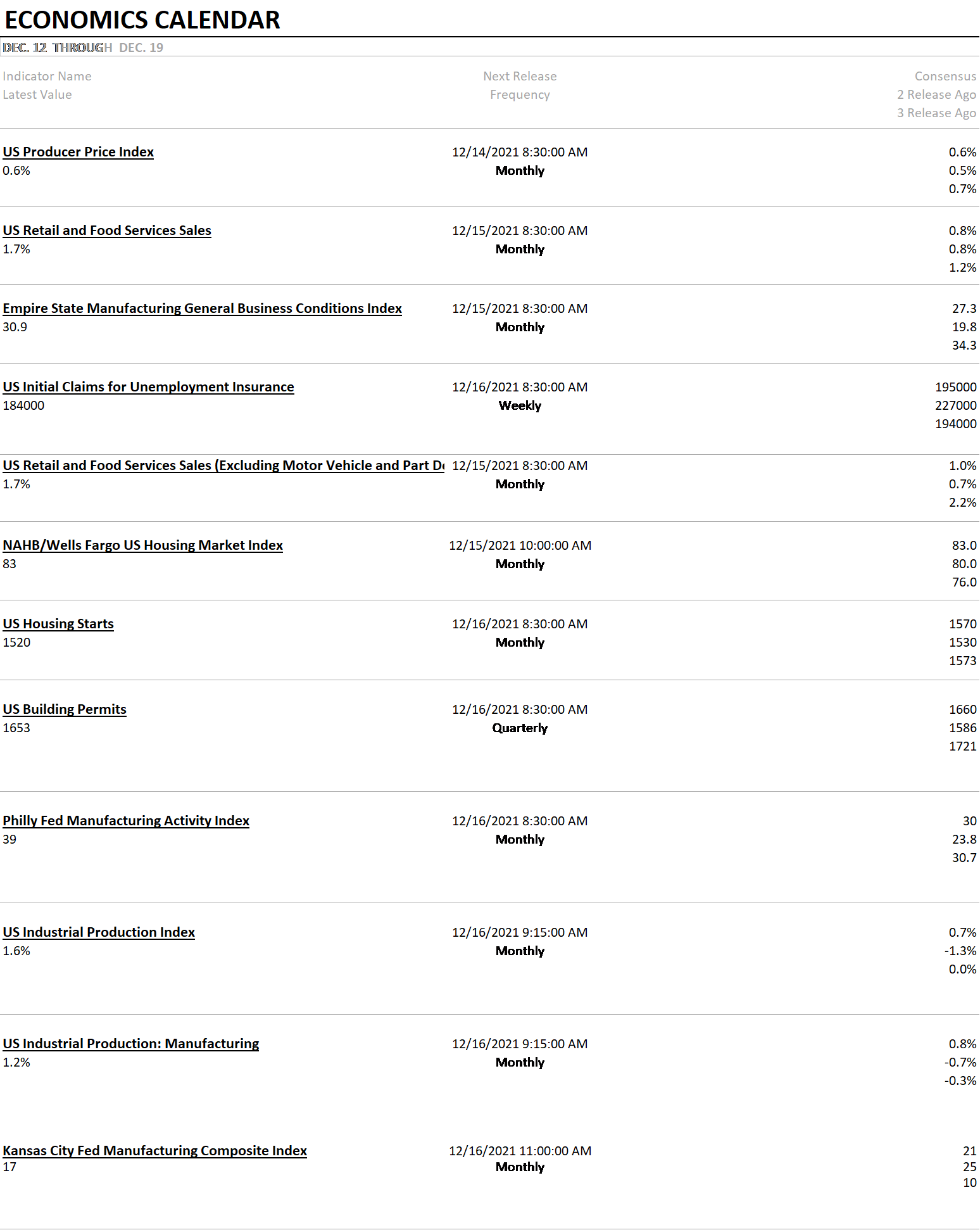 Bonds have been all over the place recently with the nominal 10-year yield peaking the day before Thanksgiving and falling 35 basis points over the next 6 trading sessions. Last week saw yields rise 15 basis points and get some of that back.

Commodities rebounded last week and continue to be the best performing of the asset classes we normally follow. Crude oil led the way, up 8.2% on the week. 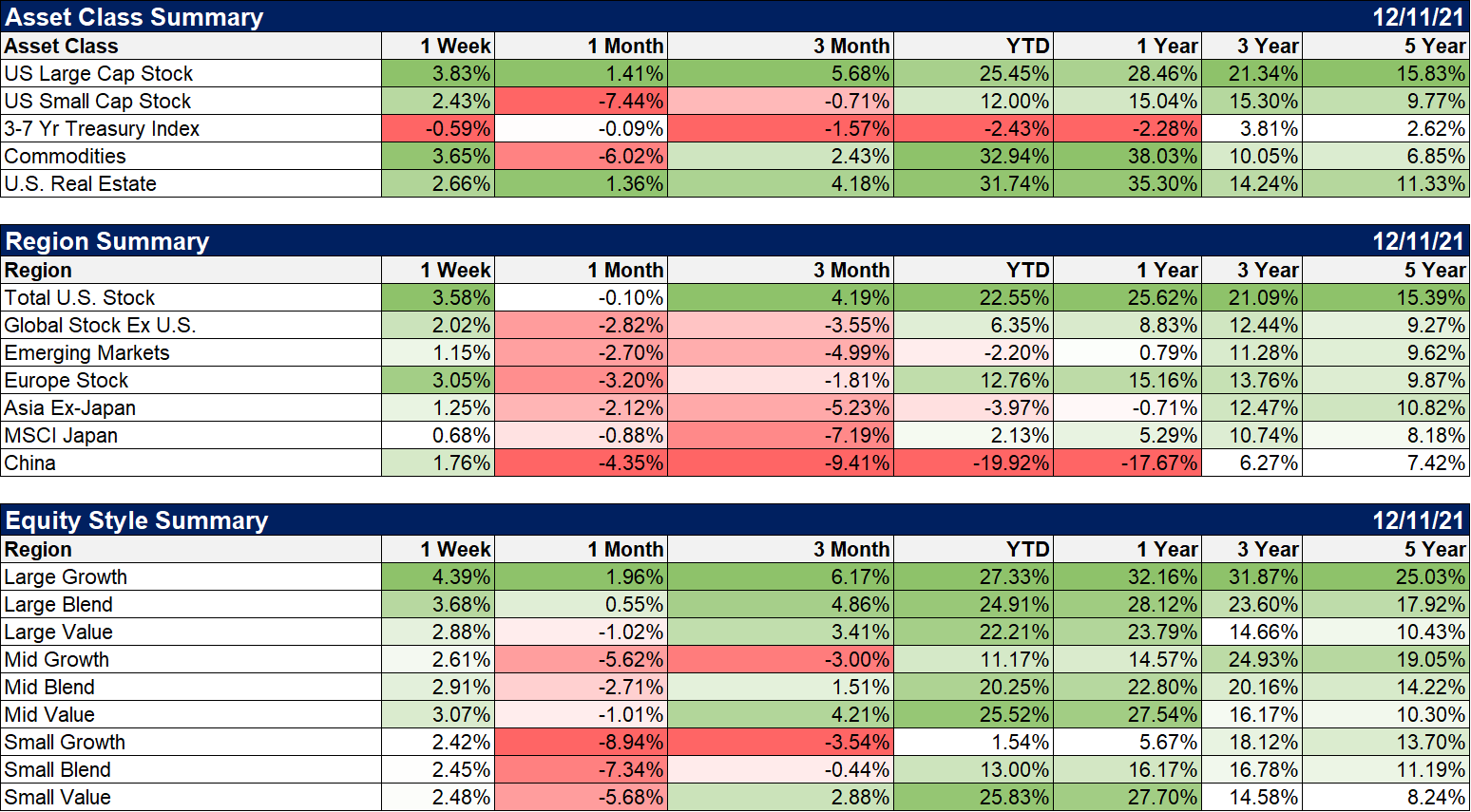 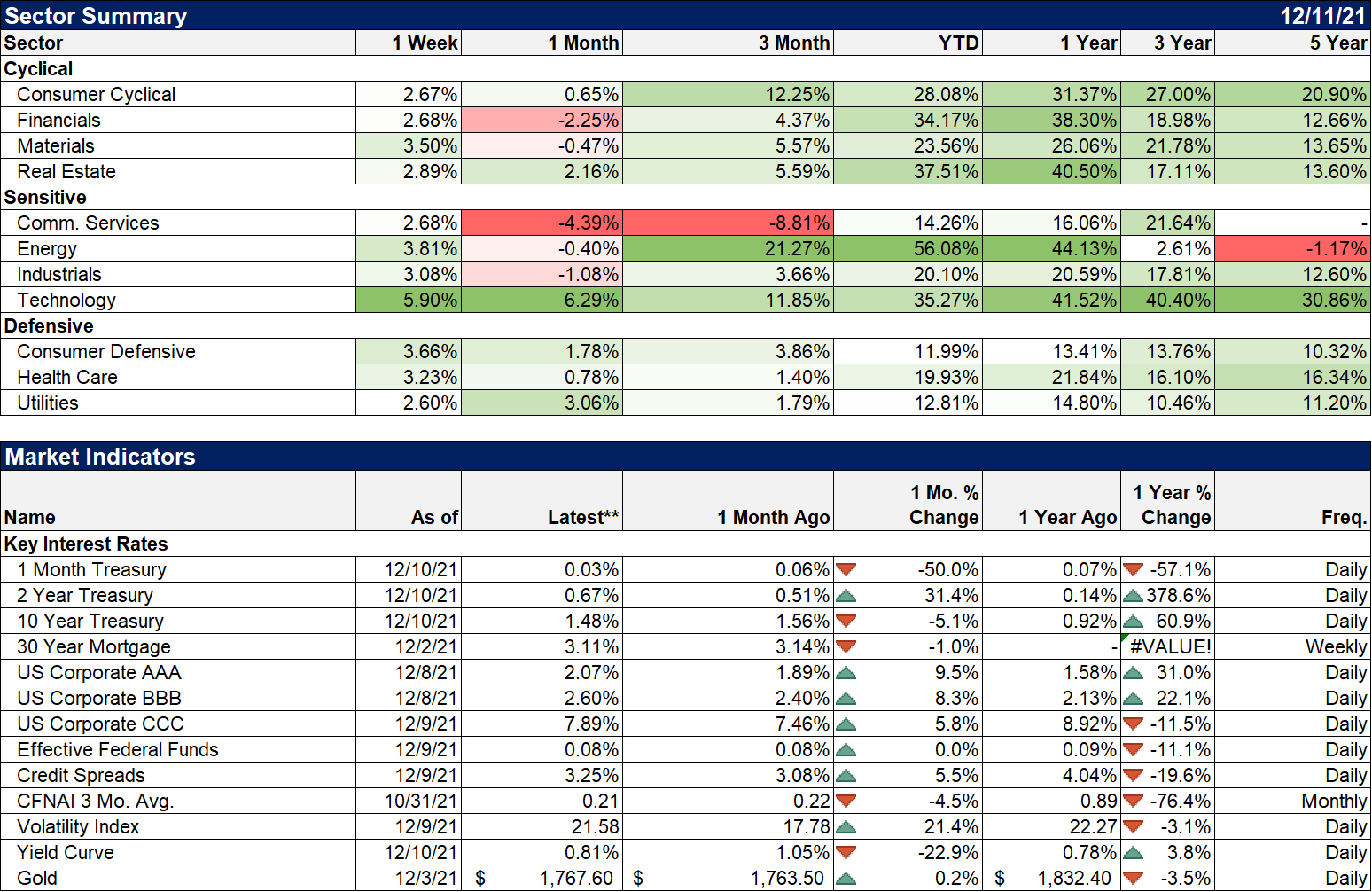 Happy Holidays to all our readers! We really appreciate you reading every week and providing so much great feedback.