In individuals, insanity is rare; but in groups, parties, nations, and epochs, it is the rule.

The new year got off to quite a bang last week. It was almost as if someone flipped a switch and investors/traders suddenly decided that all that stuff they believed last year was just so passe. Growth stocks? Nah, who wants those? Crypto? Are you frigging kidding me? Inflation? No, that’s past its prime. Bonds? Not only no, but hell no. TIPS? Don’t need those anymore. REITs? With interest rates on the rise? I don’t think so. Of course, some things never change; gold is still lonely and unloved. The dollar still has some fans but they aren’t as rah, rah! as last year. More like just – sigh – rah. And energy, well, those guys are still the life of the party; the world may be going electric and green but somebody has to keep things running until they perfect that fusion generator or at least a better battery.

The “wisdom of crowds” is the idea that large groups of people are collectively smarter than any of the individuals that make up the crowd. And usually smarter than the “experts” who are tasked and paid to make prognostications. But as Nietzsche observed, there can be a whole lotta crazy in crowds too. I could offer any number of examples from modern times that make the Salem witch trials, the South Sea Company, and the tulip bulb bubble all look sober and sane by comparison. I’ve had a career that encompasses at least three big manias and a whole raft of smaller ones that aren’t worth mentioning. For investors of a certain age – that would be my age, 60 – manias or bubbles or whatever you want to call them are normal. I saw the bull run and crash in ’87, the late 90s dot com delusion, the liar’s loan housing bubble, and now the crypto/web3/NFT/metaverse/SPACapalooza and wonder how I ever thought crowds had any wisdom at all.

What’s amazing though, is that despite all those times the markets got it wrong, they still get it right a whole lot more than the folks paid the big bucks to guess the future. I don’t know what motivated the big moves in markets last week; I can’t get inside the minds of everyone trading these markets. But there were some big and surprising – because big moves are always surprising or they wouldn’t be big – changes in markets last week. Large-cap value stocks outperformed large-cap growth stocks by nearly 6%, small-cap value outperformed small-cap growth by over 6%, the 10-year Treasury note yield was up 17%, the 2-year note yield was up 19%, the yield curve steepened by 13%, and the 10-year TIPS yield rose 32 basis points even as crude oil and natural gas rallied nearly 5%. The market fairly screamed last week that the economy is or will be soon better than was expected just a week ago by a pretty fair margin. And I don’t know of a soul who predicted any of that.

One interesting asset that didn’t move last week was the US dollar, which is a bit surprising. One would expect rising US growth expectations to be positive for the dollar unless Europe and the rest of the world suddenly started looking better last week. Since the latter seems improbable at least, maybe it is the falling inflation expectations that were more important. If inflation has peaked – if it really was transitory – that would imply that the Fed’s recent hawkish tilt is perhaps a bit too raptor-like and maybe 4 rate hikes in 2022 is as ridiculous as it sounds when you say it aloud. And that might easily explain the dollar’s reluctance to join the rise in rates.

What we don’t know yet is whether the moves of last week are durable, whether the optimism of one week means anything. My colleague Jeff Snider wrote last Friday of the move in rates and likened it to what happened in October of 2018 when rates hit, at the time, a seven-year high. The 10-year yield peaked the next month and a mere 18 months later, COVID hit and finally put us in recession. Whether Jeff turns out to be prescient will depend on what the yield curve does from here. I don’t have any idea whether it will flatten or resume steepening as it was until March of last year. If the moves of last week prove to be the beginning of something, I’d take the over especially if inflation really has peaked. Of course, omicron may yet change things for the worse – China isn’t doing the endemic thing so the supply chain may still be a bit kinked – and then all of last week will have just been one big head fake. Break out the popcorn because this one is going to be interesting.

The rotation out of growth and into value is not, as it seemed last week, a new trend. I just put out a year-end piece last week that touched on that very subject (you can download it here). Value outperformed growth last year in small and midcaps; it was only large-cap growth that outperformed and that changed last week. I would recommend not getting too excited yet though because we’ve seen this movie before. Since 2009, there have been four separate roughly year-long periods where large-cap value outperformed large-cap growth. And each time, growth went on to make new highs relative to value. Until recently when the difference in valuation – on a global basis; this isn’t just a US phenomenon – reached an all-time high. It may be that this is just another one of those brief episodes. Frankly, if economic growth goes back to the pre-COVID trend, it would be hard to bet against growth stocks, especially after so many of them have been taken to the woodshed.

Whether value continues to outperform could depend, too, on what the dollar does from here. Value tends to outperform in a weak dollar environment and I see some hints that maybe the dollar is peaking here. In addition to a short-term momentum peak, futures positioning shows specs on the long side of the ledger in a pretty big way. I wouldn’t call it extreme but it is obvious that being long dollars right now is not exactly a lonely trade. For now, though, I’m just going to shift the environment from Growth Falling to Growth Rising and Dollar Rising. If the dollar does get in a downtrend, there are a number of assets that benefit from that environment. If it stays strong, we’ll get a chance to buy some of these beat-up growth stocks at better prices. I’d prefer the former but I can live with the latter.

The economic data last week was pretty good despite the big headline miss on the BLS employment report. The bond market didn’t seem to care in any case; rates rose on Friday. That could have been because of the household report, which for the second straight month was much better than the establishment report from which the number of jobs headline is generated. Or it could have been from a pretty strong rise in wages. Or it could have been that the market decided ADP had a better handle on things than the BLS. Personally, I’d go with that last one but maybe that’s just me.

The JOLTS report was again jolting with quits hitting an all-time high although job openings fell a bit. I don’t think the quits rate is telling us what many people seem to believe. This is mostly a low-wage phenomenon with the highest quits rates in retail trade and accommodation and food services. People are leaving those jobs because there are plentiful alternatives with higher pay. That isn’t all of the rise in the quits rate but it is a big part of it. And good for them by the way. It probably isn’t coincidence that those industries with above-average quits rates also happen to be ones in the midst of big changes. This neatly explains, at least to me, why they aren’t willing to match the higher wages offered in other industries.

One last report to highlight is the trade report. Exports hit an all-time high last month and are up 21% year-over-year. The November report showed a drop in goods exports but a larger rise in services exports. Of course, export prices have also been up so part of the yearly gain is nothing but inflation but even so, maybe the rest of the world isn’t doing so badly after all. 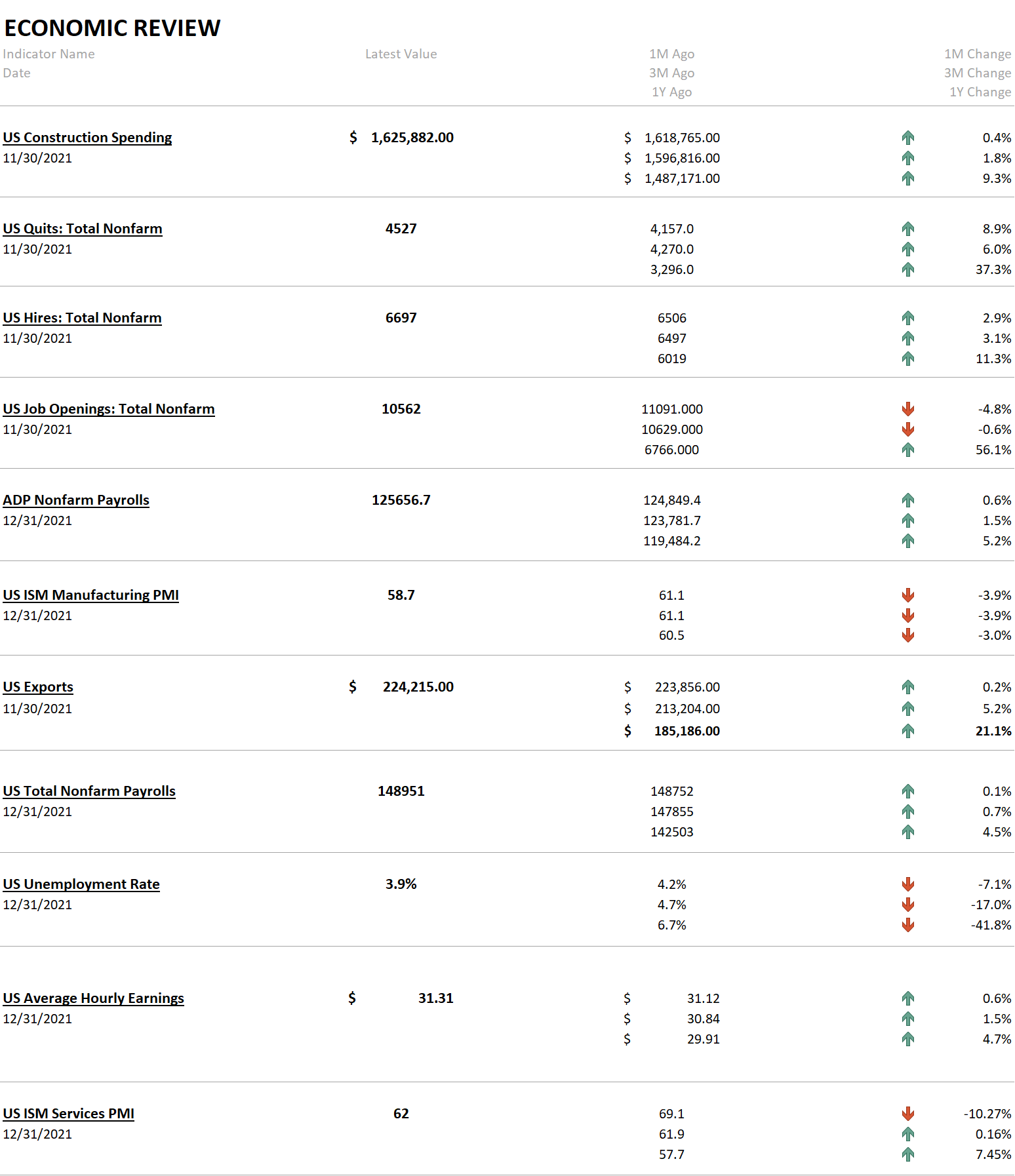 We get a lot of inflation data this week and it’ll be interesting to see how the market takes it. As noted above, inflation expectations have been falling so some hot numbers could offer a surprise. We also get a check on consumer sentiment which should be really interesting in the midst of the omicron tsunami. 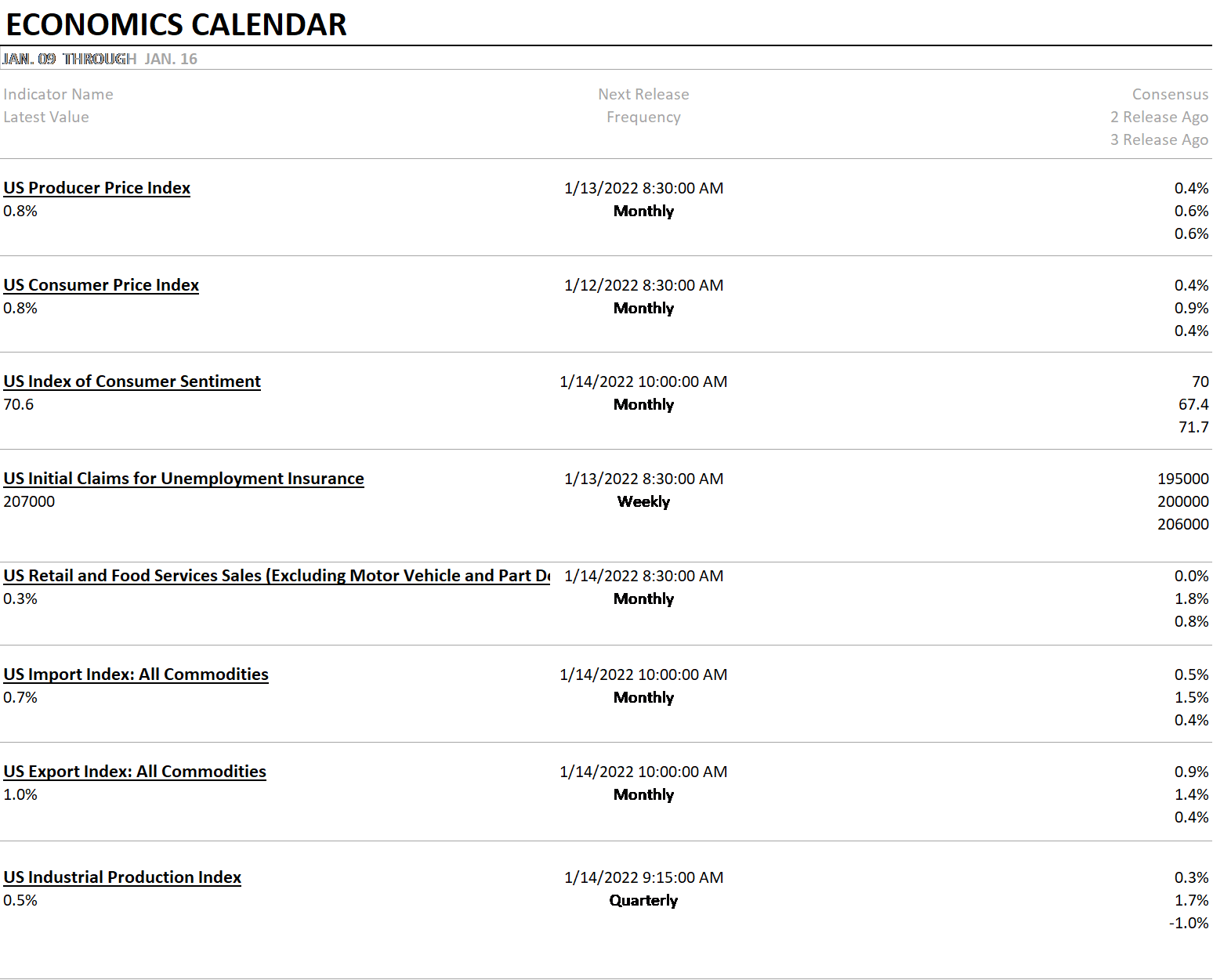 Like I said above, growth stocks took it in the shorts last week. Value stocks outperformed but only large-cap made a significant move up and that was less than 1%. Still a heck of a lot better than down nearly 5% for the growth index.

Commodities were higher on the week as both crude oil and natural gas had big moves up.

REITs got hit hard with rates rising but are still up over 37% over the last year.

Foreign markets outperformed the US but were down on the week. 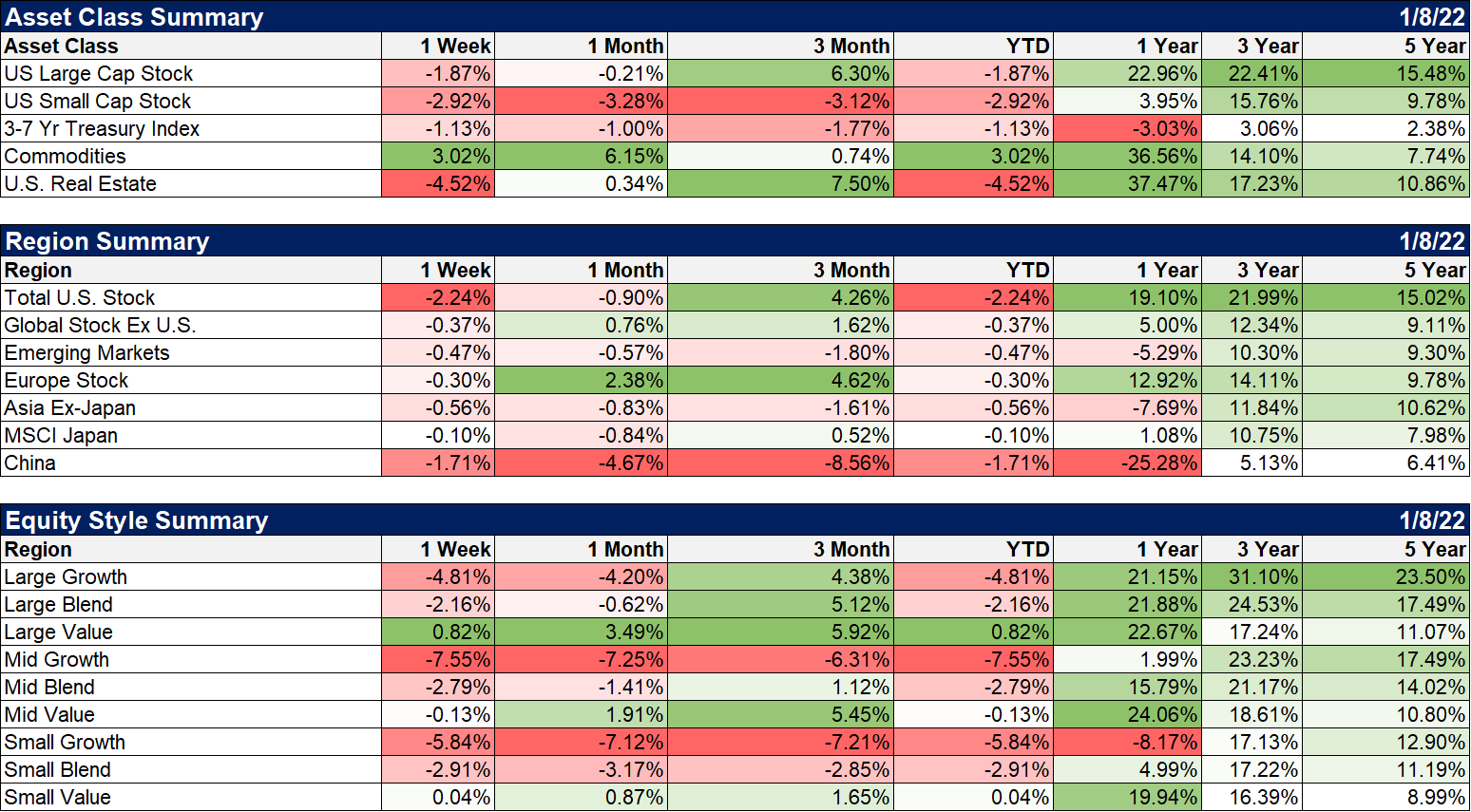 Energy extended its gains from last year and financials loved higher rates and a steeper yield curve. The big growth sectors of healthcare and technology were hardest hit other than REITs. 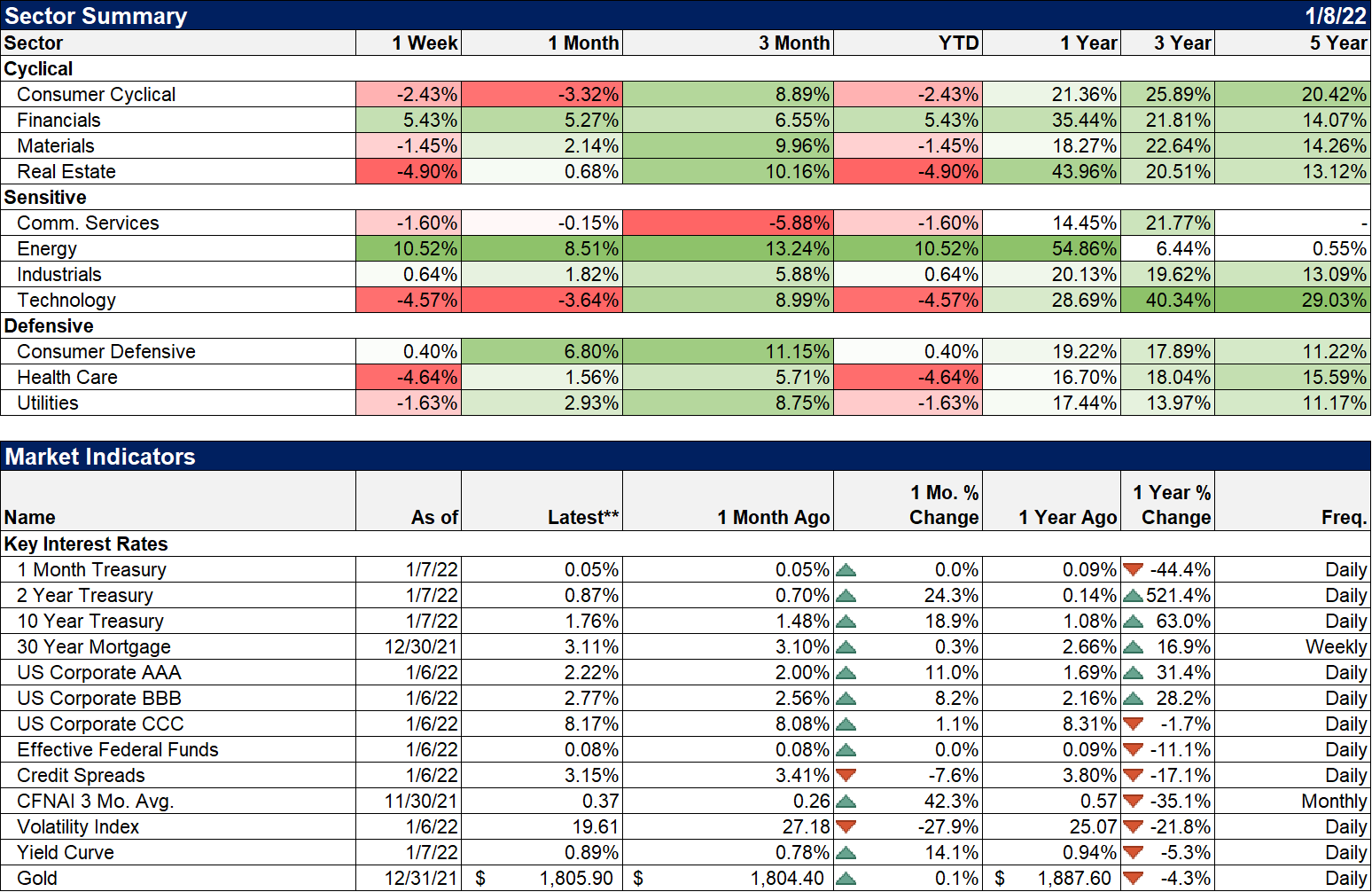 Well, the year is certainly off to an interesting start, in the markets and in the real world. We marked the one year anniversary of the January 6th Capital riot or whatever you want to call it (another great proof of Nietzsche’s quote) and all I could think to say watching the people who participated is something we say down here in the south: “Well, bless your heart.” If you aren’t southern you might not get that, so I’ll just say that it isn’t a compliment. The same phrase applies to all the folks in my industry doing their best crystal ball gazing this time of year. I just want to pat them on the back and say, “Well, bless your heart. Isn’t that nice?” I wrote something too and you can download it here. I promise there aren’t any predictions in it.

Here’s to a great year!