Sentiment v. Substance: Checking In On Collateral Via, Yes, The Fed

Sentiment v. Substance: Checking In On Collateral Via, Yes, The Fed

The Federal Reserve, like other central banks around the world, it does lend out the securities it owns and holds. Sophisticated modern wholesale money markets are highly collateralized, so much so that collateral itself takes on the properties of currency. Elasticity of collateral is as much – if not more – important as elasticity of other forms of wholesale money (therefore excluding bank reserves).

Dealers, however, they don’t much like using the Fed’s Securities Lending operations for several reasons we won’t get into here (in fact, this article is going to be woefully inadequate in addressing these big issues; my purpose is just a bit of background before updating the data for early 2022). How do we know?

For one thing, when the entire collateral system collapsed in late September through mid-October 2008, dealers at most sought to borrow only about $30 billion in securities via SOMA. With repo fails, one proxy of collateral elasticity, upwards of $5 trillion (weekly), the Fed’s Securities Lending operations were a dismal failure.

You could argue that other and newer programs covered dealers, those like the PDCF (Primary Dealer Credit Facility), but given what happened – the worst monetary panic since the Great Depression – and with collateral at the very center of it, it’s more than reasonable to conclude not a single one of the Fed’s efforts bore any useful fruit.

And then there were “abundant reserves.” 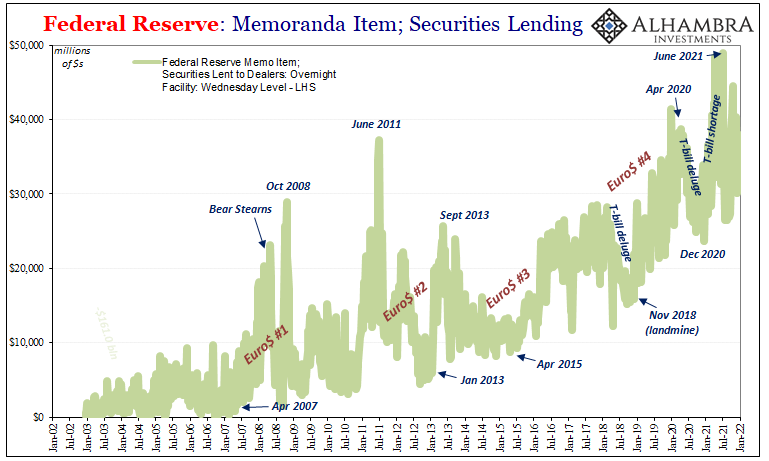 Despite the failure, the data itself is and has been relatively useful if far from perfect. What we find in review is that dealers do seem to come calling to borrow Fed-owned collateral especially at the front parts leading into each subsequent eurodollar, global dollar shortage cycle. More interesting still, though outside of my scope today, those bursts of using the Securities Lending window time accurately to QE’s!

The Fed removes highly useful collateral from the overall market in order to raise the level of useless bank reserves, forcing one subset to go to the Fed seeking to rent a small amount of it back leading up to and into yet another tightening cycle.

One other wrinkle is collateral supply, particularly T-bills especially since early 2018. The TCJA of December 2017 ripped open the fiscal deficit flooding the system with bill issuance that the mainstream tried to make into “too many Treasuries.” What we see here is instead definitive more evidence that actually helped rather than hurt.

Fewer securities were borrowed from the Fed timed perfectly with this 2018 T-bill “deluge.” And still Euro$ #4 came anyway.

To prove the point further, despite a continuing deluge at the start of November 2018 (landmine) the demand from dealers to borrow securities from the Fed surged – just as the far more destructive deflationary impulse systemwide swept over curves and economies alike to begin 2019.

These matched ups and downs continued through the rest of that year (including September 2019’s repo rumble) and into GFC2 2020. Rising activity in Fed Securities Lending correlated closely with occurrence as well as intensity of global dollar shortages. 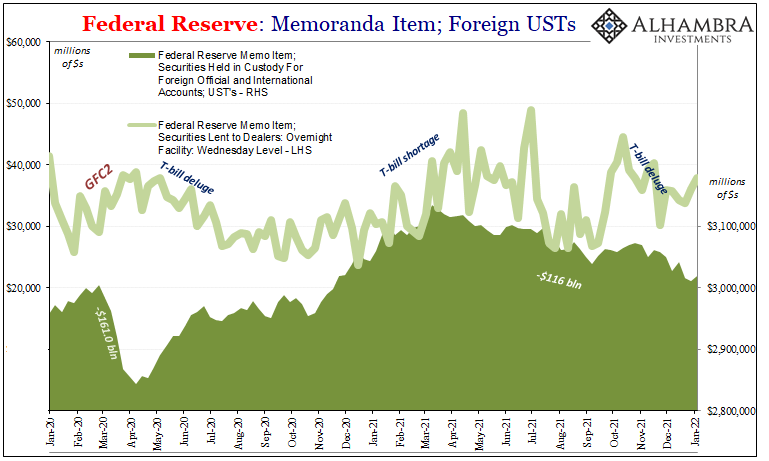 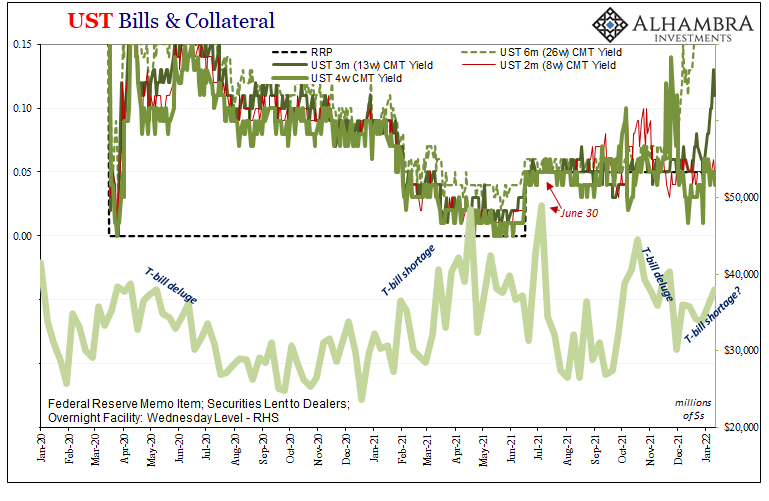 Early April 2020, another T-bill deluge which, like 2018’s, helped rather than harmed as this was almost certainly a key if inadvertent cause of the crisis’ reverse (it sure wasn’t QE and piles more of inert bank reserves).

But then, Treasury having learned nothing and prioritizing debt ceiling politics, the early 2021 T-bill scarcity which coincided exactly with falling bill yields as well as rising dealer securities borrowing with the Fed.

There was even a correlation in early July as I had pointed out at the time; RRP use fell off to begin Q3, bill yields normalized (moved to and above RRP rate) briefly and here again the Securities Lending activity declines materially.

Late in 2021, another T-bill deluge in mid-October; same as before dealer demand for Fed-owned collateral drops off.

This leaves us with late 2021 and early 2022. Judging by bill yields (basically we’re left with the 4-week and 8-week; the 3-month is now factoring rate hikes), the end of last year was money and collateral tight with yields on those bill issues falling substantially below RRP. This matched wider yield curve flattening as well as deflationary pressures showing up in markets like oil.

To begin 2022, however, those bill yields moved back up and suddenly the world seems a much less pessimistic place; TIPS real yields spike, nominal Treasury notes and bonds do, too, etc. Did the collateral problem just go away when last year ended?

By the Securities Lending window, it wouldn’t seem so. Nor by other measures of collateral/foreign (euro)dollar availability. These Fed memo items indicate that whatever popped perhaps more optimistic to begin this year isn’t something that has followed through in the deeper money mechanics of the shadow system. 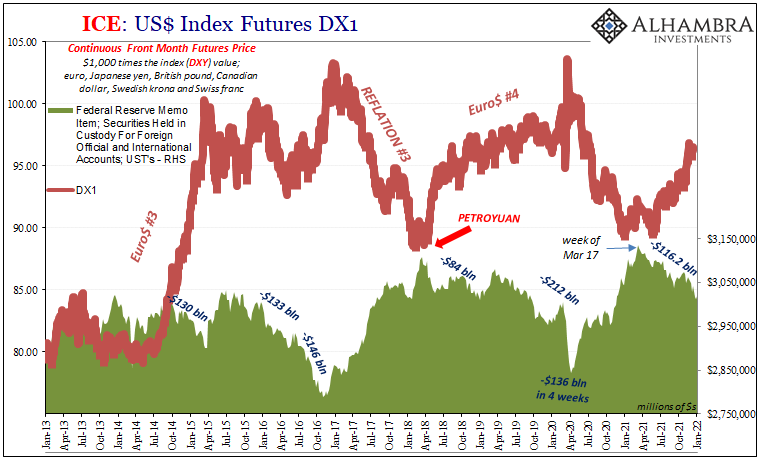 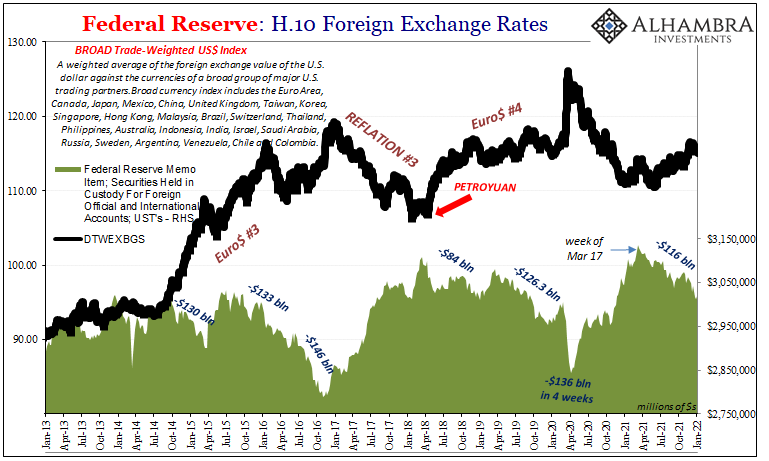 Perhaps this point emphasized in the shortest run today with bill yields falling under RRP again and the yield curve flattening leaving the media without its desperately sought “highest yield in years” headline for at least today.

It will be interesting to see if, by Wednesday’s Fed data, the Securities Lending balance follows suit with higher dealer demand at what is already at an elevated rate historically.

Much has changed since October 2008, of course, but if dealers were only opting for $30 billion in Fed securities back then, what are we to make of $44 billion in collateral borrowing yesterday?

Omicron fears faded as December drew to a close, but as January drags on we might just find that it hadn’t really been omicron depressing rates and curves around the world. There do seem to be much bigger problems, still, especially when it comes to collateral even if this corona relief extends further into the year. Sentiment may be better because of it, as front bills were for a couple days, yet all the while nothing substantial seems to have changed.

Thus, one part of what might become the fifth conundrum. Counterintuitively, most bill yields (3-month and out) rise because they are also money equivalents to the Fed’s RRP and IOER as those are expected to get hiked, while at the same time LT note and bond yields resist the rise due to what’s underneath those front bills in terms of potential collateral undoing and how this could realistically trip up the global system. Again.

As if there isn’t enough crazy to go around. 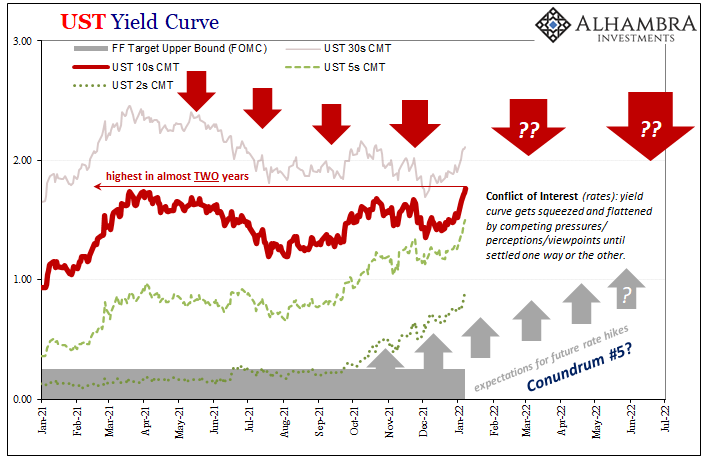