Retail sales stumbled in December, contributing some to the explosion in inventory across the US supply chain – but not all. Inventories were going to spike even if sales had been better. In fact, retail inventories rose at such a record pace beyond anything seen before, had sales been far improved the monthly increase in inventories still would’ve unlike anything in the data series.

And now those inventories have been revised upward. 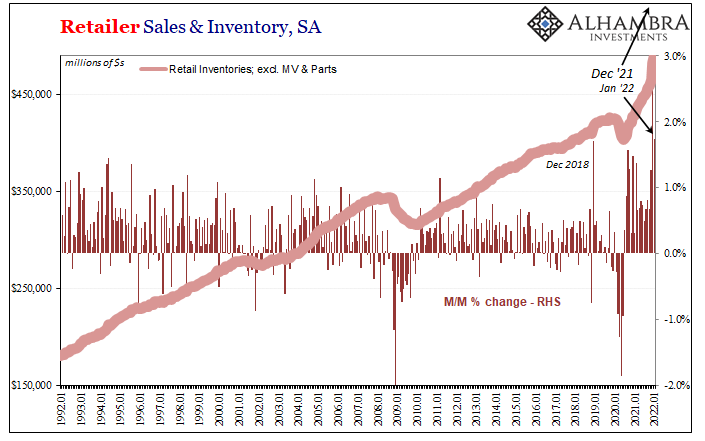 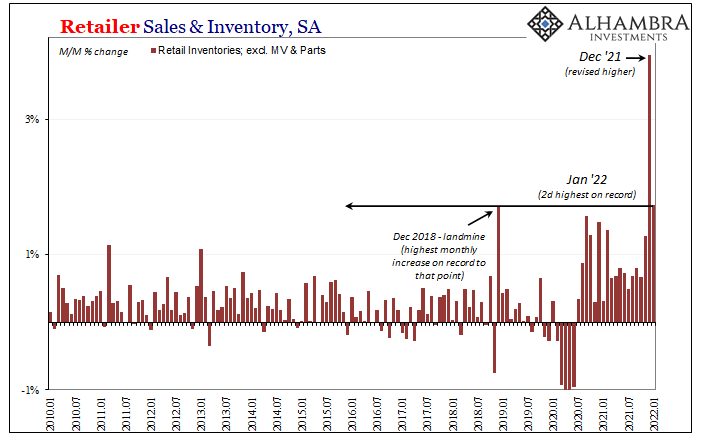 While so, the more concerning result in the Census Bureau’s advanced estimates for January 2022 is how retail inventory surged higher yet again. Though retail sales rebounded substantially from December’s drop, this latest monthly (seasonally-adjusted) increase was the second-highest on record anyway (just beating out December 2018).

Companies have said they intentionally over-ordered just to make sure some amount of goods got through all the various transportation bottlenecks. They’re absolutely getting it now. 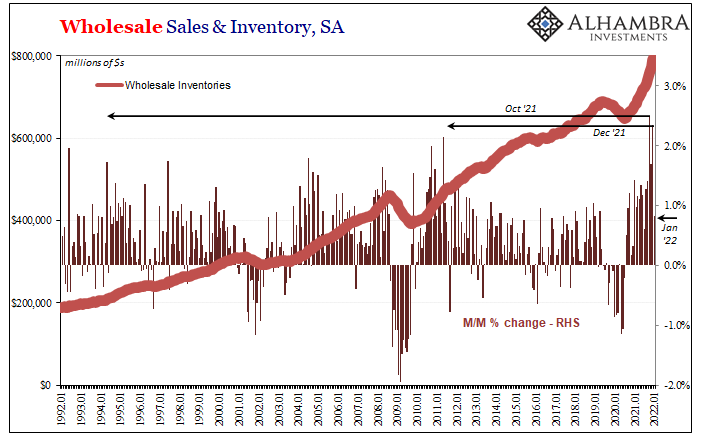 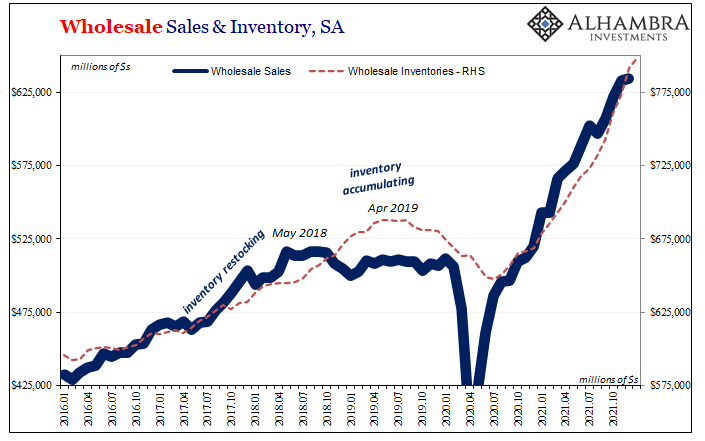 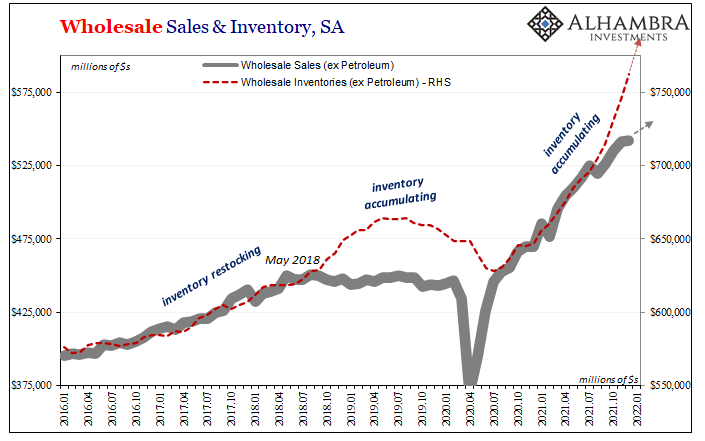 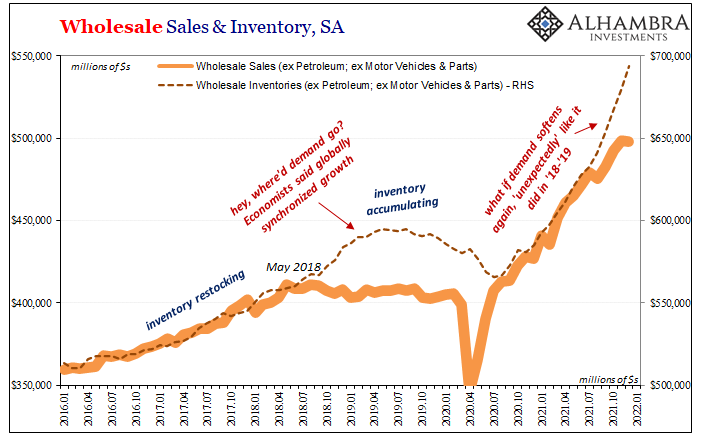 The lone bright spot may have been wholesale inventories; and I write “may” only due to the fact that January 2022’s monthly increase was merely “normal” in the pre-2020 sense of it. The change in total wholesale inventory (by value) from December was “only” 0.83% rather than the record highs piled up in these parts two of the prior three months before January.

Regardless, inventory even on the wholesale level is now accumulating significantly faster/higher than sales (note: the advance estimates for January don’t include the component nor sales categories; only last month’s estimates for overall wholesale inventory has been included for January, everything else is through December 2021).

And where is all this inventory coming from? It was stuffed into the import channel, making the transportation/logistics situation that much worse than it had already been. No wonder consumer prices accelerated throughout the last three months of last year despite even bigger inventory builds. 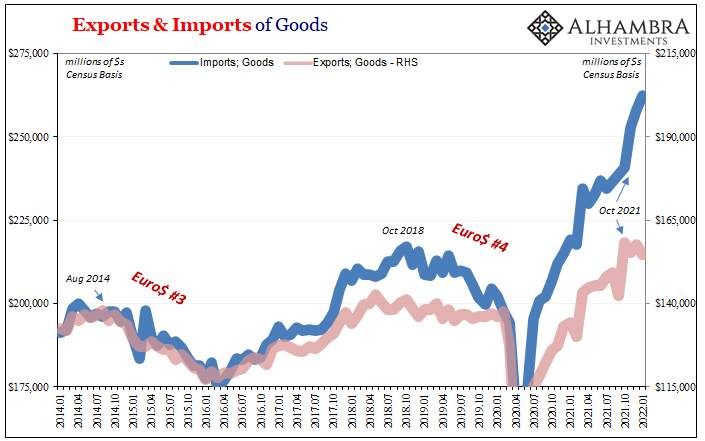 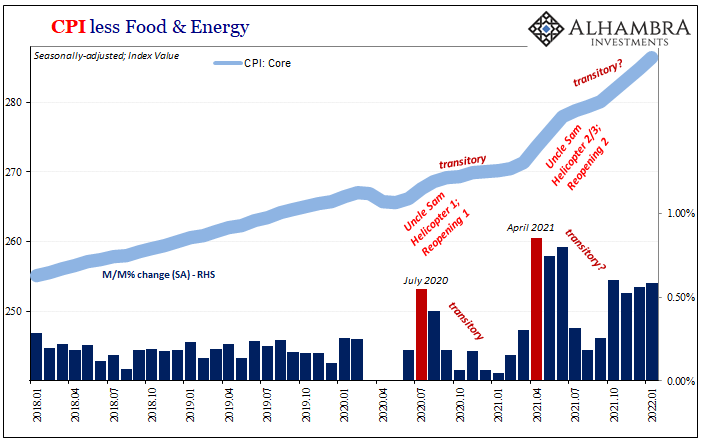 So many goods previously ordered got shipped and even delivered. That didn’t stop in January; on the contrary, the seasonally-adjusted number for goods (even roughly accounting for price changes) surged over the final quarter to 2021 (“saving” Q4 GDP). By Census’s estimation, the total value of goods imported after September up to and including January surged by 9.9% (raw change, not per year).

Over mainly those same months, however, US exports went the other way. They are up slightly in January (values) compared to September, but down when compared to last October.

This represents another economic account which suggests the global economy – outside of double-ordered and slow-transported US goods – may have cooled off to some non-trivial degree since that particular month. 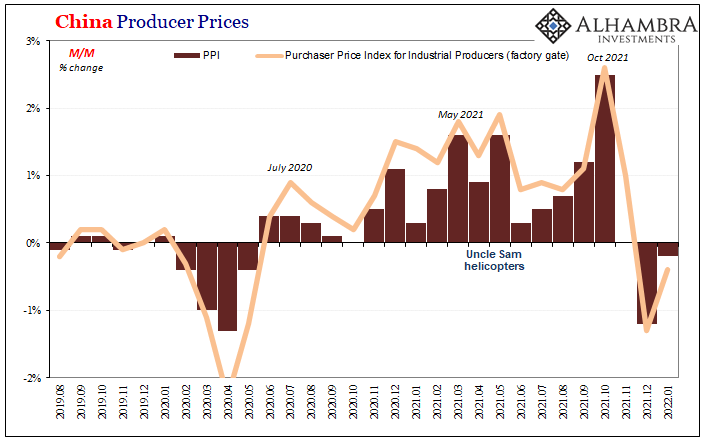 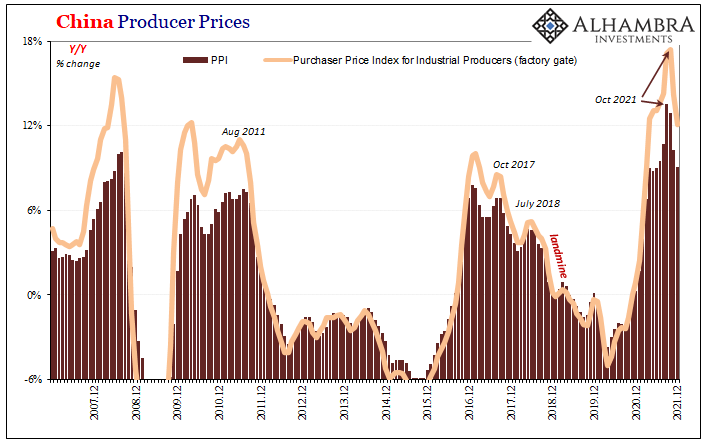