Remember the summer slowdown? Not last year’s, the first one. Back around July and August 2020 when what was supposed to have been a V-shaped recovery fell way off that trend. Instead, blamed on something with COVID, the US (and global economy) limped its way toward the end of that year just in time for its sugar-rush restart via helicopter.

Twenty-twenty’s summer slowdown was in all the data. It’s in one fewer now. 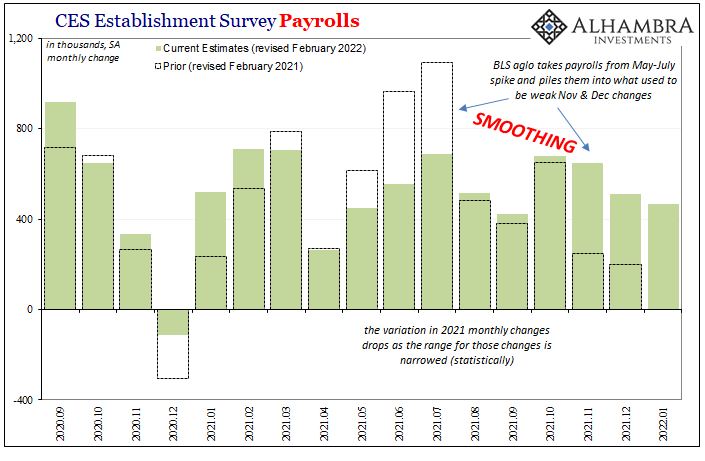 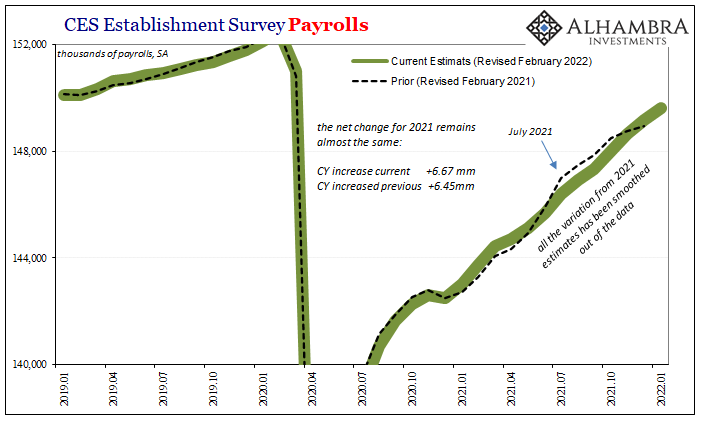 When the BLS revised (benchmarks) its CES (Establishment Survey) last month, you could at least understand the purpose and the underlying theory, even if you never fully agree with the reasons why the government says short run employment changes must be largely free from large variations. Method to this madness, in other words.

Last year, 2021, on the other hand, the BLS shifted some of the larger increases mid-year and shoved them into the smaller gains which had been figured for more recent months. The result was a much smoother trend, yet one that didn’t change about where the employment situation actually ends up.

The Household Survey, that was another story entirely.

ADP, in their just-released revised benchmarks, well, see for yourself: 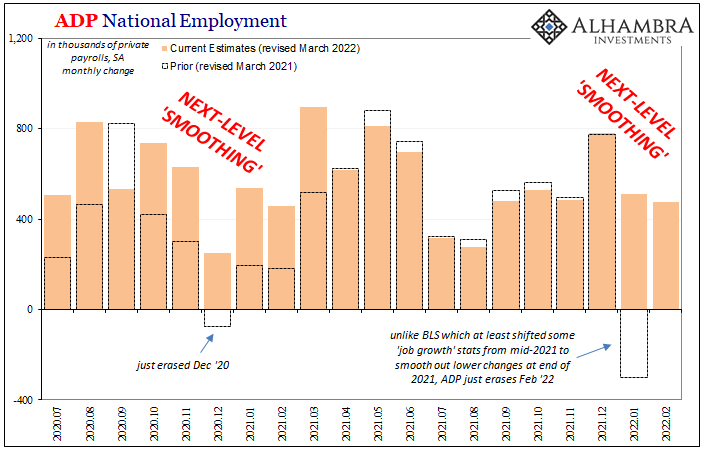 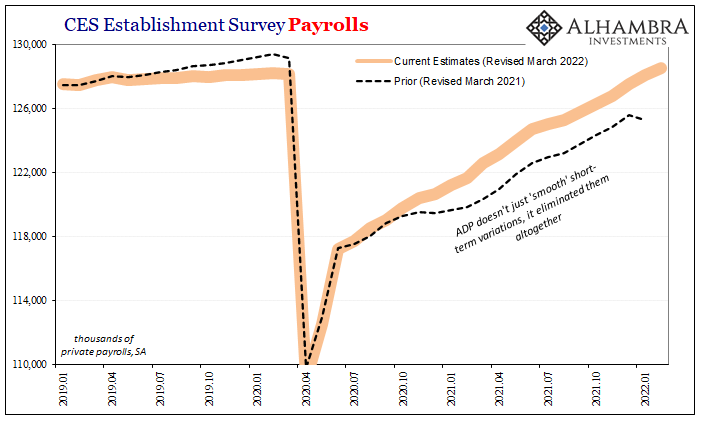 Here’s the thing, though. The company wasn’t smoothing data by taking gains from mid-year last year to puff up some of the lesser months closer to now, including January’s ugly big minus. On the contrary, ADP just erased all the low months over the past two years.

Summer Slowdown 2020? Gone. Erased. This is some next-level “smoothing.”

And the problem is, basically, the Household Survey’s revisions which were based on the 2020 Census. The latter found more Americans than previously thought, and more Americans in the specific middle age bracket where more of them tend to be working. The government didn’t find more workers, mind you, it just calculates, statistically speaking, there was probably a higher participation overall because of the population adjustments.

But the BLS doesn’t go back and reproduce past estimates; they just leave that massive discontinuity sitting there forever forward. 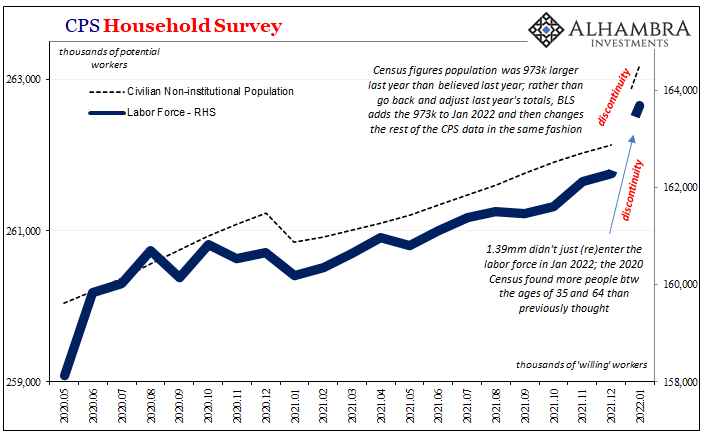 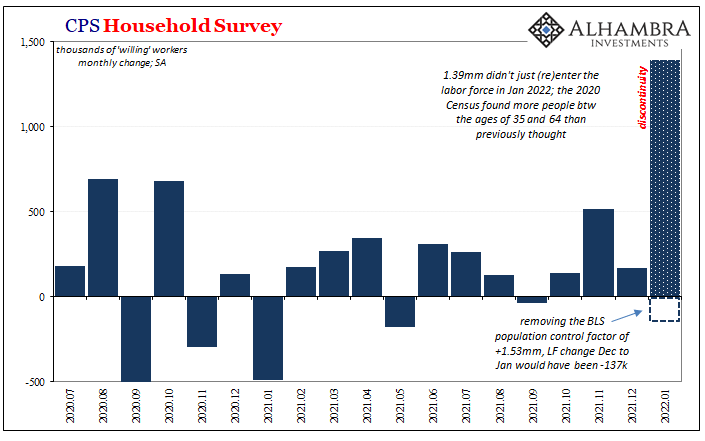 What appears to have happened with the ADP figures, then, is that to avoid such a major break, a huge discontinuity, the company has instead revised backward to reverse-engineer this new benchmark closer (actually way above) to where the Household Survey now is. The only way to do that, or the only “properly” smoothed way to do this, would be to pretty much eliminate all the weak months from the 2020 trough through today – including what ended up being a disjointed 800,000-payroll adjustment for February 2022.

Since we’re on the subject of benchmark adjustments, you know what that means (below). I’ll let the revised data speak for itself (while I go scream into a pillow or something).

As always, keep these years-later “discoveries” of seriously weaker data meaning reality in the back of your mind as Jay Powell’s FOMC once more tries to make the labor market into his centerpiece of inflationary economics. 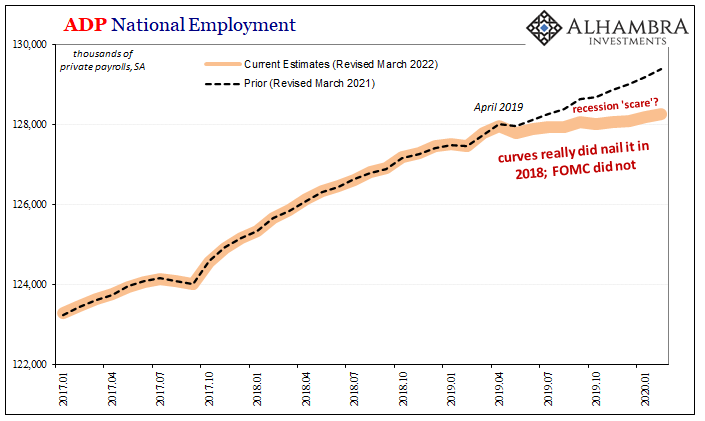 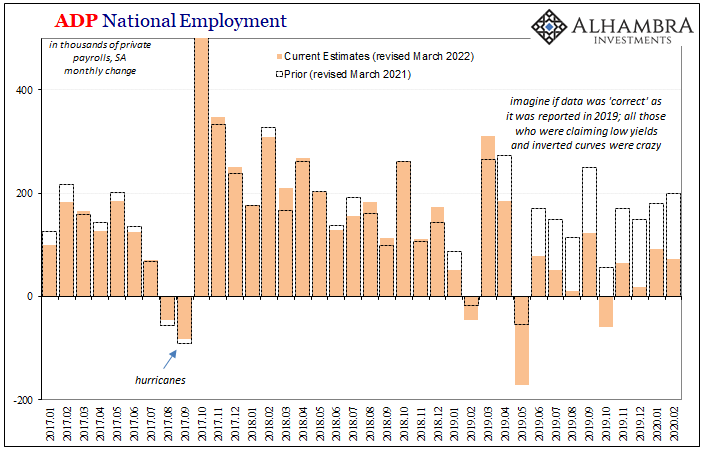