Inversions And Inventory, The Major Products of October

Inversions And Inventory, The Major Products of October

What happened in October 2021? Another year’s Halloween, sure, some beerfest gluttony around the world. For all the happy revelries in that month the financial markets took a decidedly ominous turn. It hadn’t exactly been all rainbows and unicorns in them before then, yet they were at least stable to slightly optimistic about the future for 2022 or beyond.

The list of dark suspects begins with the most obvious: crude oil. The price per barrel leapt above $80 for the first time in many years before that crucially bad 5-year TIPS auction on the 21st. Though these together indicate the original seeds of the demand destruction hypothesis, which has only gotten stronger over the months in between, I don’t think that was the whole inflection.

There’s more to the tipping point and as you’ll see below it wasn’t the prospect for rate hikes.

We’ll begin to piece everything together using eurodollar futures because this was the curve which first sounded the heavy inversion alarm on December 1. Even more helpful, its swing toward inversion was as clear as day, thereby pinpointing the moment(s) when it all started to go awry.

Between early August when the curve had last sunk to its lowest summer depth until early October, eurodollar futures took on the “right” shape; that is, the possibilities of Federal Reserve rate hikes began to reshape the curve. As those did, the shape steepened which was consistent with the idea of the (global) economy being in good enough shape that the Fed’s reasoning for its planned tapering/rate hike combination wasn’t outright ridiculous. 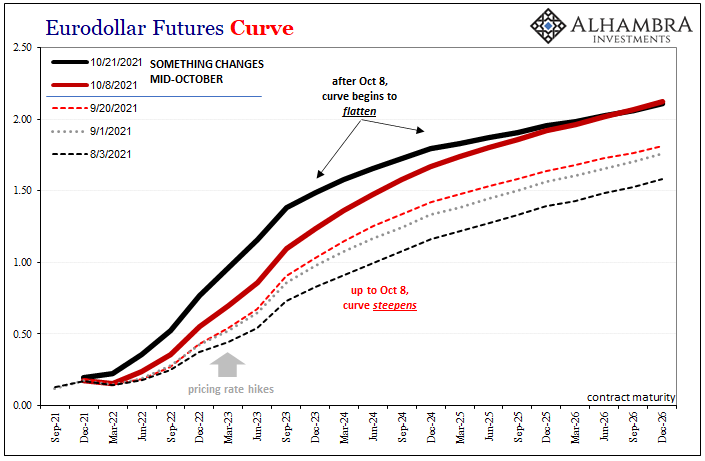 Between October 8 and the 21st, when the TIPS auction was done, the eurodollar curve kept pricing more into future rate hikes but suddenly flatter (pessimistic) toward the back end.

From late October thereafter, the curve would continue to add more to its front end (higher probabilities of rate hikes) yet less and less at the back – to the point the thing flattened out to straight horizontal before the initial kink of inversion on December 1 (below).

So, it wasn’t rate hikes which had changed the character of the curve since those were steadily priced after mid-October as before; eurodollar futures kept getting steeper and steeper up front.

What changed was the back end, the longer run prospects not directly tied to the Fed’s plans (the greens, blues, and golds), and the timing of this change obviously after October 8. You can literally see it transform: 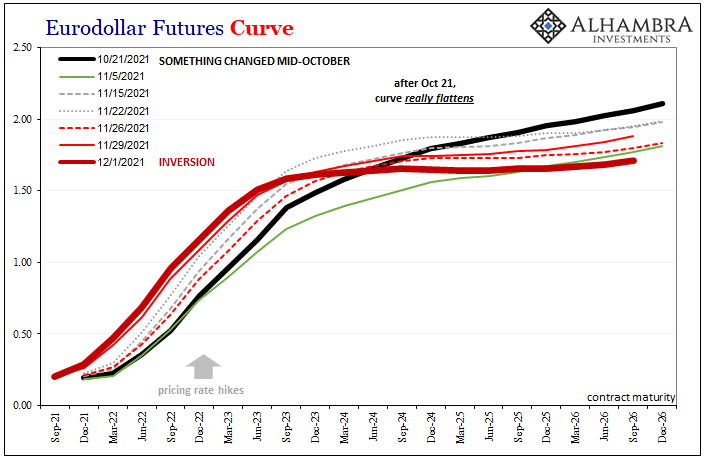 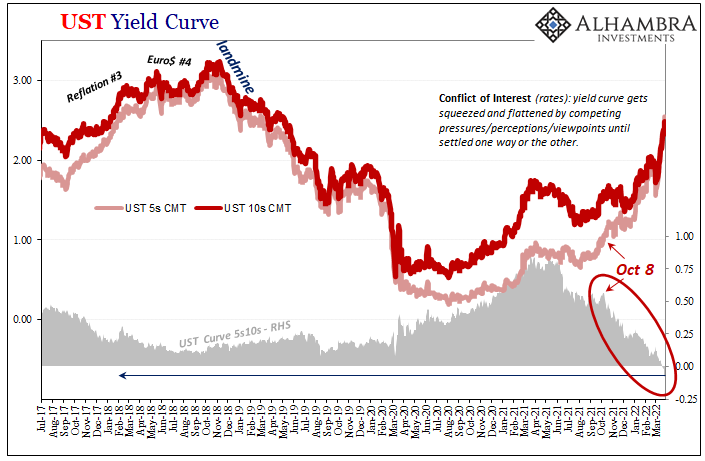 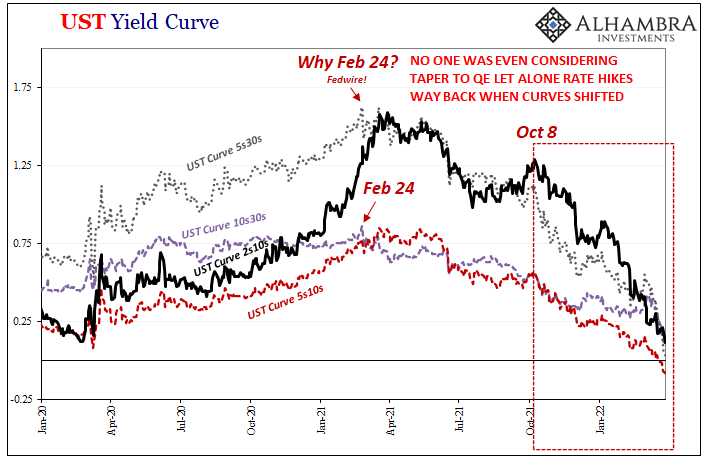 As of today, the 5s10s are upturned by the most since the summer of 2000 (just before the dot-com recession), the 5s30s are just about even and will probably invert in the coming days, the 2s10s (which the public actually knows about) are only a dozen bps apart, while the whole middle of the curve from the 3s to the 10s is upside-down bad.

To my point, it’s been pretty much a straight line from relatively steep around early October to all those.

There’s the collateral case for all these warnings, sure, repo fails, dealers borrowing Treasuries from the Fed, but if it isn’t rate hikes (it’s not) nor just the rising prospects over oil-soaked consumers forced to retrench, what else could it have been? 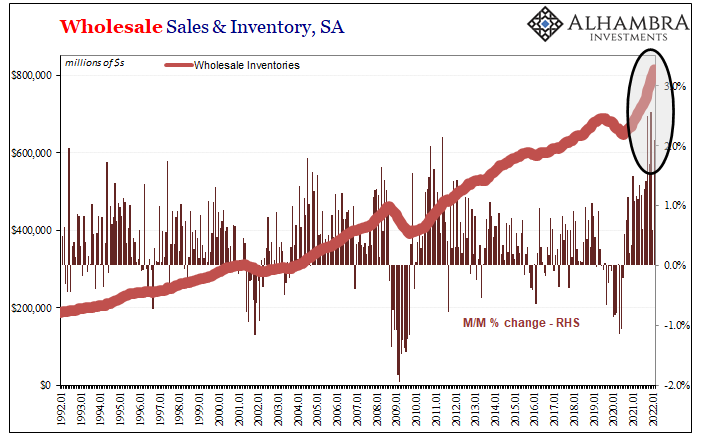 Unbeknownst to most of the global public, Americans for sure, the US goods economy has been the sole positive outlier in the constant ocean of post-2020 weakness. Uncle Sam juiced the domestic demand curve by simultaneously depositing borrowed Treasury cash into the accounts of bored consumers who he had already trapped in their homes.

A flood of mostly foreign goods was requested, though many of those got stuck in the myriad entanglements of other COVID-based “frictions”, raising prices but also the itchy nervousness of suppliers in wholesale and retail positions.

Rather than wait out the logistical mess, and risk missing out, wholesalers and retailers seeing their prices rise so quickly for the first time since 2008 went insane. As I’ve been writing since last summer, they quite intentionally over-ordered, doubling, tripling, quadrupling up on goods just to hope some sufficient quantity made it through the gauntlet of port inadequacies, railroad turmoil, and a “shortage” of truckers whose only fault is that they don’t get paid to wait idle for those others. 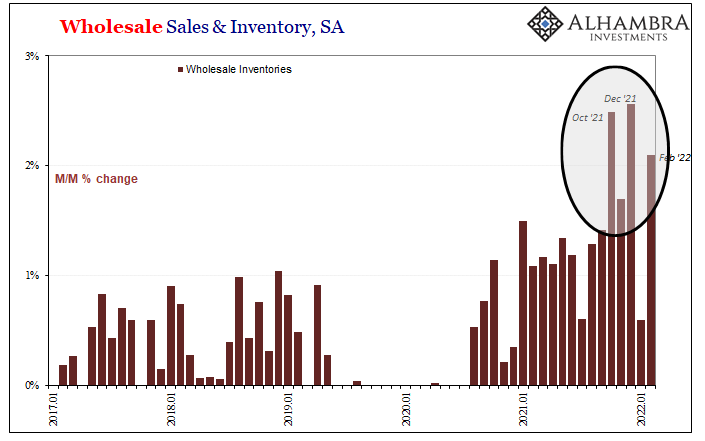 The Fed like the vast majority of Economists told wholesales like retailers to expect miracles from the government’s helicopters, meaning that such “stimulus” would create a positive multiplier of gross sales. Once pushed up, in other words, businesses were led to believe consumer demand would stay up historically high so even if there was so much over-ordering the flood of goods wouldn’t idle in wholesale or retail hands for very long.

This, as it turns out, was a gross misread of the economic situation from the labor market on down; the US economy hasn’t even recovered let alone found its missing high gear. As I wrote above, the goods economy was made artificial from the get-go and has been the lone upside outlier. 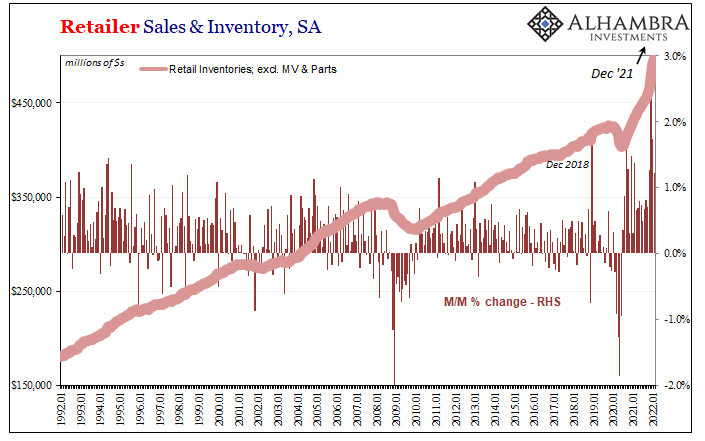 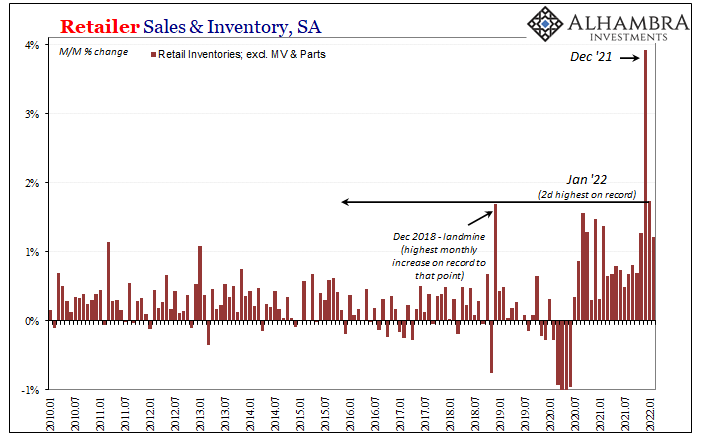 The Census Bureau has shown that – from October 2021 – inventories have been piling up first on the wholesale level and then at retailers in equally historic fashion. For wholesalers, three out of the past five months, including the just-released advance inventory estimates for February 2022, have seen record levels of monthly increases.

Census believes wholesale inventories increased by another 2.2% last month, up almost 20% from February 2021. This also flies in the face of #emptyshelves which has led much of the public to believe there aren’t many goods available at times. There are, they just aren’t moved around as nimbly as they once had.

Retailers found themselves holding a truly massive, unprecedented surge of inventory in December as final sales of goods suddenly fell off. And though retail sales did rebound in January, they were slightly less last month all the while inventory accrual continues at what before reopening would have been record or unusually high paces. 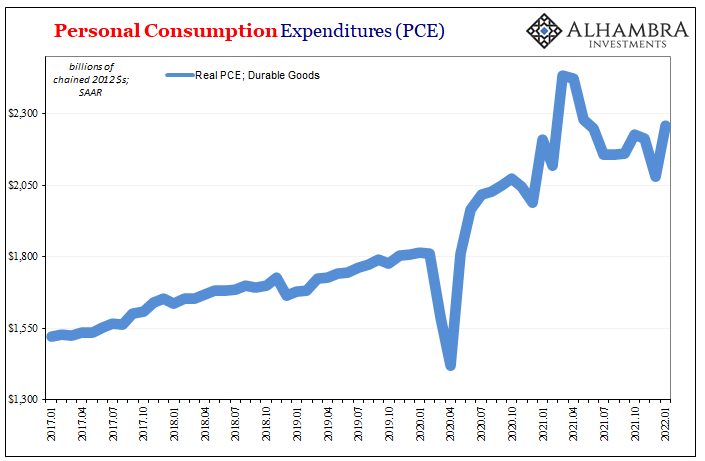 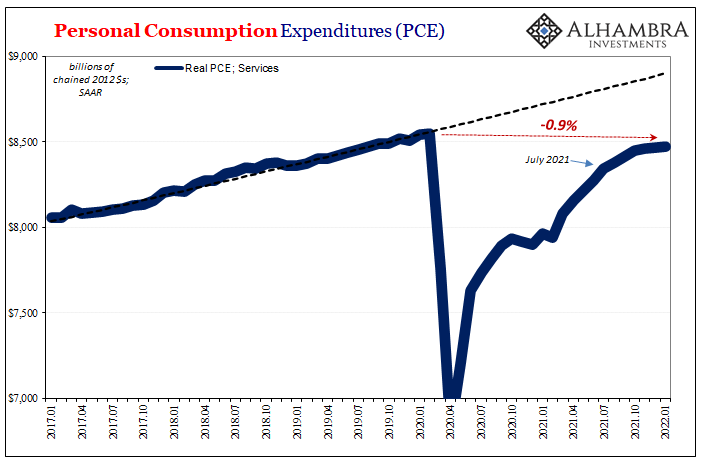 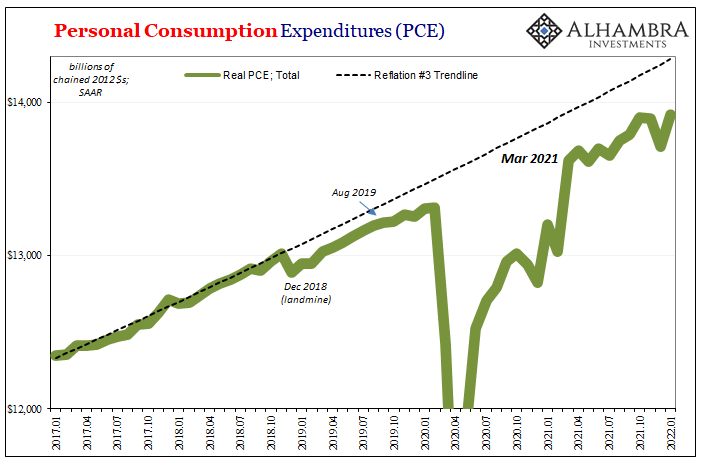 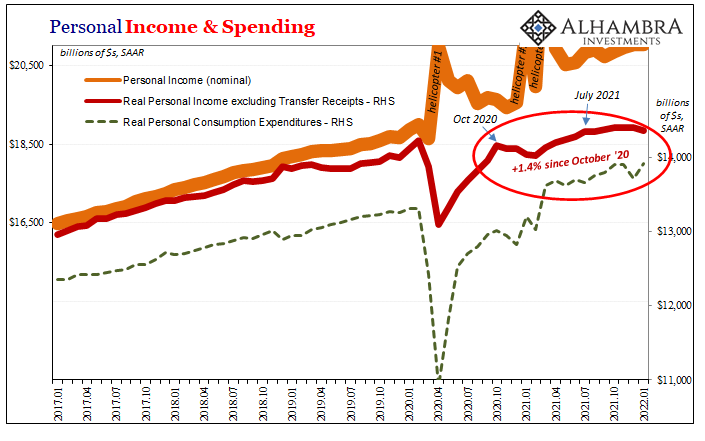 Should these inventory trends better represent the US goods economy’s true potential, it would add another downside straw to a global economic camel already stressed under the weight of those other burdens mentioned above.

And since the US goods economy is, I’ll write again, the lone global outlier, should inventory indeed prove too much and lead to some even modest downturn in goods, the effects across the whole system risks becoming a far more serious blow (to unappreciated weak system) than it should otherwise appear.

There is more potential for this scenario than many would believe from the rate-hike-panic viewpoint.

Market opinion about the balance of risks was transformed back in October, which not coincidentally happened to be when the flood of inventory began showing up. Neither the more pessimistic curved stance nor the buildup of inventory has changed since. A straight line up for inventory accumulation at the same time as the plunge on curves into inversion(s). 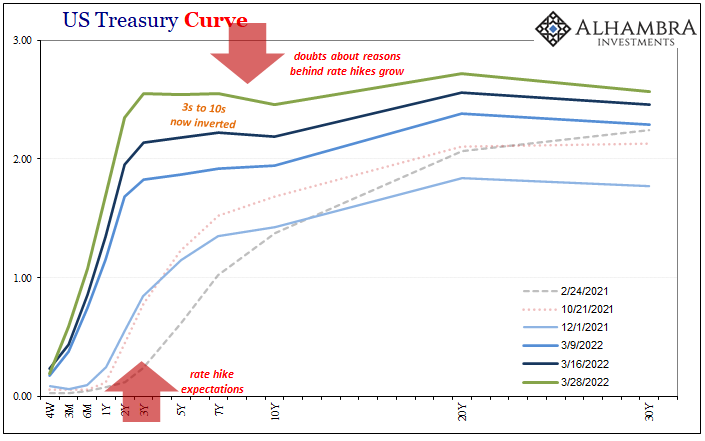