A(nother) Waste of Our Time

A(nother) Waste of Our Time

It’s been a while, but the BLS finally got around to releasing a near-perfect payroll report. These had been incredibly common even during prior downturns and near recessions, which should only raise questions about them. Among any immediate concerns, how relevant can these data points be?

In our current day, like the consumer price data, they’re already old news. That’s not my judgement but rather the whole entire bond market. Whatever the employment figures, curves have only gone further crazy indicating, like at prior times before, we risk paying these numbers way too much attention, mistaking them for a useful summation of the current situation or near-future potential.

I don't mean to get all clickbait-y here, but this sh– is going down.

For example, in January 2016, while the US was in the midst of experiencing what very nearly became outright contraction, the government said payrolls were exceptional during the month of December 2015, the same when Janet Yellen’s FOMC had finally gotten around after confusing delays to their first rate hike.

Unfortunately for her, and the payroll data, none of it meant anything. The economy would continue to tail off to the point even Yellen had to recognize the weakening. She wouldn’t get to rate hike #2 for a full year.

I had written in early January 2016 that:

The payroll reports don’t suggest what is claimed of them on their face; the numbers as they stand currently still don’t add up to a surging jobs market, and even if they did that doesn’t in any way imply that labor growth, as overall economic growth, will continue this next year.

If this is all Janet Yellen has left upon which to base her “overheating”, with GDP no longer at all comforting, then she truly has nothing.

And that was after monthly perfection.

Jay Powell might want to take note of such history (he was there, after all) along with many others like it over the six years since; particular the few more around early 2019. As it is, market curves are already way, way beyond anything of 2016 and 2019.

Insofar as the current FOMC may be concerned, the BLS March 2022 payroll report simply provided them yet more of what they already had. The data was, again, just about flawless top to bottom, with only one small (though maybe growing) exception. 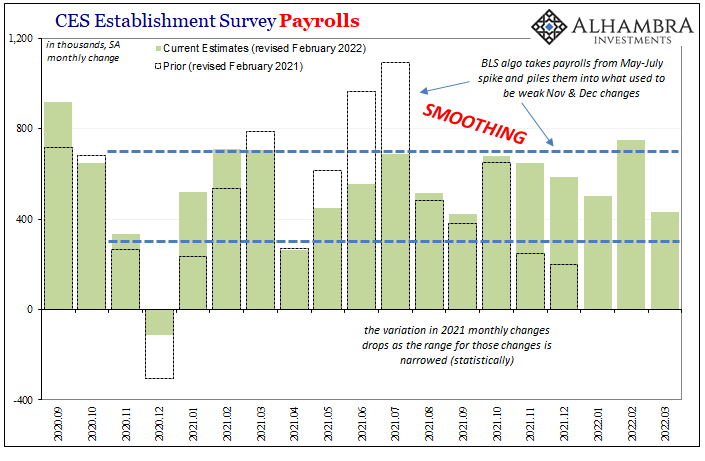 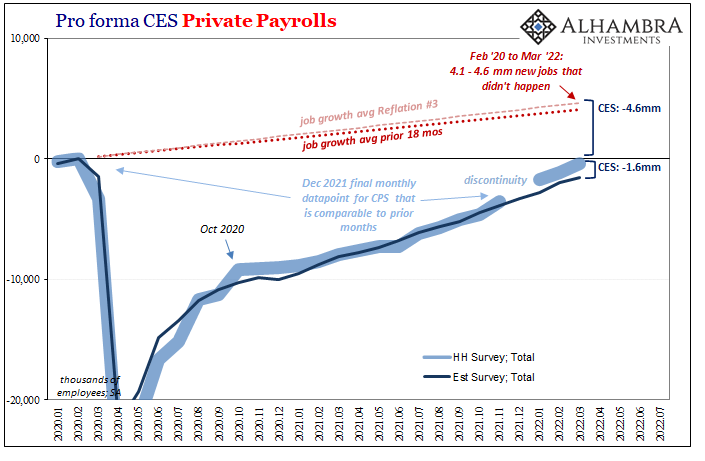 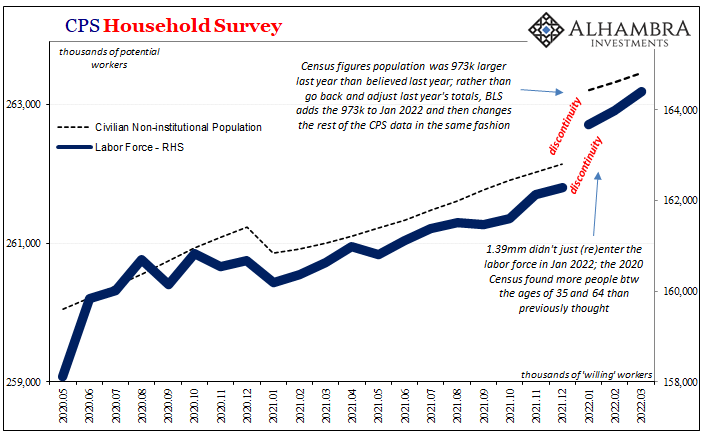 The headline “smoothed” Establishment Survey gained 431,000 last month, a touch on the low side but still well within the series’ predetermined trend-cycle range. The post-discontinuity CPS showed big gains in employment (+736,000) along with a nice increase in the official labor force (+418,000).

Given the latter two, the unemployment rate dropped another 0.2 pts. At 3.6% for March 2022, it’s not only incredibly low (again), the rate at which this rate has fallen only adds fuel to the FOMC’s rate hike panic fire; the unemployment rate had been 5.9% as late as last June, meaning that it has shed 2.3 pts in a matter of just nine months.

If your view of inflation depends mostly on some Phillips Curve-type basis, regardless of the rest of anything the low unemployment rate combined with the speed at which it became so low can only speed up the official hurry to appear to be doing something about these presumed “inflationary pressures.” 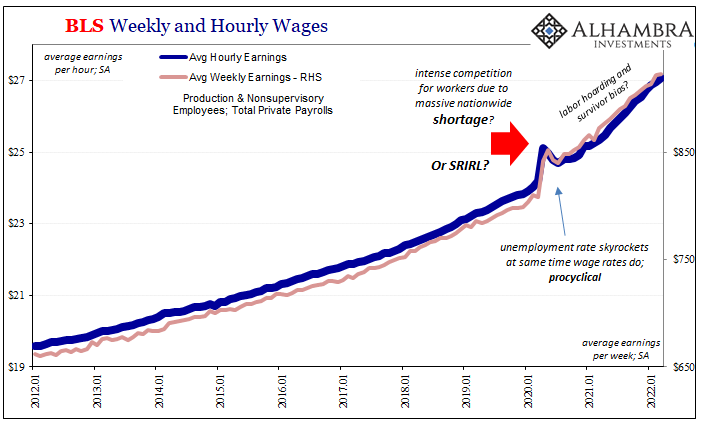 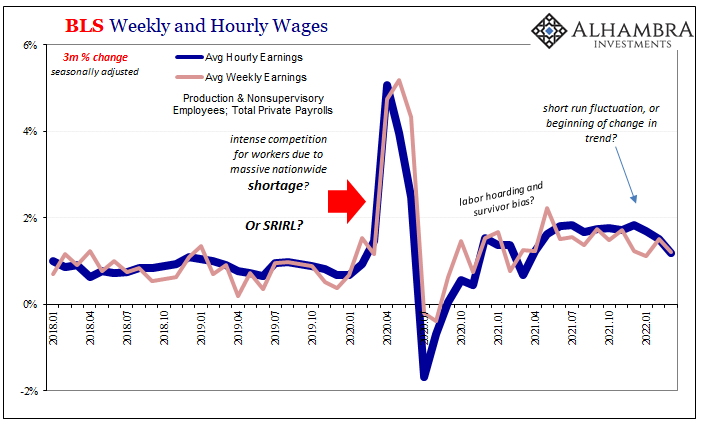 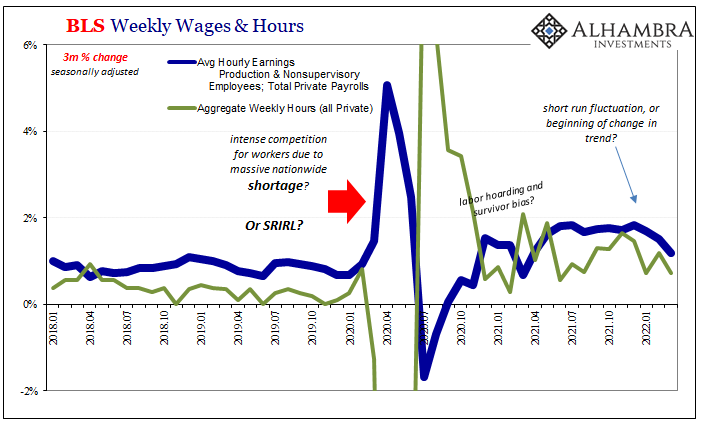 The only fly in the Phillips brand ointment just might be wages (and hours). As I pointed out last month, this “jog” is only short run, yet for another month there seems to be some slackening in average weekly as well as hourly earnings. For a labor market that the unemployment rate says is only heating up, already incredibly tight (that whole labor shortage idea), this would be an outright – and fundamental – contradiction.

By itself, even adding another month (and hours) to the potential trend change, this hardly provokes more than casual notice. If it keeps going, though…

That possibility, among many others further along the wrong macro path, have certainly gripped eurodollar futures like the Treasury market. At their current levels of inversion, I’m almost certainly wasting my time, and yours, going over another monthly issue of what likely will turn out to have been immaterial labor numbers.

Should those inversions prove correct, and then keep going even more than they have already, meaning market confidence over some increasingly bad scenarios, this along with the FOMC’s history of sticking to its stubborn ostrich policy accounts for just how distorted they’ve become.

Today’s BLS numbers only add to the same expectation; another month of employment figures that look just how the Fed’s policymaking committee wants them which means nothing in their right now forcing a U-turn. The complete 180-degree turnaround is almost certainly coming, yet with a perfect payroll report for March 2022 that policy inflection gets pushed further into the future. 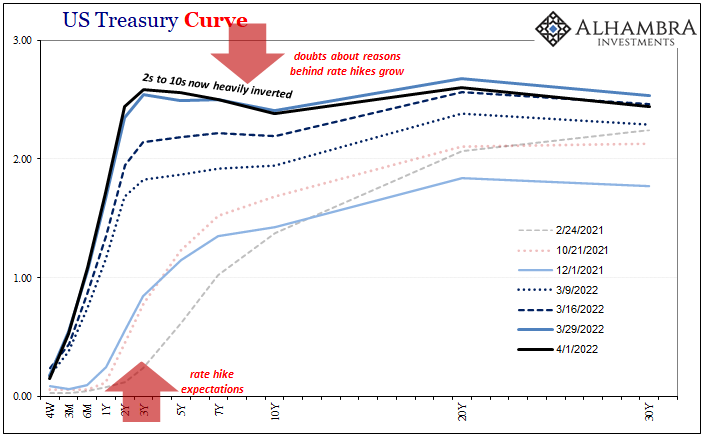 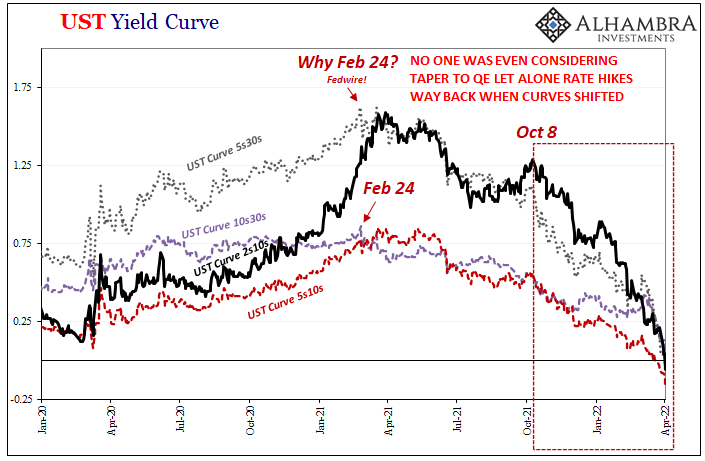 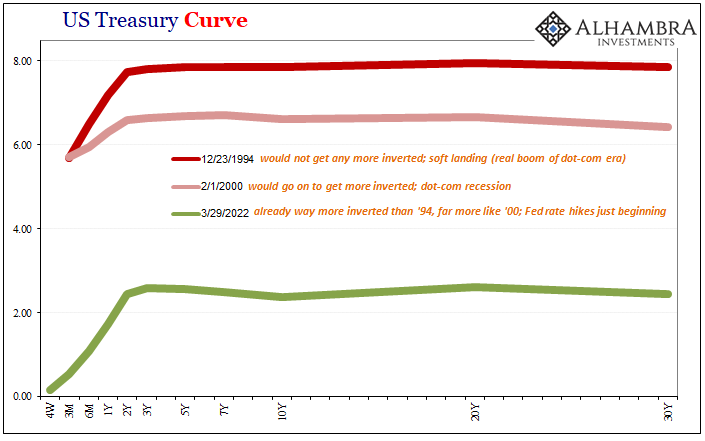 If nothing else, the ostriches, policymakers have proven just how much they’ll stick to their predetermined conclusions especially in the face of even monstrous market warnings (see: summer of 2008). Steep up front, more upside down in the back.

Had this perfect payroll report actually been more meaningful as it would pertain to actual longer run economic possibilities, it’d have worked out to steep up front, steeper in the back, too.

Euro$ futures started it, but now yield curve is monstrously inverted, too.

There really aren't many possibilities left to be priced into this mess. None that are any good. Recession.

About the only question left is when.https://t.co/1LhCqHgPat

In other words, the Fed didn’t really need any more from the BLS, it was going to continue its rate hikes regardless of today’s release either way. And the bond market is pretty darn sure the real economy’s trajectory is nothing like what the unemployment rate would plot, so the data wasn’t going to change any minds among bond betting.

Digging in on both sides, yes, the payroll report has been made totally irrelevant. Again.