If it continues to play out the same way, it would be all the worst scenarios lumped together all at the same time. A real unfortunate convergence, yet one that has been entirely predictable.

Consumers reaching their absolute spending limits. Warehouse and storage capacity nationwide dwindling to long-time lows, leaving firms no options to store inbound goods. And, of course, the stream of goods into inventory that shows no signs (yet) of letting up.

Taking the last one first, today the Census Bureau reported its advanced estimates for wholesale and retail inventories. To start with, the figures for March were already excessive; in retail, the month-over-month change (seasonally-adjusted) had been the second highest on record, behind only December.

The revision for March nearly doubled the monthly rate. 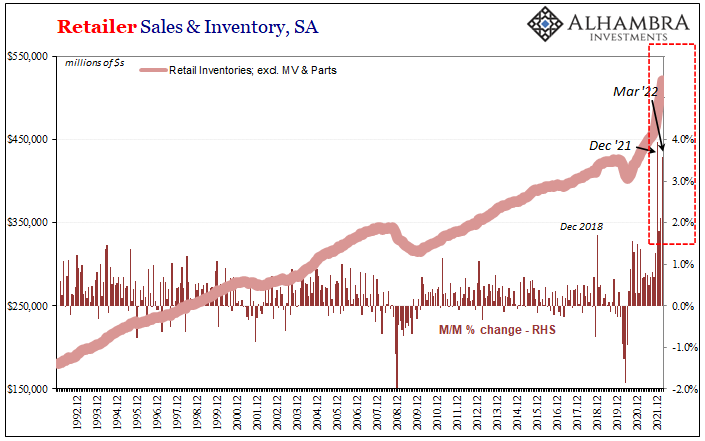 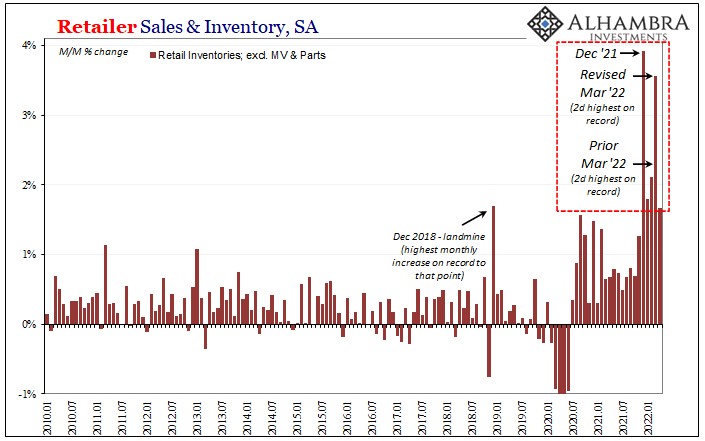 April’s updated 1.7% would’ve been the second highest on record if it had been April 2021, but now seems small compared these gains since October.

And, as noted before, it’s not all due to price effects. Using one form of deflating factor or another, whichever way you account for price changes the result is the same. There is an historic influx of actual goods on top of shipping bills, and it has been nonstop for retailers since October. 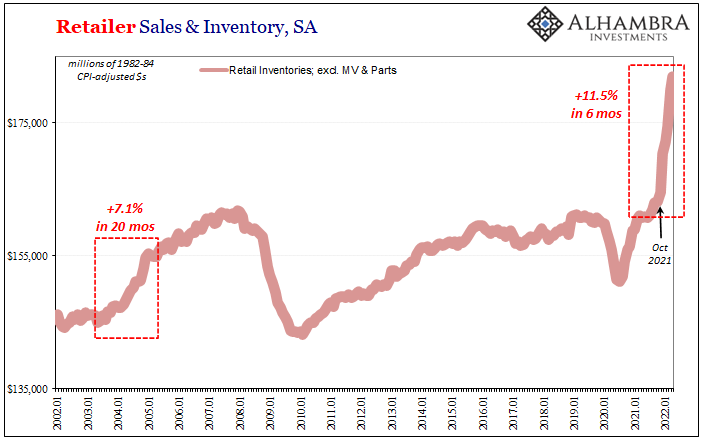 For wholesalers, the inventory flood goes back a few more months to last July. Like the retail level, wholesale is both real (price adjusted) as well as disproportionate. To put April’s advance estimate into perspective, while it gained 2.1% m/m that’s merely the sixth highest.

It also would’ve been second if not for those other recent four months (with March’s figure also revised significantly higher). 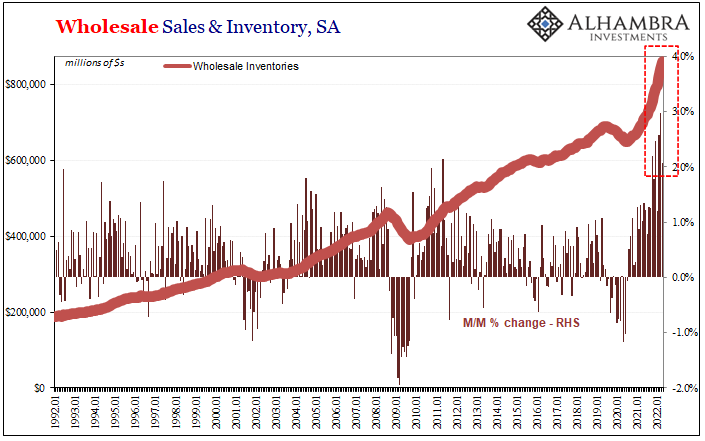 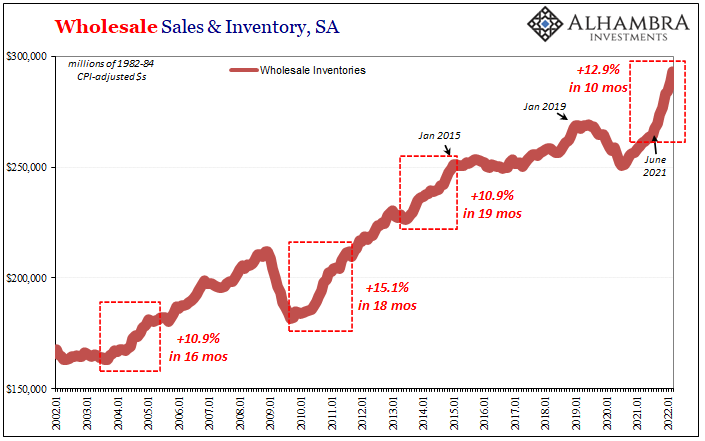 So, while goods continue to surge into the US supply chain, more and more it looks like consumers just may have exhausted themselves. Nominal spending is rising, but that’s just the price illusion harmfully redistributing what’s left of the economy after 2020.

Target and Walmart warnings in mind, now comes the Bureau of Economic Analysis with its personal income and spending data. The key on the income side, Real Personal Income excluding Transfer Receipts, was revised somewhat higher for recent months but still going nowhere.

Americans are earning more in their paychecks, collectively among the fewer who are working (compared to 2019), but it’s not keeping up with prices. Earning somewhat more, paying a lot more, all to get slightly less for the round trip. 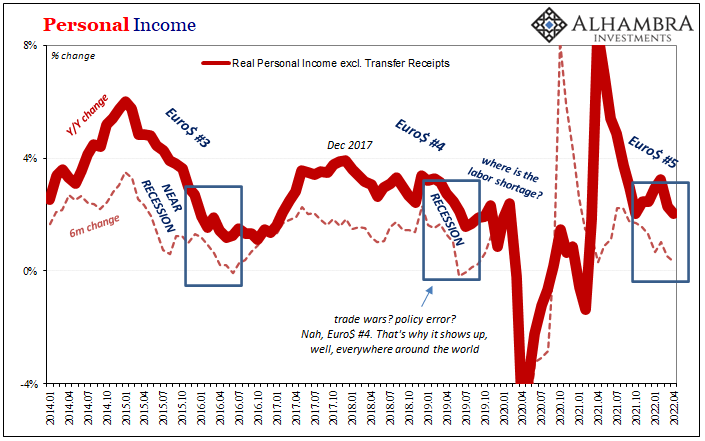 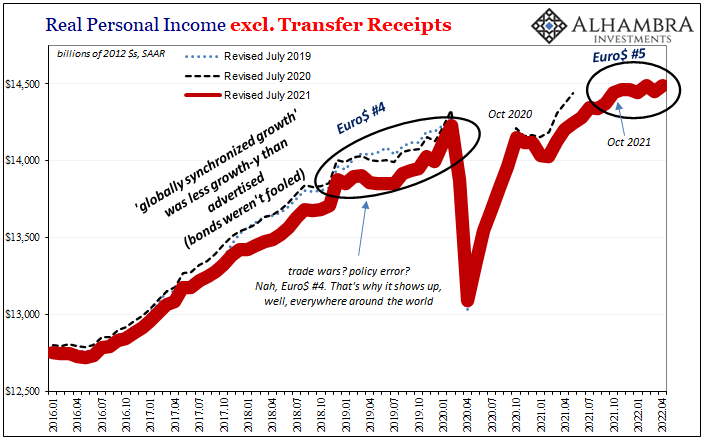 The most concerning part of today’s BEA release has to be savings; there is not much left to them. The Personal Savings Rate fell to just 4.4%, the lowest since the first part of the Great “Recession.”

It’s typical to find a low savings rate associated with the start of any macro contraction phase. The simple reason is there’s nothing left for consumers to support continued spending at the same rates, no margin for any perceived or real error.

The savings rate has tumbled because on the whole consumers/workers are paying more, getting less and not earning enough to make up the difference. Savings at these low levels, it tracks with what Walmart and Target had said last week about consumers trading down to lower cost items as well as scaling back on overall purchases.

There was always a limit to last year’s supply shock/helicopter trend, and savings like retailer warnings are a particularly worrisome sign the limit is near. 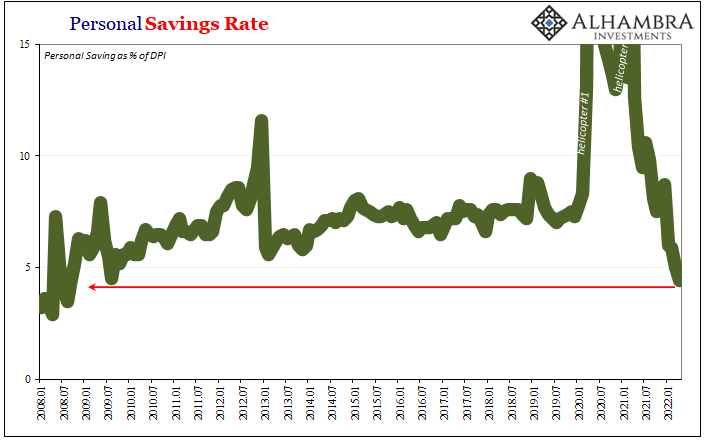 All that just in time for the historic flood of inventory, and no room at the warehouse for the weary goods traveled.

However, while all that new warehouse space is still under construction, U.S. industrial vacancy sank to just 4.2% in the first quarter, a 27-year low after declining another 130 basis points over the past year.

Those pressures have led to industrial space being essentially “sold out” in coastal locations near maritime ports, where renters now encounter double-digit rent growth in top markets like Southern California (up 18.8%), northern New Jersey (up 16.1%), and South Florida (up 15.8%).

While certainly a big problem for the domestic situation, the US consumer has been maybe the lone outlier everywhere in terms of activity over the past year, fourteen months (of data). Shopping online from overseas suppliers, the downside of the inventory cycle just might hit the rest of the global economy that much harder for lack of any momentum or alternative to American (over)buying.

There’s a reason why financial markets have gone curve crazy, several, actually, and this toxic stew of extremes sits (along with collateral scarcity) near the top of every list. And, as I started, it has played out entirely predictably.

Rate hikes? Even if they were anything more than symbolic, they’re just not needed. 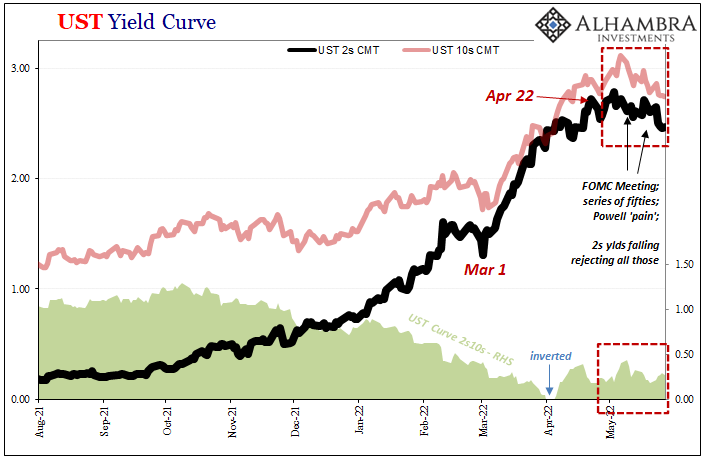 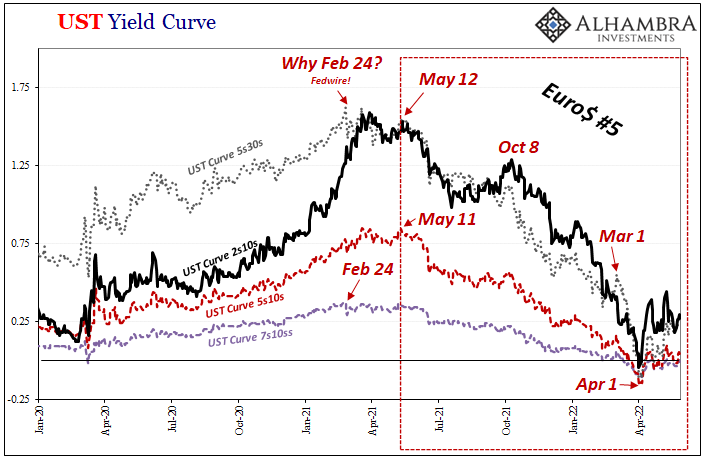