Dimon says brace for U.S. economic ‘hurricane’ due to inflation

“It’s a hurricane,” Dimon told a banking conference, adding that the current situation is unprecedented. “Right now, it’s kind of sunny, things are doing fine. Everyone thinks the Fed can handle this. That hurricane is right out there down the road coming our way. We just don’t know if it’s a minor one or Superstorm Sandy,” he added.

“You gotta brace yourself. JPMorgan is bracing ourselves, and we’re going to be very conservative in our balance sheet,” Dimon added.

SAN FRANCISCO, June 3 (Reuters) – Tesla (TSLA.O) CEO Elon Musk has a “super bad feeling” about the economy and needs to cut about 10% of salaried staff at the electric carmaker, he said in emails seen by Reuters.

A message sent to executives on Thursday laid out his concerns and told them to “pause all hiring worldwide.” The dire outlook came two days after the billionaire told staff to return to the workplace or leave and adds to a growing chorus of warnings from business leaders about the risks of recession.

It seems logical that CEOs of large, important companies would have a clearer view of the economy than the average Joe. But Jamie Dimon has been a one-man contrarian indicator my entire career. You could have made a tidy fortune just doing the opposite of his latest pronouncement on interest rates. And Elon Musk? I have no idea why he’s been bad-mouthing the economy over the last month but I’m certain it is in his best interest to do so. He said last month the US economy was already in recession and that it would get worse. He also said:

“Yes, but this is actually a good thing. It has been raining money on fools for too long. Some bankruptcies need to happen.

That I actually agree with although I do wonder if Mr. Musk owns a mirror. My guess is that his comments on the economy probably say a lot more about Elon Musk and Tesla than they do about the global economy.

In the Jamie Dimon article above, Reuters writes that uncertainty about Fed policy, the Ukraine war, supply chains, and rising Treasury yields have “rocked global stock markets” this year. But all of those things were uncertain last year too when the stock market was rising. We didn’t know when the Fed would start tightening policy, we didn’t know if Russia would invade Ukraine, supply chains were a mess and the 10-year Treasury yield rose from 91 basis points to 1.5%. Uncertainty is always high because the future is unknowable. What’s different now is that investors are more aware of the uncertainty because some of last year’s was resolved in a negative way. Russia did invade Ukraine, the Fed did hike interest rates and Treasury yields did climb higher. But if they hadn’t been resolved the way they were we’d be faced with a different set of circumstances with their own unique uncertainties.

Jamie Dimon says there’s a hurricane coming but he also expresses uncertainty about its severity: “We just don’t know if it’s a minor one or Superstorm Sandy”. He doesn’t know but he’s assuming the worst, that it will be an economic “Superstorm”. As does seemingly everyone else these days. The stock market isn’t down because of uncertainty; it is down because the commonly held belief is that all the current uncertainty will be resolved negatively. Our heightened state of awareness about uncertainty has us focused on the negative outcomes, assuming the worst-case scenarios will be realized. But we can’t and don’t know that. In fact, when uncertainty is perceived to be at its highest, is exactly when we ought to be thinking about the potential positive outcome. That isn’t the same as predicting the positive outcome by the way; just an observation that the positive outcome is likely mispriced.

I saw a tweet recently from an account with 55k followers that said: “Dip buyers should check out the Univ of Michigan’s Consumer Confidence survey. Ooof.” My first thought was, you really don’t know how this investing thing works do you? My second thought was, how the hell did you get 55k followers? The University of Michigan sentiment survey is a reflection of current views of the economy. If it has any value at all – and I don’t think it has much – it is primarily as a contrarian indicator; you want to be a buyer when it is already low. If you wait for it to rise, for consumer sentiment to turn positive, your opportunity to “buy low” will have already passed.

Likewise, our focus is on uncertainty. Right now, the uncertainty is primarily around future Fed policy. Everyone knows that the Fed has a history of hiking rates until something breaks, usually expressed as a recession. And they assume that’s what they’ll do again and I understand why they believe that. But we don’t know how the economy will progress in coming months or how Fed policy will adjust. Policy uncertainty is considered high right now despite the fact the Fed sends someone out every day to talk to markets about what they expect to do. Of course, what they expect is entirely dependent on their ability to forecast the future economy and their track record in that regard isn’t doing them any favors.

We even have a way of tracking economic policy uncertainty and like consumer sentiment, it is most useful as a contrarian indicator. “Uncertainty” tends to be highest at bottoms in the stock market.

August 1998 (Asian Crisis), September 2001 (9/11), March 2003 (dot com bear market bottom), January 2008 (Bear Stearns) September 2008 (GFC), July 2011 (European Debt Crisis), and May 2020. Most of those spikes in “uncertainty” corresponded to stock market bottoms. Not all of them and we wouldn’t expect that; risk does exist and worst-case scenarios do occur. But in general, when the index is high, one is usually rewarded by looking for opportunity rather than fretting about risk. You’ll notice the index just spiked and appears to have peaked again in April of this year. Not exactly the bottom but we are seeing signs the stock market is stabilizing and may have seen its worst. The ratio of new highs to new lows is starting to rise. Insiders are buying at an above-average rate. The percent of stocks trading above their 200-day moving average is rising, especially on the NASDAQ (that isn’t a recommendation). The dollar is showing some weakness, down about 3% over the last couple of weeks and not able to do much last week even with pretty good economic data.  That has helped non-US stocks; emerging markets (mostly China) outperformed the US last week by a good margin.

Inflation trades may also be starting to reverse. Commodities, with the exception of the energy complex, have stopped rising and the agriculture futures are looking particularly toppy. Large specs are pretty long across the board on commodities so a little weakness may go a long way. Futures speculators are trend followers and they can only get so long or short before things start to reverse. TIPS outperformed last week but the 10-year TIPS yield has stayed positive; the demand for inflation protection continues to wane.

I’m not saying that recession is fully priced into the markets. I actually don’t think it is. In non-recessionary corrections (bear markets, whatever) the average stock in the S&P 500 falls about 25% and that is, conveniently, right about where the average stock is today. In recessionary corrections (bear markets) the average stock falls about 45%. The non-recessionary correction has already happened. What are the odds of recession right now? I track a number of models and most of them put the chances of recession currently at less than 5%. The lone exception is the 10-year/2-year yield curve model which puts the chances at 17% (which is higher than it sounds). The other main yield curve model is the 10-year/3-month curve which currently puts recession chances at 4%. What I can say for sure is that all the models I track showed the chances of recession were much higher in January of 2020 than today.

Investors are hyper-focused right now on inflation, economic growth, and future Fed policy. Like Jamie Dimon, most investors seem to be assuming the worst, that an economic hurricane is about to hit the US and the world. Anything less than that outcome is going to surprise a lot of people. Maybe this is like September 2008 and there is more bad news to come; that can’t be ruled out. But you might at least entertain the possibility that what we’re seeing right now is opportunity and not risk. They look a lot alike.

The rising dollar, rising rate environment hasn’t changed although both are below their peaks.

Specs in the dollar index futures are about as long as they get, similar to the positioning prior to the last peak in early 2020. They are also very short the Yen and Pound but not the Euro so the picture is still mixed. I don’t expect a big move but a continued softening wouldn’t be surprising.

On rates, the 10-year yield is still below its peak and bonds are very oversold. I think a short-term bond rally is in the cards but the huge inflows to TLT ($7.7 billion over the last 3 months) does give me pause. There are a lot of traders expecting a rally in bonds. For now, the trend in rates is still up.

Note: This spreadsheet is set up to look at a trailing number of days so, for example, 1 week is 5 trading days. Since last week was a holiday-shortened week, the numbers here don’t reflect just the activity of the four-day week.

Large-cap growth is trying to lead the rally off the lows which makes sense as it was the hardest hit on the way down. I’m of the opinion that we’re in the midst of a long-term shift to value but that doesn’t mean it will outperform across all time frames. 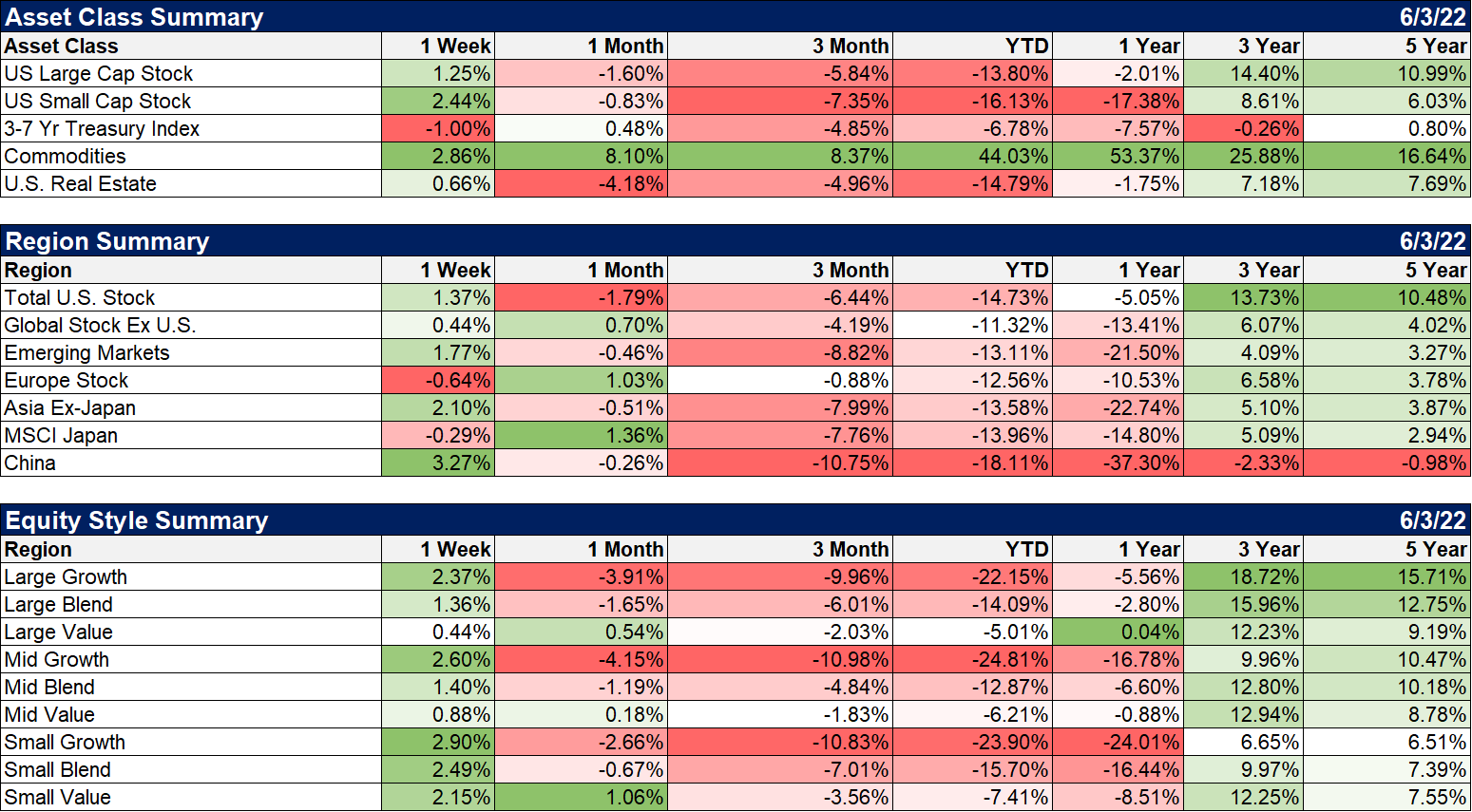 Looking at the last five days (below) shows a tilt toward cyclicals and other economically sensitive sectors. For the four days last week the only sector higher was energy.

I don’t know how today’s uncertainty will be resolved but I do know that the majority is focused on risk right now, on all the ways things could go wrong. That is mostly, if not fully, priced into the current markets. Anything short of a full-blown recession – and soon – is going to wrong-foot a lot of investors positioned for disaster. Opportunity would appear to be underpriced at present. There are parts of this market that are still likely to end up in the bargain basement but there’s also some high-quality merchandise on sale. Do you want to buy now or wait for full price?