A Triple Dose of the Real Fed

A Triple Dose of the Real Fed

Today was a wonder to behold, Jay Powell performing at his absolutely most Volcker-esque. The biggest single-meeting rate hike since ’94, a triple-dipper 75 bps, all because the Fed thinks the US economy most threatened by inflation. Total seventies vibes.

That’s not what invoked the myth, though. Instead, it was how just like his ancient predecessor, the current Fed Chairman is falling backward into recession. Paul Volcker’s early stint, no one saw contraction coming – either time.

Contrary to that myth which still today somehow claims inflation-champion Paul deliberately provoked two big recessions using monetary genius, the truth back then was nothing of that sort. Officials had no idea a recession was imminent let alone likely, neither of them, and were as much confused about the monetary situation as anyone today still is (because of this myth that just won’t die).

Channeling both the ’79 and ’81 Fed, Mr. Powell admitted, “We’re not trying to induce a recession.” No matter what they claim otherwise, neither was Volcker.

Out of the mess that was the early '80s, we're supposed to believe our best and brightest at the Fed bailed the country out of Great Inflation.

For anyone who missed Part 1 of our @EmilKalinowski Volcker Myth trilogy, here it is.

What's most compelling about this trilogy, including Part 3 when we get to it, is that you aren't taking our word for it.

The Volcker Myth is in *their* own words, publicly available. All @EmilKalinowski and I do is provide the context.

Staff projections throughout that long-ago period were the same, too, whereas in the early eighties prior to each recession econometric modeling only ever forecast a modest slowdown.

Four decades later, reminiscent of those old laughable projections, the current one says, via Powell, “There’s no sign of a broader slowdown.”

We see job growth slowing, but it’s still at quite robust levels. We see the economy slowing a bit, but there are still healthy levels of growth.

Nothing to suggest recession? No sign of a broader slowdown?

Yes, they have to put out these denials, to maintain confidence without risking the whole thing going off the rails (according to expectations policy). A little honesty, however, would go a long way toward maintaining a little dignity, to have any chance of reaching Volcker Myth status (Powell’s real goal, though he’s doing it wrong). 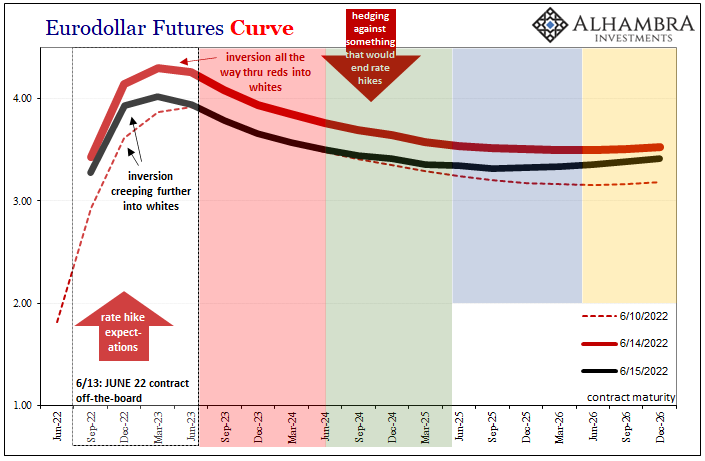 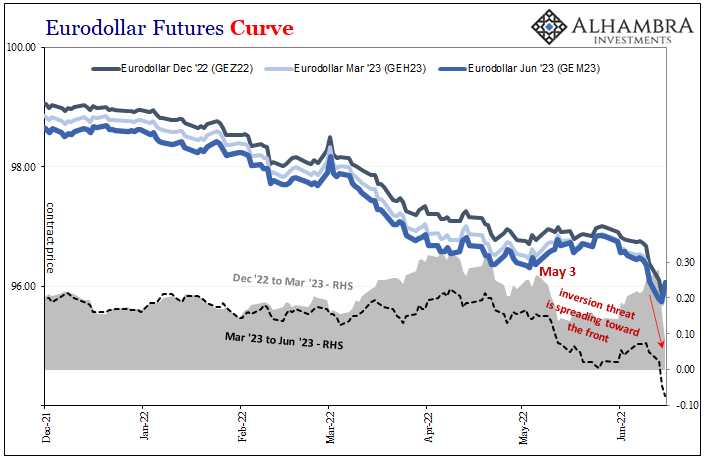 The entire bond market is screaming bloody recession since at least March, having worried about the very real risks – only to see them repeatedly confirmed – from way back into last year. Louder by the month, by the week, by the day. In fact, over the past few days the eurodollar futures curve has passed from inversion into its reds to inversion all red to now inversion in white then today nearly, just nearly the December 2022 (above).

Only a tiny bit away from eurodollar inversion in 2022 contracts. The market is increasingly confident recession is going to happen and is positioned for it more likely happening this year. The Treasury yield curve absolutely concurs, distorted and priced the same basically having moved on from hedging “if” to seriously hedging “when.”

The clock’s been ticking on it for a long time already. 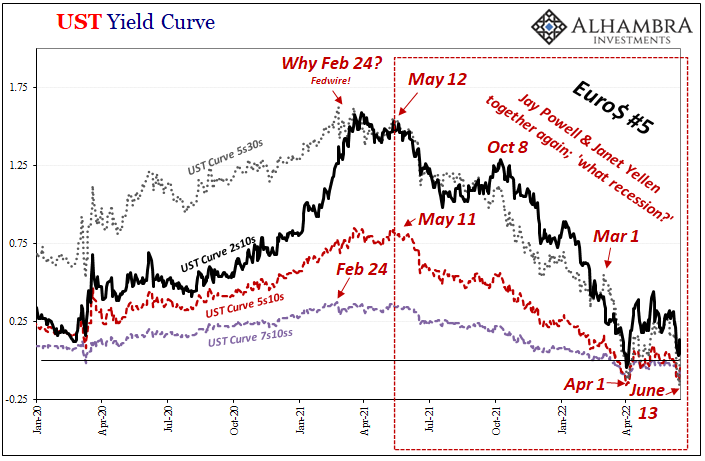 Fret not, though, Mr. Powell. Despite one egregious mistake after another, an unbroken chain of disastrous missteps misidentifying monetary reality, a menagerie of absolutely obvious incompetence year following year, Paul Volcker today remains a legend.

The Guy Who Defeated The Great Inflation, not who the guy who really was.

Today’s FOMC doesn’t need truth, or even any idea what the economy is doing. The current Chairman simply requires what all Chairmen since Volcker have; just what Milton Friedman had identified as the true power to the modern “central bank” right before he departed our current Earth which hasn’t contained one since before the eighties:

The greatest trick the Volcker Myth ever pulled was convincing the world there’s capability and coherence at the Fed. Prior to it, the institution was properly recognized as a universally-derided joke. Rather than change itself, those at the place instead set out to change our perception.

The FOMC and its rough models don’t see recession. As more time passes, not just markets, practically everyone else, anyone with common sense does.

It’s not one thing, it is everything. Jay Powell doesn’t see it? Like Volcker, he also sees nothing. It’s still the main requirement for the job.