It’s not recession fears, those are in the past. For much if not most (vast majority) of mainstream pundits and newsmedia alike, unlike regular folks this is all news to them (the irony, huh?) Economists and central bankers everywhere had said last year was a boom, a true inflationary inferno raging worldwide.

For once, CPIs (or European HICPs) seemed to have confirmed the narrative. Unlike 2018 when inflation indices kept policymakers and their forecasts out in the cold, 2021 sure appeared to be different.

Yet, it wasn’t. Apart from specific price behavior (supply shock, neither money printing nor an overheating economy), the underlying not-recovery pattern has repeated. Markets worldwide picked up on these key distinctions which, as usual, were never reported by any outlet.

Because of this, the current levels of, and more so the well-established now-accelerating direction toward, weakness is to those unaware as if something new has happened. Blindsided by downturn and more, suspicion can only be cast upon the “hawkish” Fed (or ECB).

What else could it be?

Not a single central bank had been anywhere close to its current position(s) way back in the middle of last year. Powell’s FOMC hadn’t yet thought about the word taper, let alone the idea of several fifties maybe seventy-fives rate hikes added to hastened QT. Those latter are brand new, but, again, economic weakness and market projections for downturn go back to when policymakers were still more concerned about, well, weakness than inflation.

Doubly if not triply-so for the Europeans. That’s what makes Europe’s careening toward recession so important to appreciate. The ECB is only just this month starting to move more “hawkishly”, yet just like the US and Chinese downturn theirs goes back to the middle of last year, too.

This thing is globally synchronized Euro$ #5, the only factor which ties everything together and can explain all the facts everywhere around the world.

Among those facts is a substantial further deterioration in sentiment first. PMI data for the US sank, as it has for European countries. Again, Fed vs. ECB, yet same result economy. 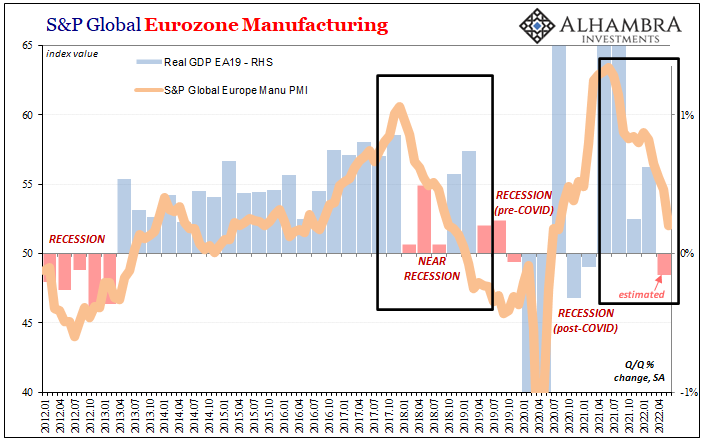 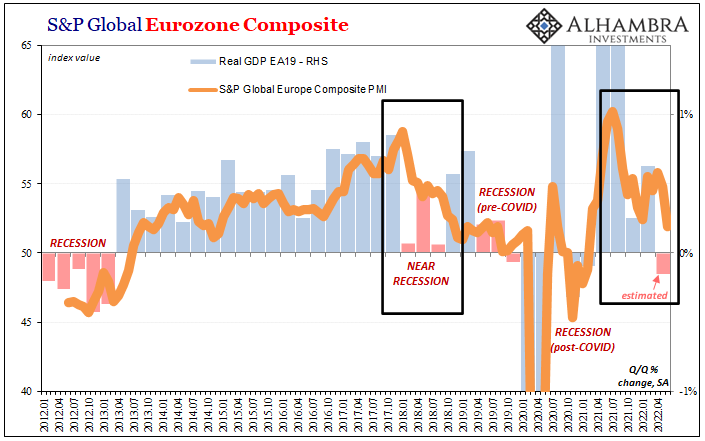 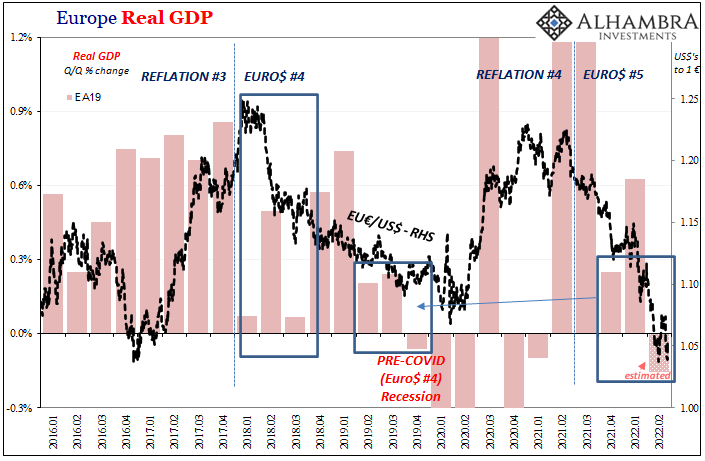 S&P Global said its manufacturing PMI for Europe dropped sharply like its US counterpart, down to 52.0 in June from 54.6 May. Not only was that the lowest since August 2020, the output index fell below 50 for the first time since 2020 while the one for new orders fell further below the dividing line indicating the future direction is lower still.

Their European composite fell below “omicron” afflicted January, though no pandemic panic to blame for this one.

That’s the thing about these indications; there are still those around who look at them like snapshots, focused on levels. In isolation, 52.0 for Europe doesn’t sound all that terrible. While it’s actually contraction territory, the more important and relevant emphasis is the trend and how quickly it has changed for the worse. 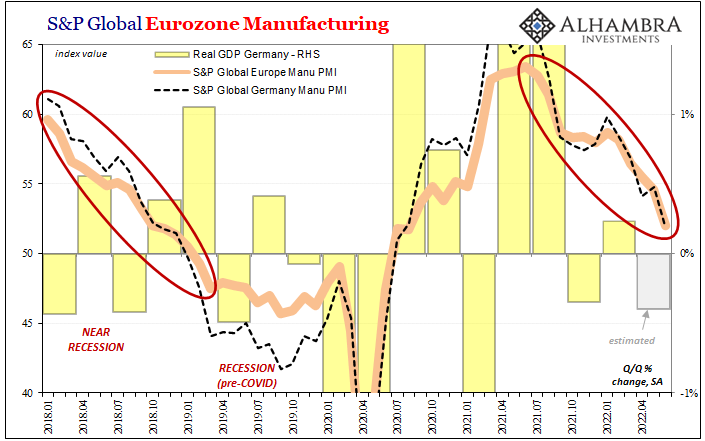 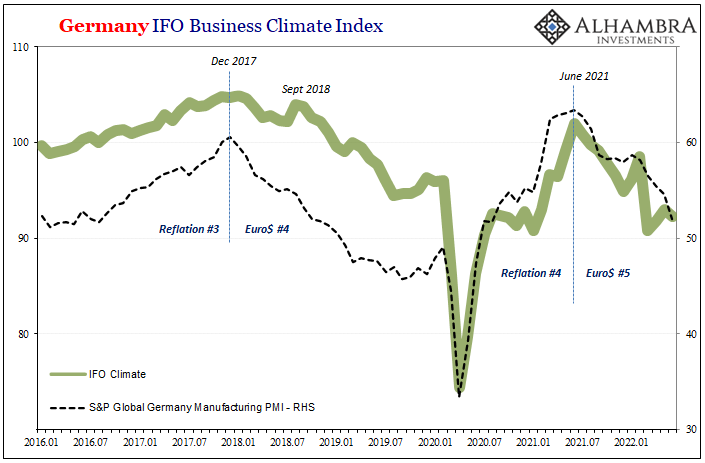 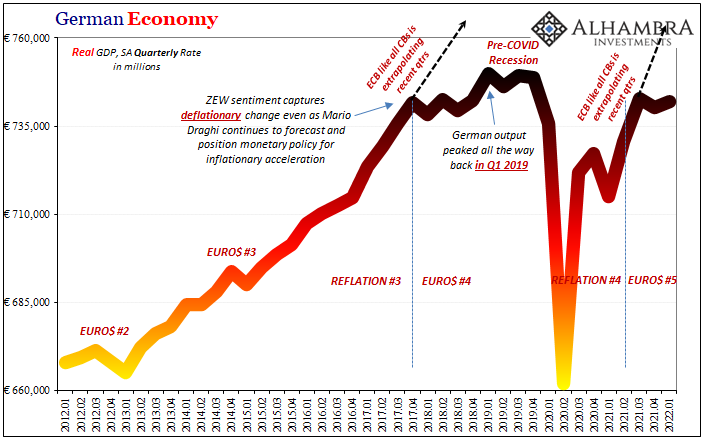 The same goes for Germany, and not just S&P Global’s numbers on its bellwether manufacturing sector. Whether the most recent IFO numbers, or Industrial Production (and factory orders), you can clearly see how the economic “headwinds” developed, substantiated, then worsened from all the way back to the middle of last year.

Recession prospects have been rising for about a year already, so what we’re seeing in the data is merely confirmation of those.

Yeah, that’s why markets like eurodollar futures are betting near certainty on how it will be policymakers, not the economy, who performs the U-turn. 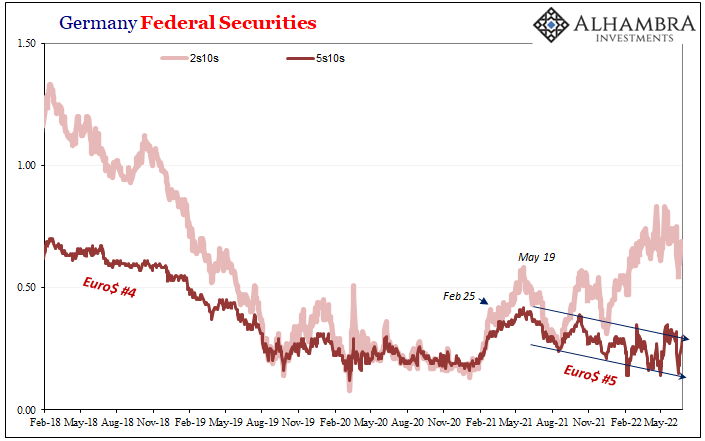 Again, it’s not rate hikes. The media is only blaming them because they’ve confused consumer price action for economic strength which was just never there. In that sense, what’s different in June 2022 is how more in the mainstream are aware “something” is amiss.

From all around the world, data in every corner, market prices all over the place, it’s globally synchronized Euro$ #5 that’s just now starting to get nasty.