Getting Whipped Will Really Hurt

Getting Whipped Will Really Hurt

The Federal Reserve’s various branches don’t just do manufacturing surveys anymore. This is a modern economy, after all, meaning industry isn’t the same top dog as what it used to be. While still important, and still able to tear down even the global-iest synchronized of growth-y, services are the big macro enchilada.

Reflecting this fact, there are now regional Fed services surveys producing services indices to go along with the manufacturing sentiment stuff. I’ll start with the one from Dallas for all of Texas because this one was released today with the latest estimates for June 2022.

In a word: worse. 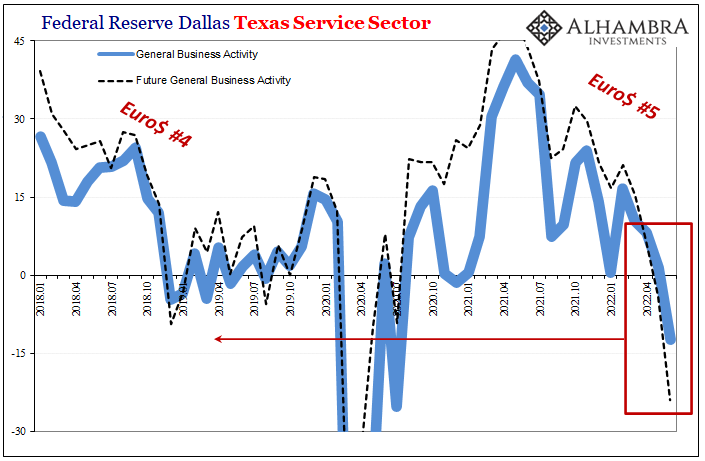 This is what recession would look like for all those Texans. But it’s not just the one region or the one economic sector, is it?

Not only are these numbers worse when compared to already-ugly and collapsing Lone Star manufacturing, these surveys were nowhere near as awful even in 2019’s pre-COVID contraction. The future index hasn’t been this low outside of the pretty severe recessions in 2020 and, yes, 2008.

You don’t need me to interpret this for you, about what that means for the near-term future. 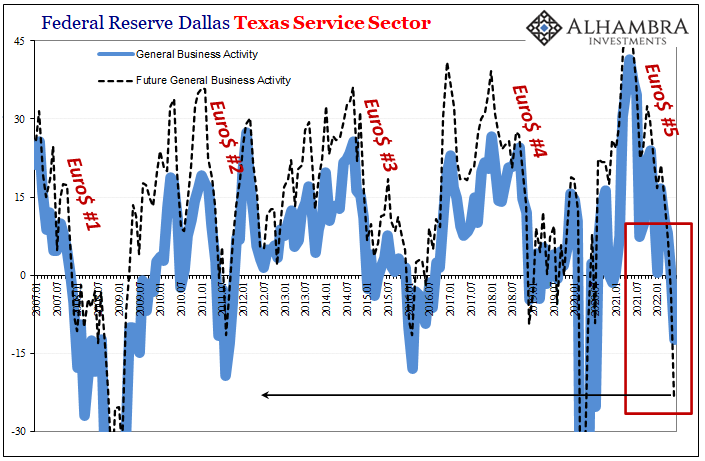 Demand in all cases, not just for goods and not just in one tiny corner of the world, is just falling apart. A multi-lateral plunge in consumer spending and future potential on all counts, from all fronts.

And this comes at the worst possible time for goods because the inventory is still piling up. While the Richmond Fed reported its New Order catastrophe and the Dallas branch released these stunning Texas drops, the Census Bureau piled on the recession figures with another incredible addition to the already-biblical supply chain’s inventory pile.

For one thing, the inventory of motor vehicles is starting to build in the retail segment after well more than a year when car dealers couldn’t get any; what awful timing.

Other retailers reported a much smaller increase in these latest estimates for the month of May 2022. On a month-over-month basis, ex-motor vehicles, retailer inventories “only” added 0.79% compared to 1.73% m/m in April which followed the (revised) epic 3.59% for March.

But nearly 0.8% in May only looks better when compared to all those months starting last October. This was still a sizable increase even if materially less than recently. 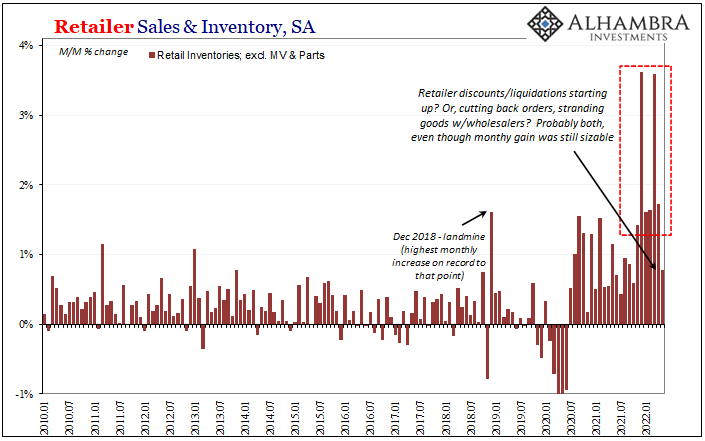 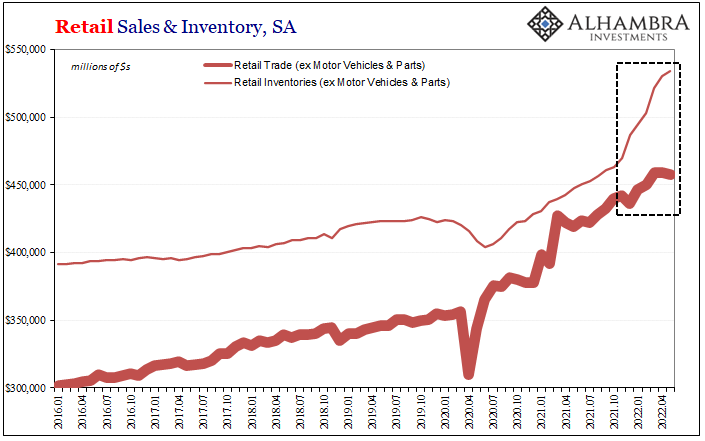 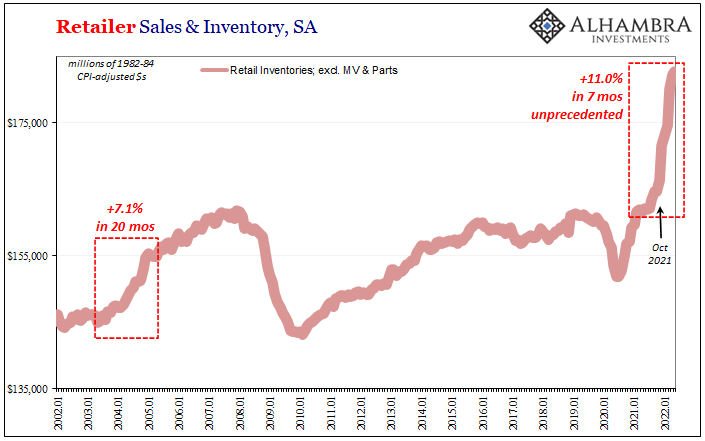 That’s the thing; are retailers starting to get a handle on inventory? And if so, just how are they doing it?

While this sounds like it would be a positive development, given the rest of the data it’s clearly not.

Discounting and liquidations are one way to reduce unsold stuff, which then might accompany the business cycle, bullwhip effect of sticking it to the other parts of the supply chain – which the Census data indeed confirms.

In other words, while retailers struggle to sell of what they have in their already-too-much pile up, they’re going to be cutting prices at the same time as cutting orders from wholesalers. 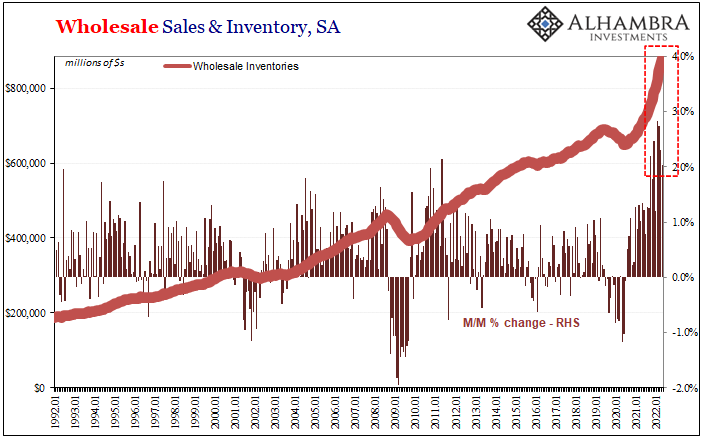 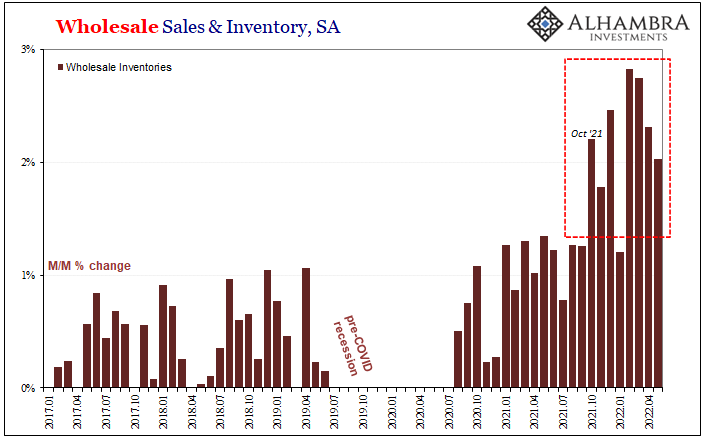 This doesn’t mean the inventory bullwhip gets solved, it just moves from one level to the next. Retailers appear to be in crisis-mode, which has left wholesalers holding the bag on the still-massive flood of goods. According to Census’ advanced May estimates, contrary to retail, wholesale inventories grew another stunning monthly amount.

Rising more than 2% m/m yet again – including motor vehicles! – May makes four months in a row at that unprecedented pace (and five out of the last six). The whip just may have started to crack retailers, which at first just makes it worse for wholesalers.

Who then make it even worse for producers – the bullwhip. 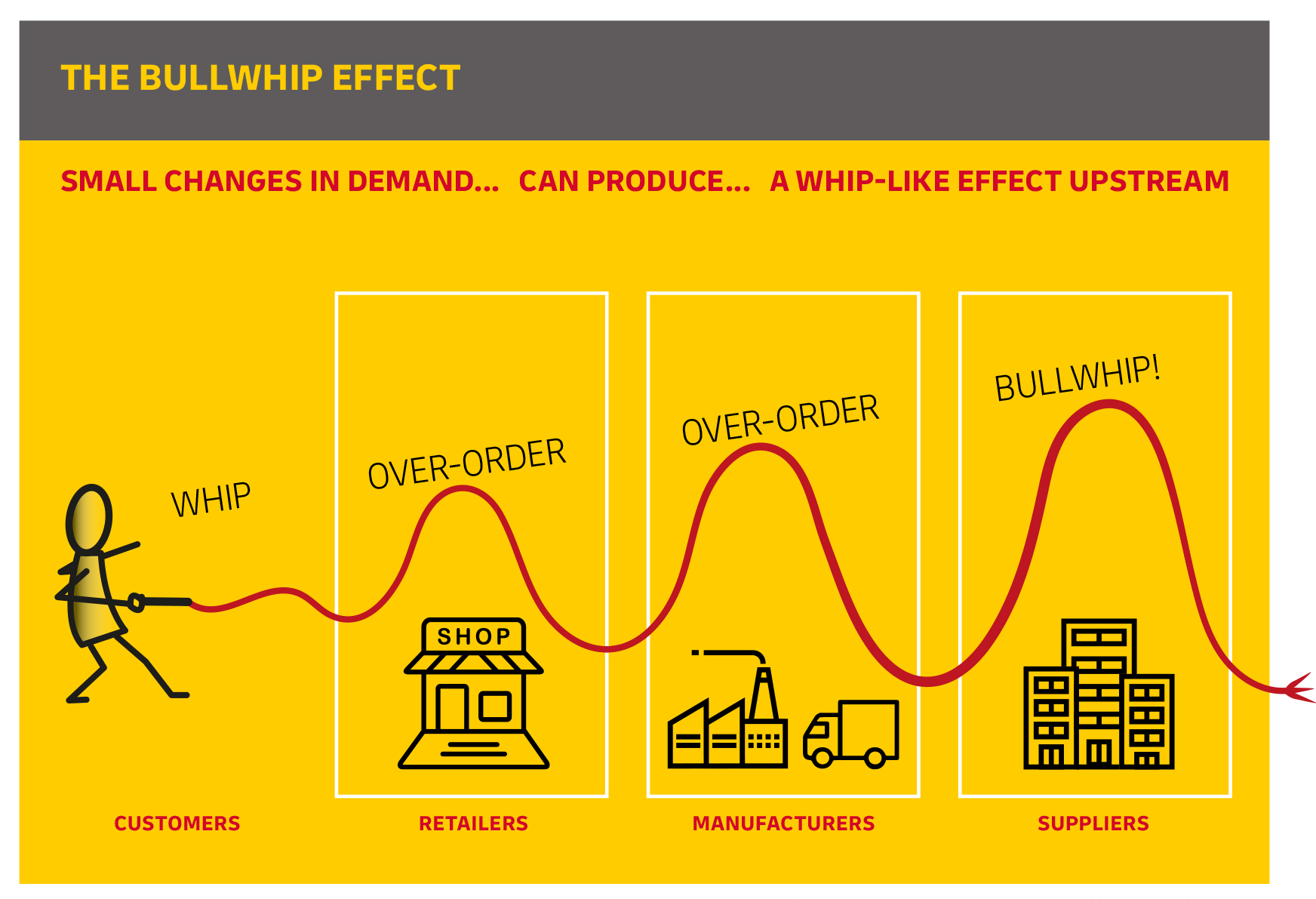 With these figures in mind, therefore production woes are piling up as much as goods have been. The deterioration in forward-looking new orders for production proportional to just how bad a situation this has become for wholesalers who maybe now can’t move any goods up to retailers.

And if the picture of future demand is as dire as some of these other datapoints (not just in Texas, consumer confidence everywhere including sales conditions worldwide) ominously indicate, that also accounts for the recessionary speed at which all these things are hitting simultaneously.

To recap by repeating from earlier:

This isn’t some modest macro downgrade; no garden variety slowdown would cause a wholesale (pun intended) change from ultra-hawk to rate-cutting and do it in a matter of just months! It’s not just recession what’s being served up and predicted, as more and more data confirms on both sides, supply and demand, it’s looking really nasty from here on.

While the rest of the world only now begins to make peace with recession, we’ve seen it coming the whole way. And now what we see from here is…even worse.