Leave It To Eurodollar

Leave It To Eurodollar

It was the laziest of arguments, saturated with desperation, too, the equivalent of waving around sophistry to answer for the painfully contradictory truth. Now that feces and fans are getting further acquainted, we have the necessary perspective to settle the matter once and for all.

The matter refuses to be settled, however; I mean, it’s 2022 and we’re still arguing these same issues which were, for all intents and purposes, conclusively established over the preceding several decades. All that’s been lacking is honest assessment.

To start with, Treasuries. The knock on these has been QE. In simplest terms (because there is no complication here), the Fed buys bonds particularly Treasuries therefore this at least muddies if not entirely spoils the fundamental yield curve signal. Proponents of this argument like to claim the UST market is all supply versus demand like that.

Then they fail to account for collateral as both a factor (the biggest one, at key times) for demand as well as a fundamental (deflation) expression.

Such was always nonsense; pure fallaciousness to try and soften the historically validated debunking of the inflation-4-eva-interest-rates-to-the-moon theory. Dollar crash, too. The easiest rhetorical trick in the book is to simply claim the smoking gun evidence has been tampered with by the police.

To a sympathetic jury (like unfortunate crypto), that’s all anyone needs to hear.

But it was never just USTs or the yield curve shape by itself. The flexing, flattening, even inversion is corroborated up and down the vast global money marketplace, and then corroborated again by everything in between from contrary currency behavior to a growing swath of legit data.

The most powerful and otherwise convincing to the open-minded among this other group, eurodollar futures.

No, says the sophist. Eurodollar futures is “just” market hedging – as if this makes it any less valuable fundamental information. Of course it is hedging! That is why we pay attention to it!

This non sequitur goes all the way back to Dudley, as in hapless Bill Dudley, the guy who as Open Market Desk manager the rest of the FOMC looked toward for answers during the Federal Reserve’s biggest screwup since the Great Depression. Basically, he had none.

MR. DUDLEY. …they advised me not to take what was going on in the Eurodollar futures markets literally because they felt that some of them were putting on these positions in case of a bad scenario that led to significant reductions in short term interest rates…An investor with speculative risk positions that would be vulnerable to economic weakness might hedge these risks by buying Eurodollar futures contracts. This hedging could push the implied yields on Eurodollar futures contracts lower than what would be consistent with an unbiased forecast of the likely path of the federal funds rate.

And the more the market sees “economic weakness ahead”, the more the contract prices “push the implied yields…lower than what would be consistent with” the Fed’s ridiculously optimistic, always-wrong forecast of the path for federal funds which never works out for them. Or us.

But!! the past is the past, they say. All year they’ve tried to claim this time is somehow different (I’m not making this up; their argument actually is “this time is different”). Sure, the Fed may have conceded 2019 to rate cuts rather than hikes just as the inverted eurodollar curve had priced more than a year ahead, but Jay Powell in 2022 has the 40-year high CPI to deal with.

In the parlance of wannabe technocrat-speak, the Fed’s “reaction function” has supposedly been categorically changed even from last year. The FOMC, it is being claimed, won’t be so easily swayed by a little bit of macro softening like it had been three years ago (as if 2019 was just a minor downturn).

Nowadays, they’ve got Volcker to live up to. 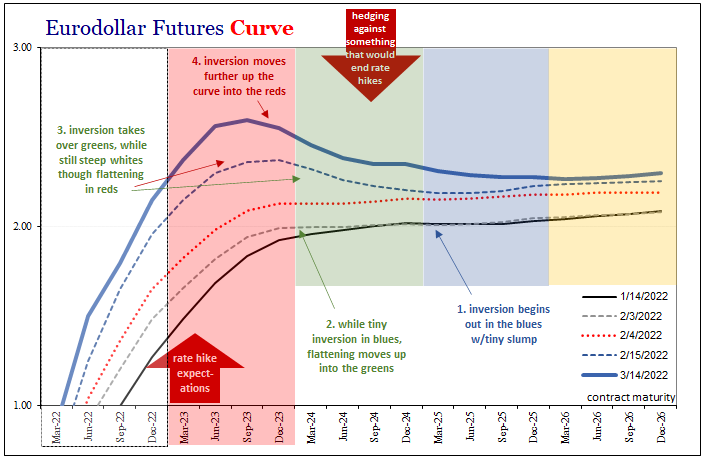 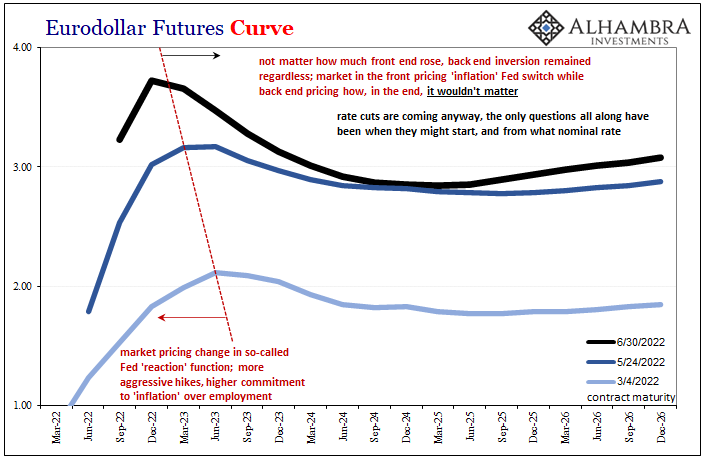 This, however, isn’t exactly a secret. Is there someone somewhere who doesn’t know this? I doubt it outside of markets let alone on the inside of those where hundreds of billions are being risked based on knowing all these things. In other words, the market has taken into account both the CPI and the very much altered “reaction function” the Fed is applying to it.

We can literally see the market take this into account as it developed in how the eurodollar curve has reshaped itself all throughout this year thus far. The outsized (for recent years) steepening up front in the whites and reds was the market repricing the FOMC’s determination to confront (or appear to) consumer prices, acknowledging that non-money monetary policy was becoming a one-sided mandate.

And it didn’t matter a single damn bit to the back end. As this same market priced inflation-hawk-Jay up front, no matter how steep it was pushed, the inversion remained the whole time and actually got worse in the back.

Furthermore, that inversion kept spreading closer and closer to that same front end as the weeks and months of 2022 have passed; to the point now, regardless of reaction function, the market is all but certain rate cuts are coming this year. 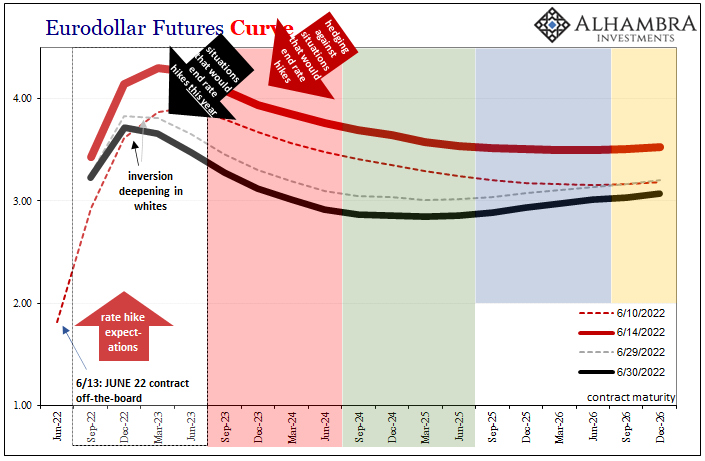 The market knows, is aware of, and has thoroughly evaluated how the Fed believes this time is different, but at the same time it is pricing how this time really is not.

As time has gone on, and we’re only halfway through this year, events are moving in the markets’ (all of them, including USTs, IRS, US$, etc.) direction. Just this week, decidedly so (see: commodities, crypto, stocks, you name it). More and more global data, too.

These “criticisms” of Treasuries and eurodollar futures weren’t real criticisms at all, rather the comically weak attempts of those addicted to mainstream Economics to magically wave away very public, very open, very easy-to-understand destruction of their preferred narrative(s).

Can't rely on USTs, they said. Fed buys bonds, or it's all about supply and demand. Bullshit.

Don't follow Euro$ futures, they said. While they nailed 2019 or 2007, the Fed is different this time. Bullshit.

All of it predicted by USTs & Euro$s.

Another FOMC meeting less than 4 weeks from now. 4w Tbill isn't even close to current RRP "floor" let alone what might be another 75 bps higher.

3m bill at 175 when there are two FOMC meetings in the next three months.

"It" is happening THIS YEAR

They aren't prepared. They think yield curve inversion is some formulaic slow move toward tomorrow-land.

It was never inflation. The dollar wasn’t going to crash. The biggest risk all along was the same risk, and that’s the monetary disease of eurodollar deflation.

Having spent lifetimes living under an outdated worldview, it is understandable if regrettable why people even professionals are so resistant to seeing the truth.

This is the eurodollar’s world, and we all have to find a way to live in it. This begins with understanding the first part of that statement, which only sounds easy. Since August 9, 2007, this has been incredibly difficult, made more so by those who just refuse to give up to the truth.